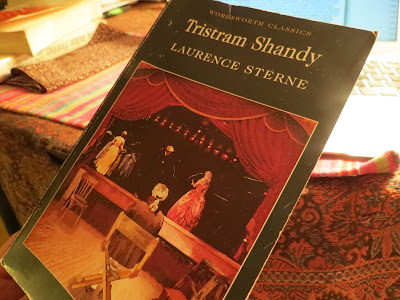 “Heat is in proportion to the want of true knowledge.”

“…that chapters relieve the mind….”

After a morning on snowshoes and a couple sessions snow shoveling, I was too worn out to meet with my reading circle. I hope hope they had a rowdy, cheerful, Shandeish evening, and I look forward to hearing about it! This morning, strength recovered, I was looking at dog-eared pages of my Tristram Shandy to see what passages (other than the short snippets above) particularly caught my mind, snagged my attention like burrs in a dog’s coat and still need twisting out. (Stern is contagious, isn’t he?) Chapter 21 of Book Three is one such:

— Inconsistent soul that man is! — languishing under wounds, which he has the power to heal! — his whole life a contradiction to his knowledge! — his reason, that precious gift of God to him — (Instead of pouring in oil) serving but to sharpen his sensibilities — to multiply his pains, and render him more melancholy and uneasy under them!

These observations relate directly and literally to Tristram’s father and the broken door hinge, but the wider application is clear, not only for his father but for all the world. Steve asked me on the phone about “lessons” Sterne gives us. Surely this is one! When the power to heal our wounds lies in our own hands, we should pour on the oil! Continuing to suffer needlessly — even using our mental powers to increase our suffering (“sharpen his sensibilities”) — is a refusal of God’s gift to us of knowledge. Sigh! I’m afraid I am particularly guilty of this foolishness when awake in the wee dark hours. Ah, the inconsistent soul!
The very end of Book Four contains the passage I referred to in a previous blog post but hadn’t the patience to go back to find at that time. Sterne tells us what Shandeism is and how it

opens the heart and lungs…, forces the blood and other vital fluids of the body to run freely through its channels, makes the wheel of life fun long and cheerfully round.

It is in the next paragraph that he describes the kingdom he would choose, if choose he might: “a kingdom of merry laughing subjects.” He adds that, in this kingdom of his, the subjects should be “as wise as they are merry” (not using their reason to multiply their pains, I take it), which would make him “the happiest monarch, and they the happiest people under heaven.” In a way, I think you might say that readers of the book, while they are engaged in reading it, are the merry laughing subjects Sterne imagined, that in his novel he has created his kingdom for our happiness. Does this seem too large a claim? I think it is what I felt as I began to enter the spirit of the book and looked forward every night to re-entering its world. Steve asked what I most enjoyed in the novel, and that is my considered answer this morning.
Finally, there is a long, long section titled the author’s “Preface” (though it appears between Chapters 20 and 21 of Book Three!) that addresses the author’s intention in a different manner, placing it more directly in contrast to the foolishness of the “civilized” world — but here allow me, like Sterne, to interrupt myself, because I turned back from the Preface to the Introduction to see what light Cedric Watts might shed on a part of the book that seems so important to me, and there I was grievously disappointed!
Why my second reading of the Introduction by Watts disappointed me: It had seemed so helpful before I read the novel, and so it is in terms of literary history, but as I go back to it now I find his analysis of the novel itself tedious and often downright clumsy. For example, he goes on and on about ‘frustrated or impeded communication’ and ’threatened potency,’ and he seems to feel the need to translate ‘hobby-horses’ for us! How insulting! And how peculiar is this passage:

He [Sterne] frequently addresses the reader, who is variously regarded as female, male, and multiple….

Well, for heaven’s sake! Why would the author not imagine such a variety of readers?
Back to the Preface, though (which begins on page 85 of our Wordsworth Editions paperback). Sterne begins by referring to wit and judgment: all that the Creator gave him of both he intended to put into this book. Next he quotes his critics and imagines all of them, himself included, writing with every possible particle of wit and judgment. “Bless us! — what noble work we should make!” But no, on second thought he realizes that with the flowing of so much wit “we should never agree amongst ourselves” and thus would issue “nothing but mischief among us….” Ah, but then the fountain of judgment would surely mend all the discord!
From page133 on I grow dizzy! Musicians and artists, statesmen, physicians, judges, clergy — all writing books, all blessed with every possible drop of wit and judgment! What a nightmare! — We may skip to the analogy of the two knobs on the back of the chair frame, the most ornamental parts of the chair. Well, of course they are Wit and Judgment (what else could they be?), and one knob without the other, the author writes, would look ridiculous, so it is better to be without both than to have one and lack the other. Poor John Locke! Did he lack wit? Do we truly judge those most lacking in wit to be graced with the highest judgment?
Well, not Richard Sterne, that's for sure. No one can say that he lacks wit -- or judgment, either. His wit shows us where our judgment fails — e.g., not fixing that door hinge! — and his judgment reminds us that wit will restore our merriment and keep us happy and well balanced, despite the idiocies of the world.

*****
[Note to Facebook friends wondering about realism and how it differs from other kinds of fiction: In this regard, the Introduction by Cedric Watts is very helpful. Watts traces the development of the novel back to comic and satiric literature, then sees the branching off of realism and romance (two distinct strains), with clear distinctions between Richardson’s didactic realism and Fielding’s satire. Tristram Shandy jumps the realism fence over and over: “In Tristram Shandy, both the inner, fictional world of the narrative (telling of the characters’ inter-actions) and its outer, discursive world  (In which the narrator parades his personality and narratorial difficulties to us)” — well, then, here Watts gets back into his ’threatened potency theme,’ a theme he claims connects the fictional and the discursive, but you see by the two worlds of Tristram Shandy is not a novel in the strict realist tradition. When we read a realist novel, we enter into its world; Sterne continually reminds us that he is making up that world as he goes along. Does that help? Please remember that I was never an English major! And please any proof-reading errors, too!] 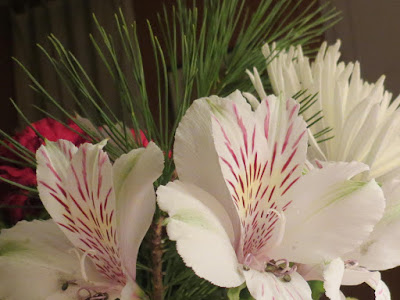