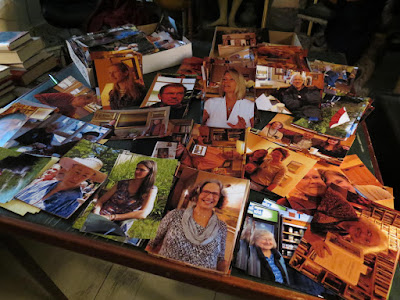 I’m still getting e-mails from customer friends about treasures they discovered in my bookshop. Sometimes I remember the book or books purchased but not always; often I’ve forgotten something that still glows in my customer’s memory and holds a cherished place in that friend’s home library. Here are some more stories of treasures found:

Just LOVE Frank and Lucky Get Schooled! We leave it in our guest room so everyone who visits ends up loving it, too. A boy and his dog, and what the dog teaches him. How much better can you get than that? And with the always honest-as-an-apple illustrations by Lynn Rae Perkins, who is double-blessed with word and image genius.

Possibly the coolest and spookiest discovery I ever made at Dog Ears Books was a used copy of a book I had as a kid called McCall's Giant Golden Make-It Book of Crafts and Activities.  It was published in 1953.  I took one look at it merchandised atop a shelf of children's books and my whole childhood flashed before my eyes!

I think I made every project in that book.  I'd lost track of my original copy but it was probably in tatters anyhow.  So the Dog Ears copy was certainly meant for me.  Thanks for the memories and thanks for the fun

I, too, have a number of great books that I discovered in your shop.  My discovery of the Joseph Heywood mysteries was at Dog Ears. Snowfly is so far the absolute best of his books.

Then there was the chance to meet Louisa Lang Owen, Eric's mother, and read her amazing story of her childhood as a casualty of war.  I will never forget her charming personality.

There are many more books, such as John Mitchell's Grand Traverse the Civil War Era, and other histories that I have found at Dog Ears.

How lucky we are in Northport to have access to so many new and used books. Not many small towns have this luxury.  Happy Holidays.

I can’t remember if it was my first or second visit to Dog Ears a few years ago after my wife and I took possession or our cottage north of Northport.  I gravitated to the philosophy and religion section.  I’m a college professor and lately have been reading a lot and writing a bit about comparative religious philosophy.  I found there a small, truly exotic text for any bookstore, let alone, I thought, one in Northport, Michigan, at the tip of the Leelanau peninsula.  The book is Traditions of the Seven Rsis by an English Scholar, John E. Mitchiner, and published by the eminent Indian publishing house Motilal Banarsidas.

That text opened at least three worlds, at which I still marvel.  The first is the world that is the subject of the book, the world of the classical Vedic era in ancient India. The seven Rsis play a central role in the mythology of that period and the continuing cosmology of Hinduism.  They are regarded as “mind-born” sons of Brahma, third in the triumvirate of Siva, Vishnu, and Brahma, the creator God.  They aid Brahma in the creation of the manifest world, are progenitors of races of men on earth, and are the source of the knowledge of the Vedas, the foundational scripture of Hinduism.  They, or at least some, are thought to reappear regularly as needed in the cycles of time to keep alive the knowledge of the nature of the inner-most Self and all of creation as nothing but the play of a primordial field of pure consciousness.

The book is based on Mitchiner’s dissertation and is a painstakingly thorough account of everything ever written about the Rishis in the dozens of diverse texts that make up the tradition.  Because of the central role of the rishis in the founding stories of Hinduism, Mitchiner’s account immerses the reader deeply into the very complex and colorful fabric of Hindu mythological history.

But Mitchiner’s own story is yet a second fascinating world that may no longer exist.  After being awarded his PhD from London University, Mitchiner spent a couple of years continuing the research that led to the book.  After that, though, he spent a career in Her Majesty’s Diplomatic Service as an Ambassador.  This is the world of aristocratic England where a scholar could become a valued member of the diplomatic service and a university education in the humanities was held in esteem as cultivating a sophisticated outlook and manners, a view in very short supply in our world now dominated by STEM studies and narrow careerism.
The third world is the world of Northport.  Who in the world owned this exotic text and brought it to Dog Ears for Pam to buy and put on her shelf?  I imagine another college professor, retired moving to the Northport area, maybe downsizing a bit to a cottage, maybe with a spouse who always thought the library was a bit cluttered in any event.  I hope that person thinks of this book from time to time and smiles, happy to have read it, maybe a little sad that it’s gone.  I can assure him or her that it was adopted into a good family and I’m grateful for the worlds it opened.

Now I just have to get the Christmas tree in the stand and upright! Remember, big doings in the village tomorrow (Saturday), including -- what more could you ask? -- horses!

Had intended to close with a photo of tree lying on bookstore floor, but my camera battery pooped out (hence the recycled image at the top of this post), and the charger is at home. Maybe tomorrow, tree standing up? Stop by in person and see!

P.S. Got it up! Squeezed another shot out of camera battery! Stop by, anyway! 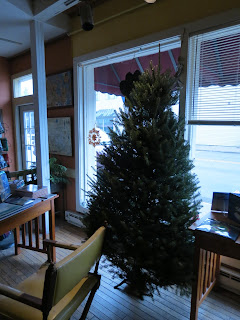