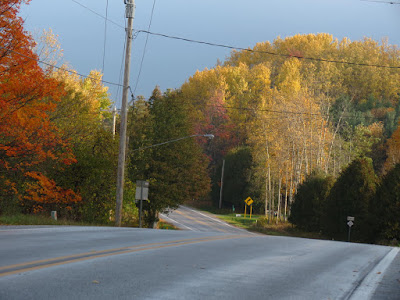 It was at just that season of the year when two events which are dear to the speculations of the American had absorbed the public interest. These events were baseball and politics, and at that moment both were thrillingly imminent. The annual baseball contests for “the championship of the world” were to begin within another day or two, and the national campaign for the election of the American president, which would be held in another month, was moving to its furious apogee of speeches, accusations, dire predictions, and impassioned promises. Both events gave the average American a thrill of pleasurable anticipation: his approach to both was essentially the same. It was the desire of a man to see a good show, to “take sides” vigorously in an exciting contest—to be amused, involved as an interested spectator is involved, but not to be too deeply troubled or concerned by the result. -      Thomas Wolfe, Of Time and the River

Thomas Wolfe has a lot to say in this book, edited down by Maxwell Perkins to a readable 899 pages, but by the end of Part I he has said not a word of Halloween, a holiday of fun undoubtedly restricted to children in the years immediately following World War I (the time period of the novel quoted above). Passages on train travel, however, are thrilling, especially to one who can remember, if only just barely, riding in a Pullman sleeper car as a young child. Happy memories and comfort books -- that's where my fevered mind has sought relief. I'm reading Time and the River for the first time and don't expect it to be bowl of mashed potatoes and gravy, but the poetry of the language and the author's Proustian willingness to stay with a scene are certainly voluptuous reading pleasures. 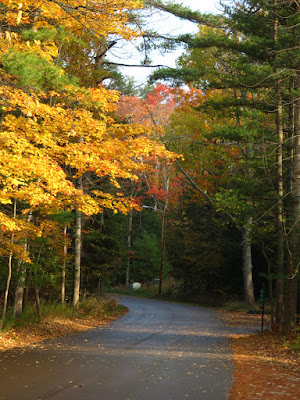 Politics and baseball? Well, the World Series has certainly been exciting without being, for me, in any way unnerving, but I cannot say the same of Halloween or the presidential election. Amused by this campaign season? Not too deeply troubled or concerned? I can’t say that. Can you? Now Halloween, at least, is past. For me, that's minor one down, one much greater trial to go....

But rather than close on a deep-sounding note of anxiety, I want to leave you today with Thomas Wolfe’s words of appreciation for his editor, surely one of the most effusively grateful dedications in all of American literature:

A great editor and a brave and honest man, who stuck to the writer of this book through times of bitter hopelessness and doubt and would not let him give in to his own despair, a work to be known as "Of Time and the River" is dedicated with the hope that all of it may be in some way worthy of the loyal devotion and the patient care which a dauntless and unshaken friend has given to each part of it, and without which none of it could have been written.

Wow! That's what I call gratitude! 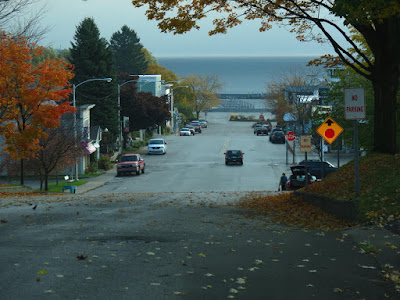 One of my readers who receives Books in Northport by e-mail and has a hard time posting comments sent me this e-mail message:

"Oh, my God......how I loved Thomas Wolfe! I think I was in love with him from the time I first read 'The lost Boy." On our first trip to Florida, my new husband and I took a side trip to visit Wolfe's childhood home in Asheville North Carolina I think).. We had to track down the woman who opened the place and served as docent, but we were rewarded by a very personal and detailed tour. I was almost in tears seeing the rooms I knew so vividly from 'Look Homeward Angel.' Histrionic as I tended to be, I often sobbed that I wasn't alive to breath the same air as he did. Well, I was young and intense.

"Your post has inspired me to take out my old copy of 'Look Homeward Angel.' I've tried rereading it over the years, but the writing style is too heavy for me. What was so endearing to me then seems cumbersome and overly dramatic. Writing has become much more sparse over the decades, prompting emotions rather than laying them out on the table like filleted fish. We now try to evoke feelings in the readers rather than spelling them out. Wolfe didn't really care if the reader felt what he felt.........he just spilled his guts. And I loved him for it. 'Of time and the River'...............oh, man......... '............and he knew that he was little...' It gives me goosebumps just to think of it.

'Thanks for reminding me of him. Cheri"

Thank you, Cheri, for reading and responding. I'll admit I had the feeling in the opening pages of OF TIME AND THE RIVER that it was "overwritten," but then I detoured around that niggling postmodern objection and let myself sink into the long sentences and histrionic, youthful responses of the writer to his world. We were all young once, but very few of us wrote eloquent, lasting, classic American literature, and I'm glad -- as I can tell you are, also -- that Wolfe did.

On a completely unrelated note, you can visit the blog of a retired librarian to see what she made of her first visit to Dog Ears Books: http://reddeverywhere.blogspot.com/2016/10/i-dogear-books.html
It's fun to discover new corners of the blogosphere -- and to find myself in one of those corners, well, that's a trip!

And here I am back again to share another e-mail message, this one from Carol:

"Ah, so someone else has problems leaving comments on Blogger too! Hopefully this will go through; if not I'll also send it as an email.

"As we are all caught up in the day to day angst of this particular political (and sports) season, it's so wonderful to be reminded of the timelessness of such concerns. Though caught up in his own details, Wolfe steps back enough to compare two very different worlds. Maybe in his time, baseball and presidential seemed more related (and civilized), but I doubt it. Every four years we think "how can our political discourse get any worse?" And every four years, we are newly surprised. Fortunately, the Cubs are proving that history does not have to determine our future, so maybe their inspiration will carry over into our politics."

There is an optimistic person!