Looking at It From the Other Side

Do you believe there are two sides to every question? Sometimes I think there many more, and often (though not always) I see one way of looking at a question as yielding a much fuller explanation than “the other side.” The question I raised the other day, however, was no metaphysical dilemma. Is there water at present in some part or parts of the Willcox playa? The answer would clearly be a fact, and the fact is now in my possession! But first, another story.... 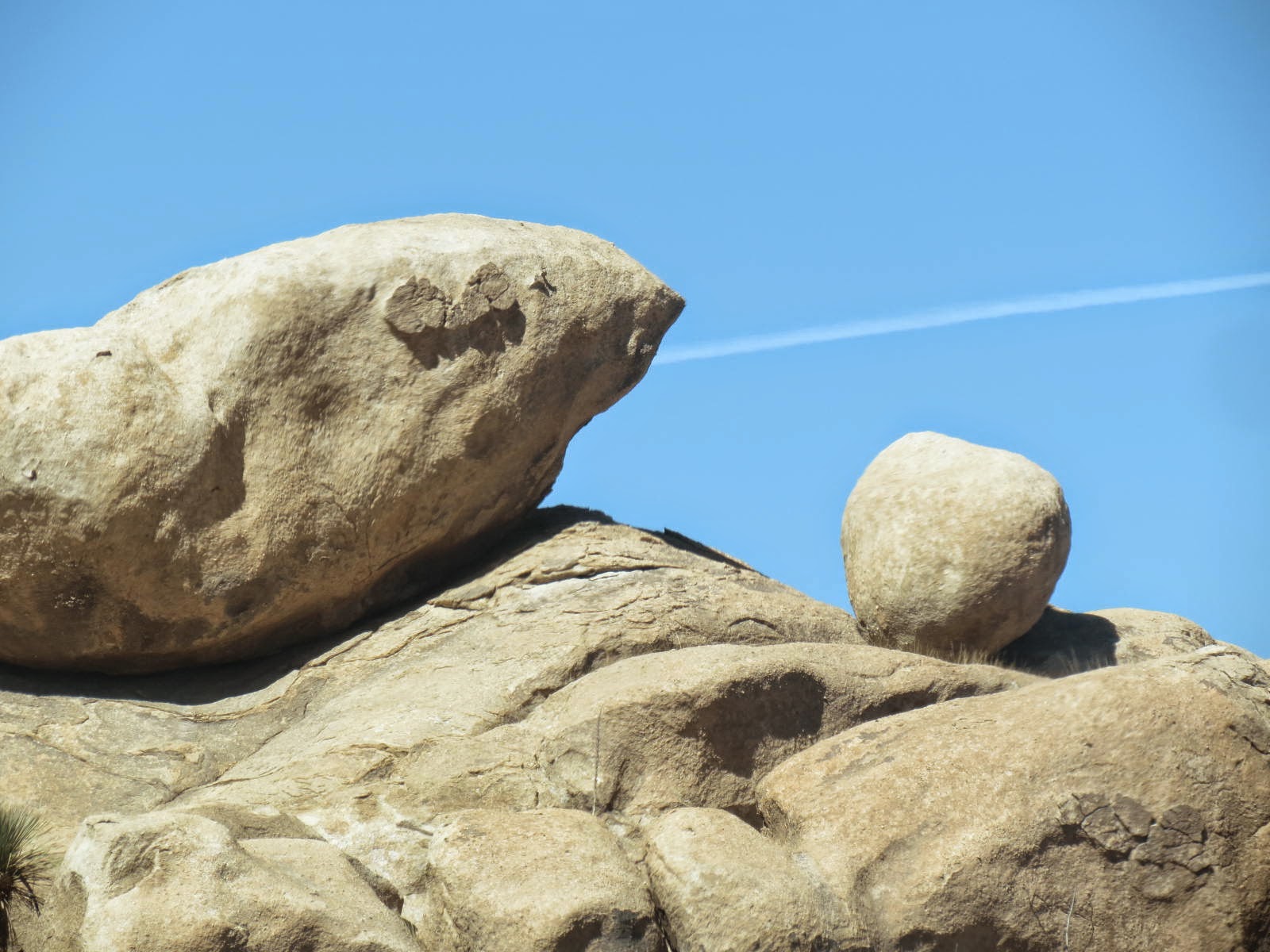 We were coming home via side roads from a little expedition over to Benson and, on the way, our first but long-planned visit to the Amerind Museum. (The Museum merits a post all its own, but owing to what came afterward it will have to share the limelight today.) The Amerind is a private museum of Native American archaeology, founded in 1937 by William Shirley Fulton, and its collection houses pieces from both North and South America, those from prehistoric sites as well as modern Native American art and culture. Associated with the museum is the Fulton-Hayden Art Gallery. 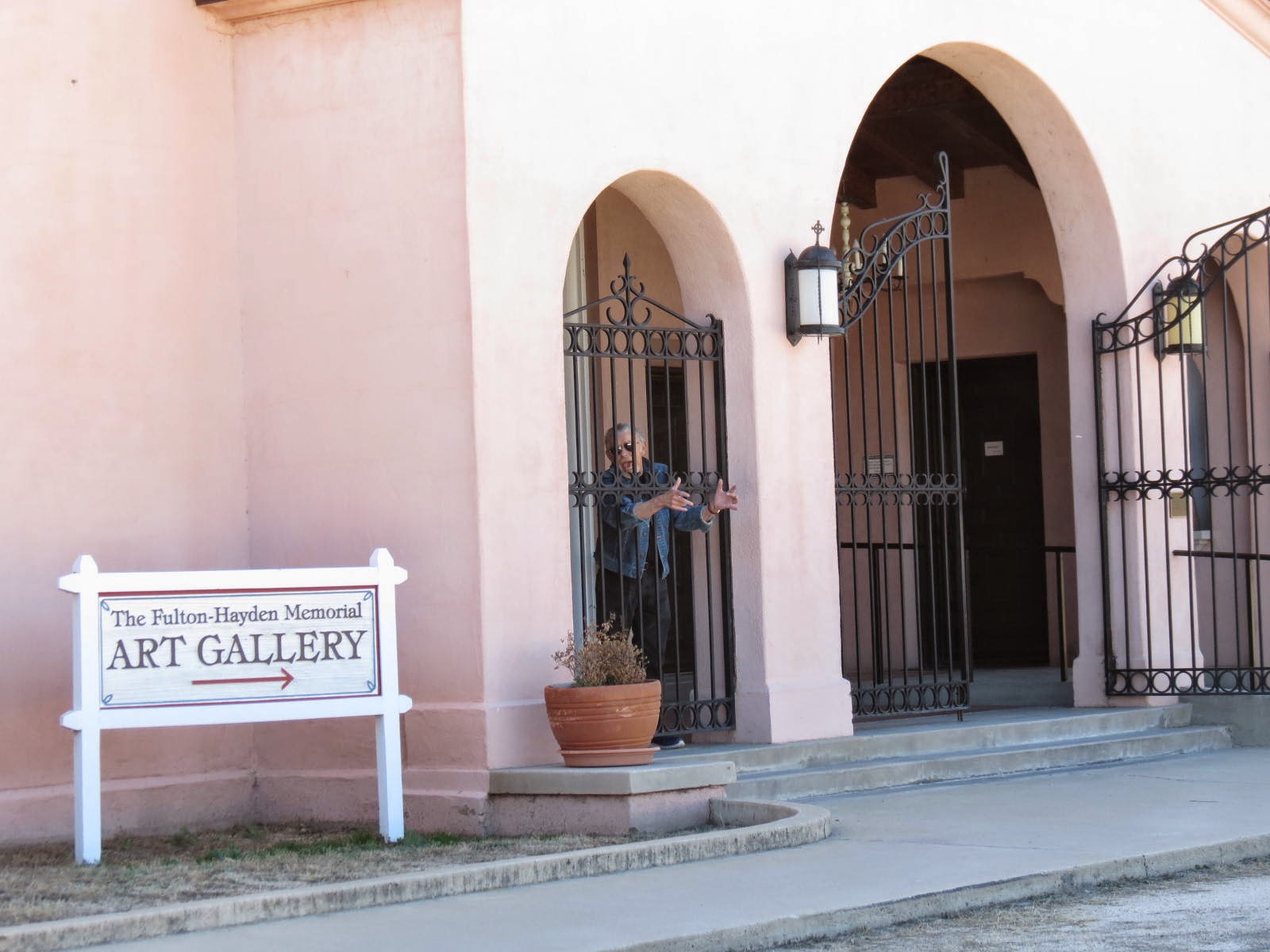 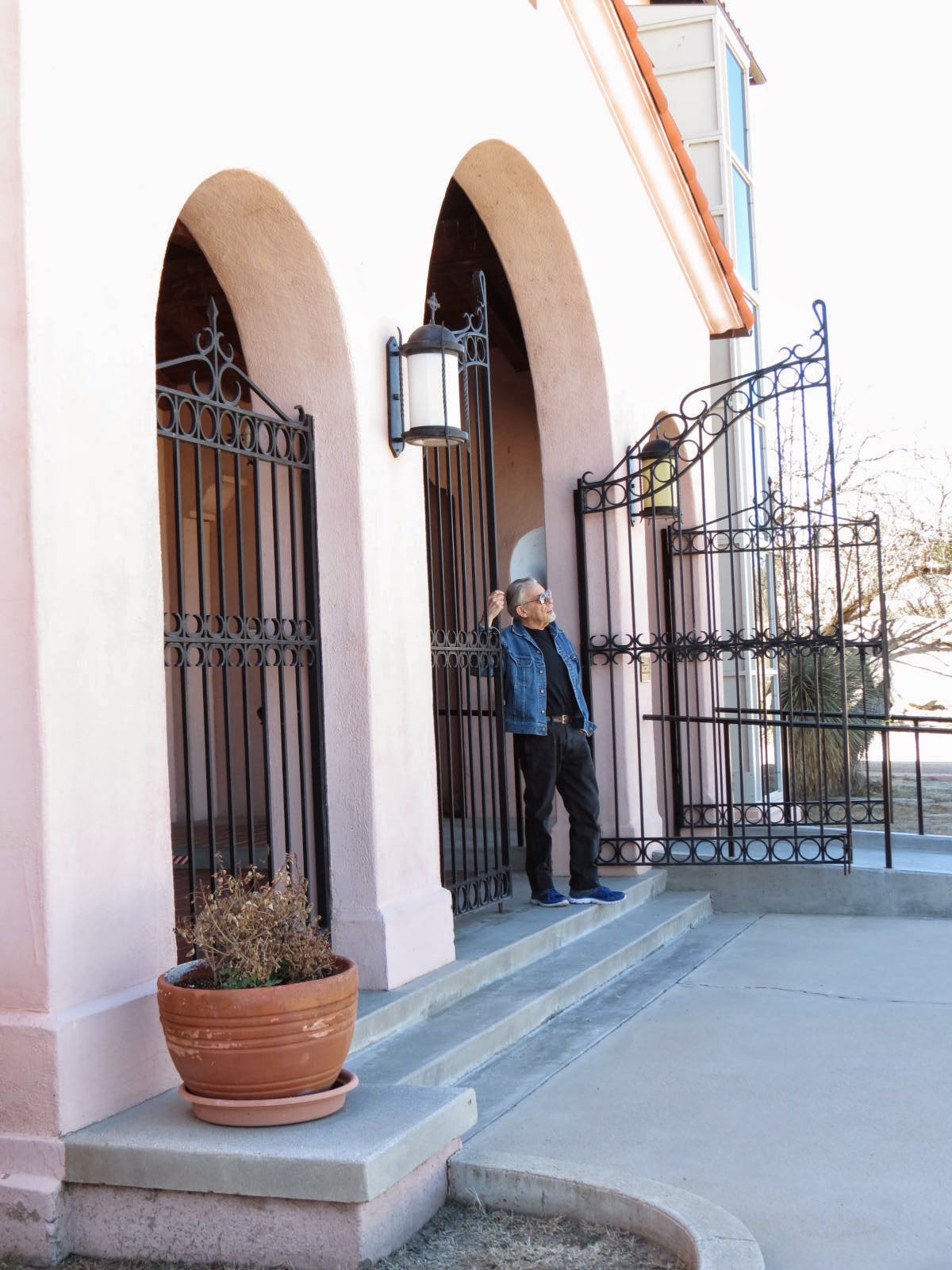 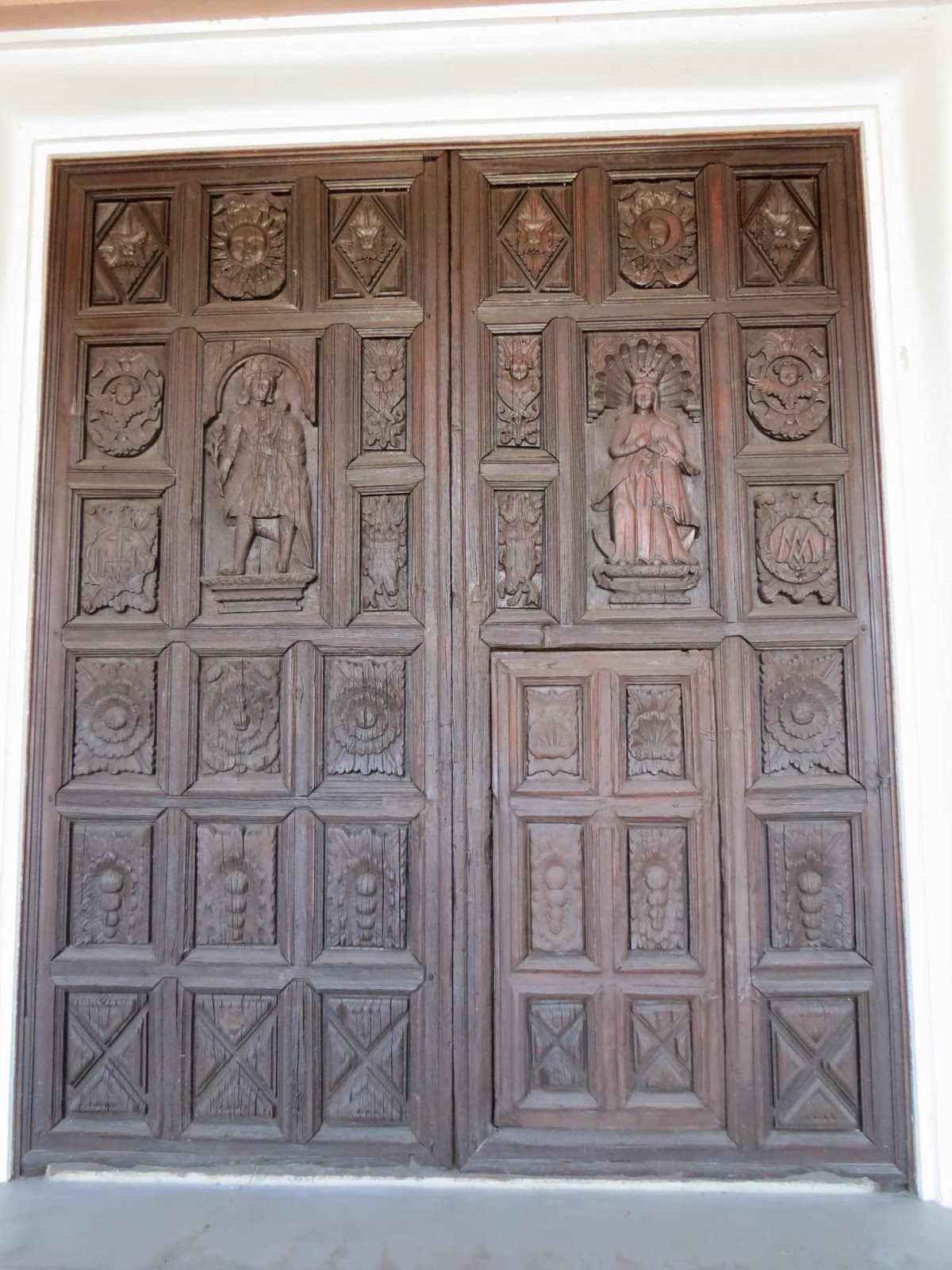 No photographs may be taken in the gallery, understandably, but I did take a few non-flash shots in the museum. 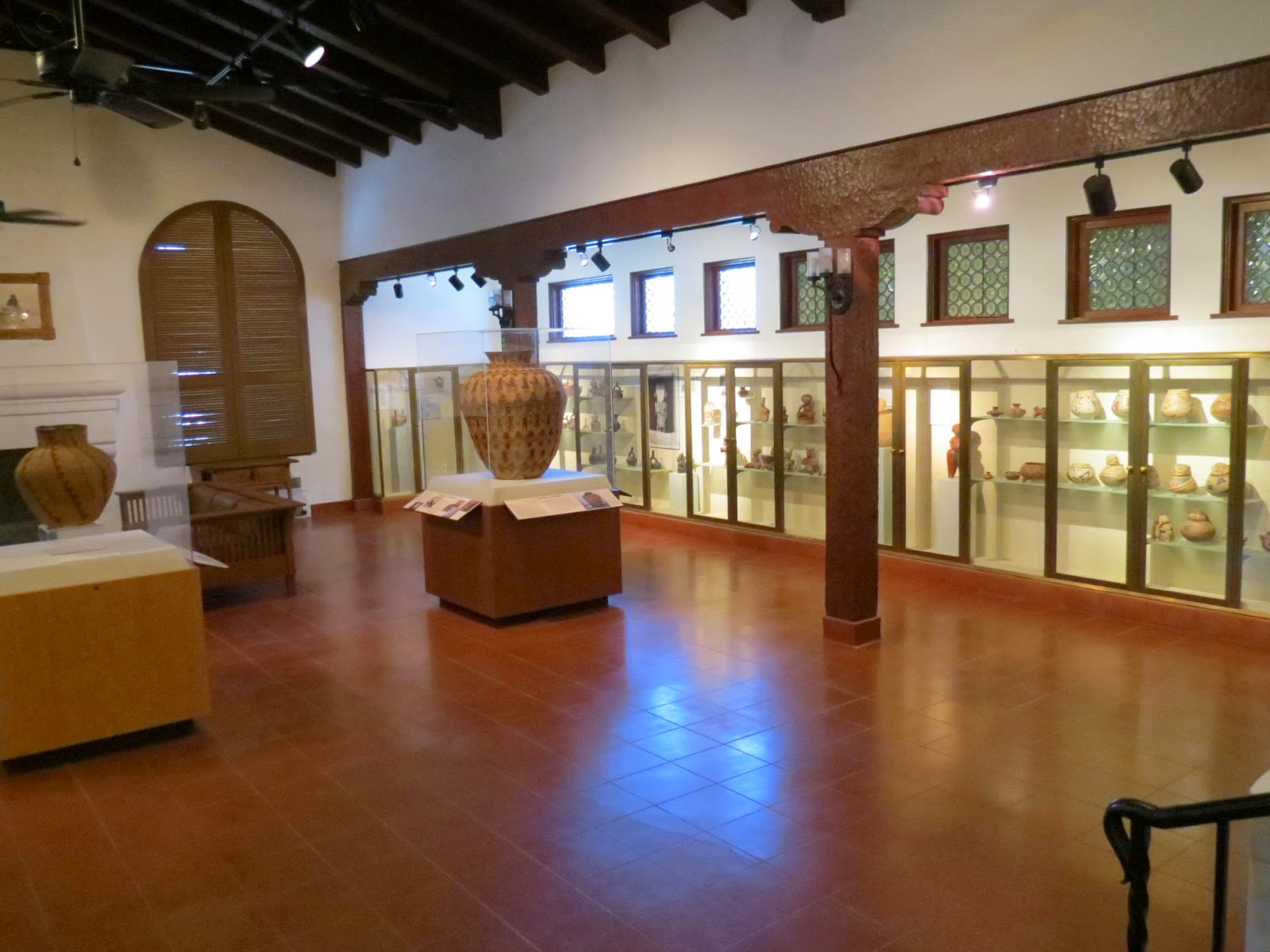 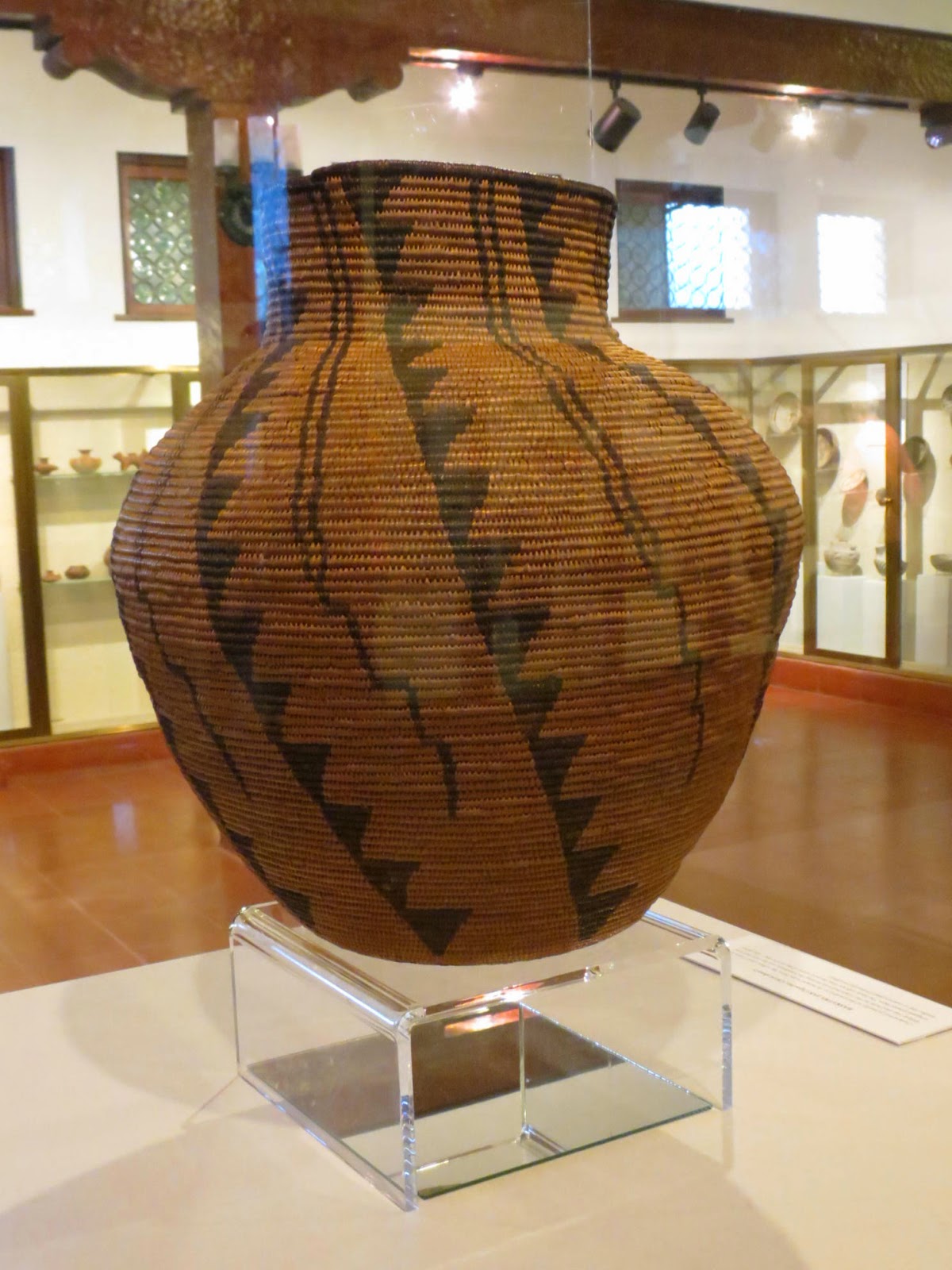 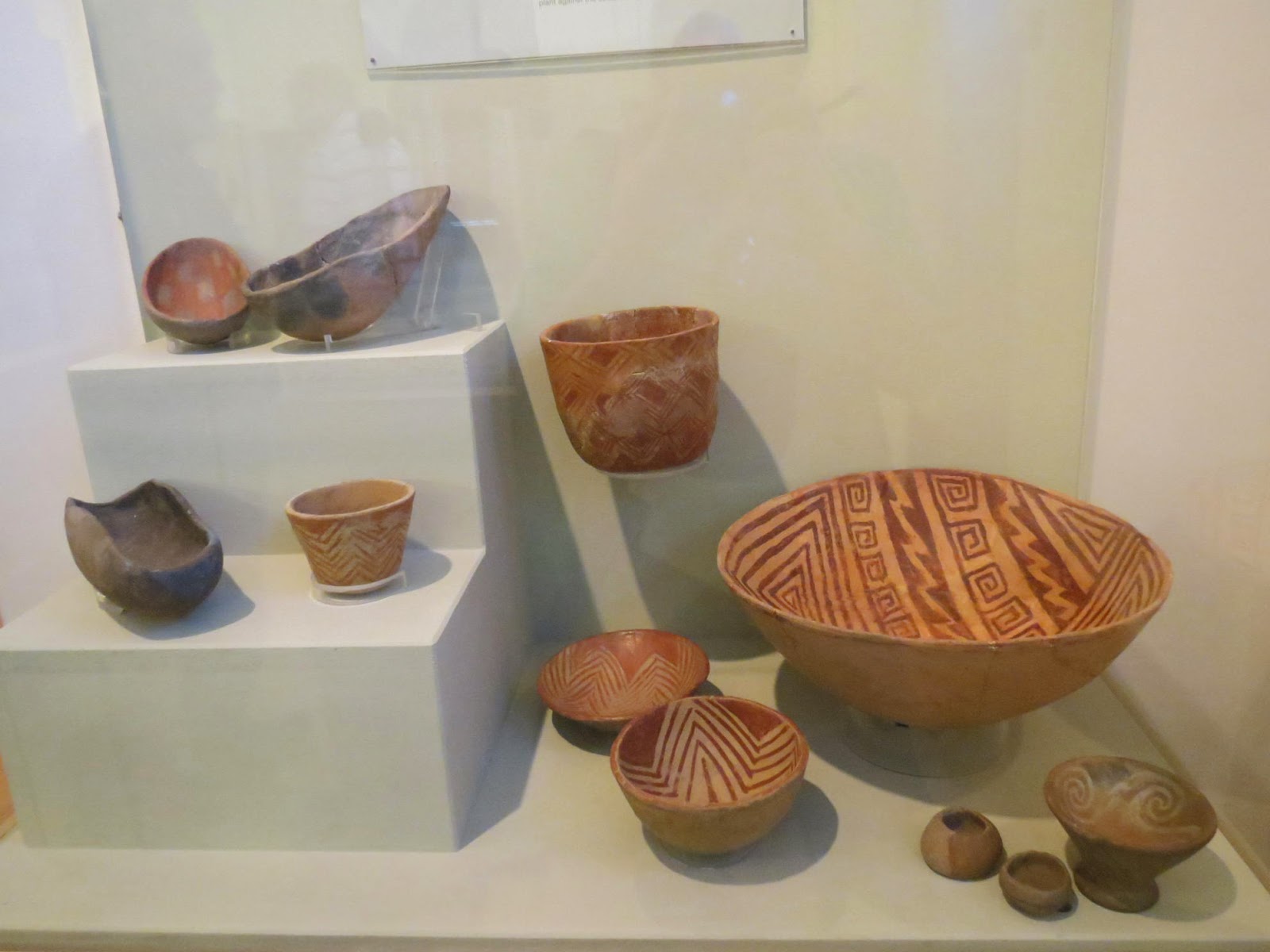 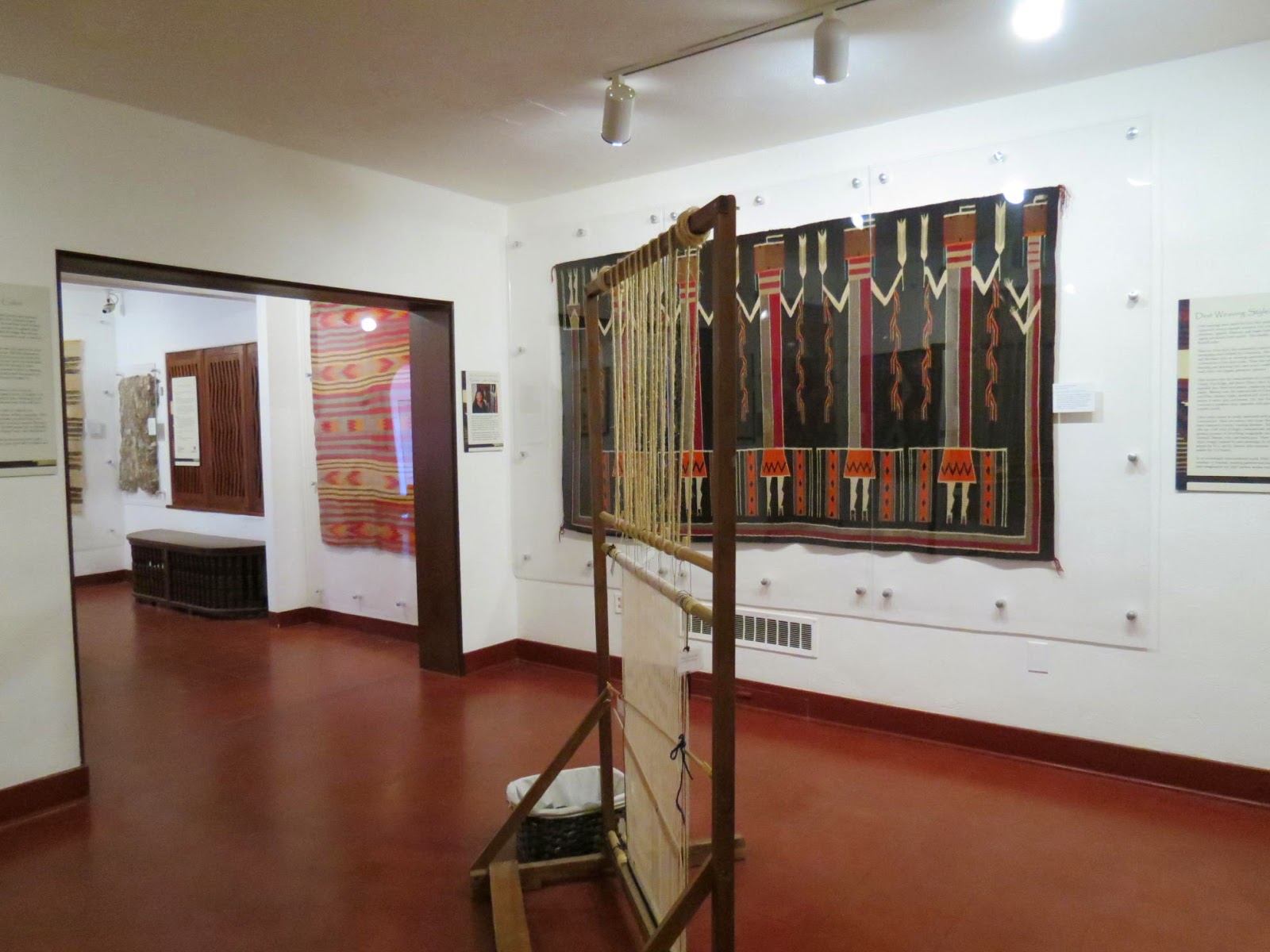 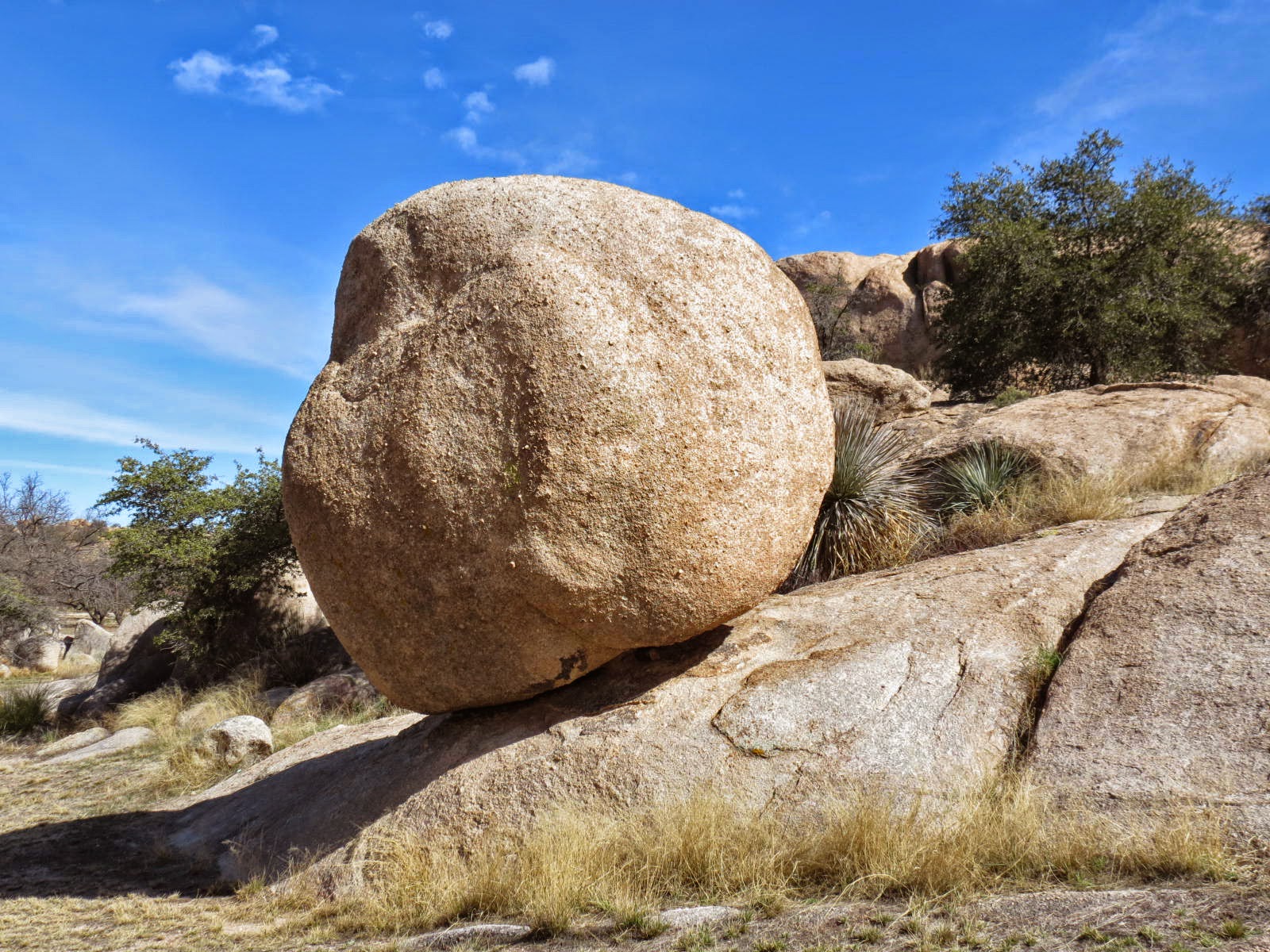 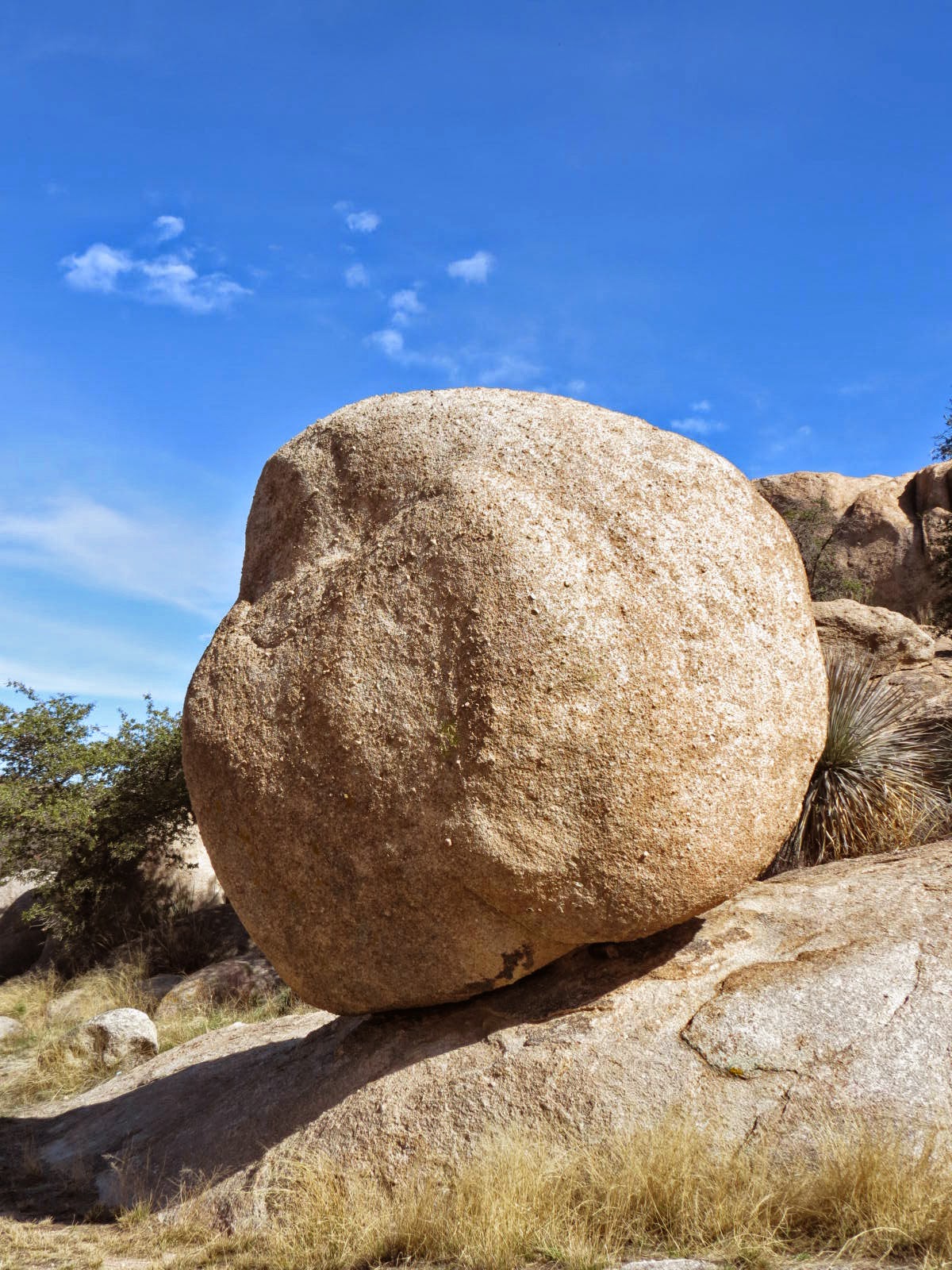 David was exceptionally taken with the natural setting of the museum, situated in spectacular Texas Canyon, home of eye-popping balanced rock formations. Texas Canyon is home to giant igneous rocks weathered over time, similar to those in Chiricahua National Monument, but differently shaped. In Texas Canyon, the magma never quite broke through the surface as it did in the Chiricahuas, and Texas Canyon is also at a much lower altitude and without (as far as I could see) any significant stream action. So while Chiricahua is known for its columns, Texas Canyon is known for its balanced rocks. A brochure on the area geology makes the point that these formations are “relatively young” but that, even so, the dinosaurs had already been extinct for 10 million years before these rocks were formed. I wonder how long it took for them to achieve their present shapes and positions.

And now long has this old, twisted tree been growing here, and did it force its way right through a boulder? 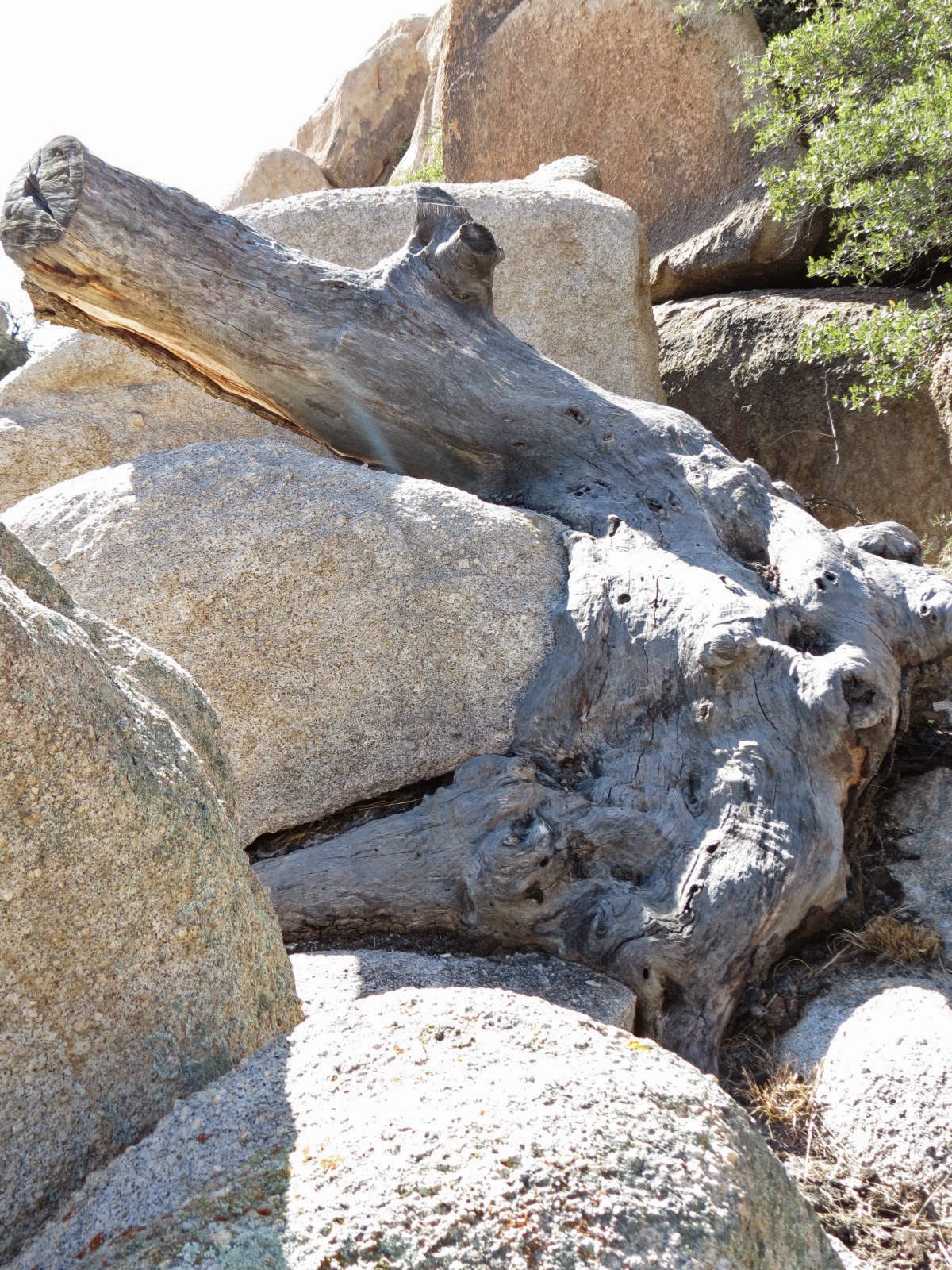 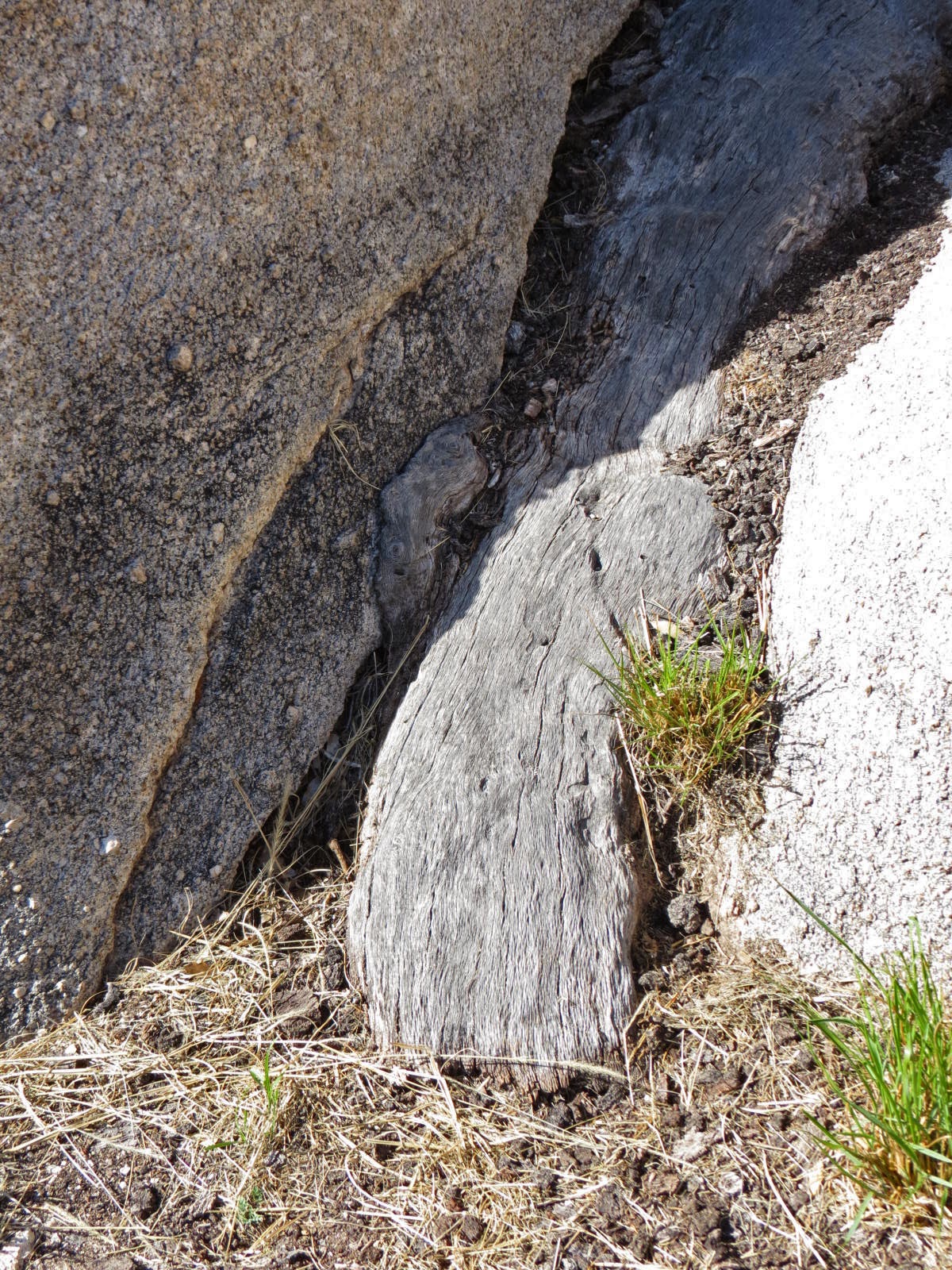 Well, we’d already been to Lenore’s bookstore and the Amerind Museum and the adjacent art gallery, and we had enjoyed our little picnic of raisins and almonds and water surrounded by fantastic rocks (and no other picnickers!), so we were already satisfied with the day on our way back home. 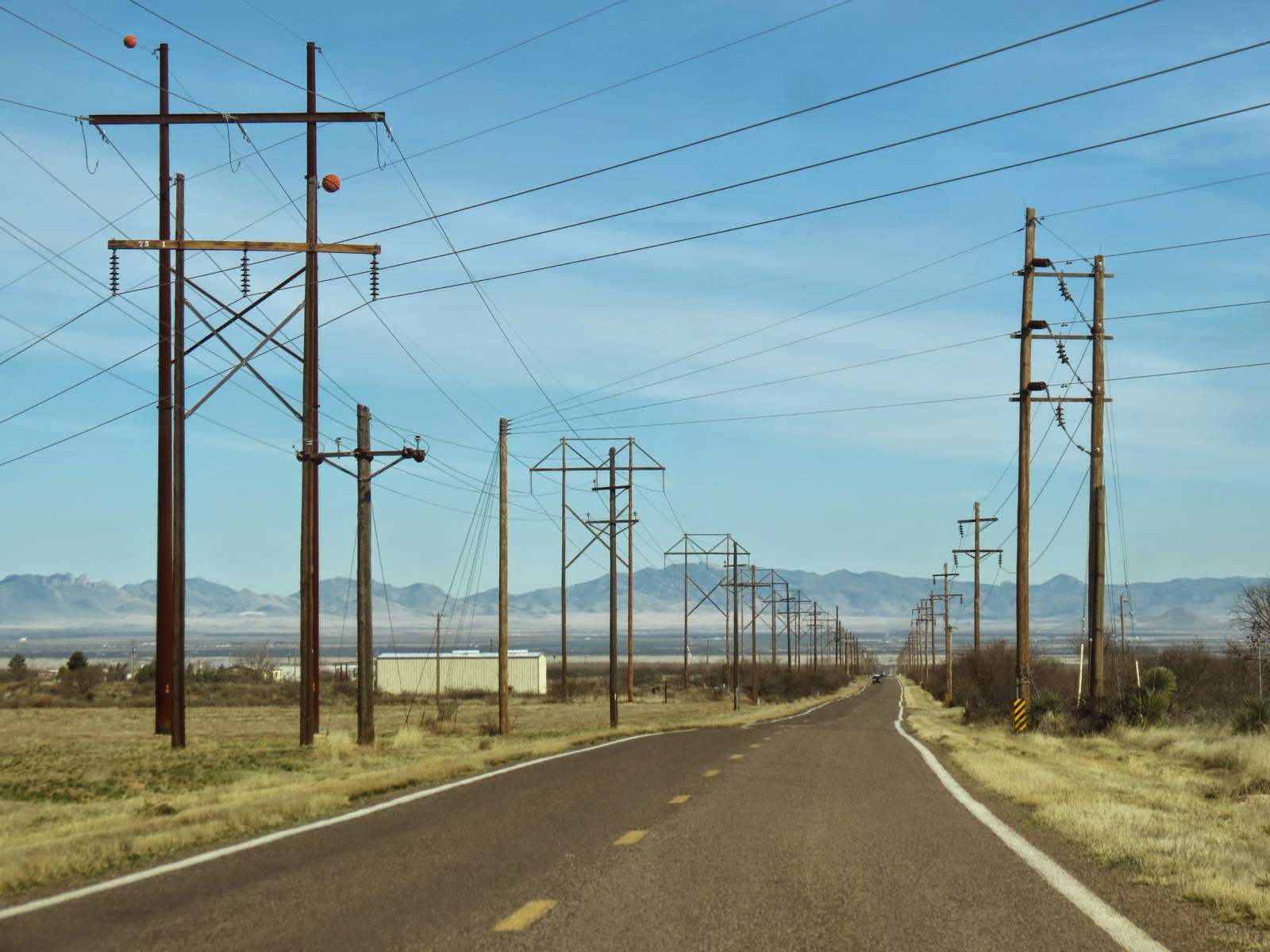 We took Dragoon Road over to 191 and turned north toward Willcox. And then, just past the power plant, I saw a sign for a wildlife viewing area! On the west side of the playa! 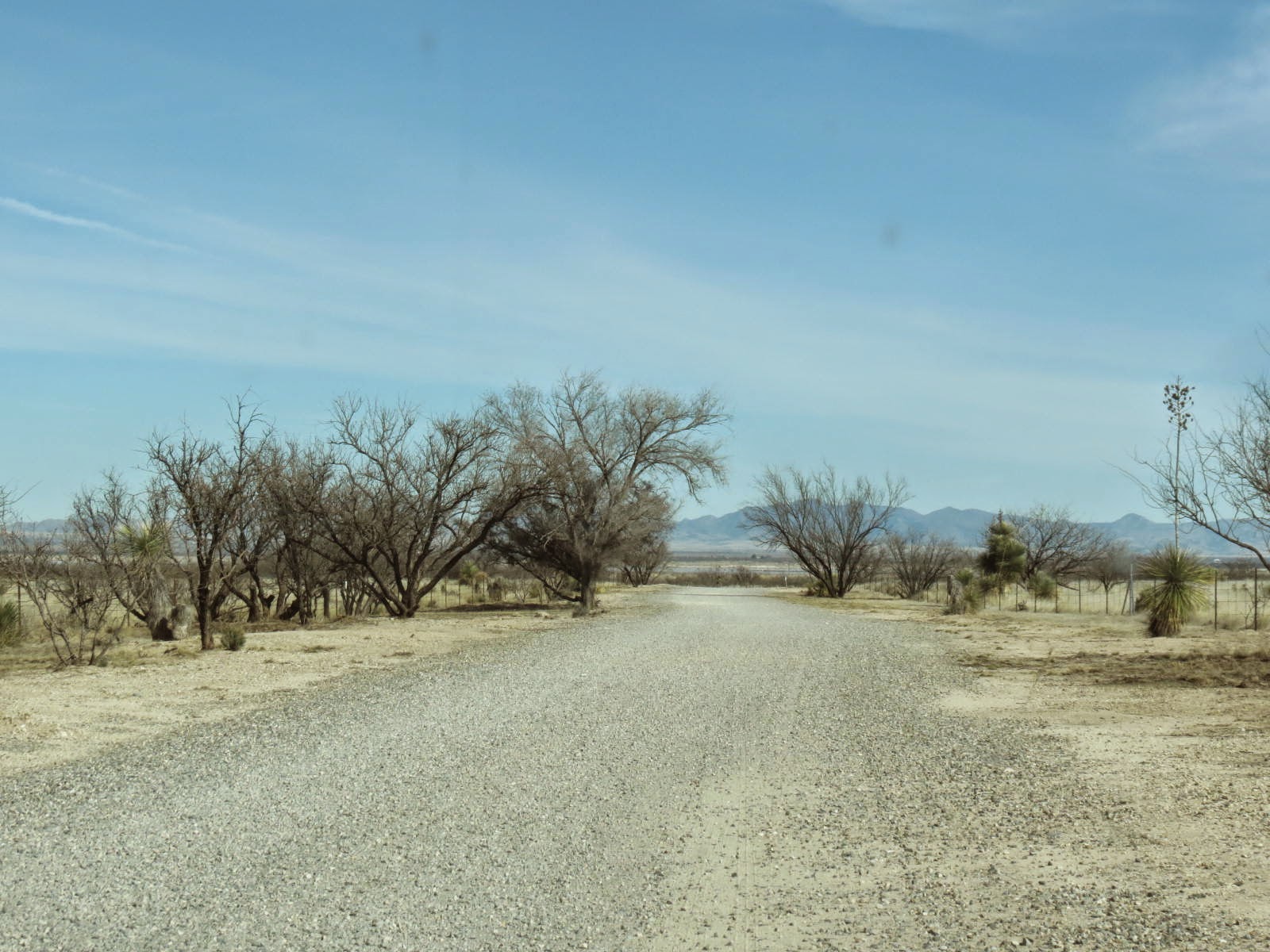 We followed the road in and climbed up to the viewing platform. There was water! There were birds! How satisfying! And I must confess, I felt vindicated, which can be a pretty good feeling, but seeing water is the best feeling, for someone from Michigan. 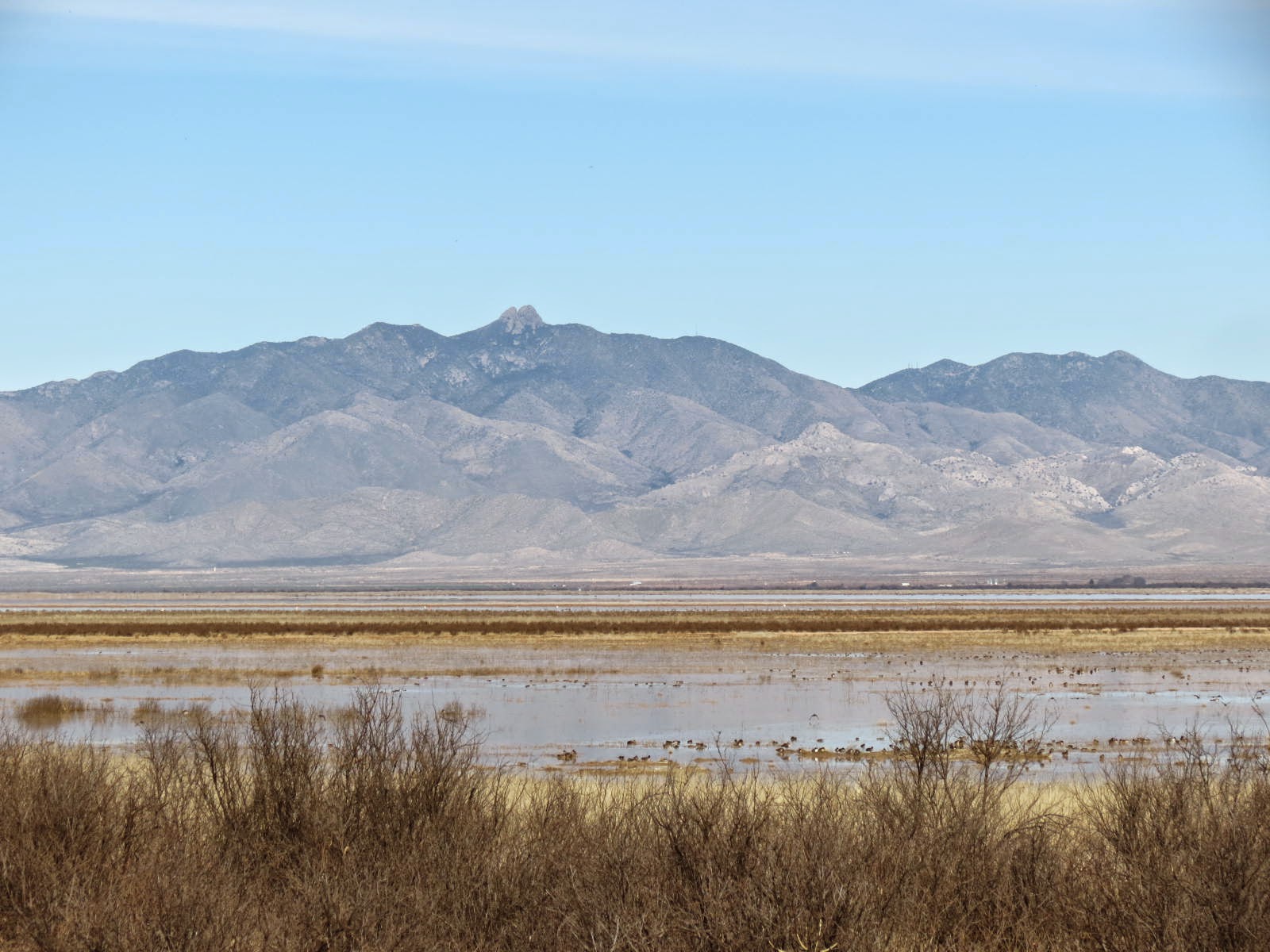 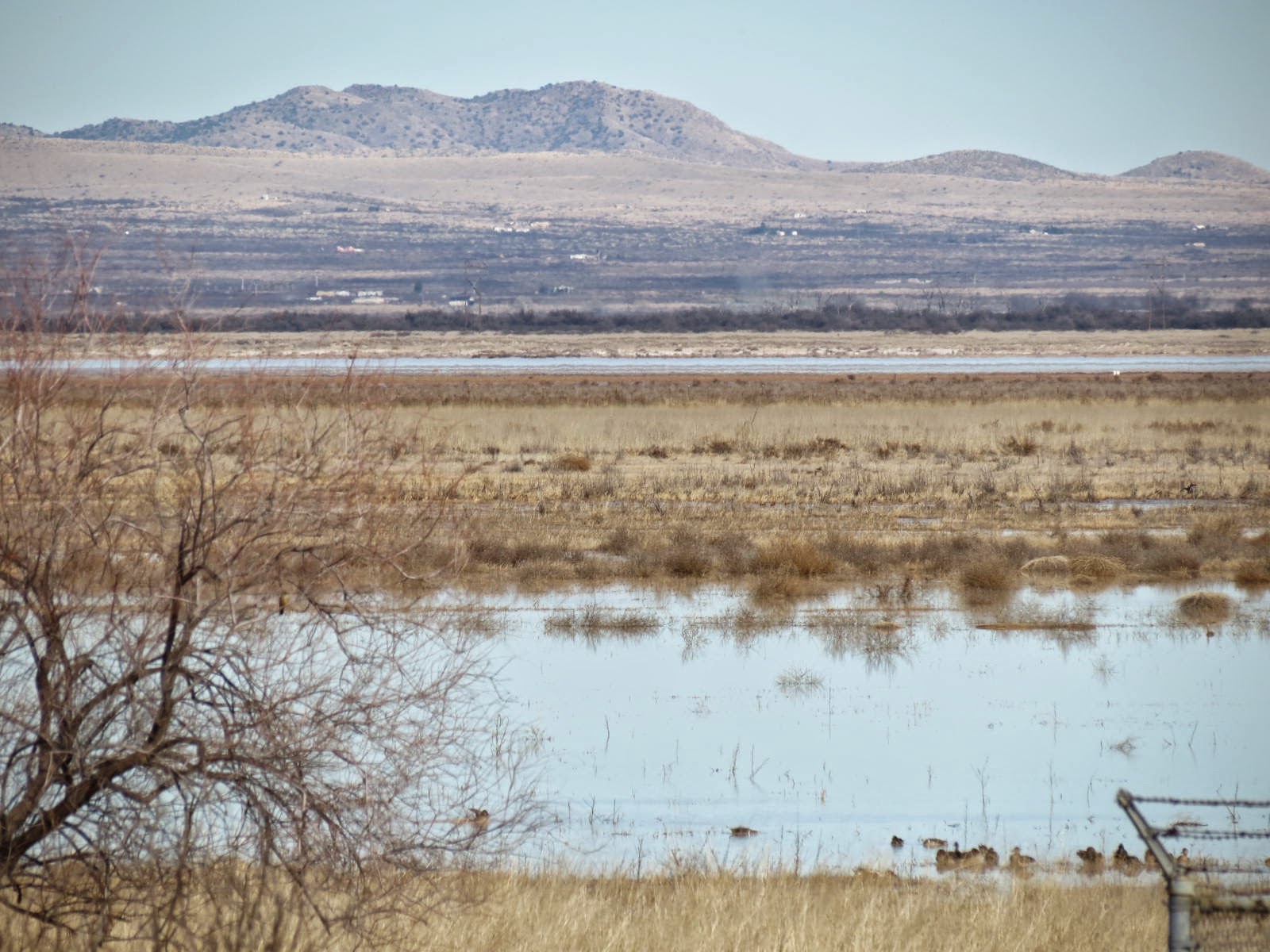 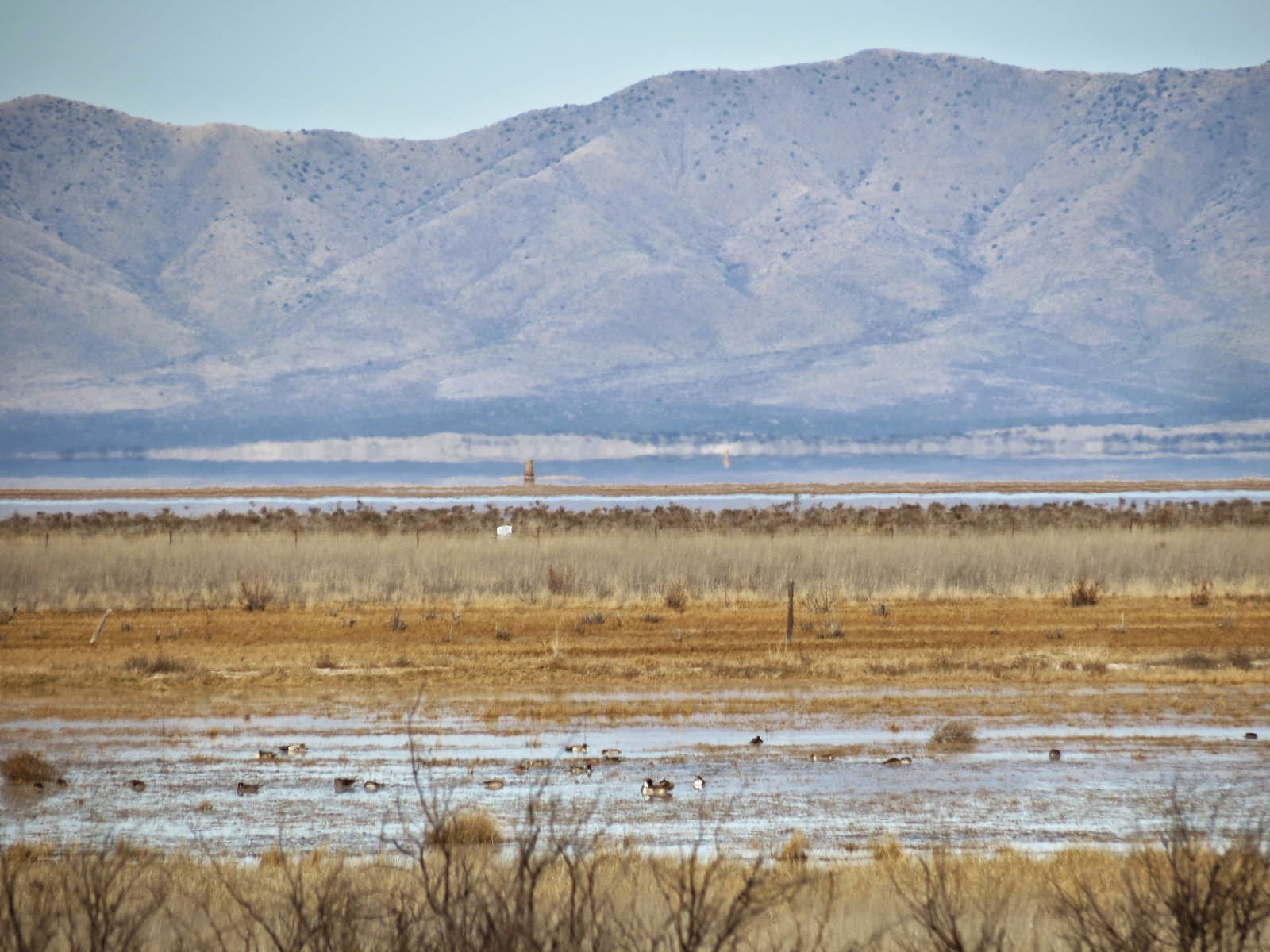 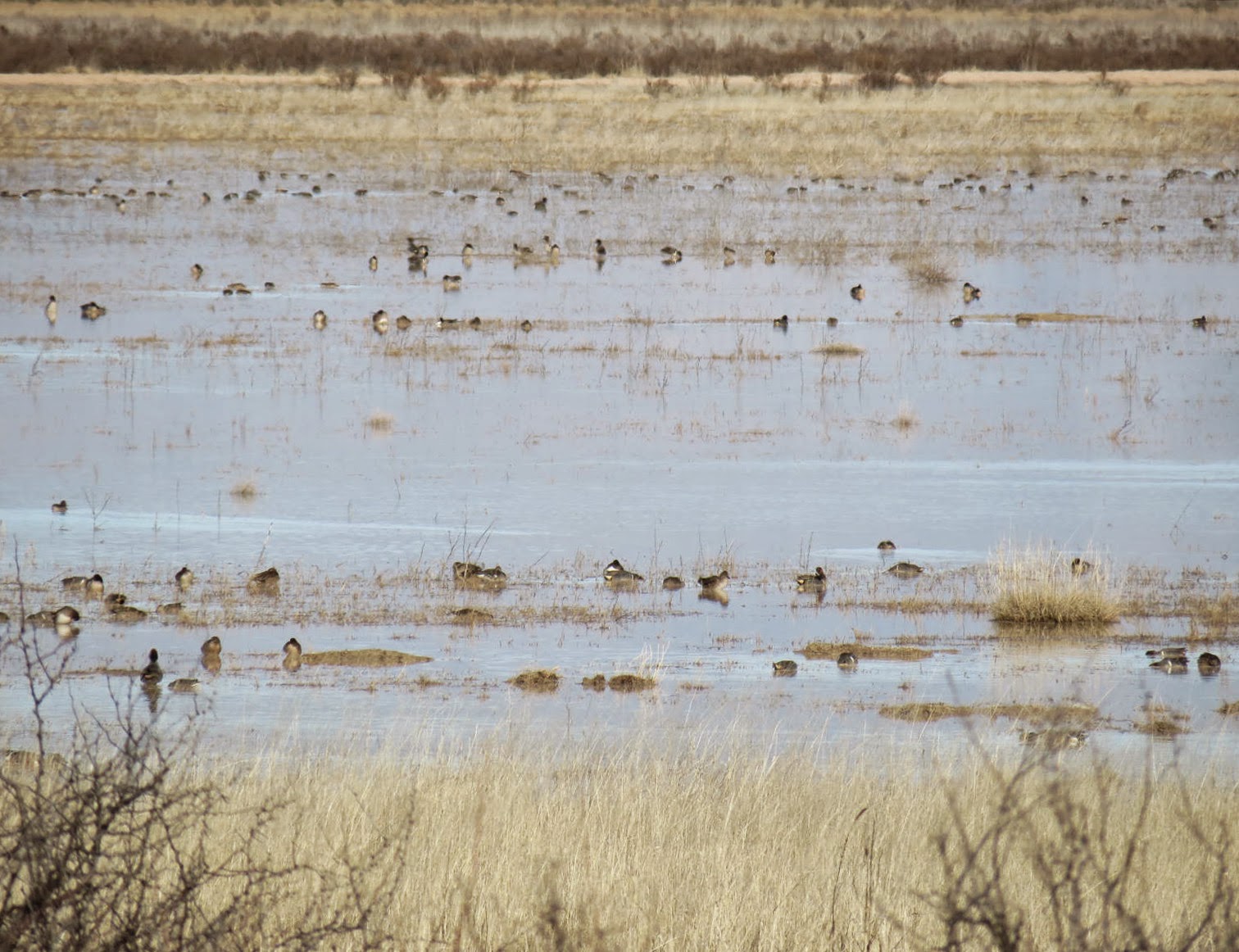 Highway 191 up to I-10 takes the high road, so to speak over the railroad line, and from the elevated vantage point it is possible to verify that the train line does, indeed, as indicated on maps, cross a corner of the playa. How I would love to ride that section of track! 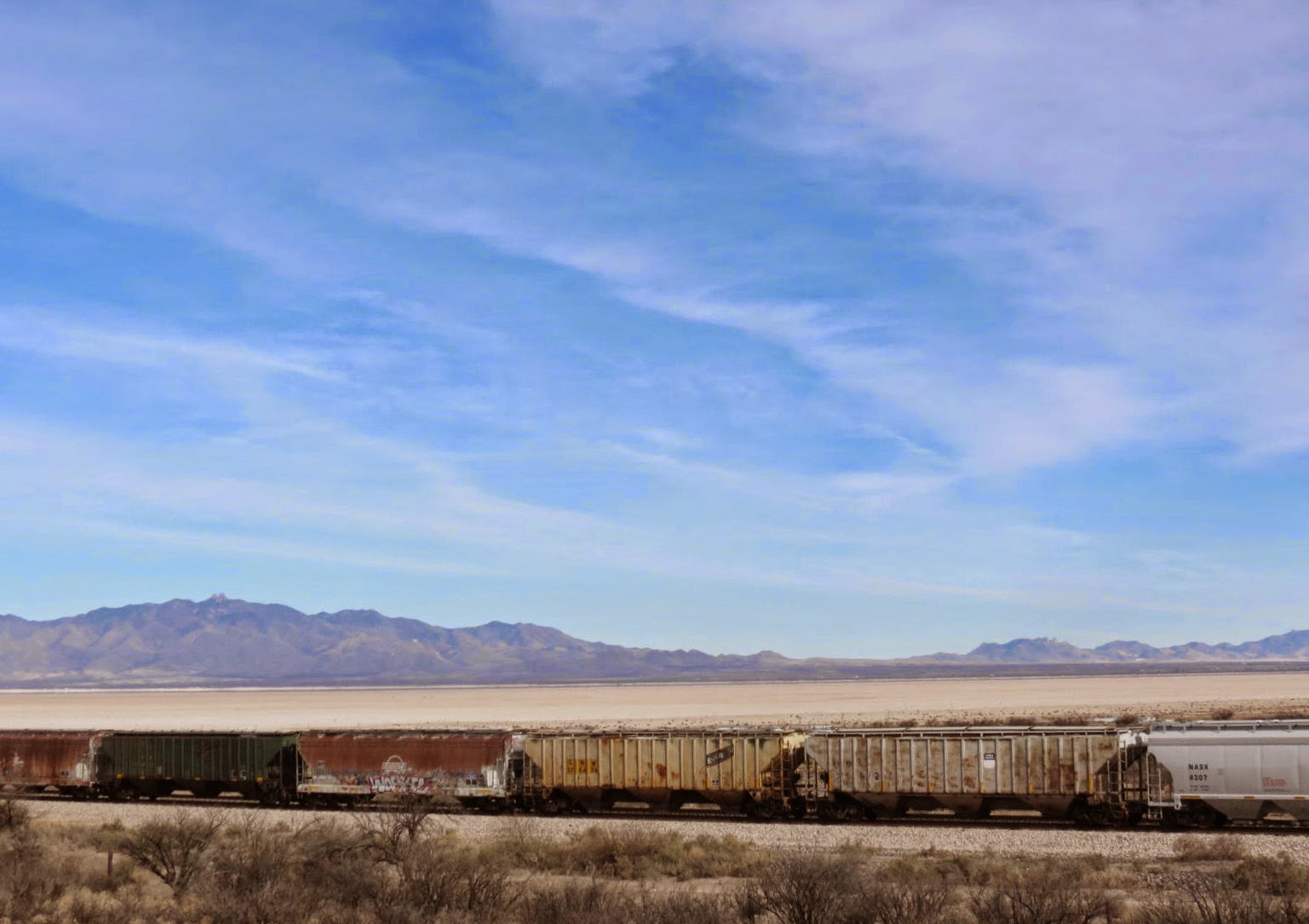 Well, what a day it was -- and yet, I was torn about whether or not to post this story and these images at all because I am so excited about my next post that I can hardly wait to share it!

Wonderful story! I'm so glad you found water in the playa. But how can a viewer be fully satisfied when she knows something bigger and better is on the horizon?? You sure know how to build suspense!

I'm teasing myself, too, Karen, by holding off with the next post, which will contain TWO wonderful and very different events.

Ever the railroad fan, I was motivated to check out the tracks
near the Playa: Former Southern Pacific, now Union Pacific, and once in awhile (around 7:30 PM
westbound/10 AM eastbound, on
alternating days, the old 'Sunset
Limited', now Amtrac*, rolls by there. Then, accidentally ran across the Wilcox Parade
which is October, in case you are back in the land of trees by then.
(Note, the nearby train passing by
about halfway through. and then the Wilcox HS band warming the heart of this old Badger with a rousing "On Wisconsin". Hey, I'm enjoying the trip..in vicarious comfort, of course...
*Benson is a flag stop. I think that means you can get off there,
but since the depot is unstaffed,
I doubt you can get on.

BB, thanks for the link and information! I love that Willcox is at least a flag stop. We saw the passenger train go through one day, and I was a bit disgruntled that it didn't stop here. Flag stop is better than nothing. Muchas gracias, amigo!

Recommend EVERYONE follow BB's link and see the Willcox parade. My only complaint: not nearly enough horses. It was, however, a sunny day and showed part of the Old Town of Willcox, and I loved the train sounds in the background. Also, seeing the band and director we saw/heard in concert a couple of weeks ago.