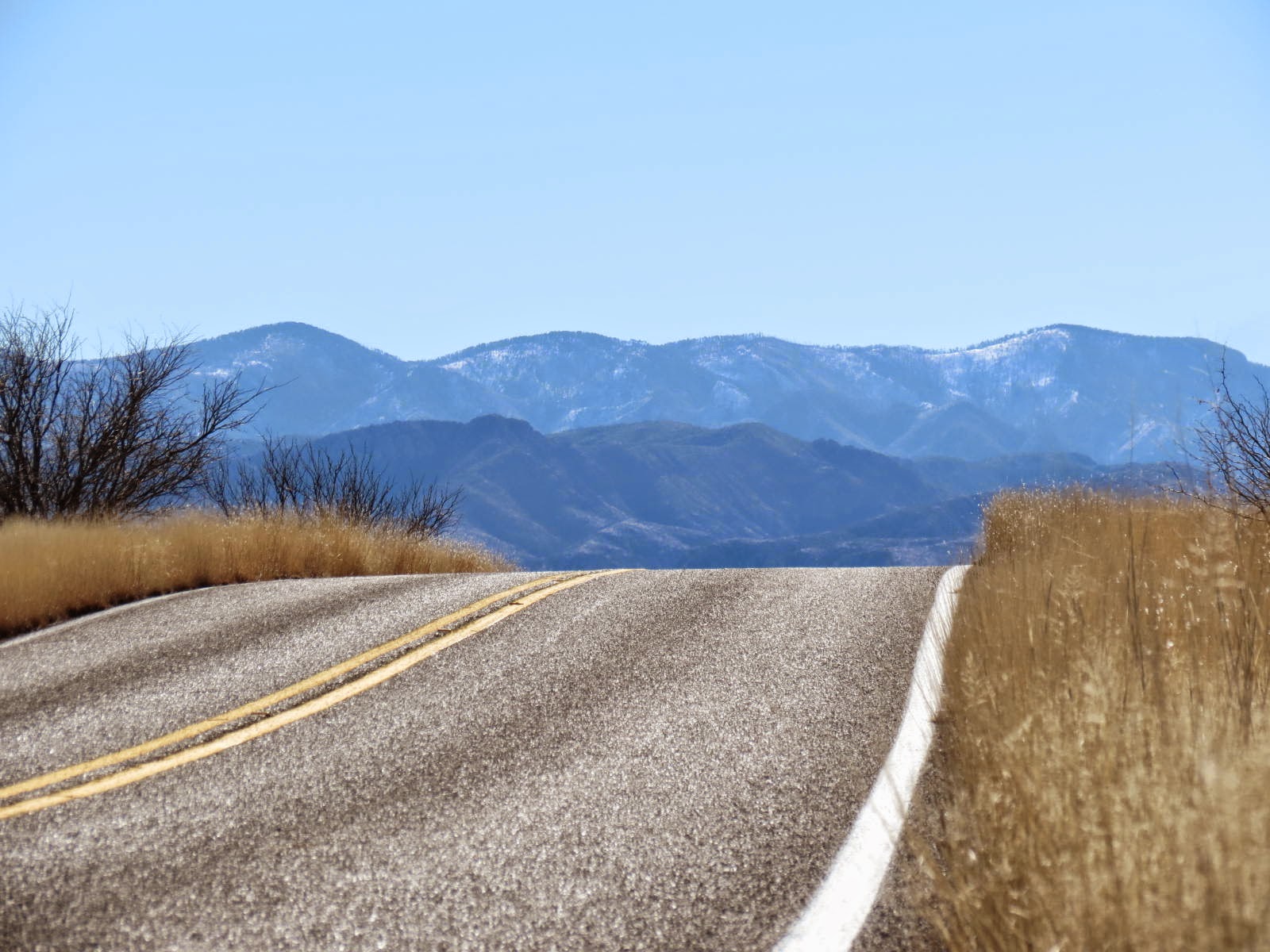 So beautiful. So nearby. No excuse is needed to go back again and again. Despite my fixation on current fixation on geology and deep time, however, our agreed-upon destination for this trip was Faraway Ranch, which would mean getting out of the car and walking but neither an arduous hike nor a frightening drive high into the mountains. 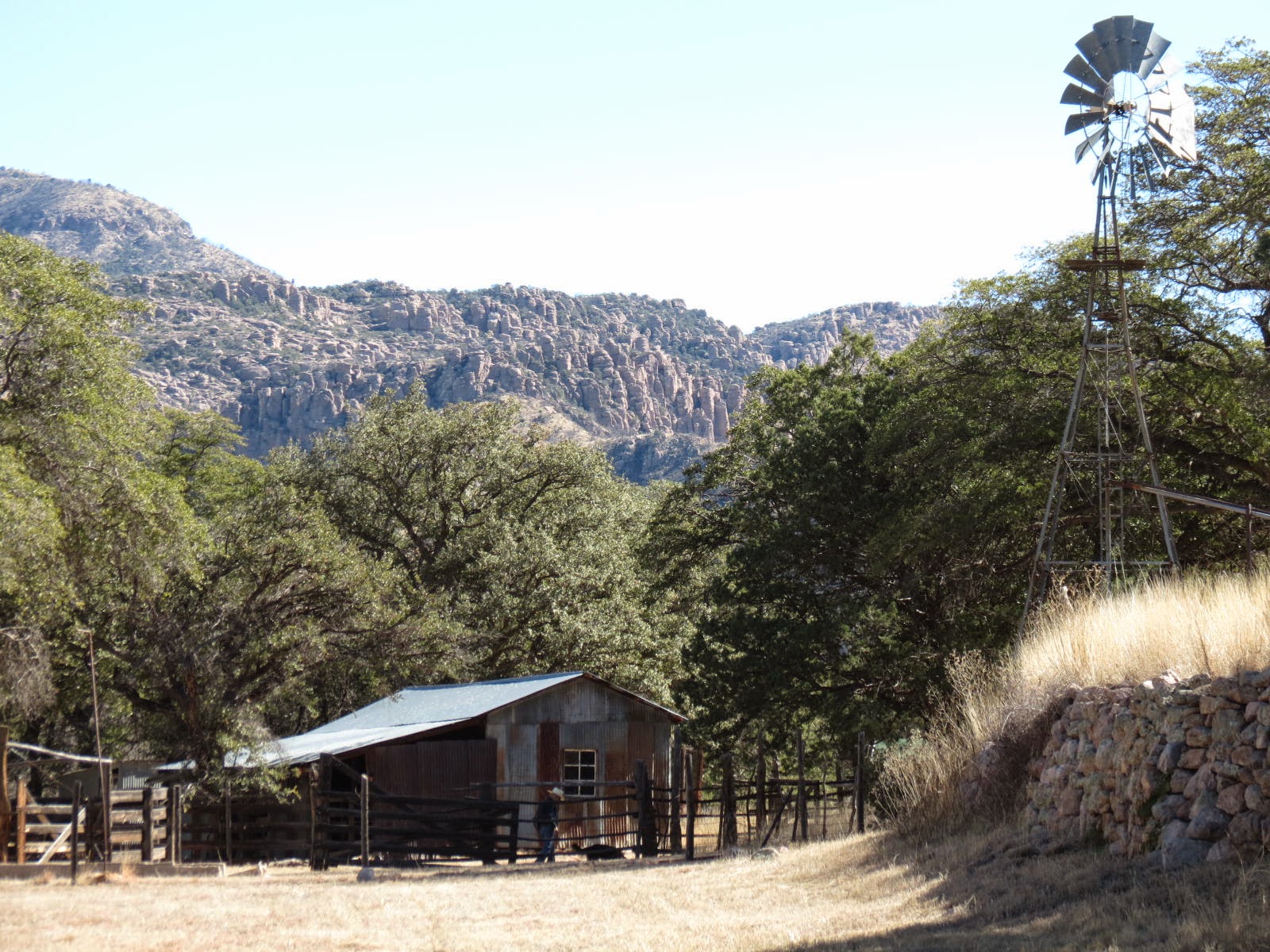 The name of Faraway Ranch should require no explanation. The name says it all. It was the first ranching homestead established in the Chiricahuas, and I believe the rancher was Swedish or Norwegian, but I’ll have to follow up on that question another time. What struck me more forcibly than his story was that after he died his wife lived on there – and she lived a long time. One of the signs at the trailhead gives this long quotation from her:

“The only sure thing, Lillian Erickson Riggs wrote in 1954, in the early days of her widowhood, “is that I love my home. And there is a feeling of safeness and security in the very walls and in the length and breadth of the spacious rooms.... Death will be far preferable to giving up my Faraway home.”

She lived on into her 90s, and this is her beautiful home as it appears today. I especially love the second-story veranda looking up into rocky hills. 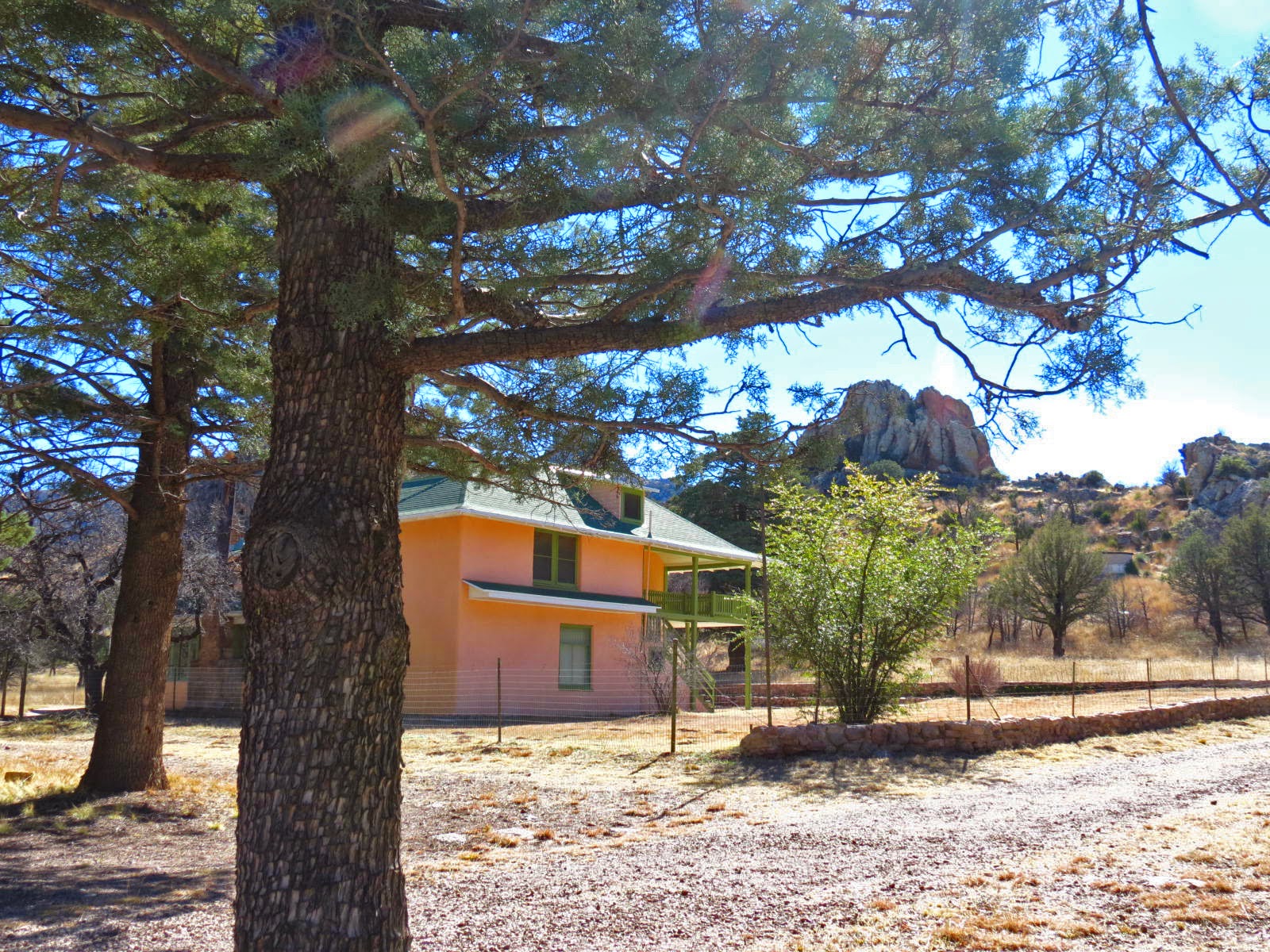 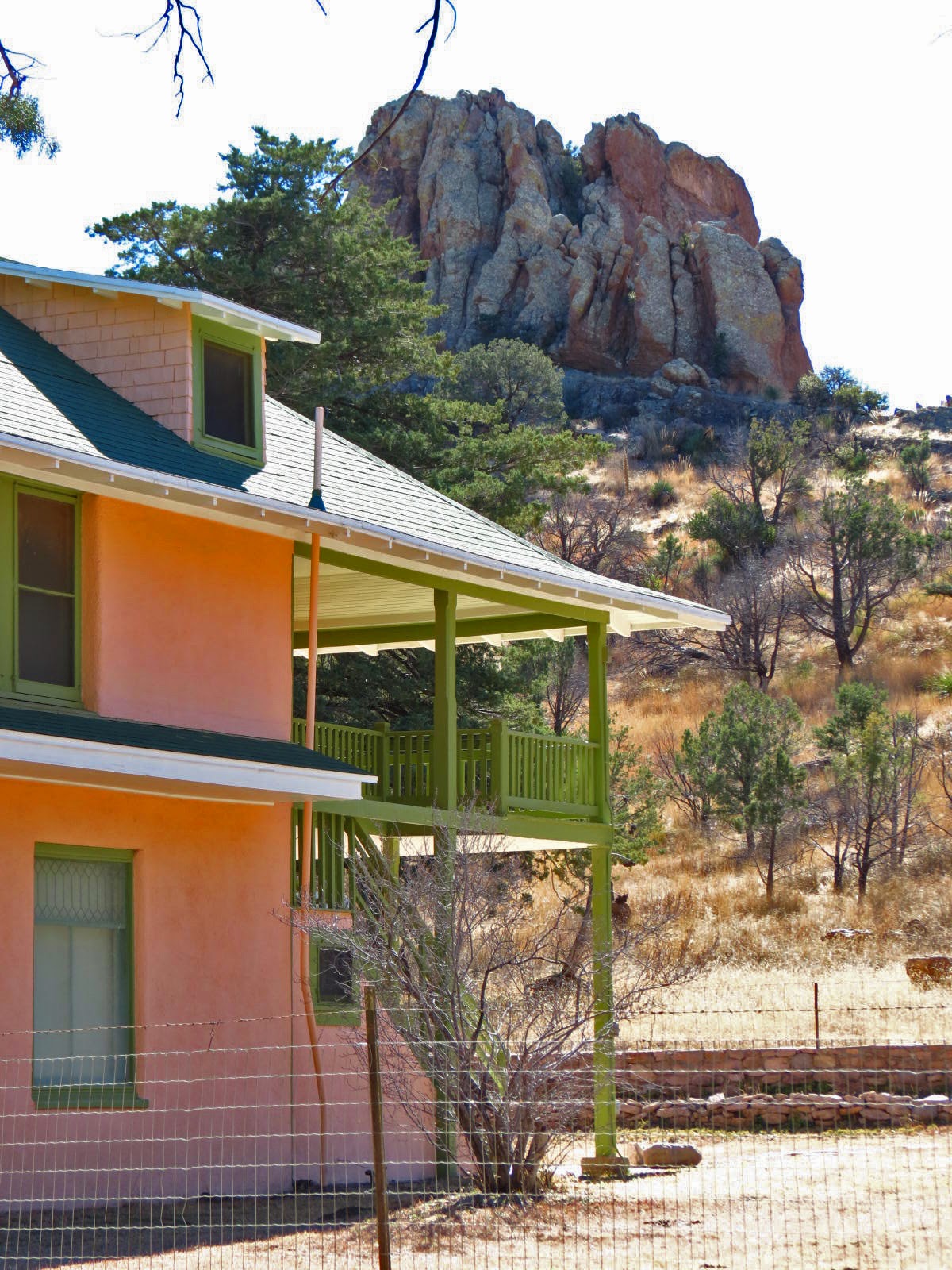 But I also love the little cabins and outbuildings and corrals and windmill, everything about the place saying that all who lived here were well cared for, the cattle and horses as well as the humans. Above the saddle trees in the tack room are painted cans, each with the name of the horse whose saddle would be stored below. Were bridles looped over the cans? 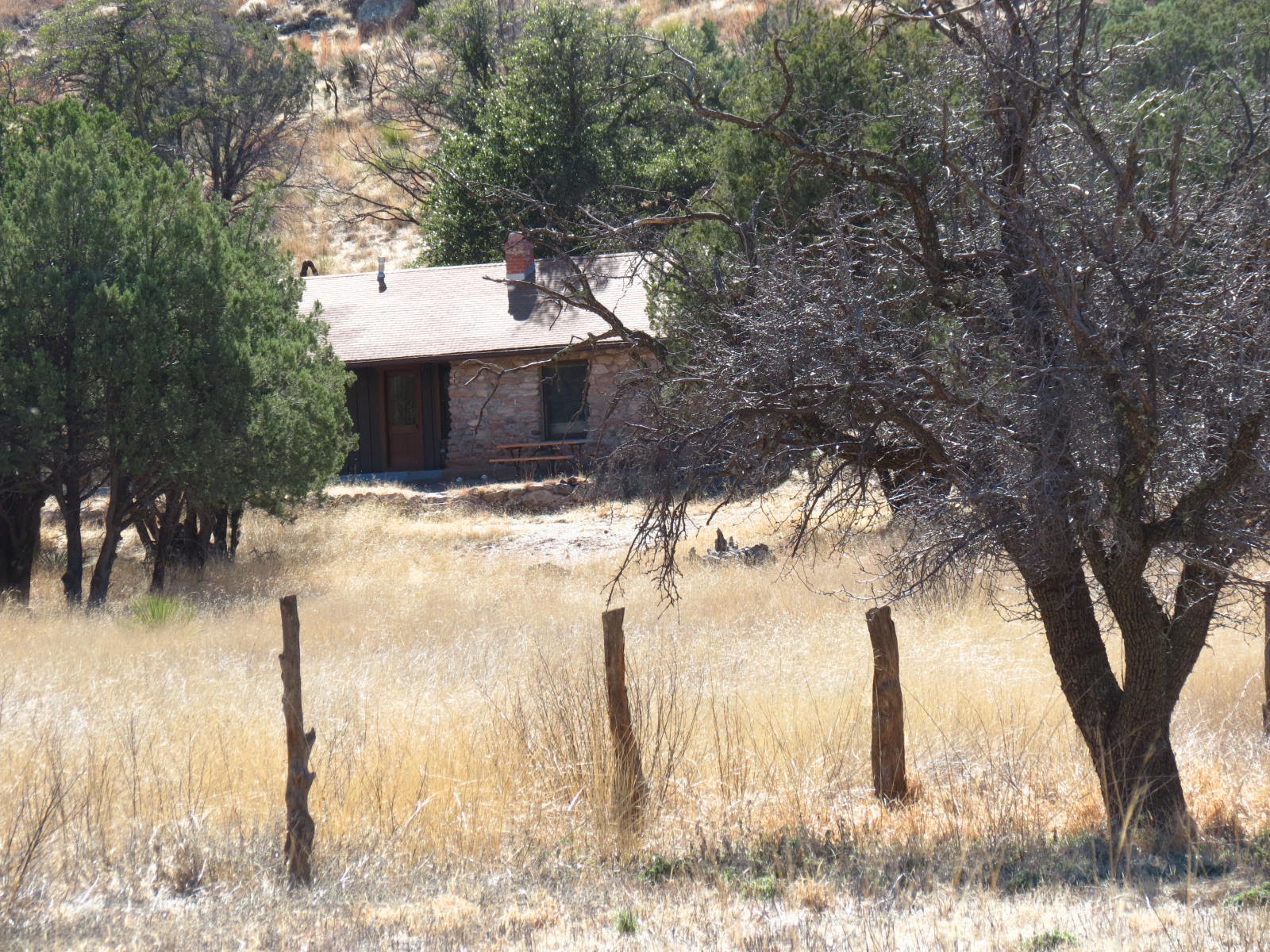 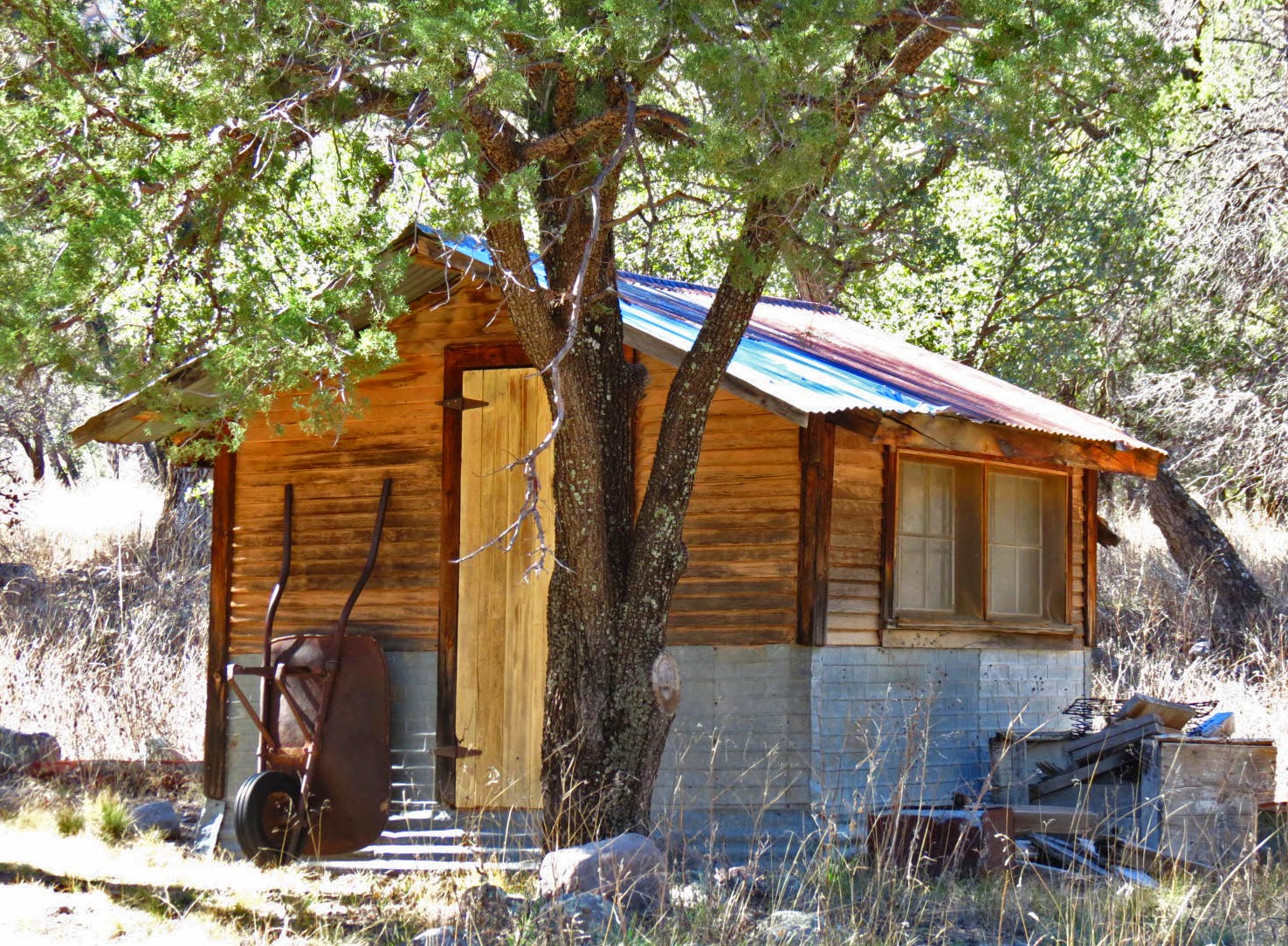 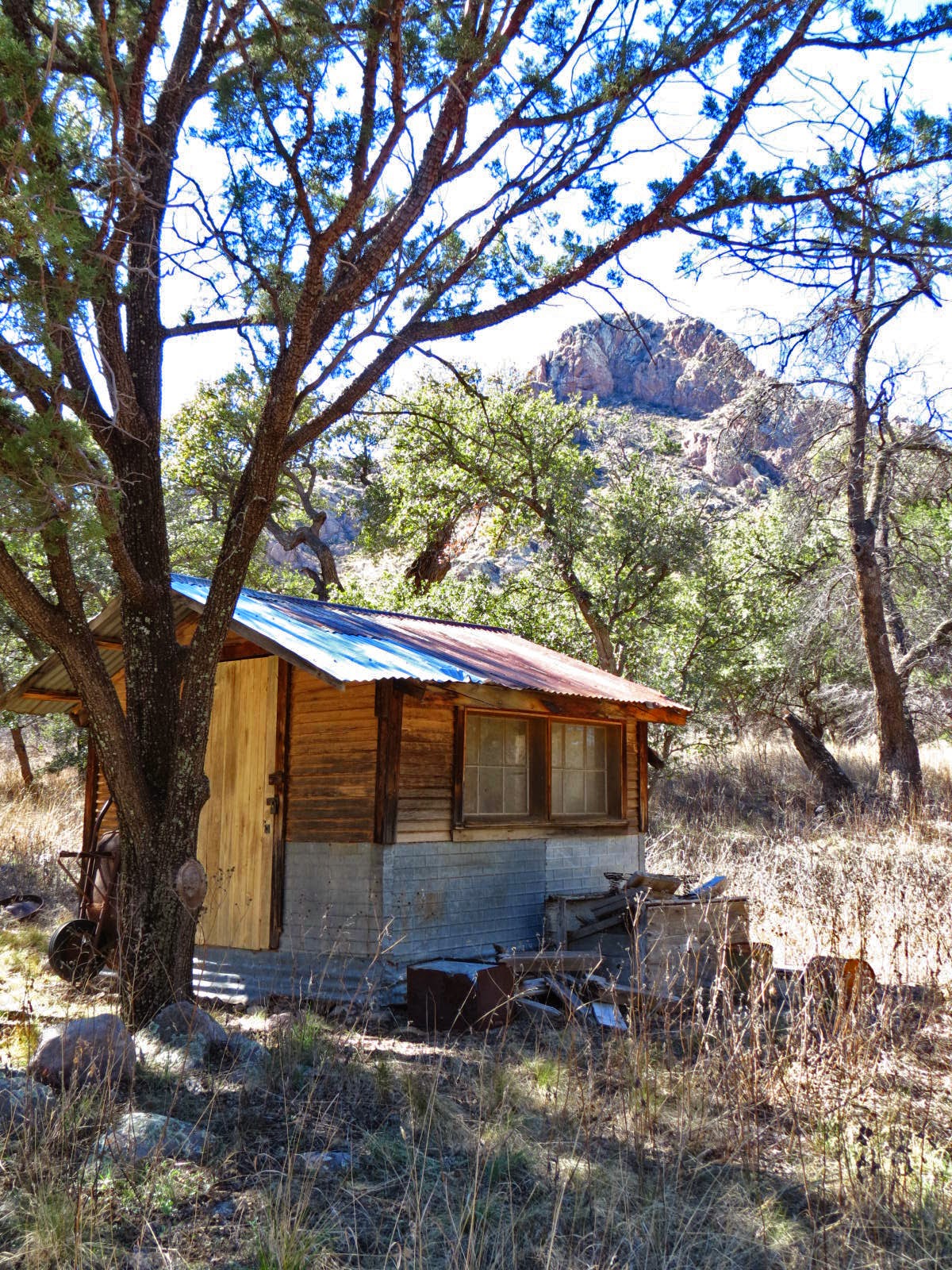 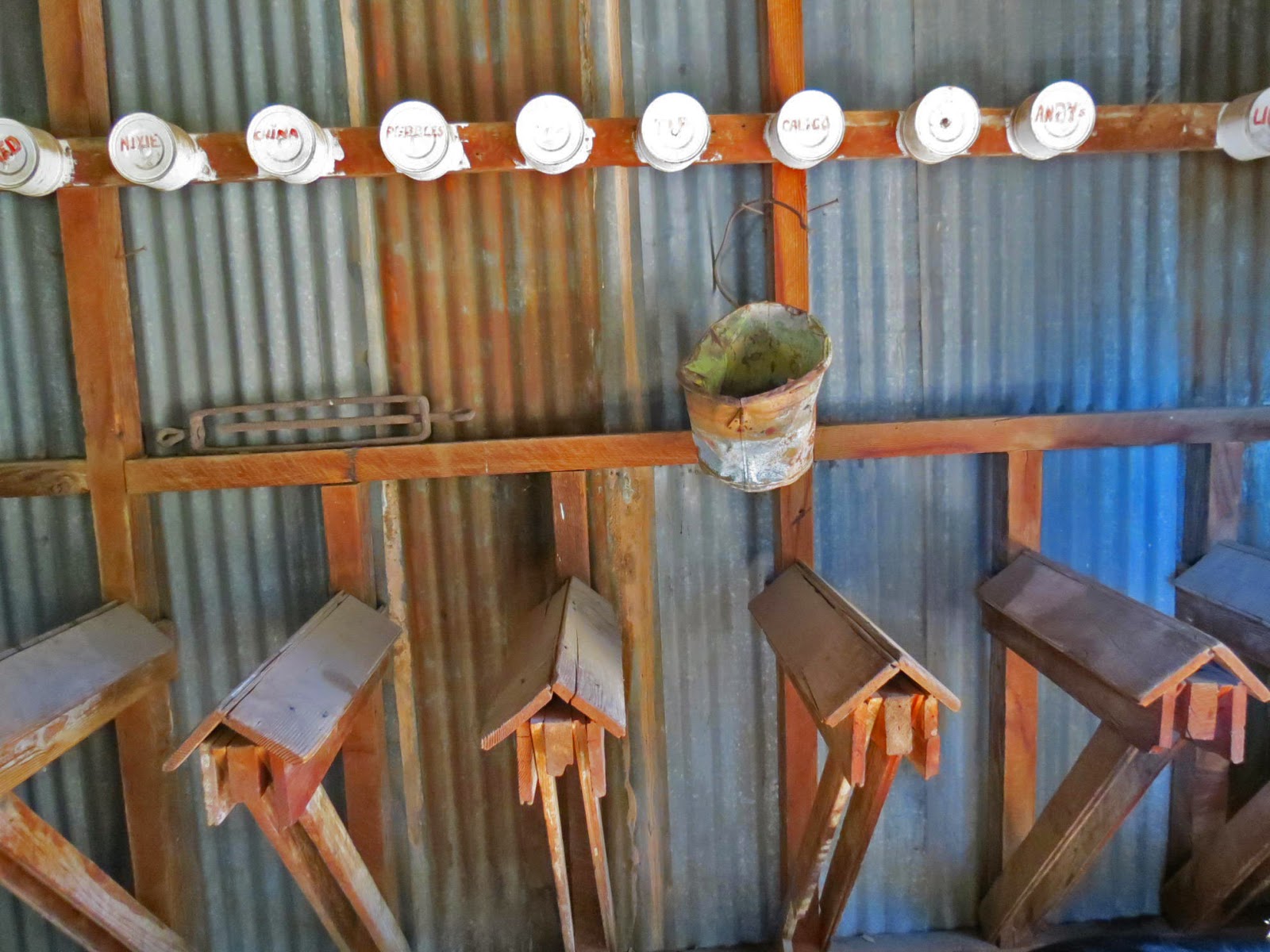 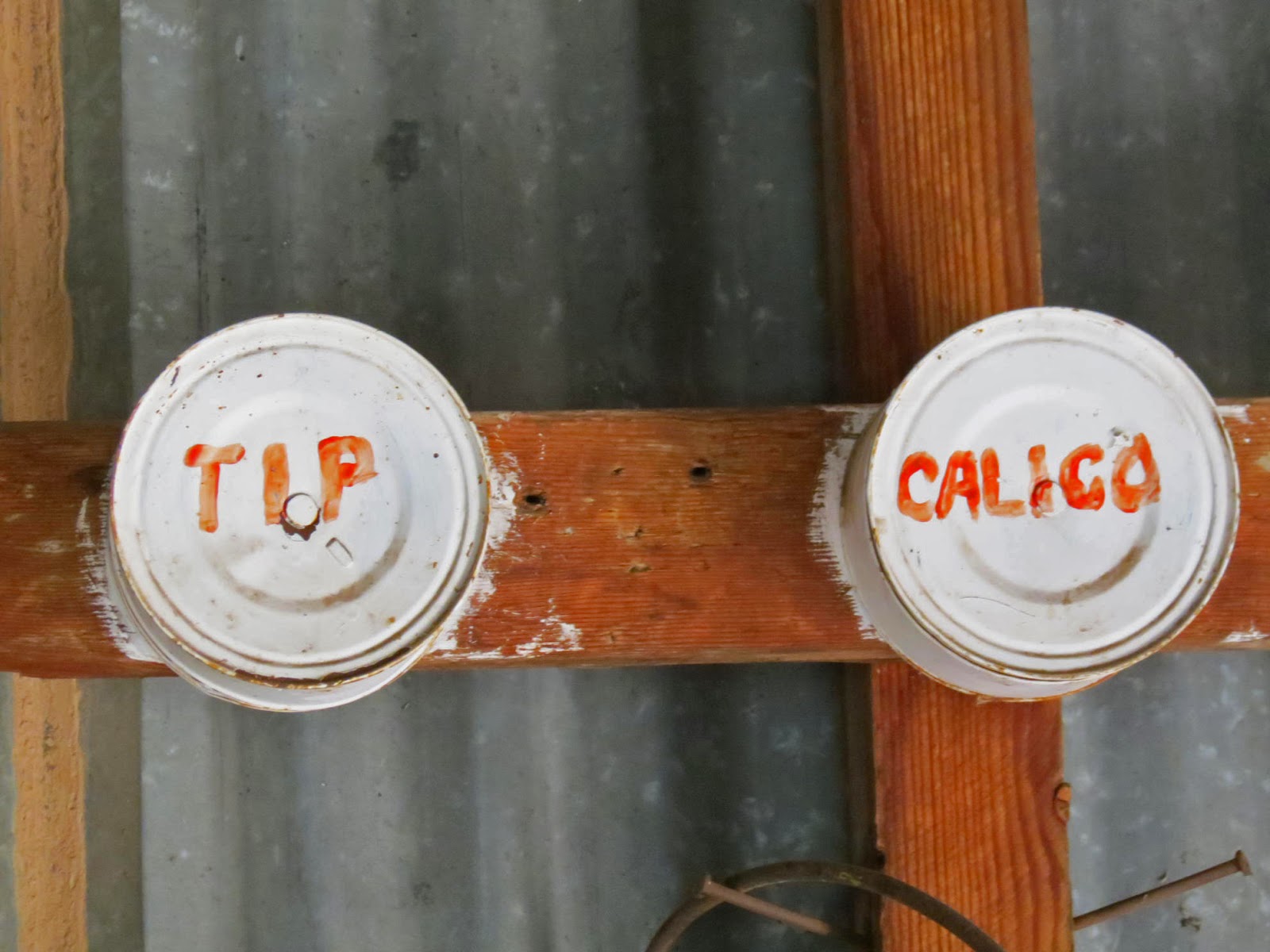 And here are a couple of shots he suggested, the first for its composition, the second because it made him think of a fellow Michigan painter friend who winters in Florida. If that painter sees this, he will understand. 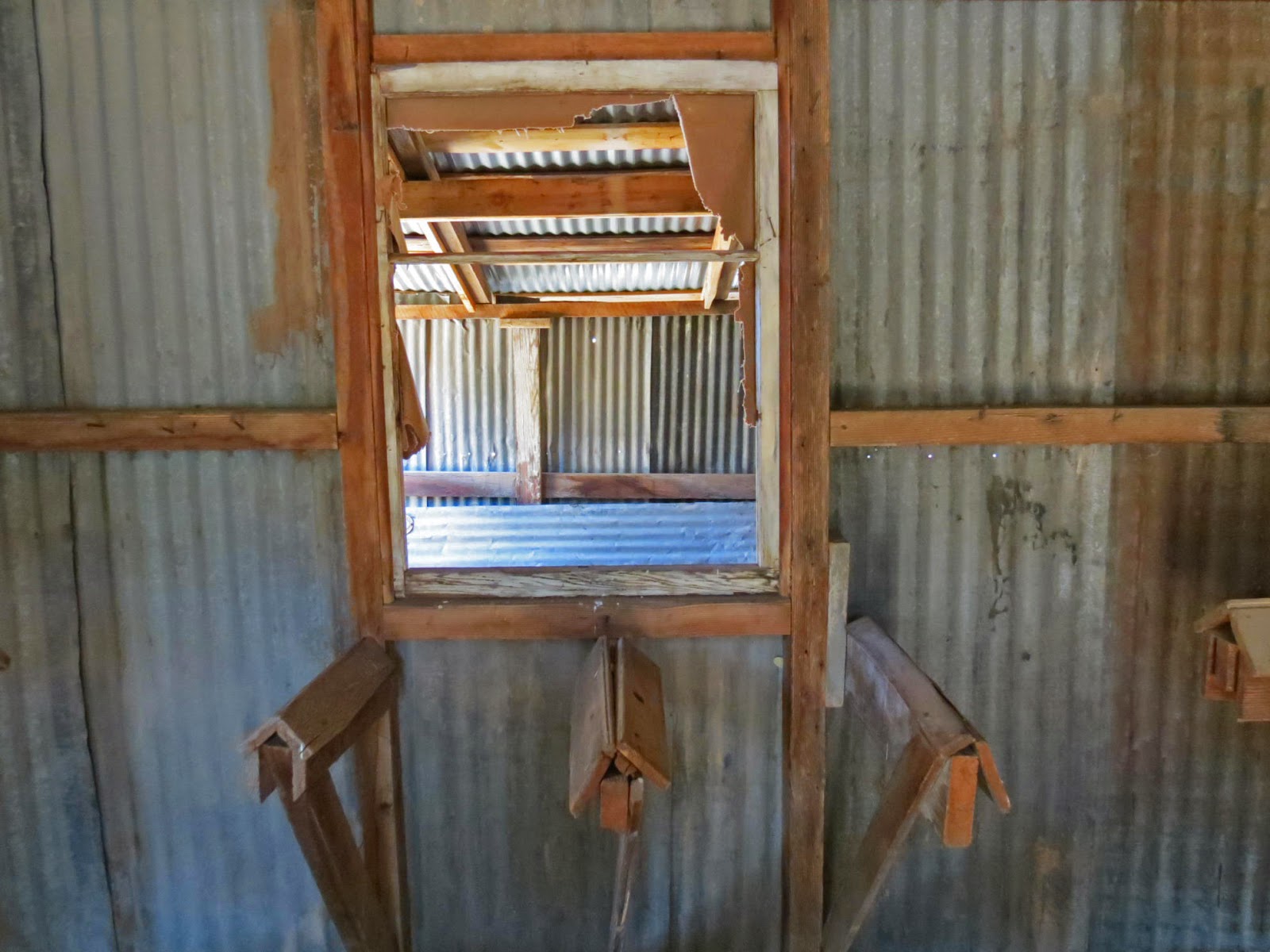 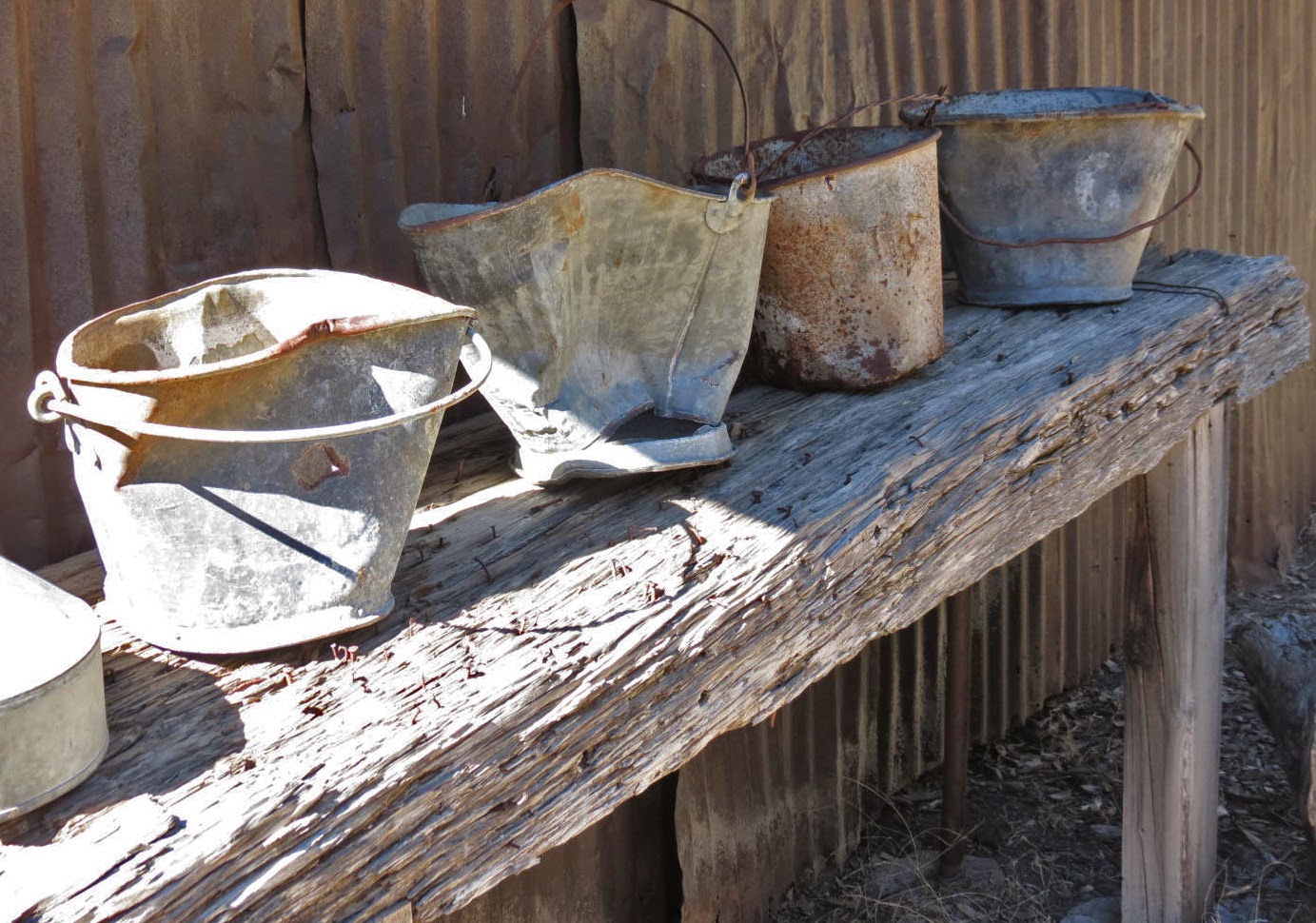 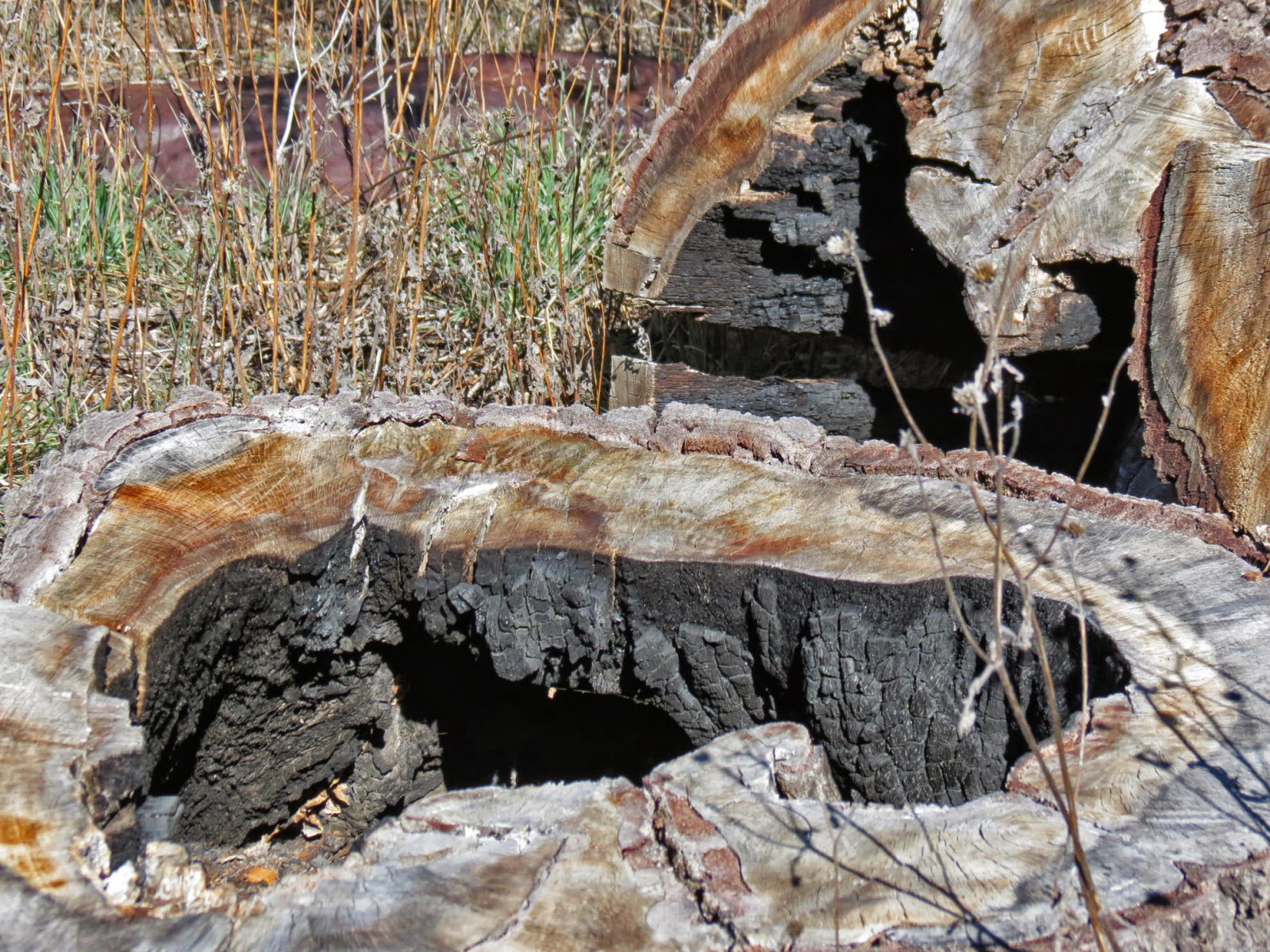 After soaking in the atmosphere of Faraway Ranch, including following the Bonita Canyon trail (trod very recently by horses, I observed) far enough to see evidence of a tree struck by lightning (above) and burned from the inside, we went on to find a shady picnic table for our late morning shack of nuts and dates and raisins. It was a surprise to find that the beautiful, elegant mountain bluebird is as greedy a beggar as blue jays back home in Michigan. The explanation came later, when I checked Peterson’s Western Birds and realized that the little beggars were gray-breasted jays, a species of jay lacking a crest. That identification made much more sense of their behavior. 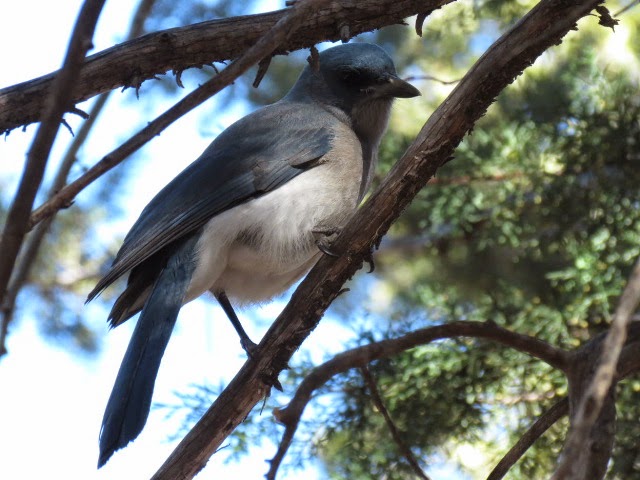 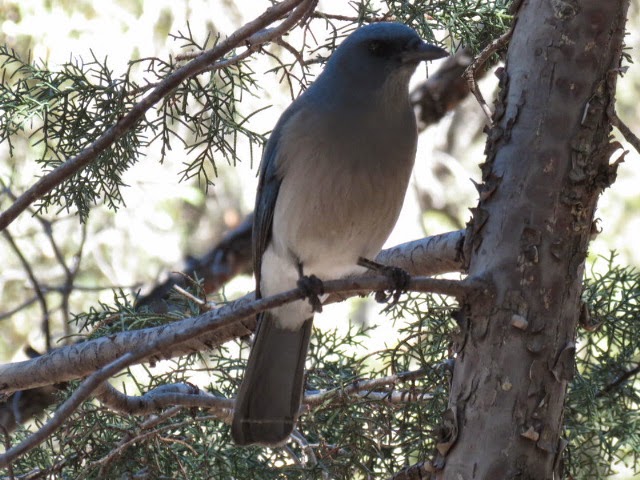 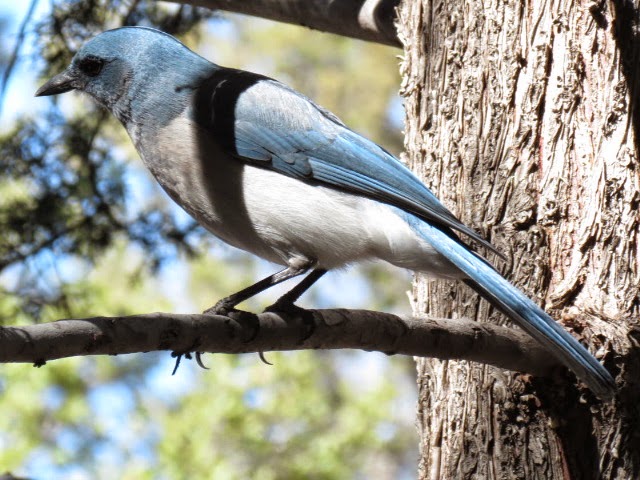 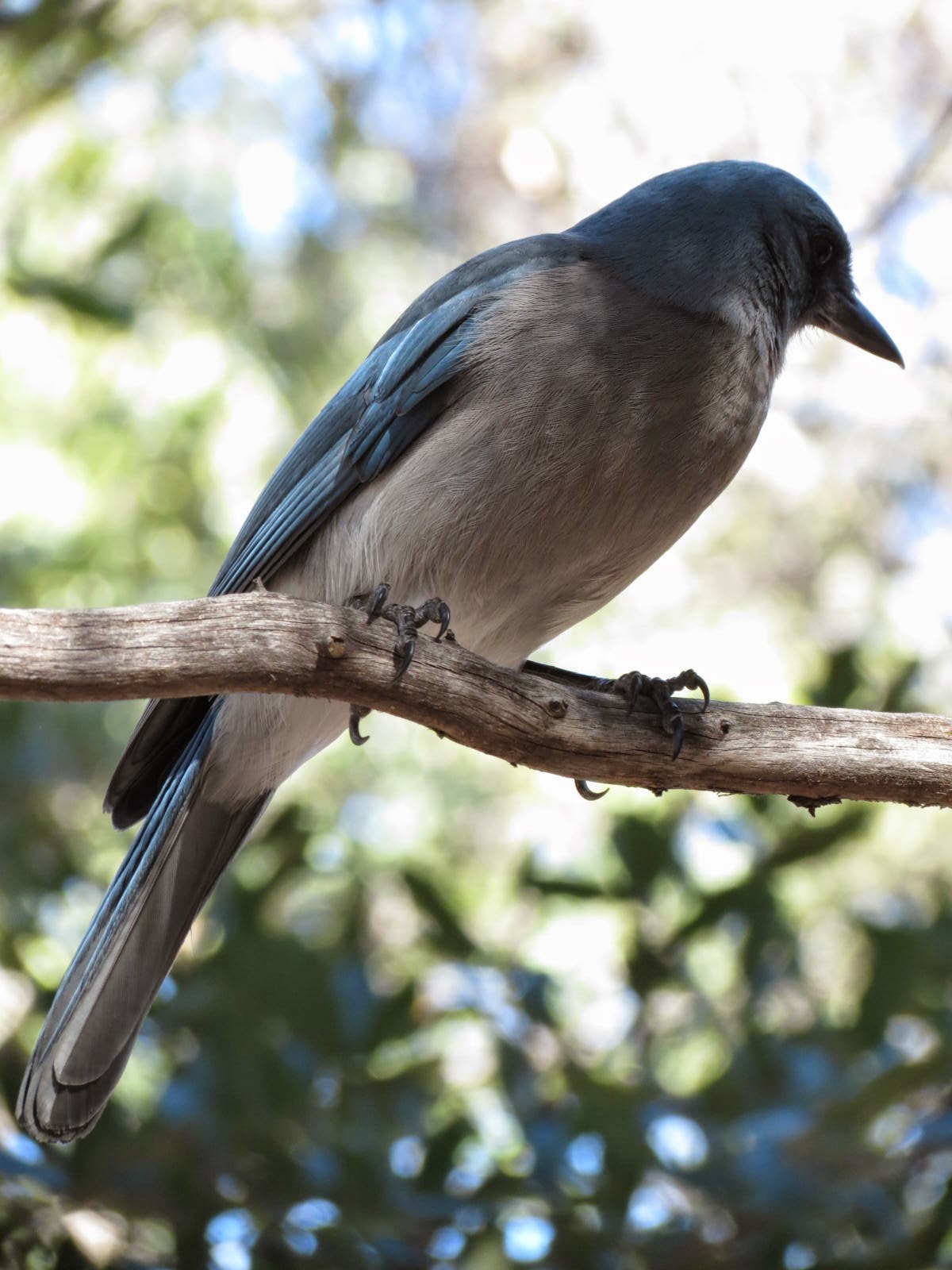 (The pair I saw idown n the wash at home last week, however, were mountain bluebirds, I'm sure)

Leaving the park, we decided to follow 191 south by Turkey Creek ranch. Turkey Creek is an important name in the Chiricahuas, as the highest peaks in the Chiricahua National Monument are remaining sections of what geologists call the Turkey Creek caldera, formed during volcanic eruptions about 27 million years ago, depositing ash over an area of 1,200 square miles. The ash slowly compressed to form welded tuff that is 800 feet thick in the Monument. 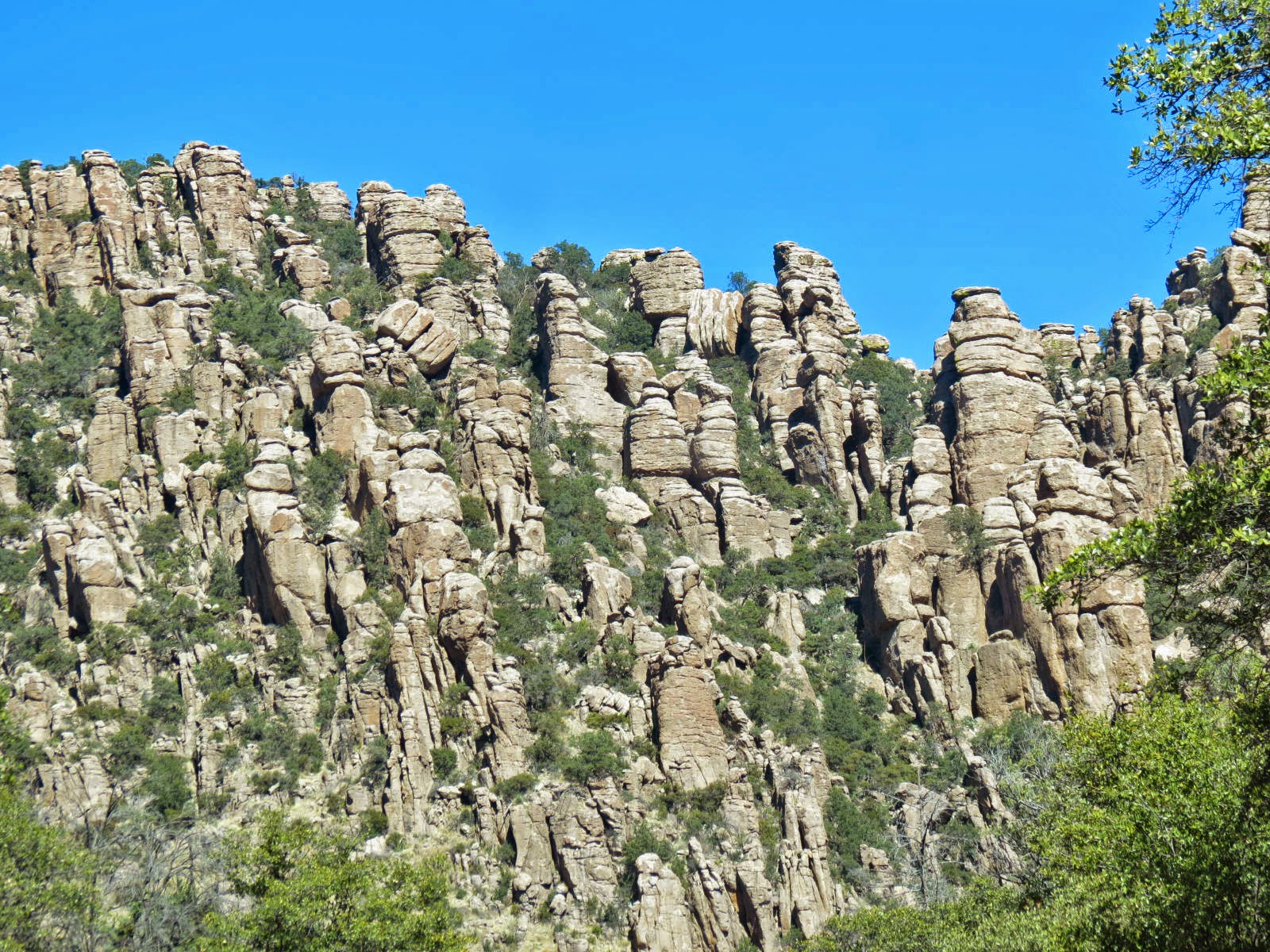 The cooling ash deposits contracted, joints developed, and cracks in the rock became accessible to running water, frost, plant roots, and organic acid. It was this erosion that created the monumental pillars. It was after that, between five and twenty-five million years ago, that changes in the movement of tectonic plates pulled and stretched the earth’s crust, tilting fault systems to create the mountain ranges and basins we see today. The Chiricahuas, Dos Cabezas, and Dragoons were all formed in this way.

But that was long, long, long ago. What interested us more as we drove south through ranchland was the absence of water. We crossed one dry wash after another, dry, rocky streambeds nothing but dips in the road and empty meanders off through the trees, the trees a clear sign that water does sometimes flow here.

And then – and then – can it really be? Running water! It is amazing how one’s heart leaps at the sight of running water in this arid region. The joy is almost beyond belief. We shout and laugh and smile – and we imagine how the sight would have appeared to dusty pioneers in awkward wagons pulled by tired horses or oxen. 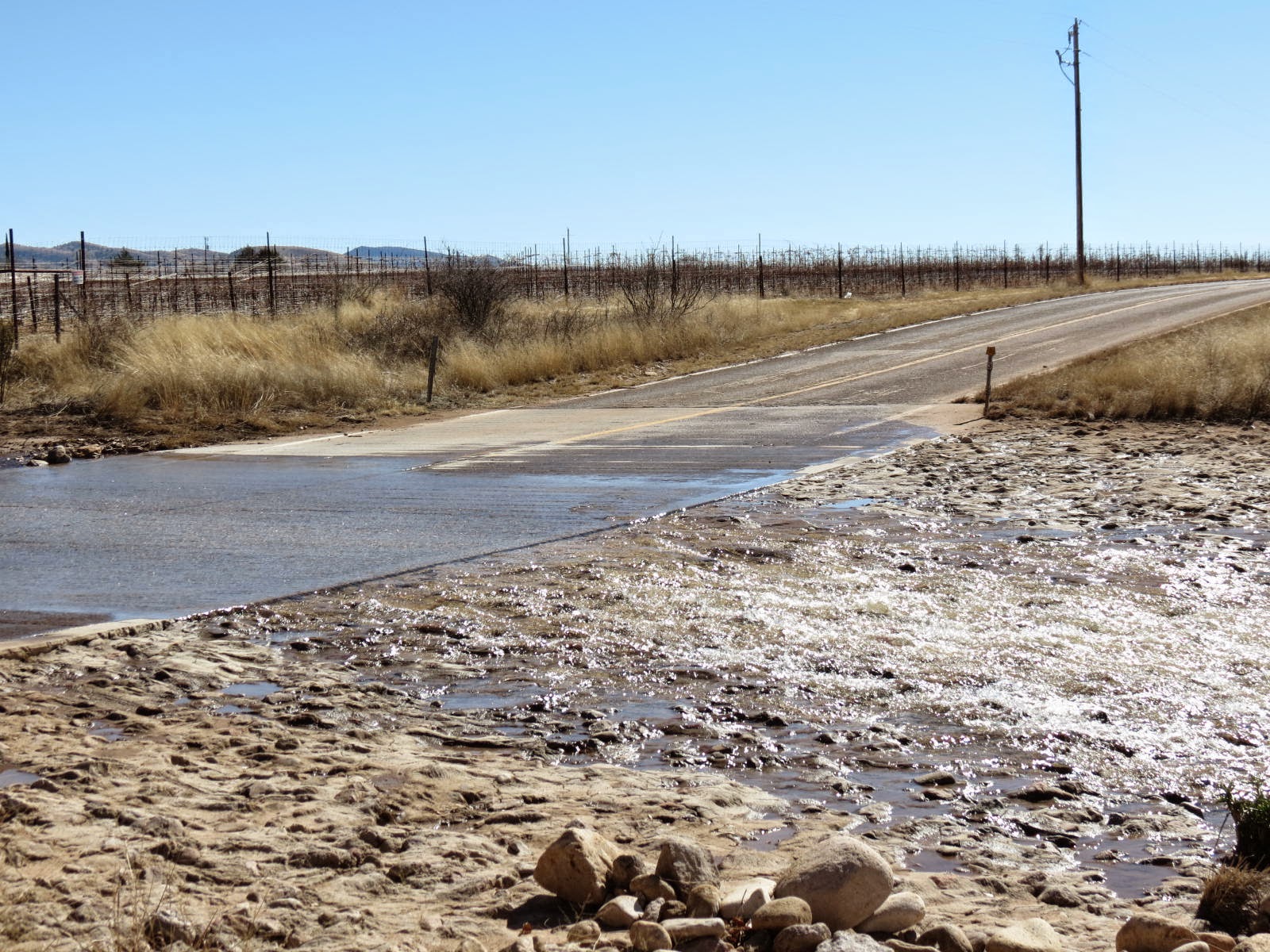 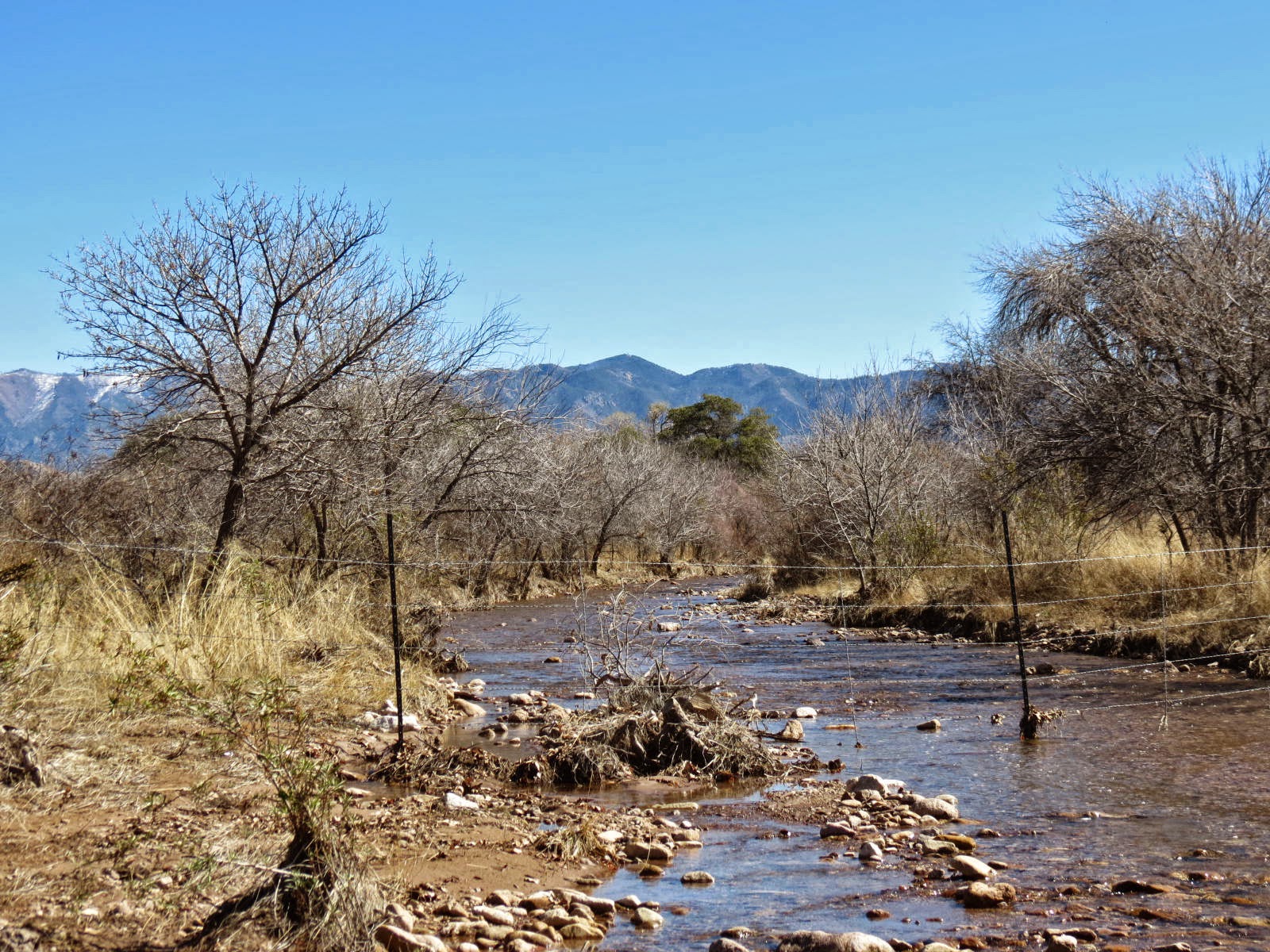 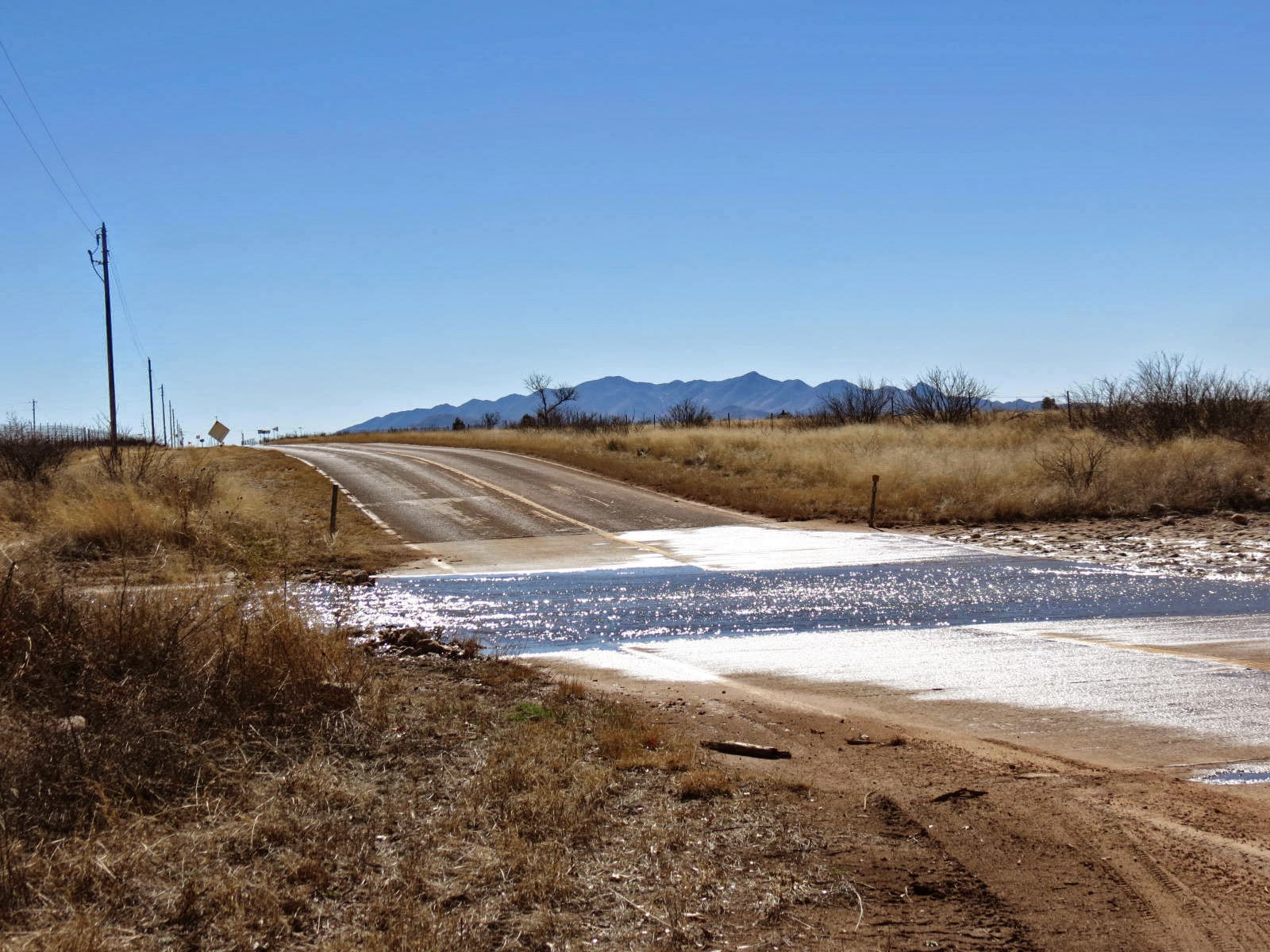 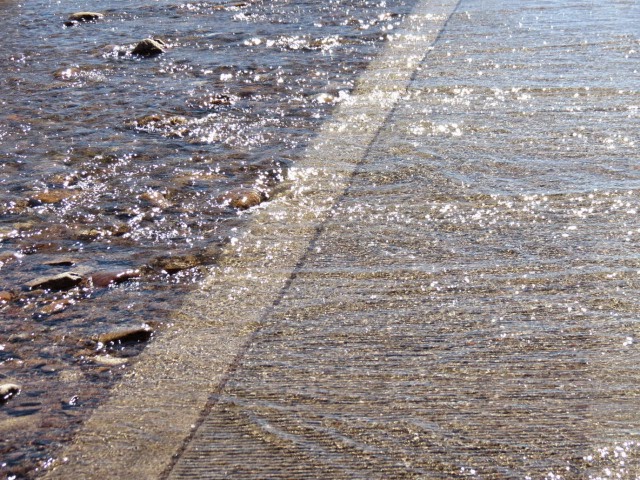 Turning west and then north, we crossed the huge basin bordered by the Dragoons, the Chiricahuas, and the Dos Cabezas. Farther north a bit later we had the huge Willcox Playa on our right (more about that another time), and ahead of us the snow-capped Pinalenos. A combination of constant map-reading, ever-present landforms, and long sight distances has oriented me pretty well to northern Cochise County, with the twin peaks of Dos Cabezas always leading home. 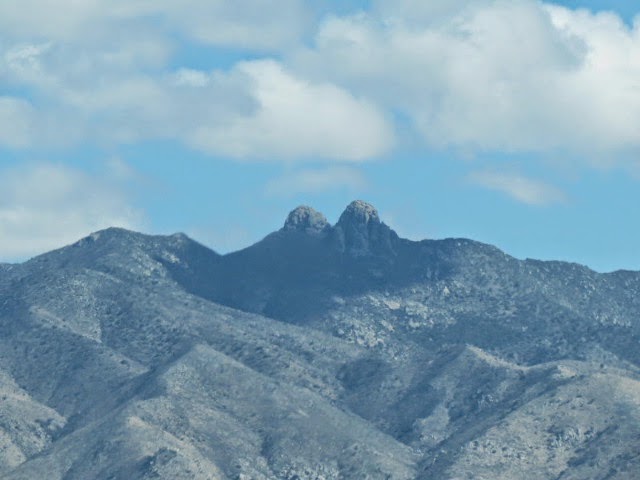 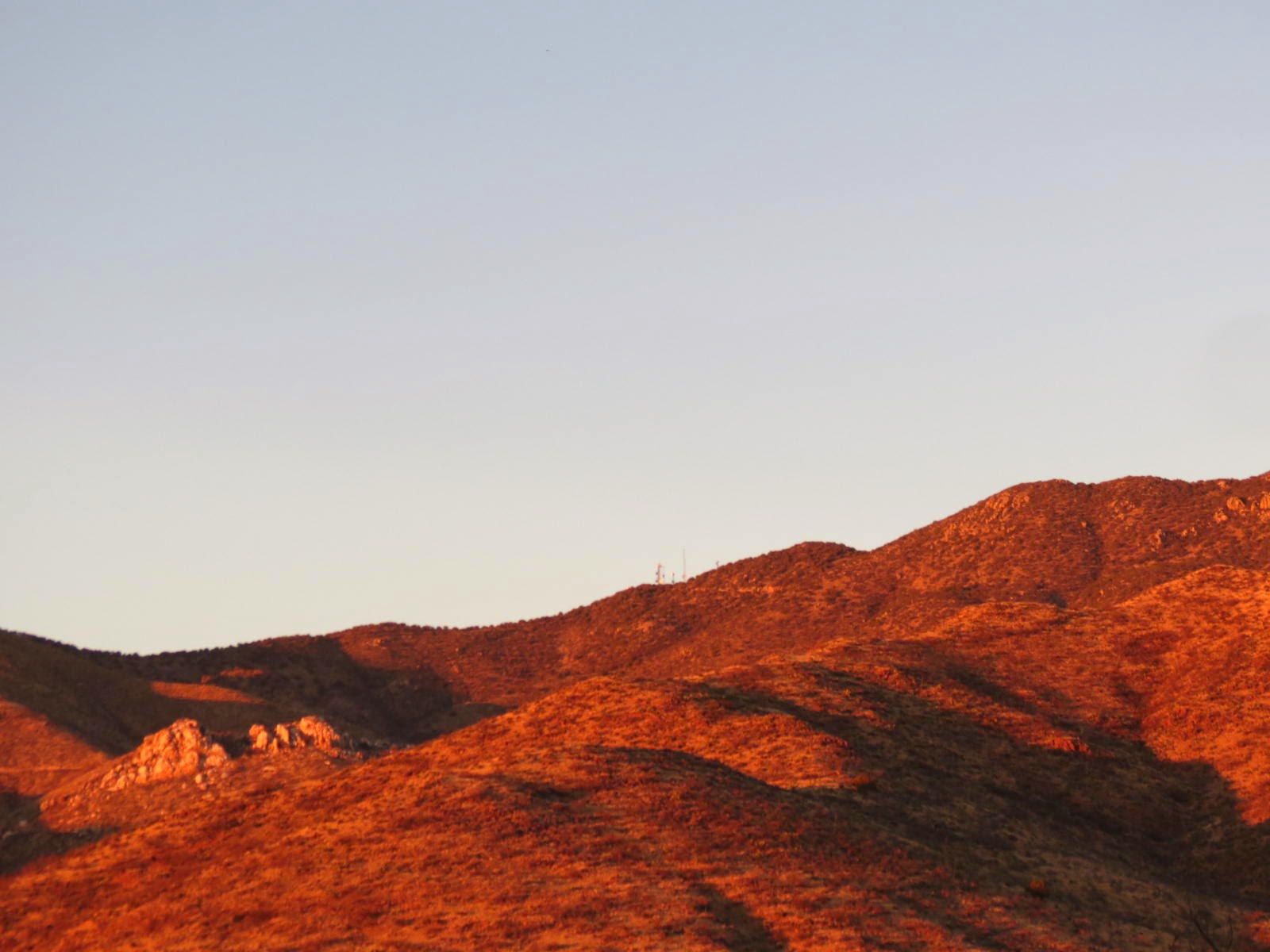 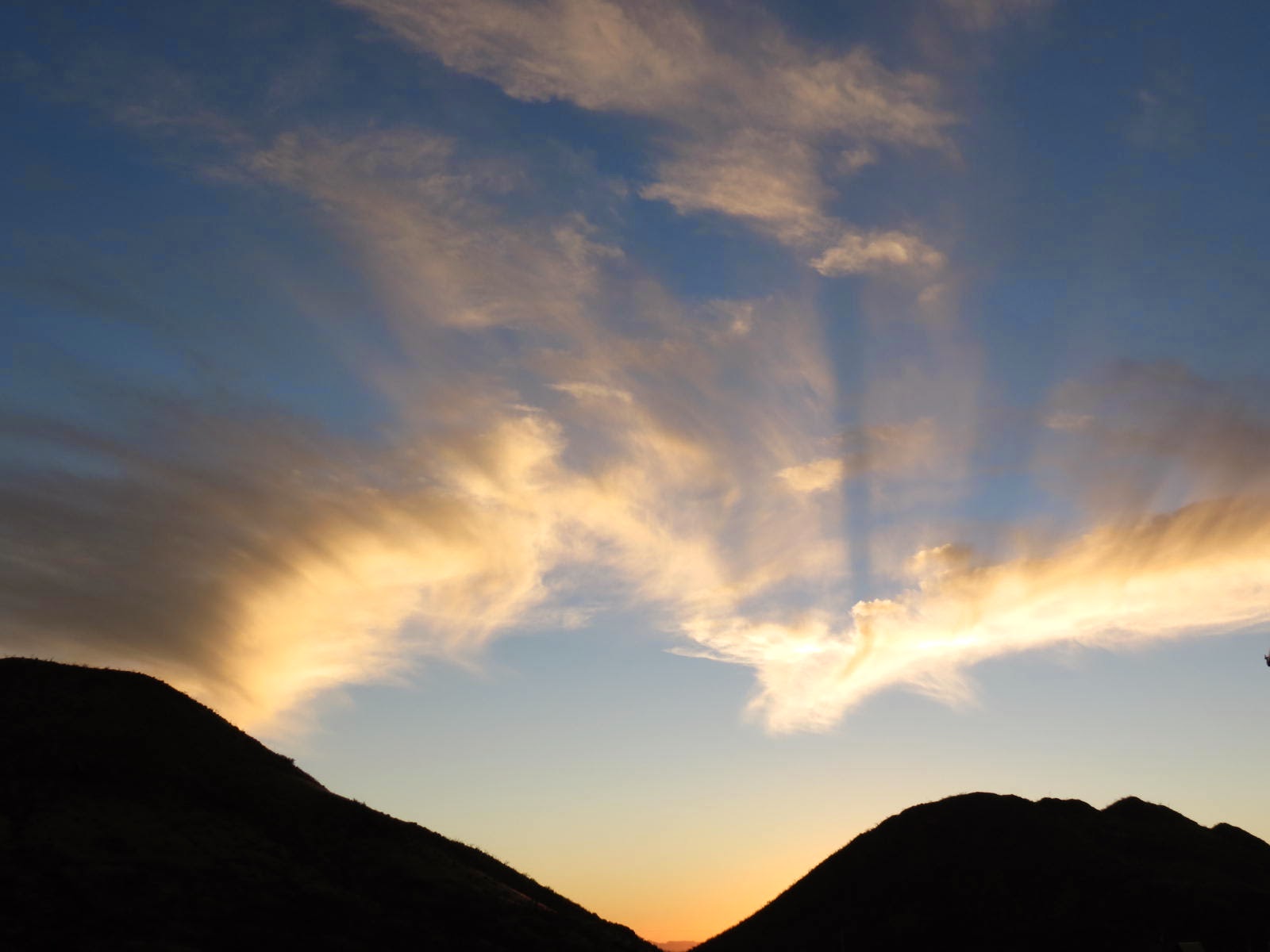 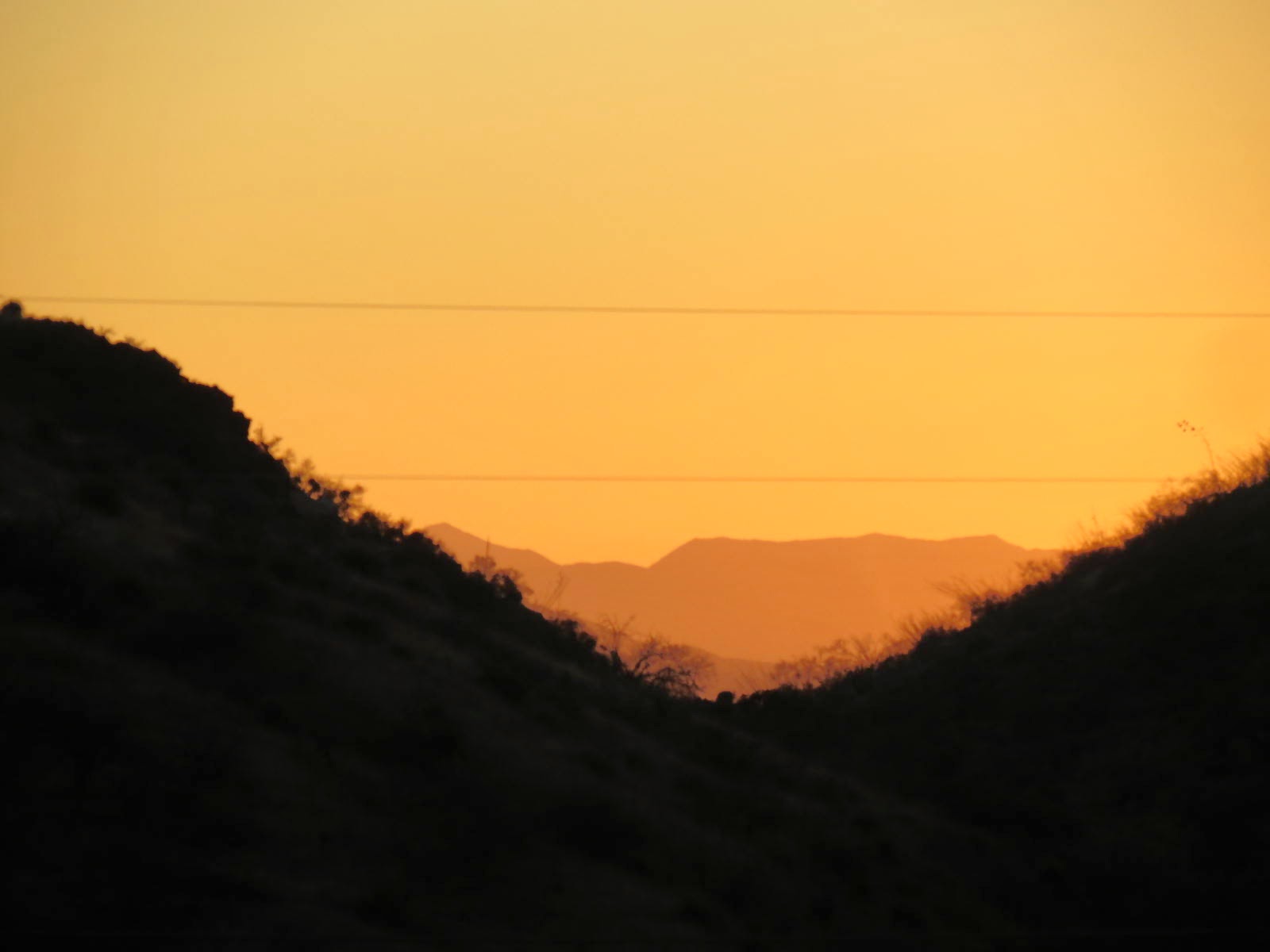 Pamela,
I want to know more about Faraway Ranch. What era did the lady who lived into her 90's live in? Very interesting.
You and David are having a wonderful time. I love this, for you. I have to go back and read every blog since you started this trip.
I miss you two! Love, Melanie

Wonderful images! I loved the jay shots and wonder if their call is as strident as our blue jays. But those last four mountain shots are gorgeous. The light is stunning in each. I think wires should be outlawed in a scenic areas. :-(

It is amazingly beautiful, Dawn. Mel, I'll make a point to take better notes on the Ericksons the next time we're at the ranch site. Of course, you realize that all the Chiricahua Apaches were moved off this land, "concentrated" (deadly word!) on reservations, before a lot of ranching took hold. The call of the jays is pretty strident, Karen, and that should have tipped me off right away.

Thank you all for visiting and commenting! It makes me want to continue the story.