In My Dreams, I Have Always Been a Cowgirl. Was That a Singing Cowgirl?

It’s true. Ask my mother. My very earliest career aspiration was cowgirl. Later came veterinarian, poet, singer, actor, writer, philosopher, and, finally, bookseller. But girlhood cowgirl dreams are like creeks during drought times: they may go underground for years, but they never die.

When David read about a weekly livestock auction in Willcox, he knew that expedition had my name on it, and we drove over a couple days beforehand to make certain of the location. Cochise County leads the state of Arizona in cattle production, making Willcox (and not Bisbee, the county seat) the Cow Capitol, so I guess that makes the Willcox Livestock Auction (WLA) Arizona’s Cattle White House. 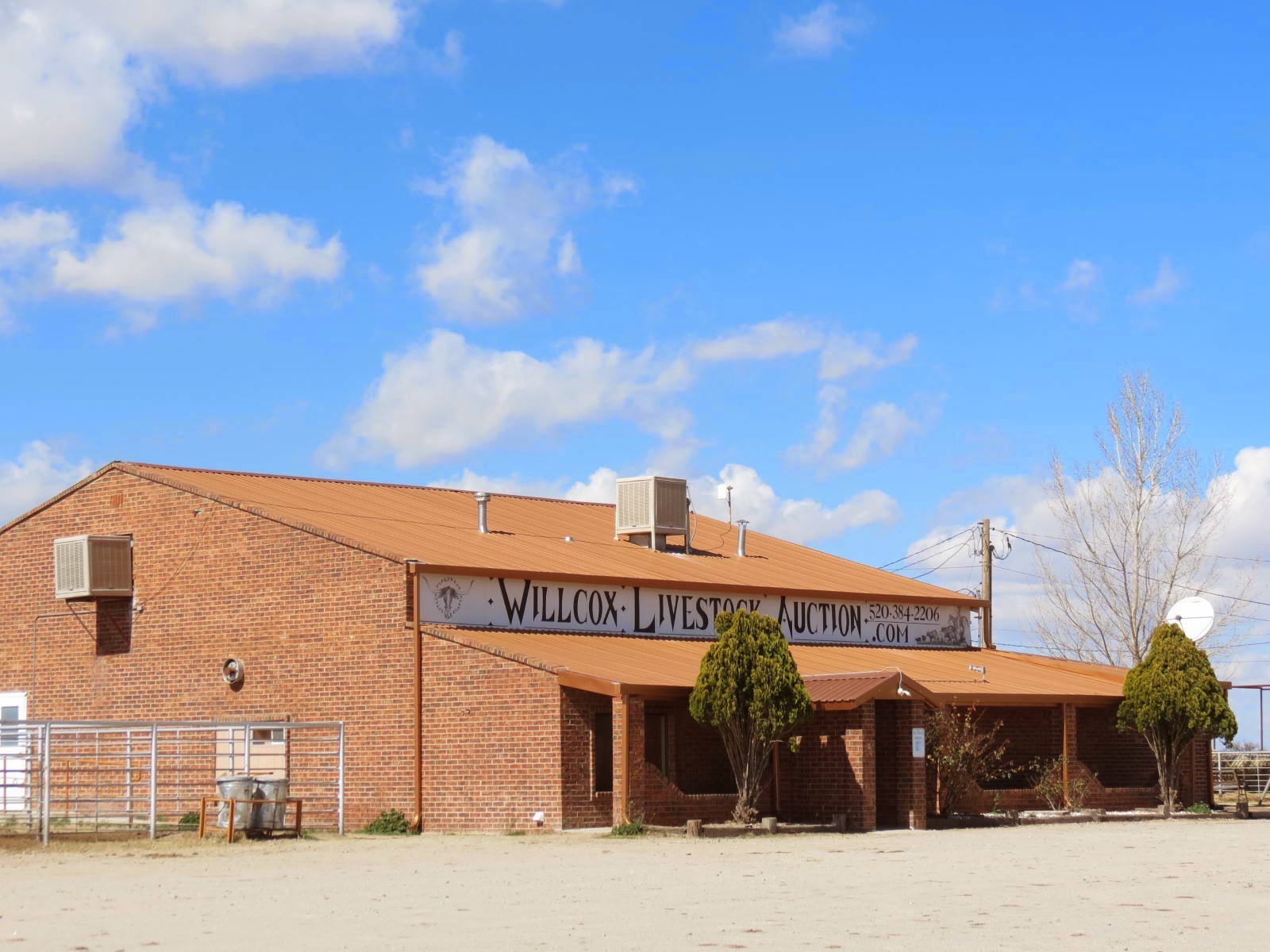 Thursday finally came! Auction day! I wish I could include here the feel of the hot sun, the sound of calves bawling, and the smell of the dust and the cattle and the horses and the hay. I wanted to be everywhere at once – watching the riders and horses work the cows, 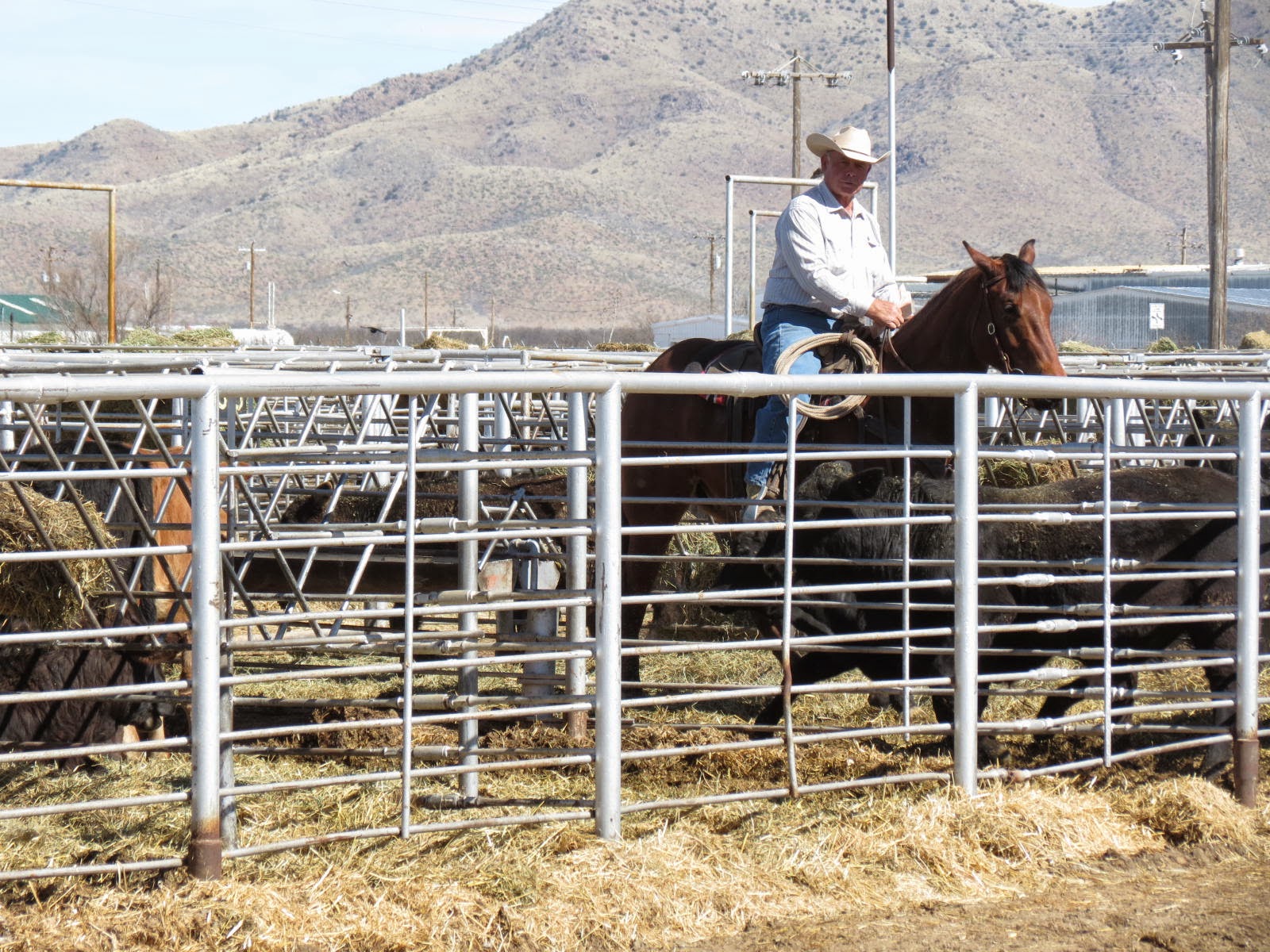 inside where the calves came in one side to be auctioned off and then scrambled out the other side when the gate was opened, 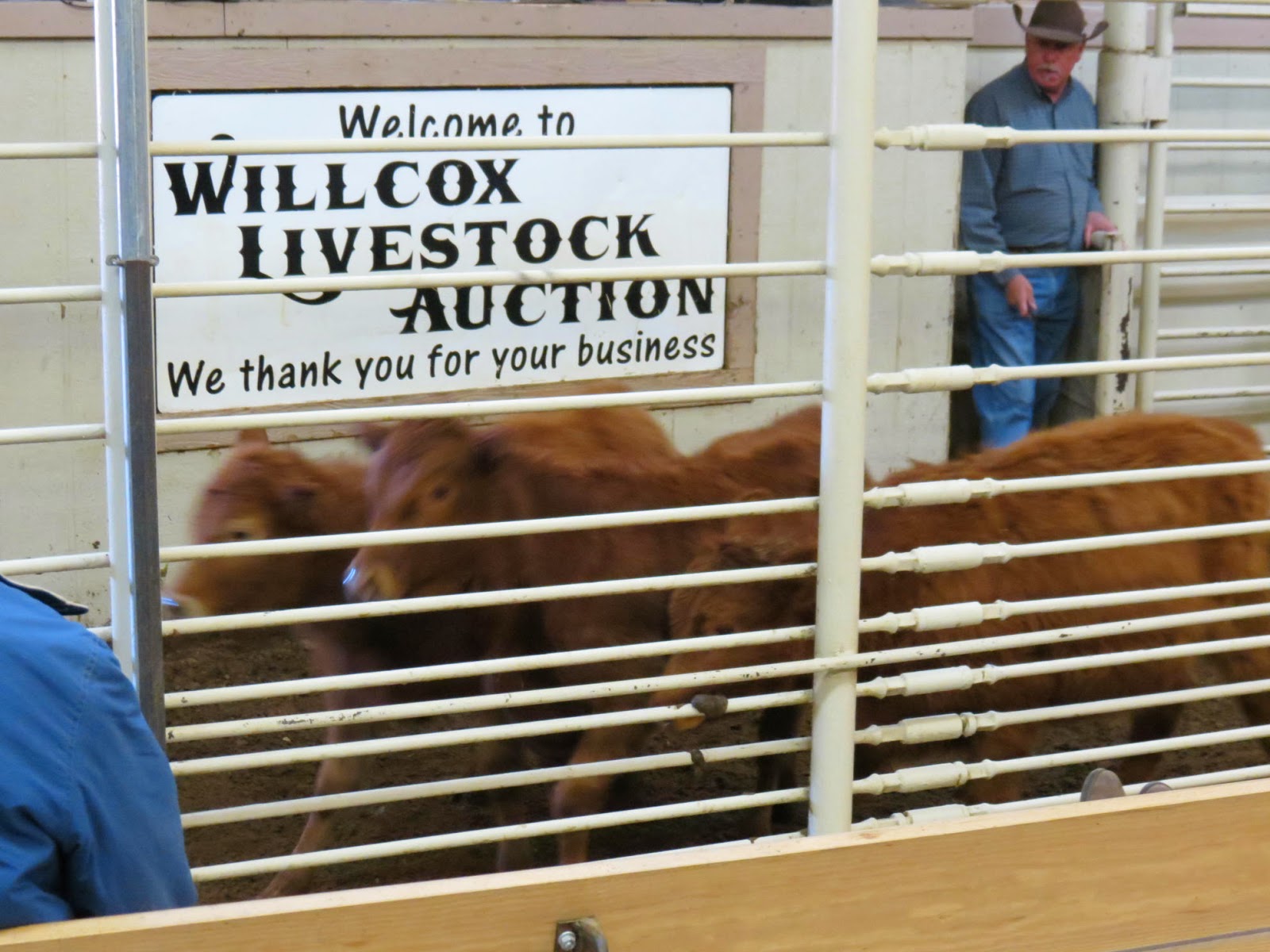 out by the pens where groups of calves awaited their turn in the auction house, 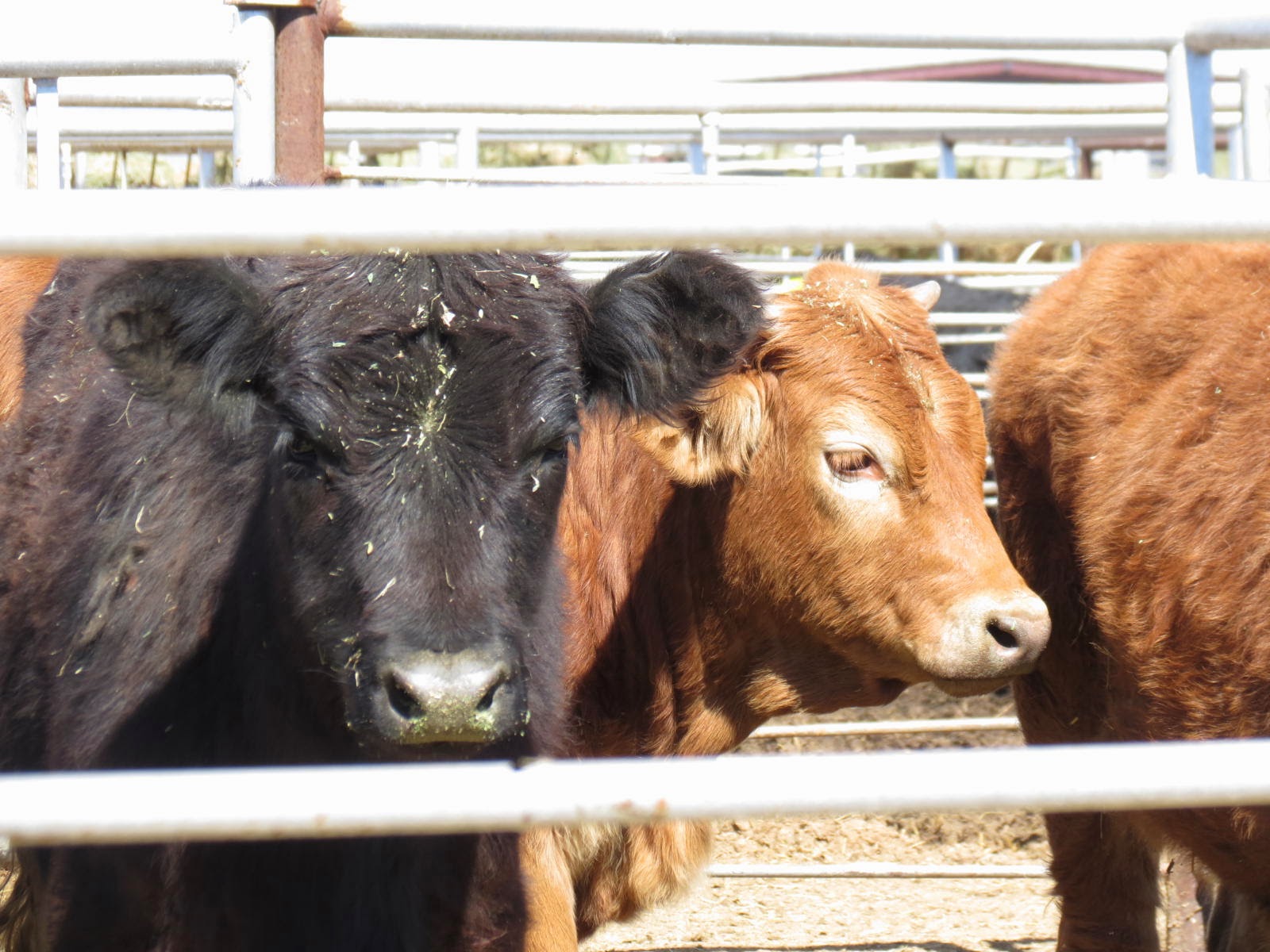 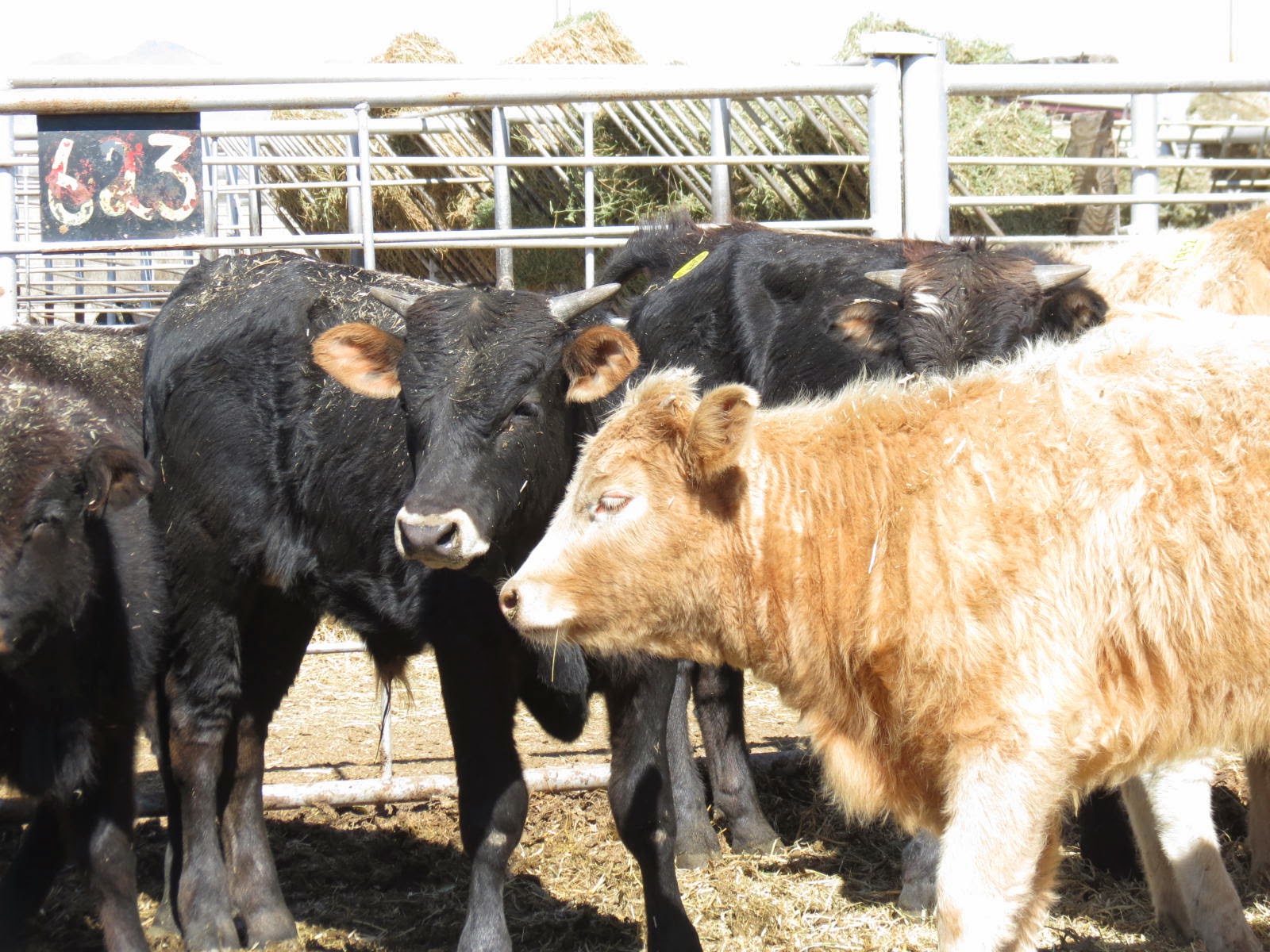 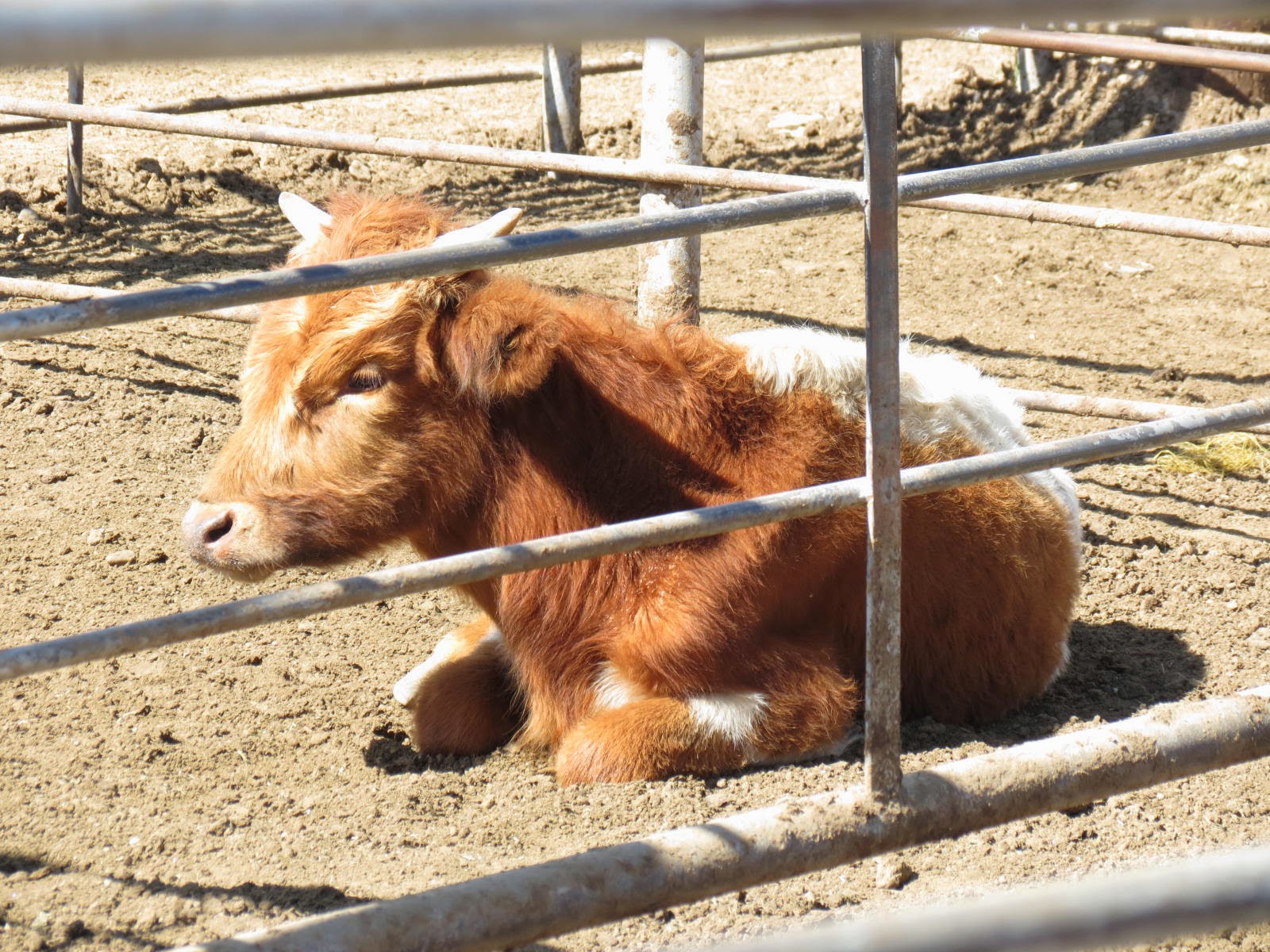 and especially in the outdoor stall shelters where the cowhorses, in turn, took breaks from their demanding work. 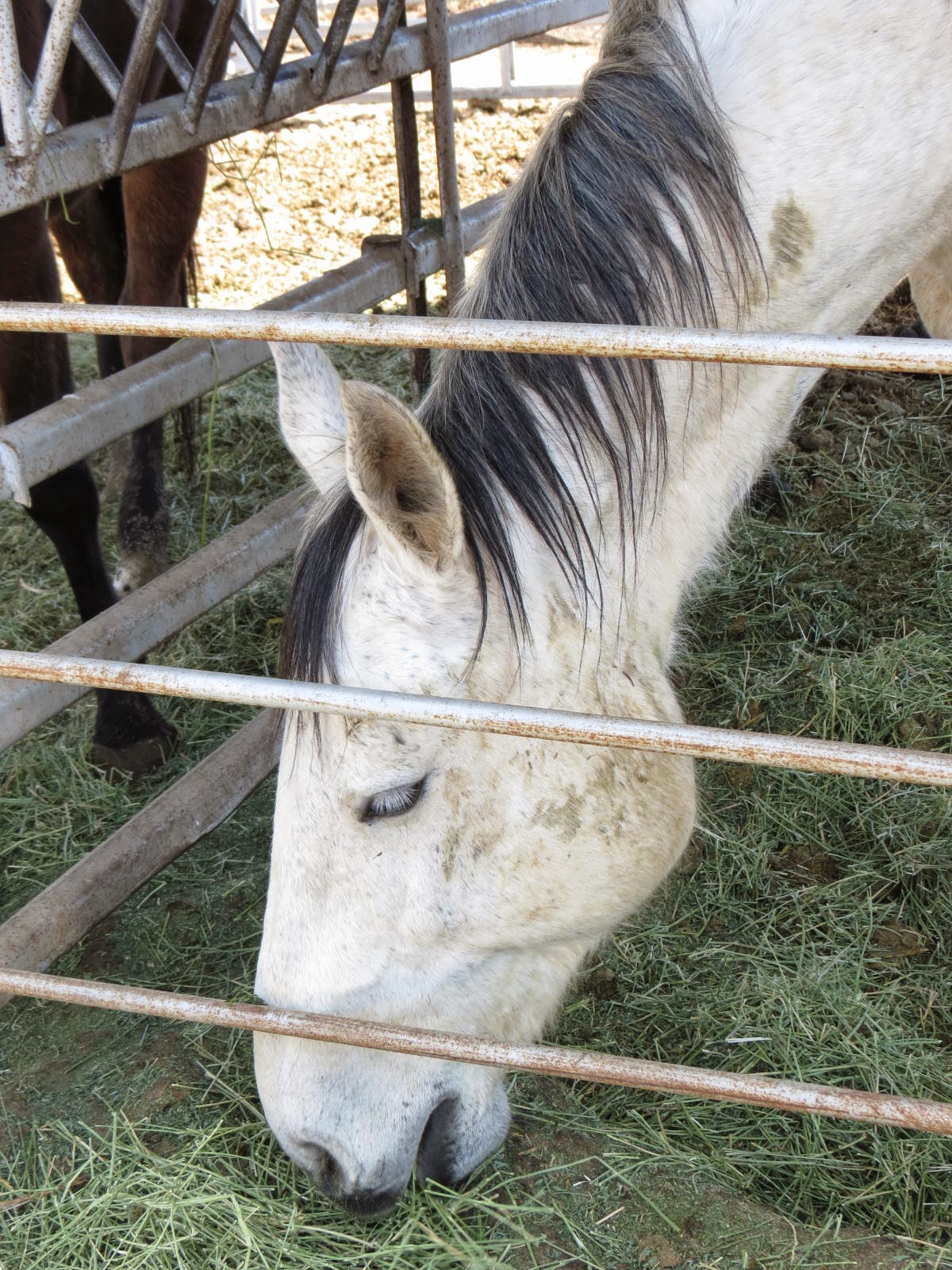 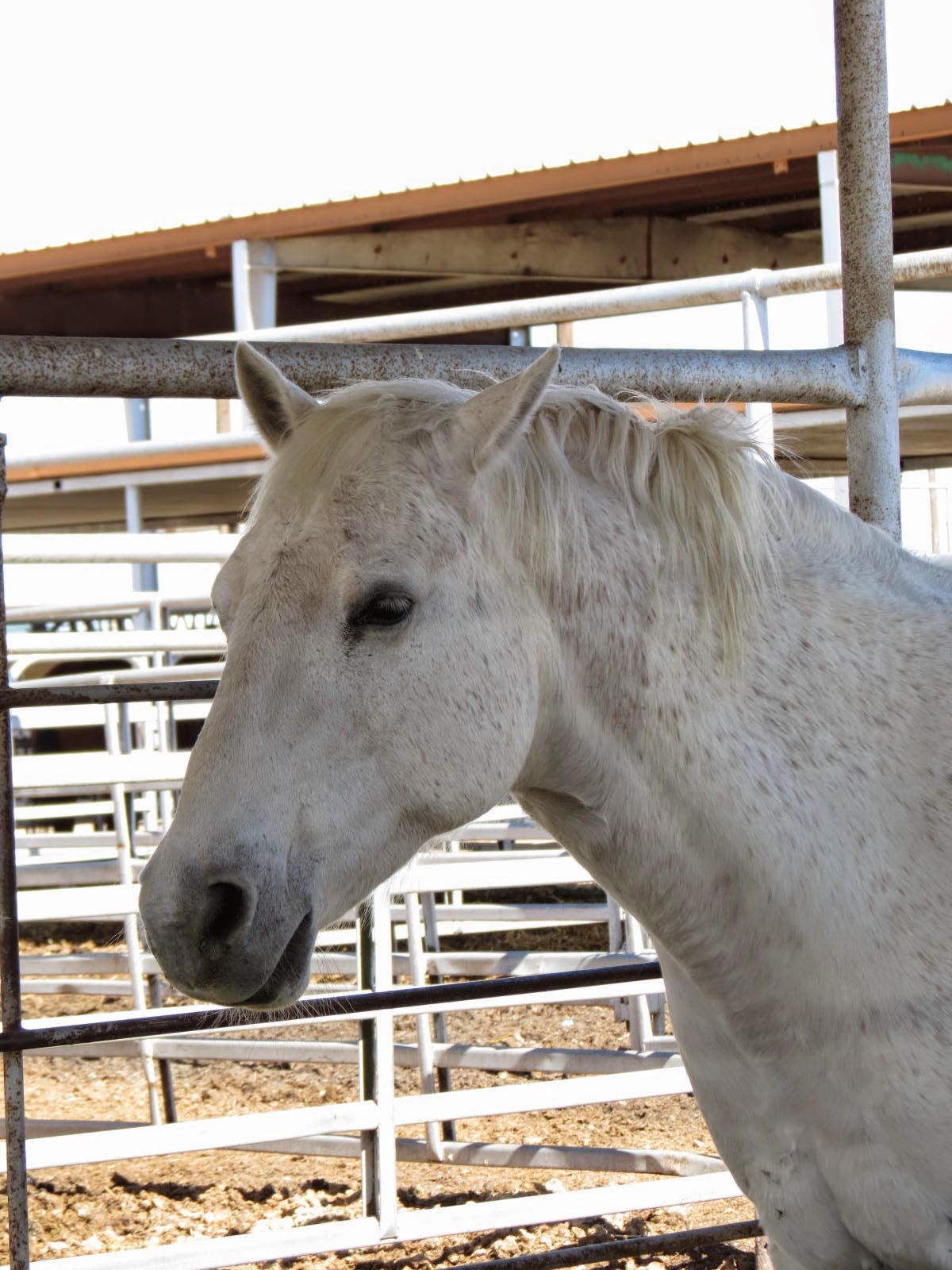 I wanted to be on a horse, too, and also flicking a flyswatter at calves to move them from one side of the auction “ring” to the other, and I wouldn’t have said no to opening and closing an auction ring gate.

We sat indoors a while to watch the buying and selling and at first weren’t sure about the prices being knocked down. Per lot, or per animal? Because sometimes as many as eight would come through at once. Light dawned at last: the calves were being sold by the hundredweight. So if a 500-lb. calf brought in a $120 selling price, that calf would cost the buyer $600. It made sense.

We went outdoors again, into the sunlight, to watch the horses and riders work the cows (Midwesterner that I am, it’s hard for me not to put that word in “scare quotes,” when we’re talking calves and often steer calves) through a complicated system of pens and gates on their way to the auction ring. A man in a cowboy hat, walking by the pens with his little grandson at his side, asked, “You folks buyin’ today?” “Not today,” David answered. “Just lookin’ today.” David was wearing his cowboy hat, and his boots were appropriately scuffed and dusty. Two little boys looking for adventure caught their mother’s distant but vigilant eye. “You boys get outta that pen right now!” 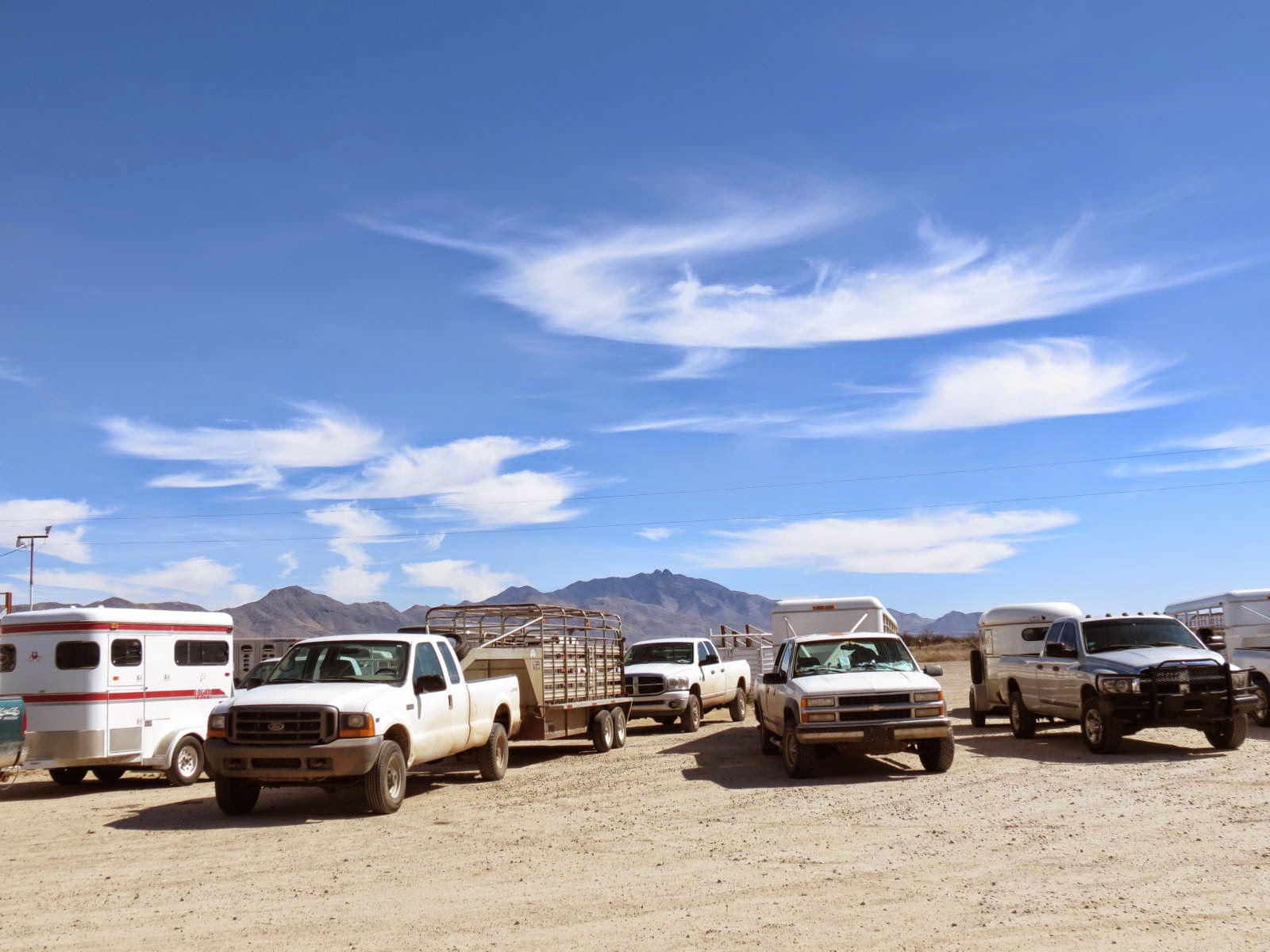 As we were leaving, I was surprised to see one truck pulling out with an empty livestock trailer but quickly realized the driver must have been selling that day, not buying. We left in a Toyota sedan with a Michigan license plate. What did people conclude from that? 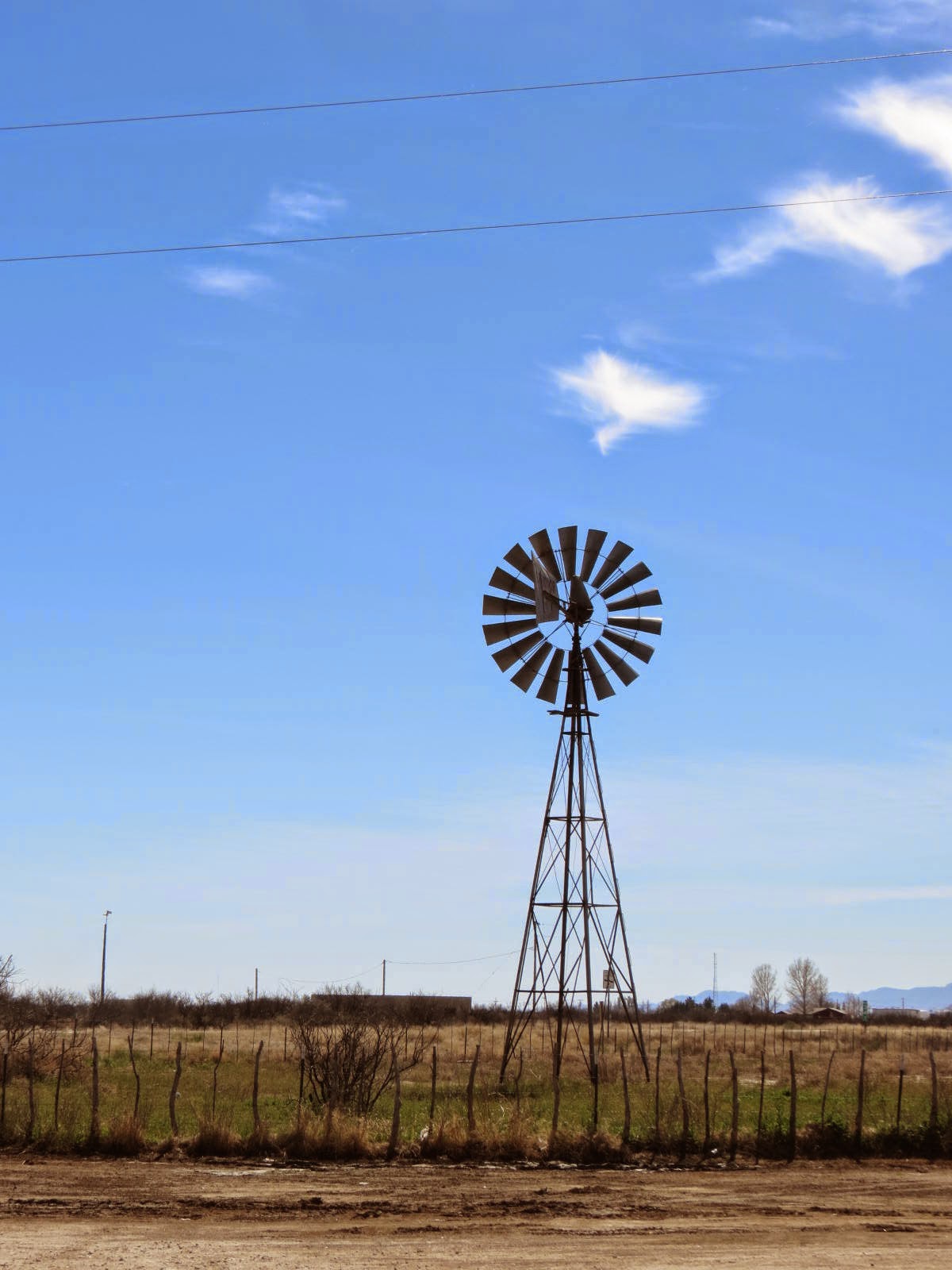 I could have stayed all day. I could go every day and stay all day! As we came back down Haskell Avenue into town, I noticed the new custom T-shirt shop open in an old gas station. “COWGIRL IN MY DREAMS,” I told David. “That’s what my t-shirt would say. And I bet a lot of other women would love it, too!”

But the day was not over yet. After a lazy interlude of iced tea and corn nuts at Railroad Park, we went home to rest, have a light supper, change clothes, and then – 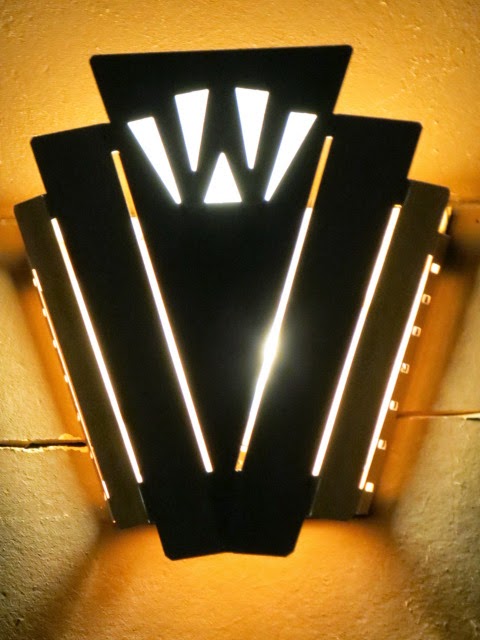 I’m not kidding. It was Les Noces de Figaro, i.e., “The Barber of Seville,” a videocast from the Opera de la Bastille in Paris, France, and we saw it at the Willcox Historic Theatre in Willcox, Arizona.

The tickets were only $5 each! Never could we have seen such a show at that price in Northport or Traverse City, let alone in Paris! But yes, ladies and gentlemen, it’s true: for a mere $10, the artist and bookseller on winter sabbatical were transported to Paris for the evening. I couldn’t believe it was happening! 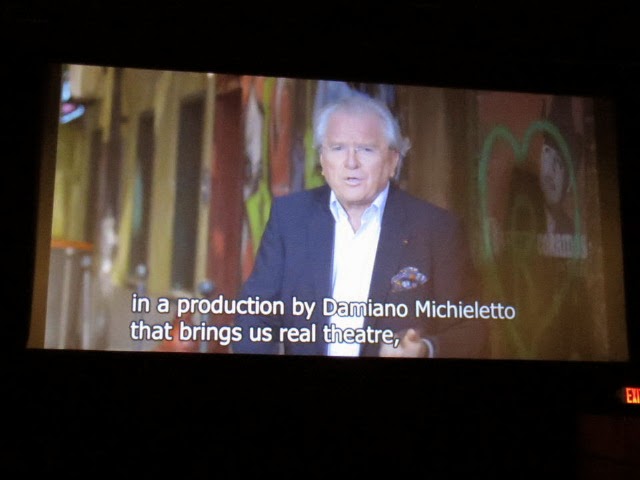 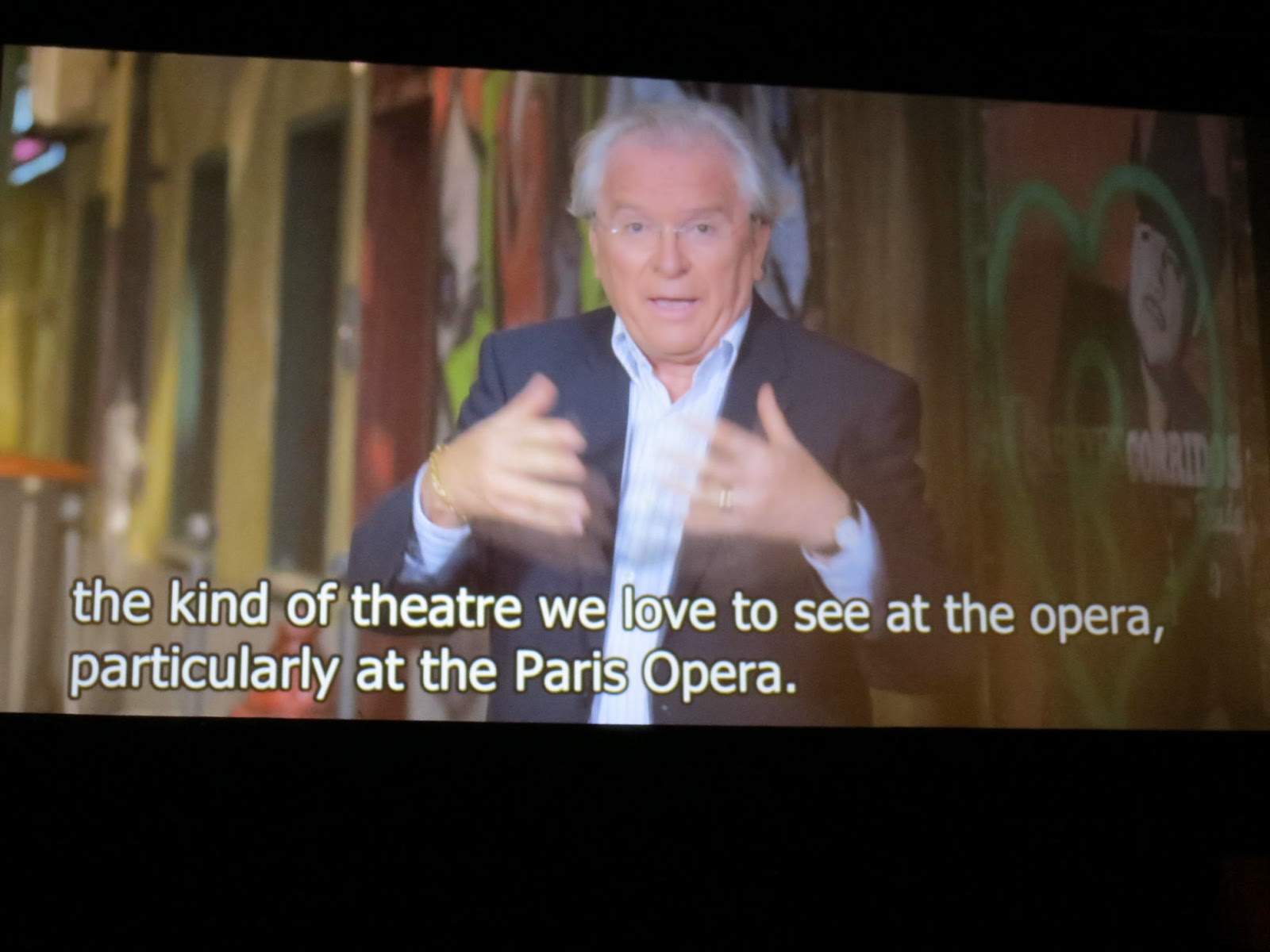 There was the handsome, urbane but enthusiastic announcer (whose name has escaped me), introducing the production in French (with, as you see, English subtitles for export audiences), and indeed, after a magnificent orchestral overture, the curtain rose, and we were there, in the Opera de la Bastille, watching Damiano Micheletti’s electrifying 20th-century staging of this well-known work.

I didn’t take any photographs during the opera itself. Even though the performers were not, in person, onstage in the theatre with us, it just didn’t seem right. Here, though, is the barber, a perfect Figaro! 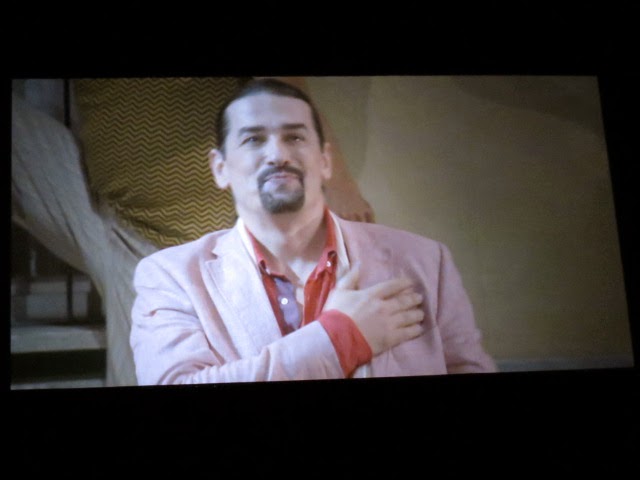 And here is the chorus, taking their curtain call, a shot that shows you part of the two stories of the fantastic four-story revolving stage set. 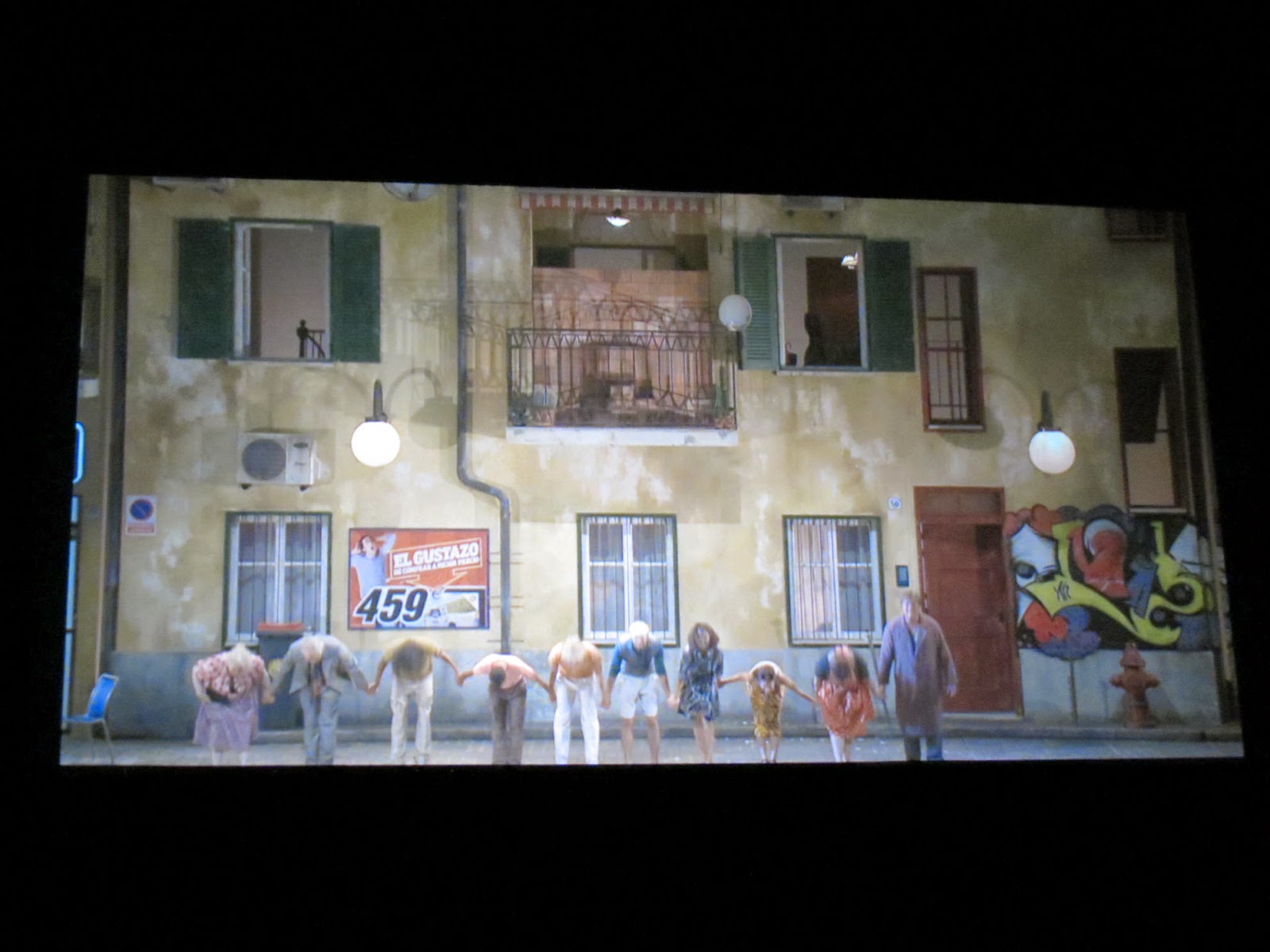 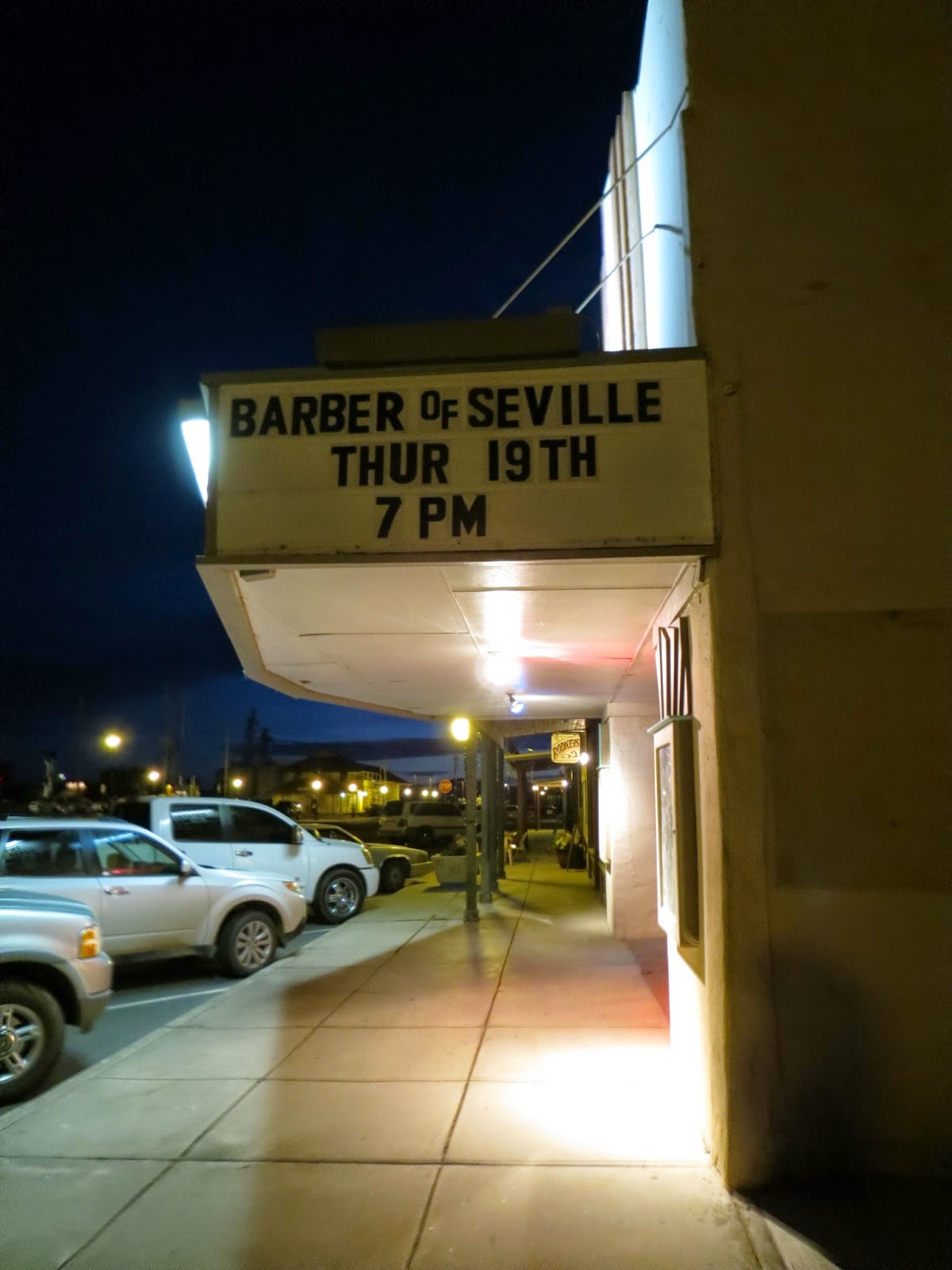 My heart had wings, there were stars in my eyes – and yet, on the way home, I kept an alert eye on the road ahead for javelinas and coyotes. We’d seen two dead javelinas on the side of the road the morning before, and they didn’t look like anything we’d want to run into ourselves. 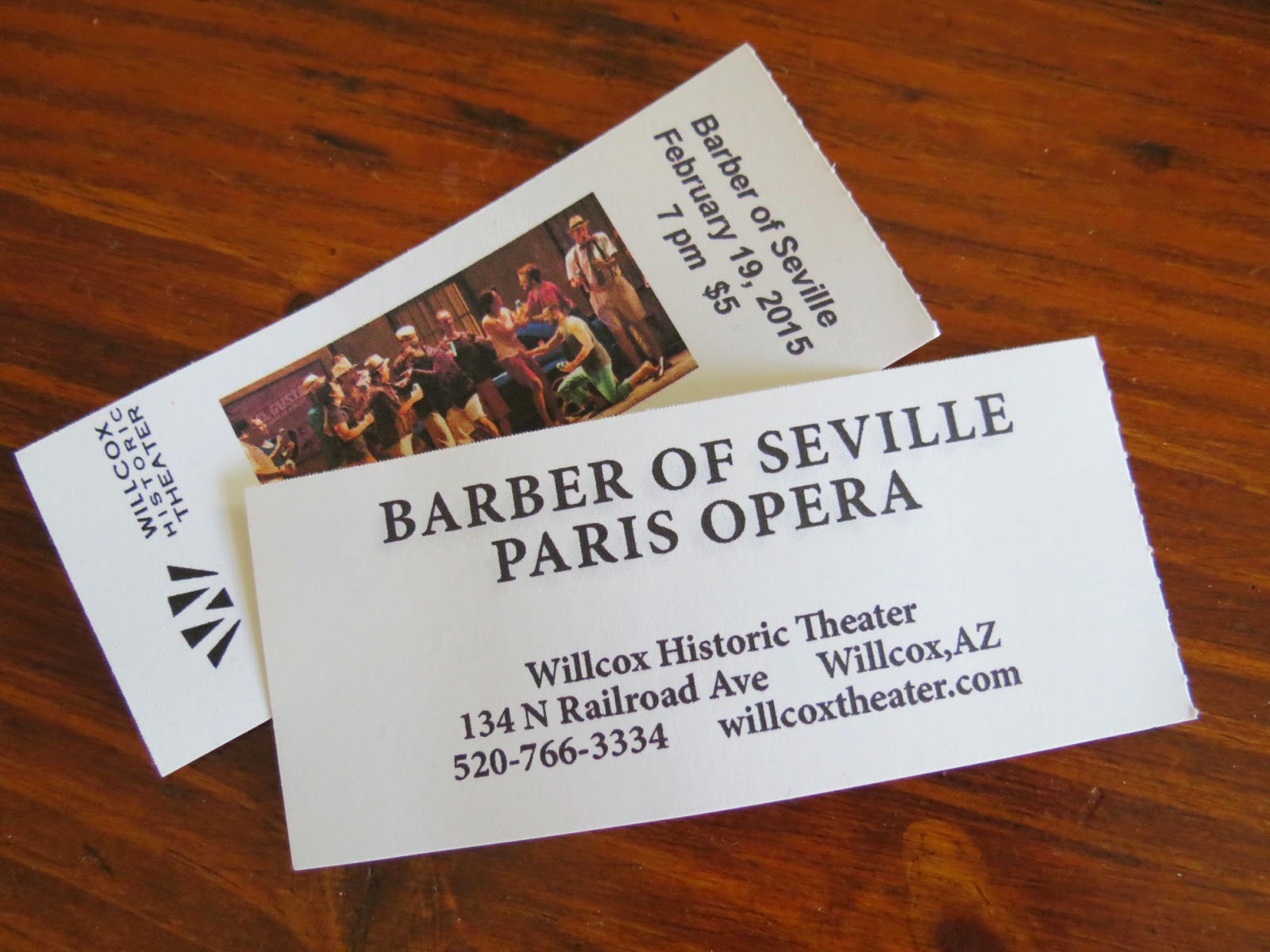 Wow! What a day! To think you can go from cattle auction to opera in the span of hours! Wonderful!

Your excitement is palpable! I would not have expected a livestock auction and an opera to share a twin bill for Wilcox, AZ!

Wonderful in every way.

And so, you were all surprised, yes? Good!!!

Glad you didn't get so enthusiastic as to get caught up in the bidding. Sarah sharing the back seat with a pair of steers
boggles the imagination!

Yeah, we'd have had to buy a livestock trailer, too. Not that I'd mind!