Climbing Into the Sky 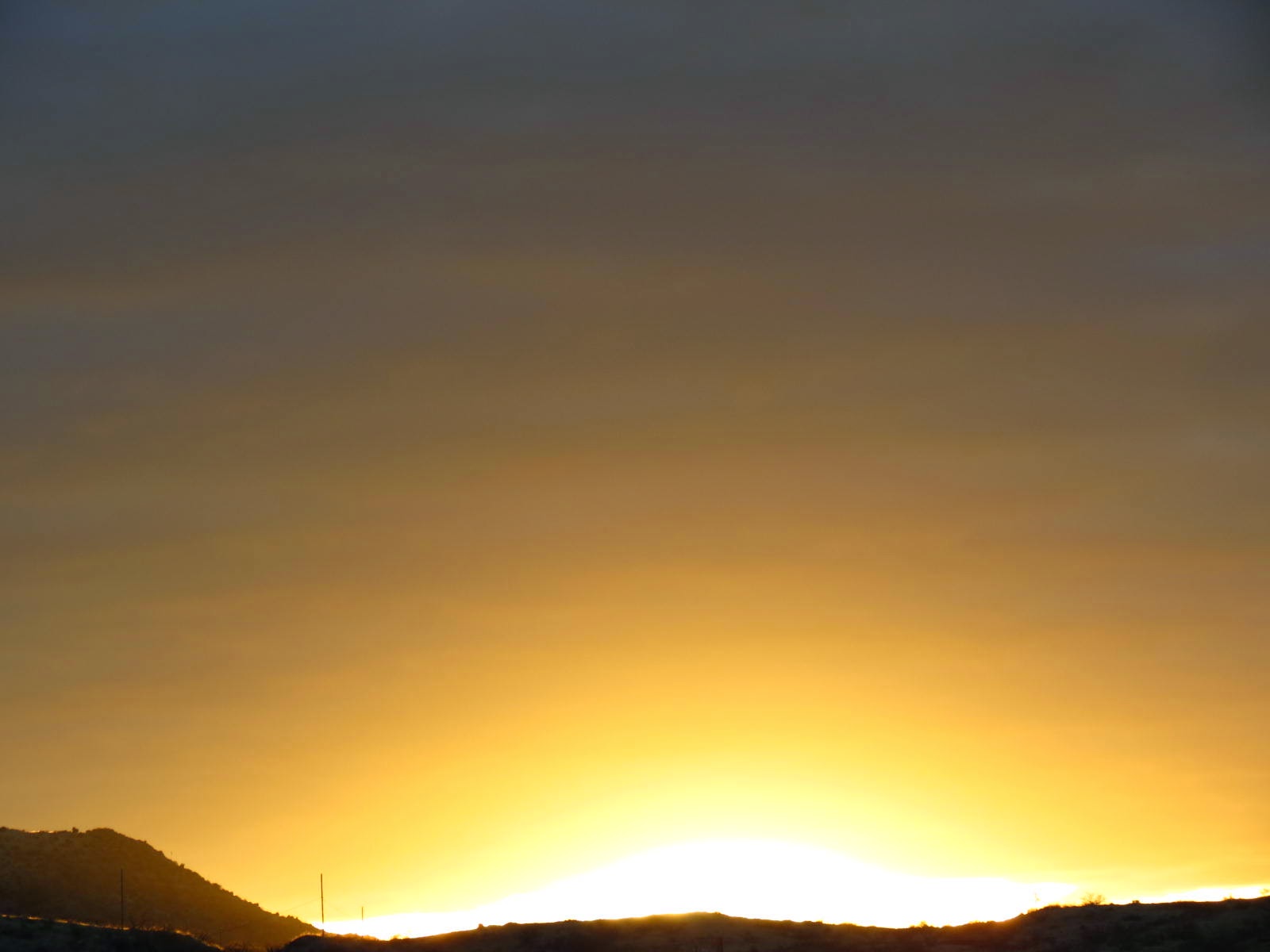 Within the fixed limits of its allotted hours the sun is supreme. It does not yield to passing clouds, for much of the time there are none. Nothing can deny the sun’s omnipotence or detract from its authority. Step into its presence and you are flooded with light. All the world around you is immersed in its radiance.

In the morning, we went to town (Willcox, that is) to do errands, winding up with coffee on the front porch of our regular coffee spot before coming home for lunch, so it was nearly midafternoon before we set off on our first visit to nearby Chiricahua National Monument. Only 21 miles from Dos Cabezas, the trip took us east of home on 186 for the first time. 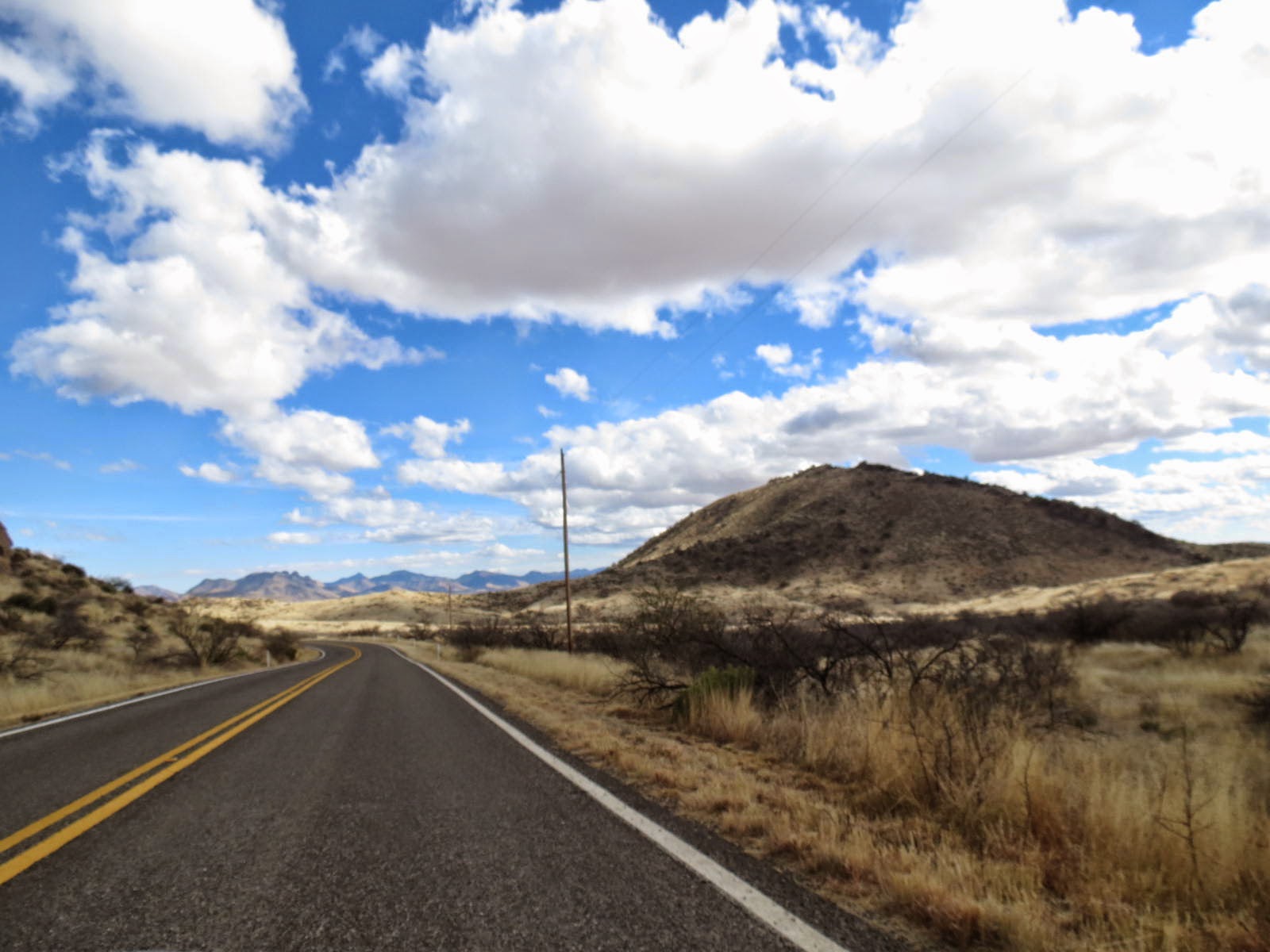 It was exciting to see snow-capped mountains ahead in the distance and to know that was our destination for the day. Clouds – yes, that day there were clouds -- made constantly shifting dark shadows on the mountains and intervening seas of grass, the grass tall and golden under a bright blue sky like the coat of an immense animal covering many square miles. 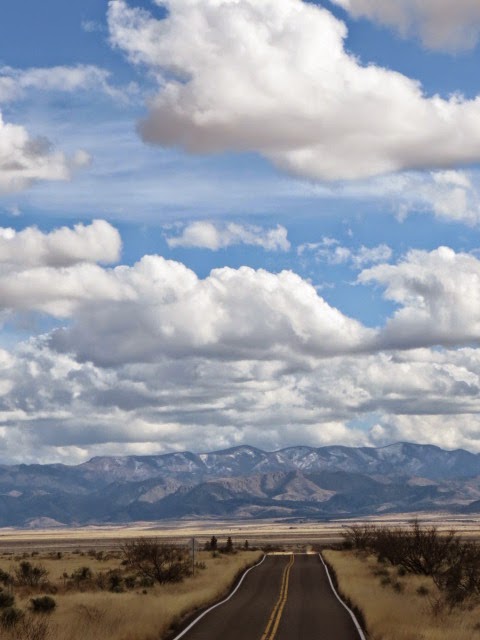 We hadn’t gone far into the park when a roadrunner suddenly appeared and ran crazily along the road, zig-zagging in our direction, before disappearing again into the vegetation. At the visitor center, I mentioned it to the ranger, prefacing my reportage, “This probably won’t sound thrilling to you...,” but she said it was thrilling, because “we don’t get a lot of roadrunners up here.” More luck! And it kept coming, too, because Chiricahua no longer charges an entry fee. I put the money saved toward part of the price of a state road atlas from the gift shop. I like maps with detail, with every dirt road shown.

But this day was all Chiricahua. And here, in large part, is the text from the first informational sign we encountered:

The Apache called this area “The Land of Standing-Up Rocks”....

Chiricahua resembles an oceanic archipelago – a sea dotted with islands – only here the desert is a hot desert grassland. We call these isolated mountain ranges “sky islands.” The Sonoran and Chihuahuan deserts, and the Rocky Mountain and Sierra Madre ranges all meet here. The convergence of these four homes makes the area unusually rich in biodiversity.

Chiricahua National Monument was established in 1924 to protect the fantastic rock formations known as “the pinnacles.” In 1934 the Civilian Conservation orps began the job of improving the road and constructing the trails and many park structures, including the visitor center.

In 1976 Congress decided to further preserve the land by designating 86% of the monument as Wilderness. This precludes any development and human intervention, thus ensuring the preservation of the geological formations for future generations.

Another 6 miles along the Bonita Canyon Drive will transport you through oak, cypress and pine forests to the summit at Massai Point, where you will get a true sense of being atop a sky island.

And so we set off, up the mountain road. It was not at all easy to photograph the “standing-up rocks,” either with the light directly on them, so that they tended to be overexposed relative to surrounding sky and trees, or when they were plunged into deep shade and the sky behind them flooded with light. I thought Photoshop would save me, but success was elusive – limited, at best. 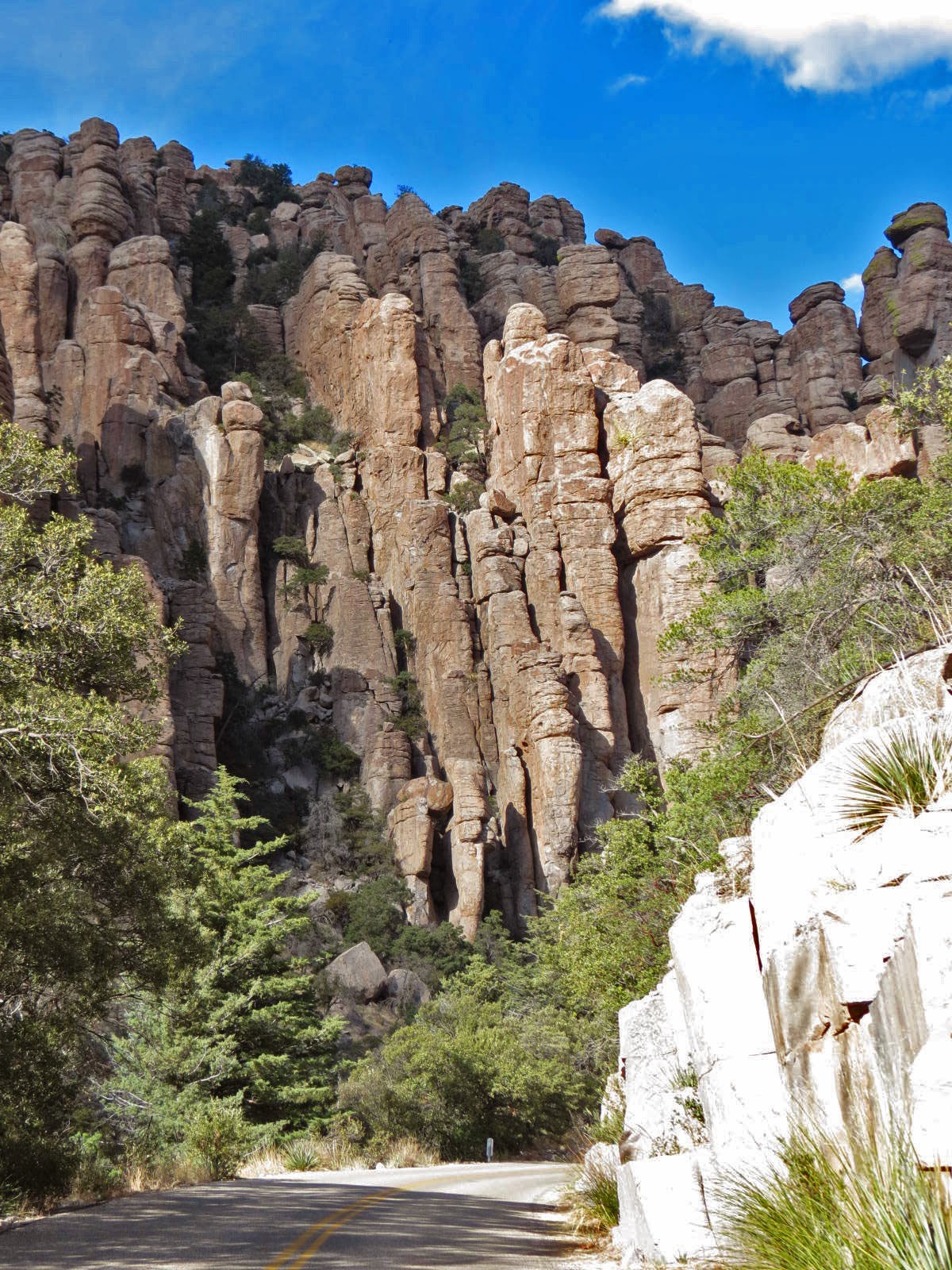 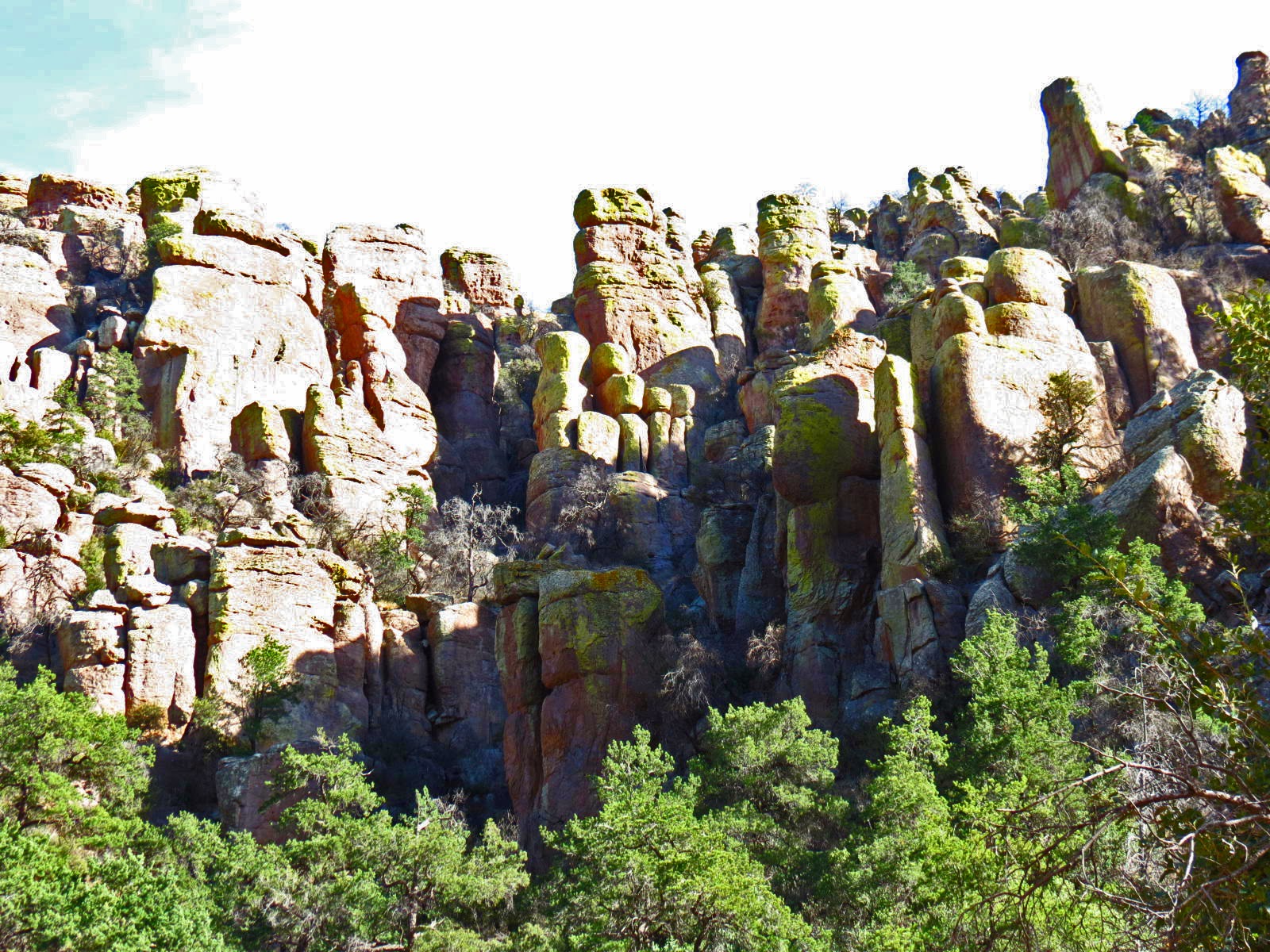 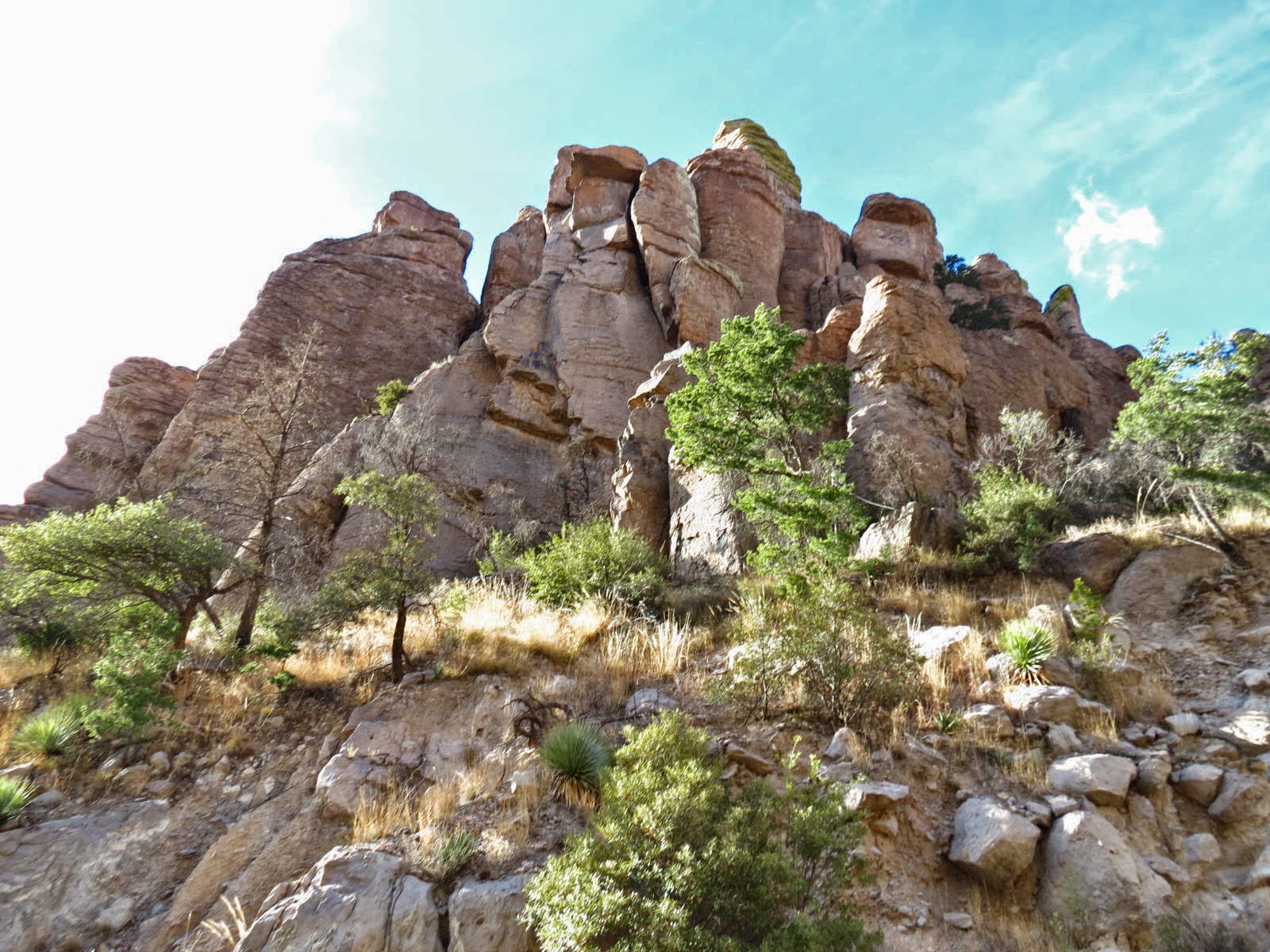 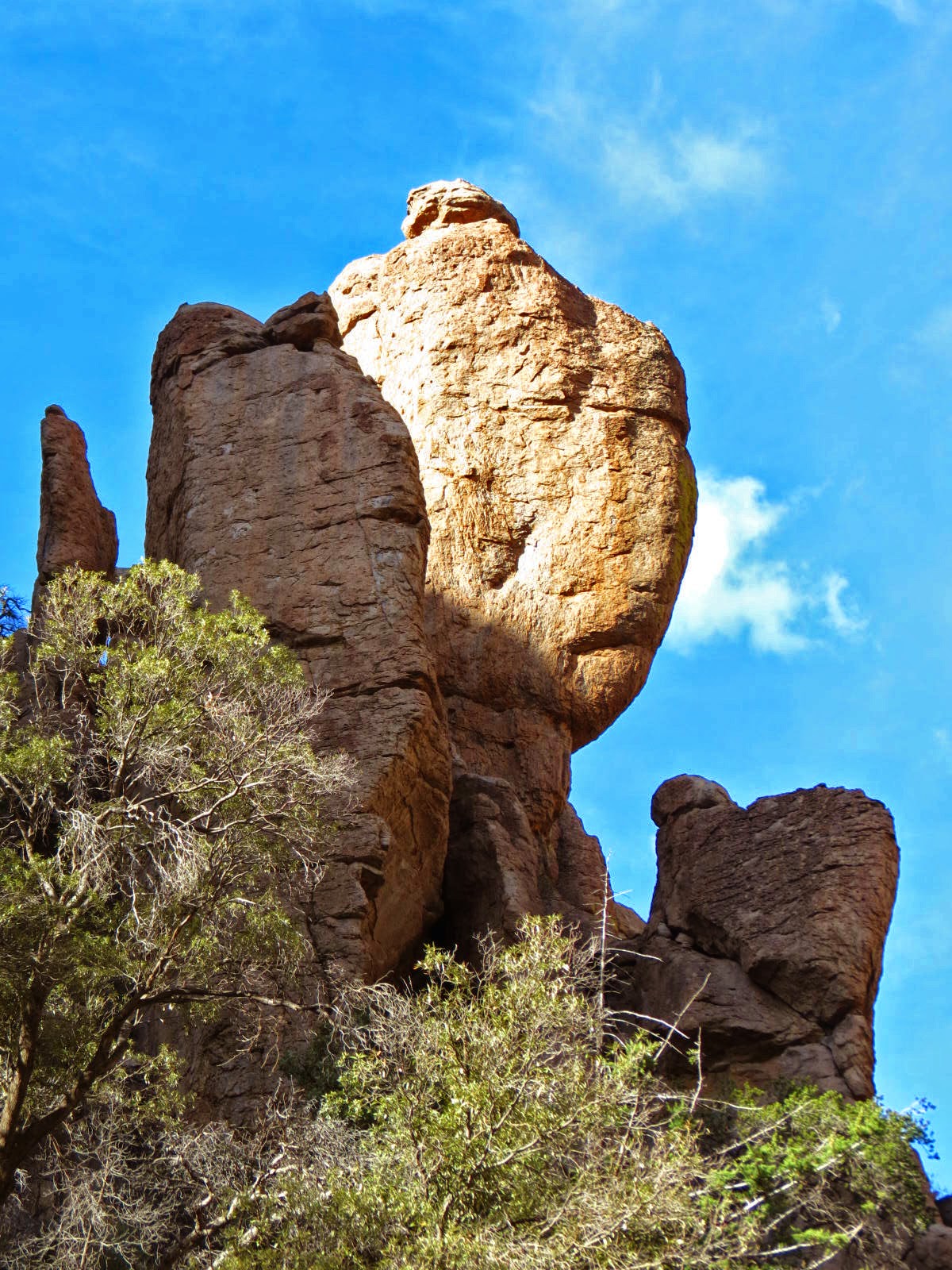 Also, as the road climbed more and more steeply, my anxiety got in the way of camera work, too. I kept asking David to slow down. He wasn’t driving fast, and he was driving very well; it just felt fast and scary to me. Lucky (again) that I hadn’t known ahead of time how terrifying the road up to Massai Point would be, with all those drop-off edges, or we might have missed some these heart-stopping long-distance views. 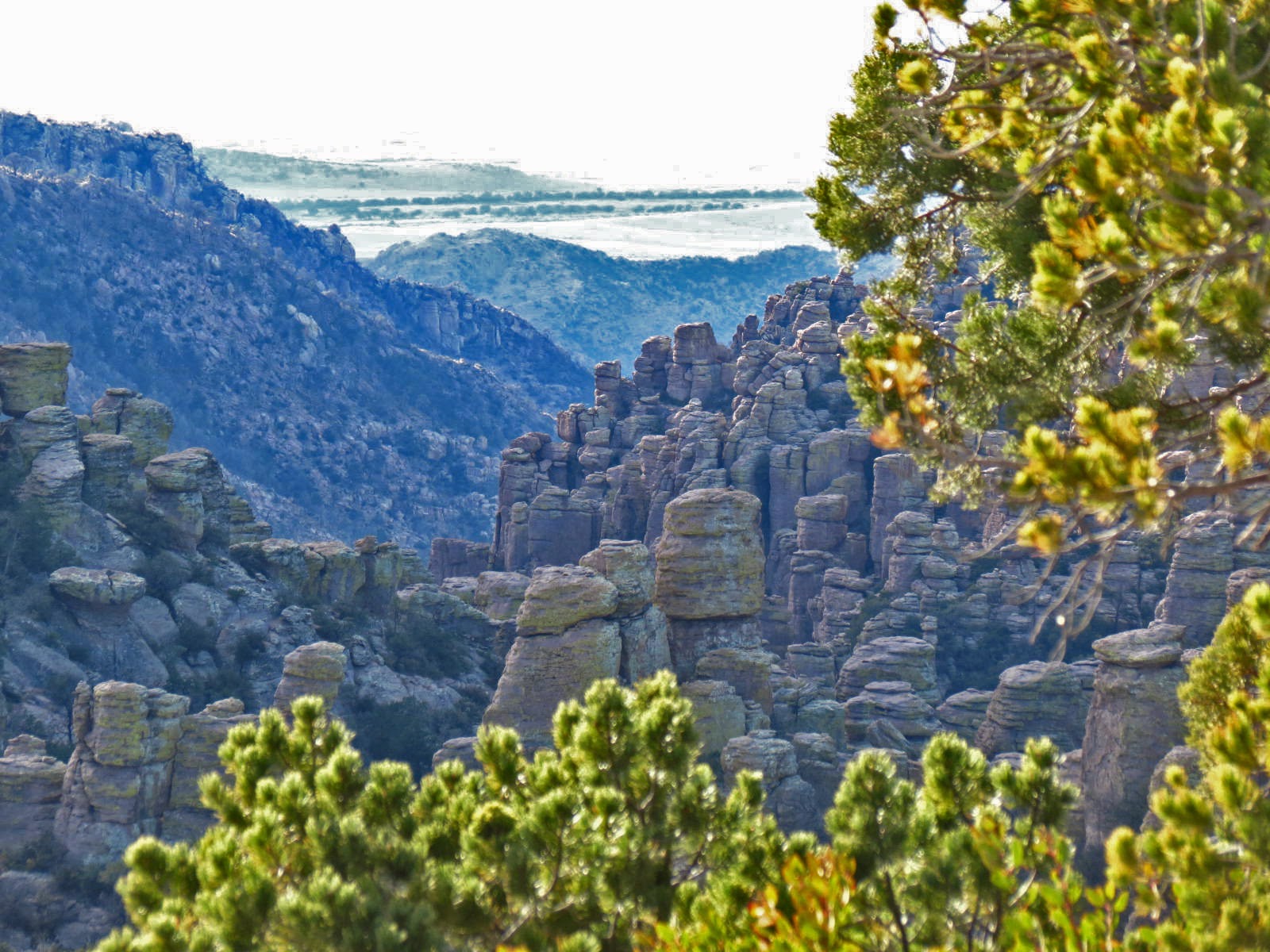 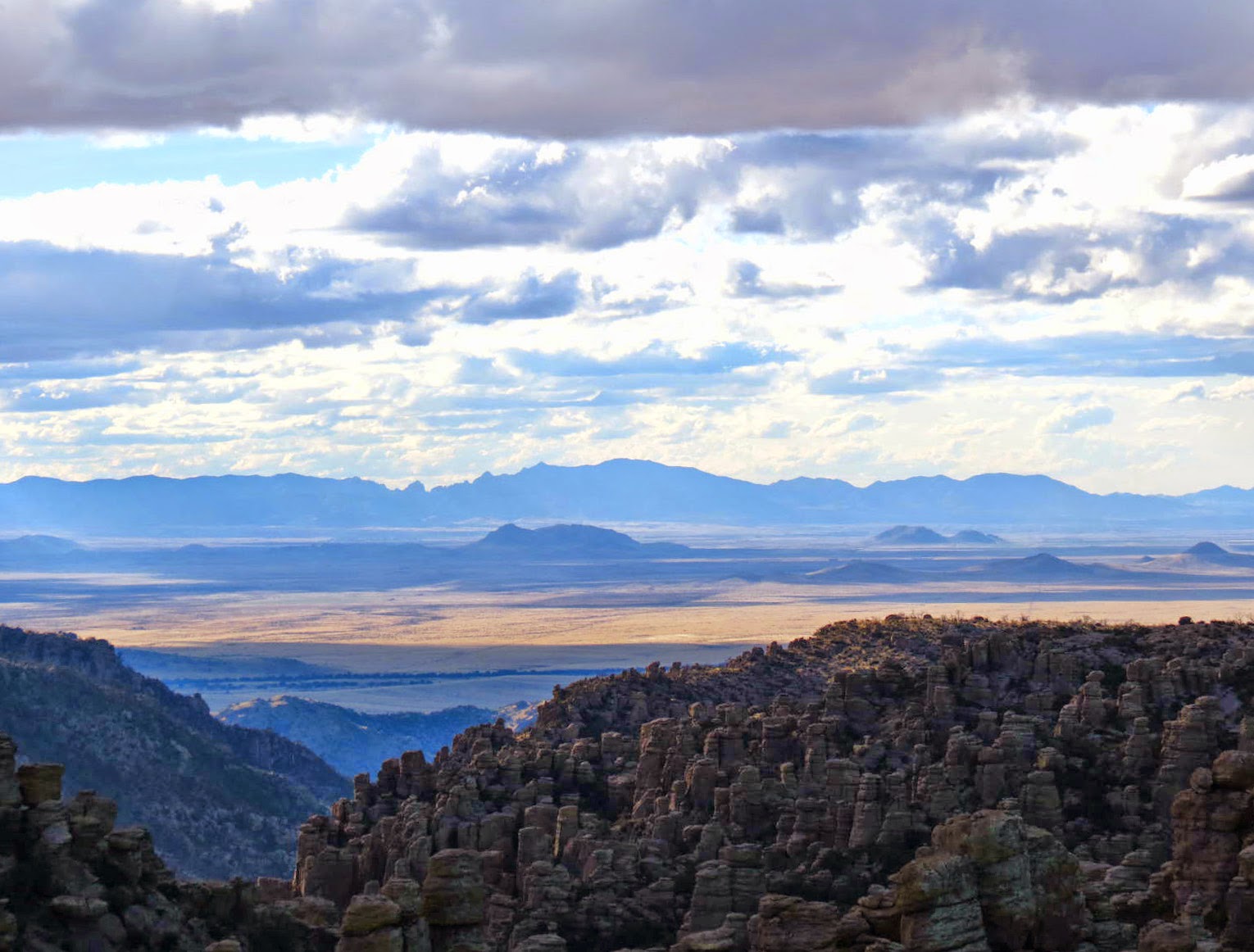 Again, sharp contrasts of light and dark made it impossible (for me, I should say; suggestions are welcome) to capture both nearby mountain rocks and lowlying background rangeland together. Try imaginatively to put together in your mind’s eye the two photographs above to see what we actually saw. 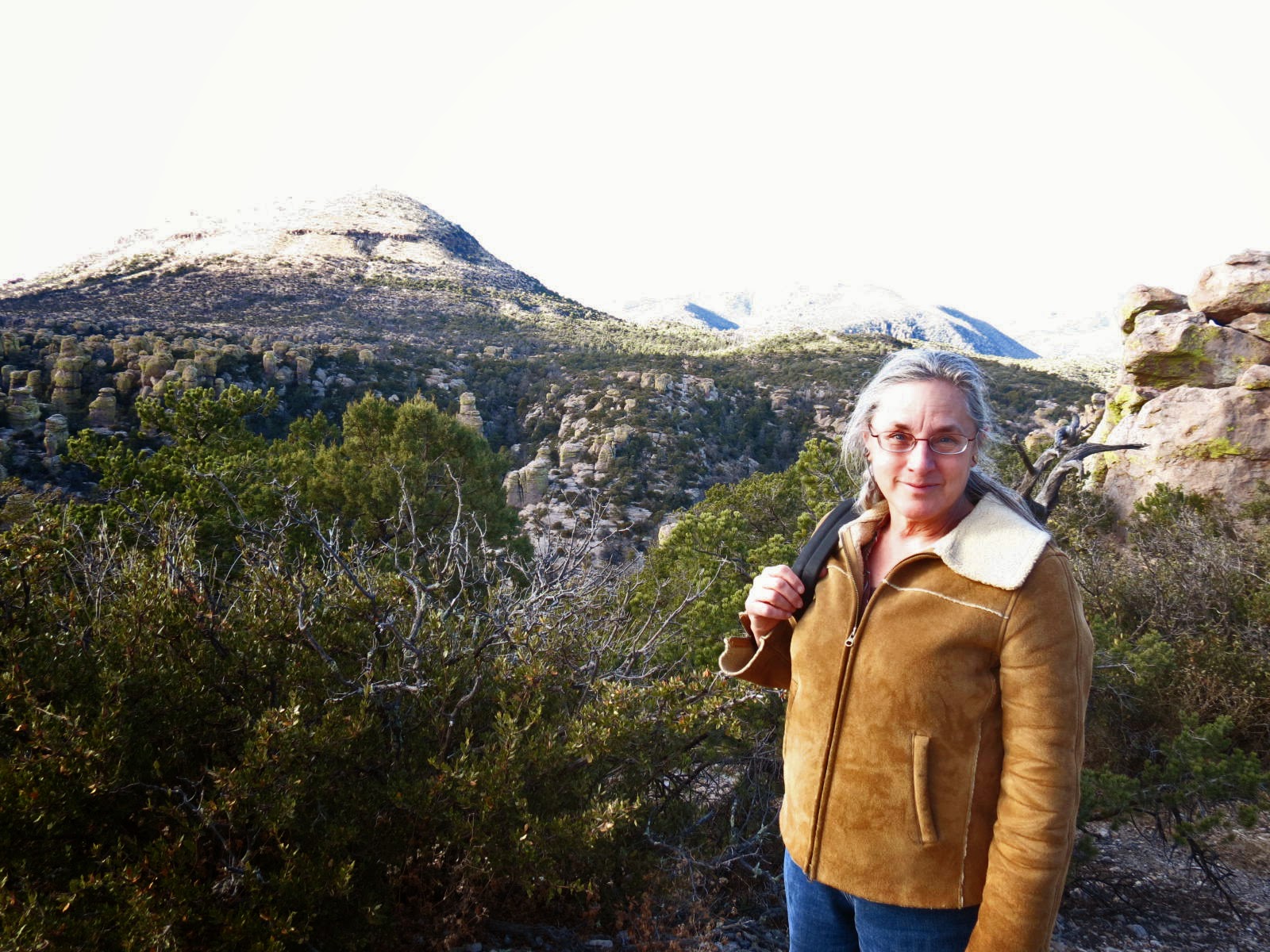 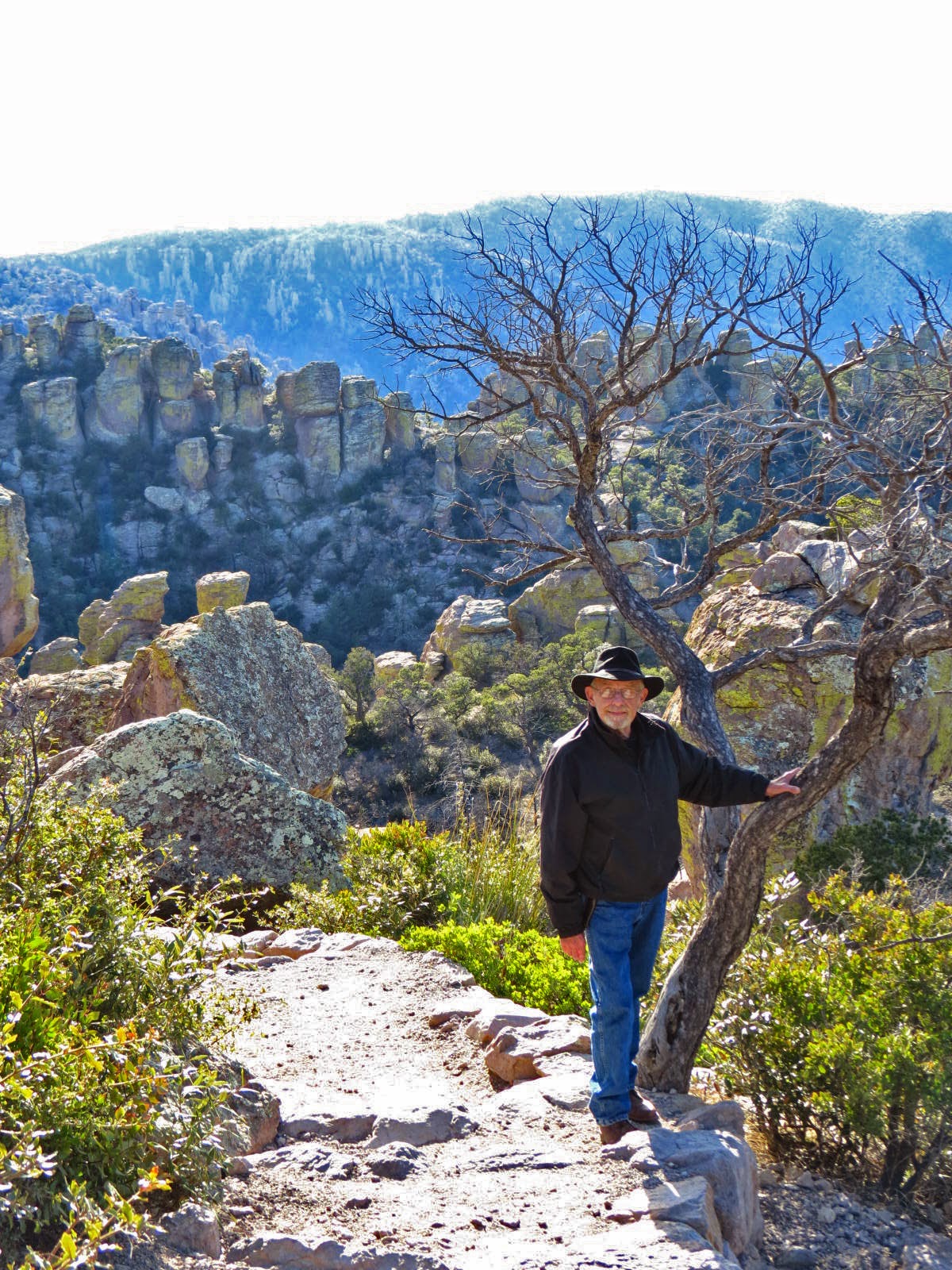 Can you tell I was quaking in my boots? And doesn’t David look relaxed? 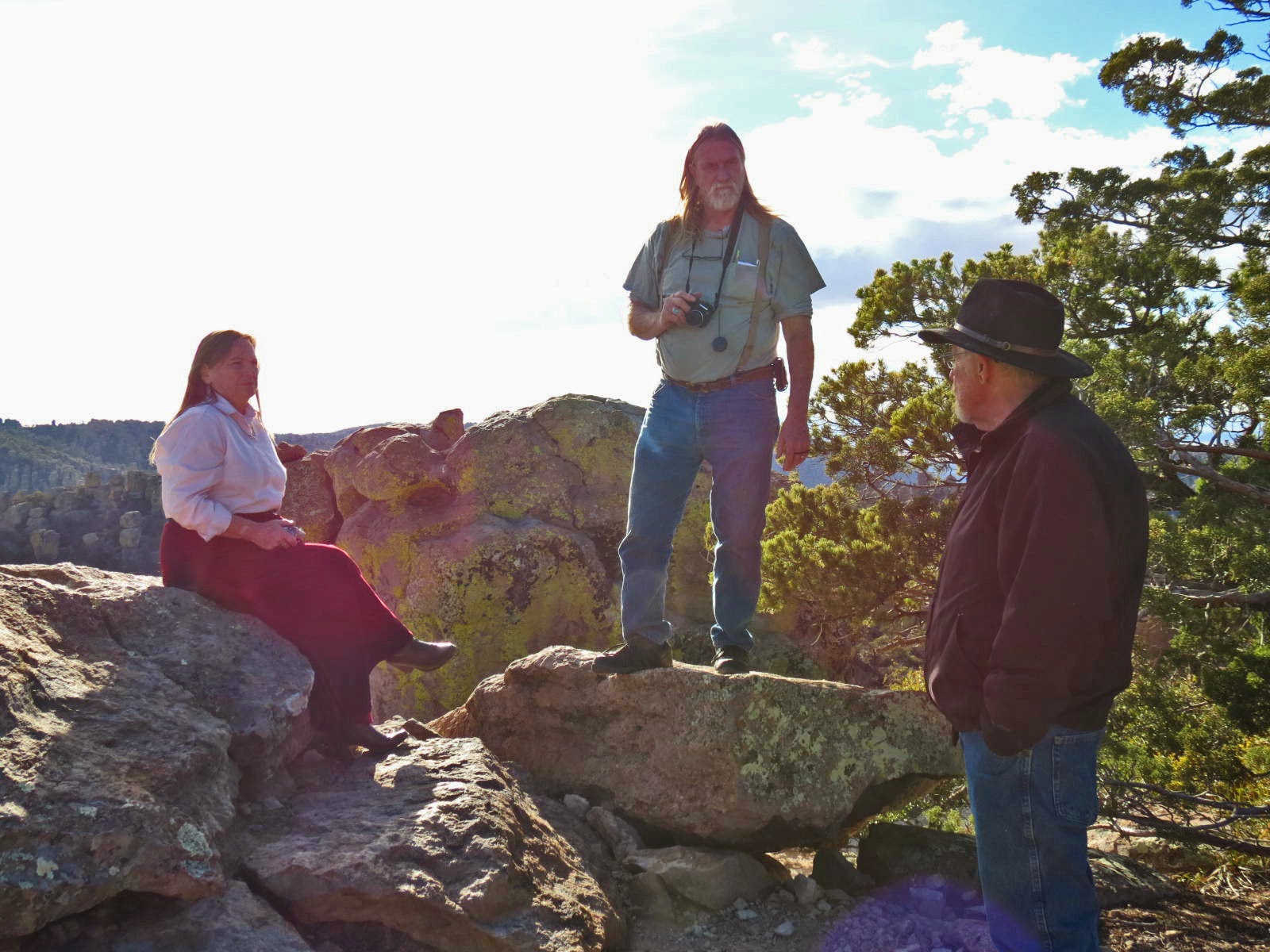 We met a couple from Louisiana, painters who now live in Benson, Arizona, not far from Willcox. David talked painting with them. Sharon and I compared geographical notes. Looking off in the direction I correctly identified as northeast, she told me we were looking toward the Gila range and New Mexico. The light in that direction was kind and gentle. 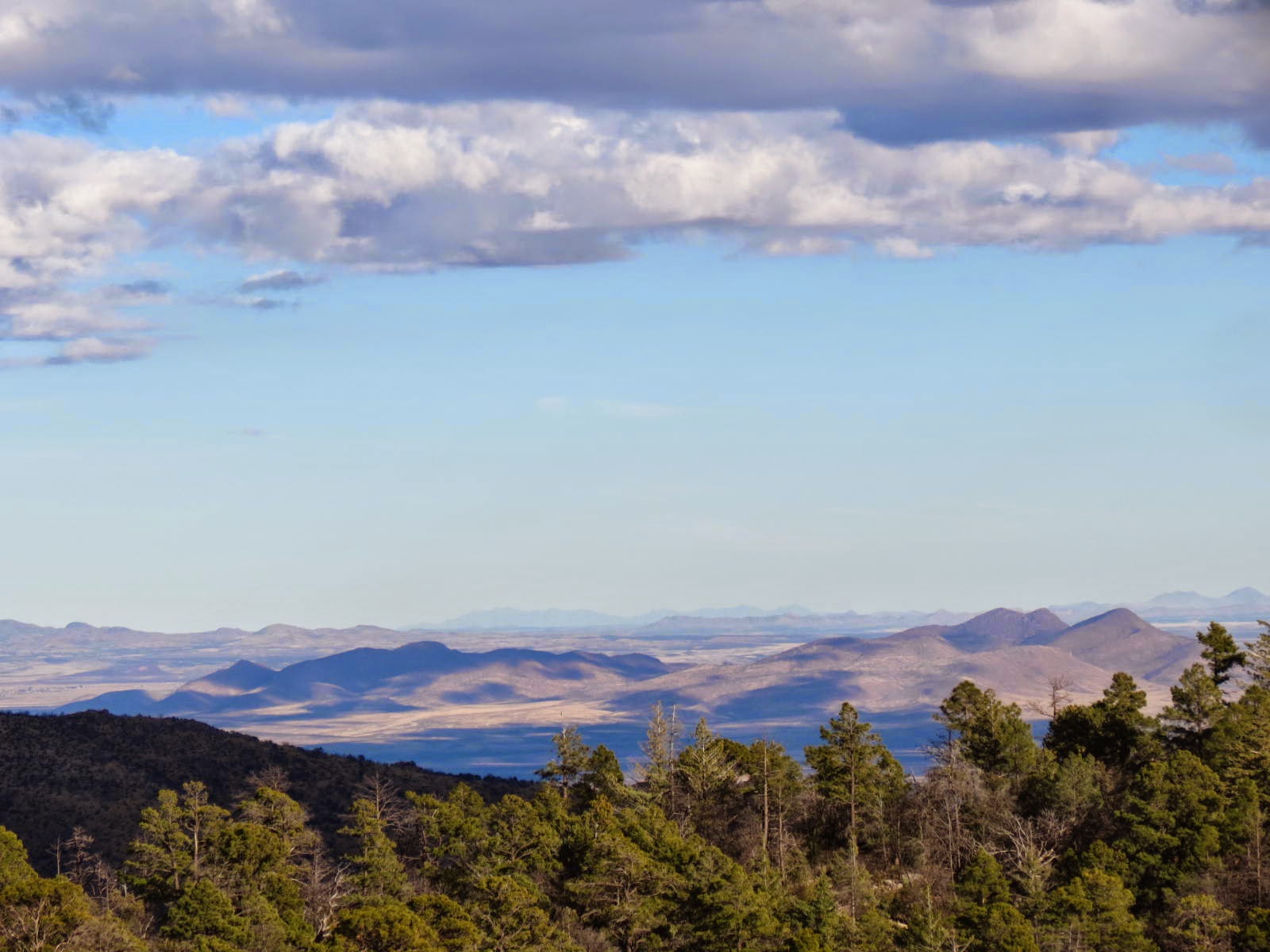 The name for the geology of this SE corner of Arizona is range and basin (yes, as in John McPhee’s book title), and I admit I’m more comfortable in the basins or in the foothill regions between basin and peaks. Coming back down from the dizzying heights, when I was able to look up at the rocks again and feel more comfortable, we found a picnic spot and caught our breath and ate apples and drank water and spotted an acorn woodpecker high in a tree. The acorn woodpecker is “common,” but it’s the first one I’ve ever seen, so it was thrilling to me, and I’m including its picture, despite the poor quality of the image. 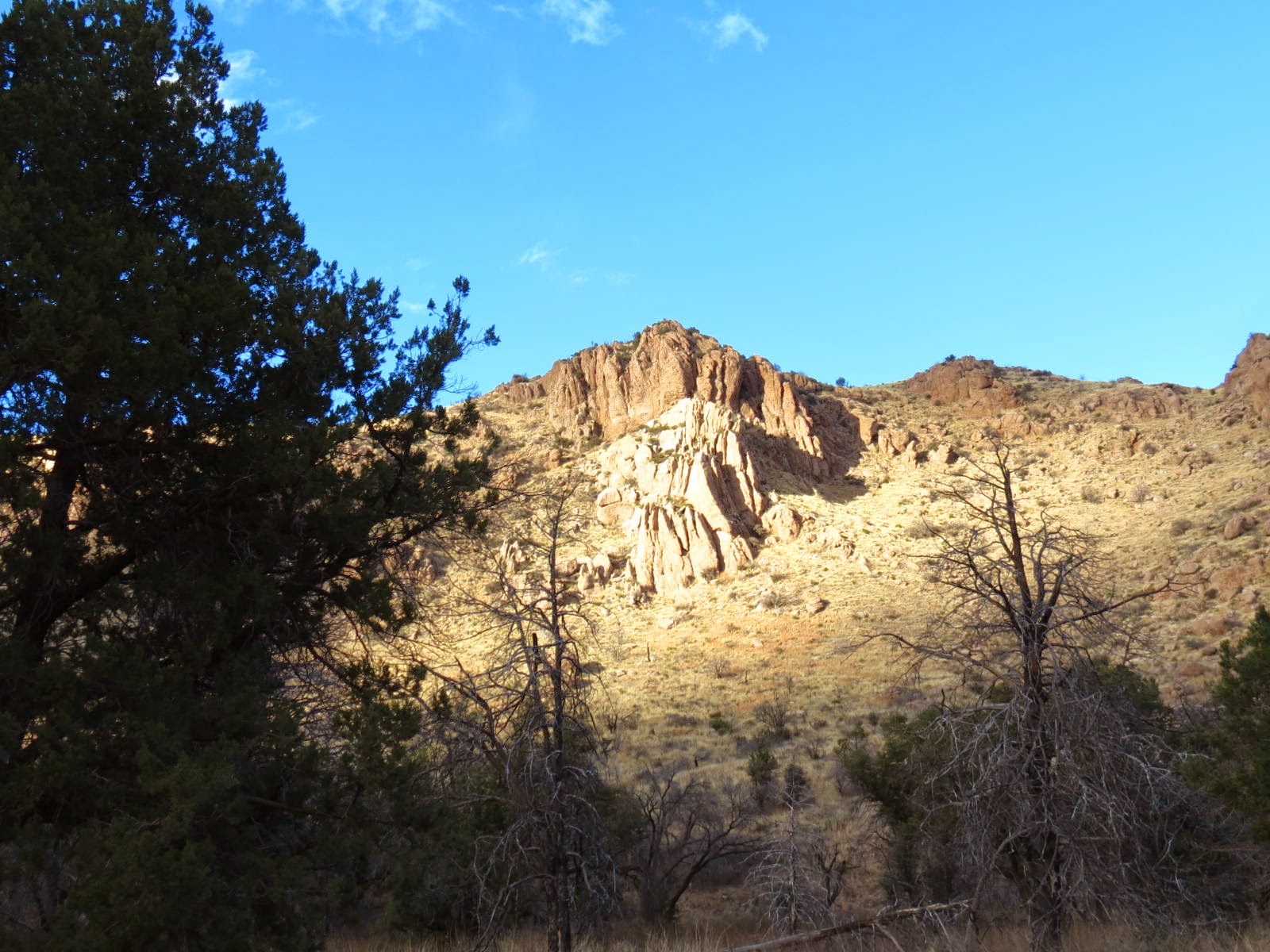 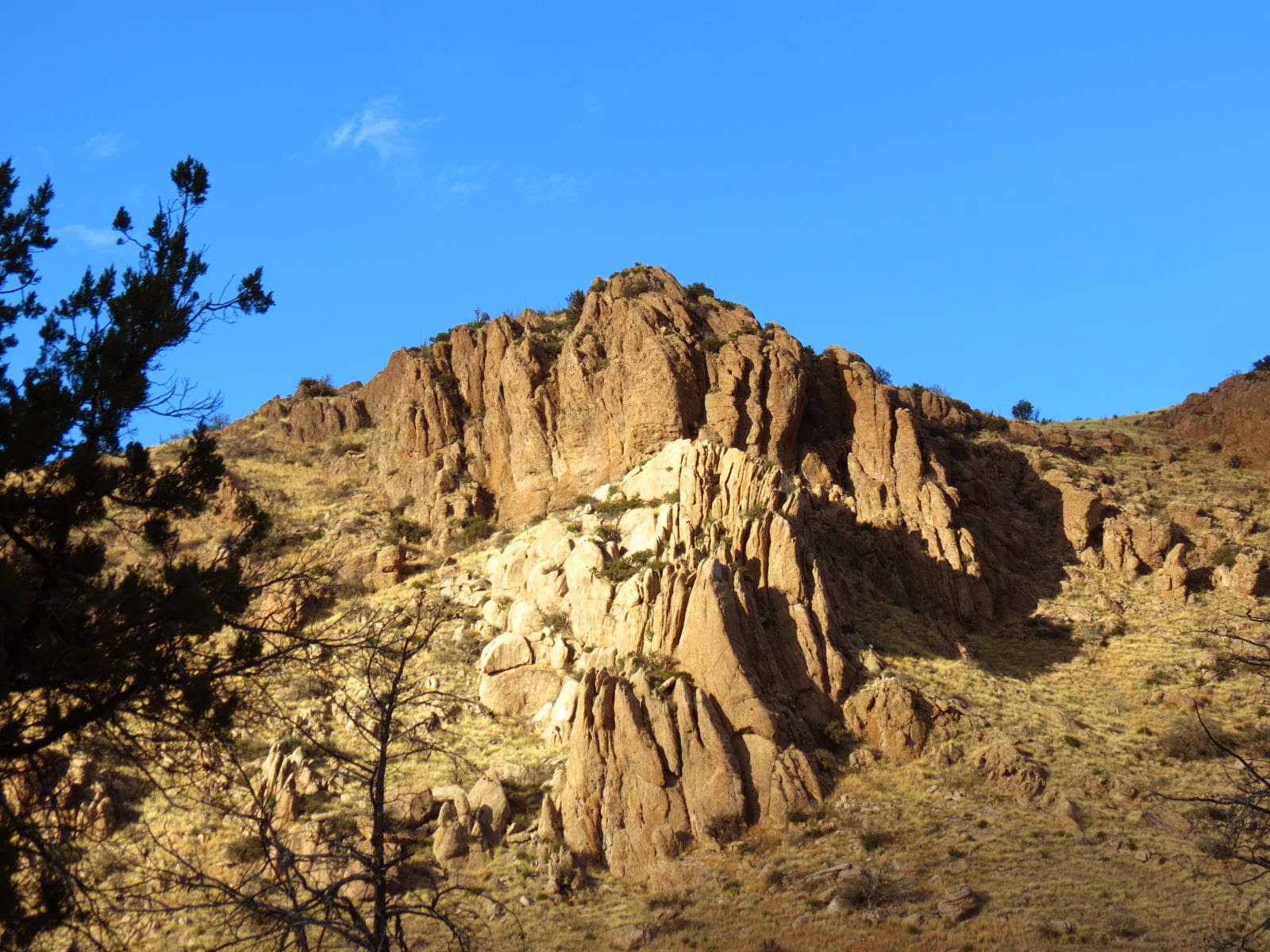 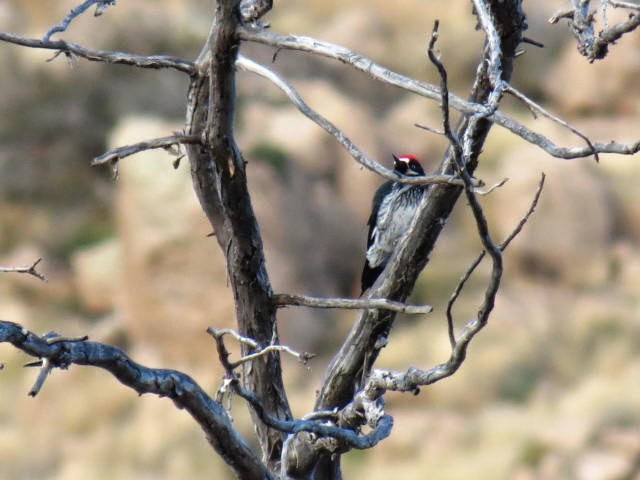 The light was gentle as we left the mountains behind. We will return often to the Chiricahuas, I’m sure. It is very close and very beautiful. Also, there is a lot to explore at my preferred lower altitudes. 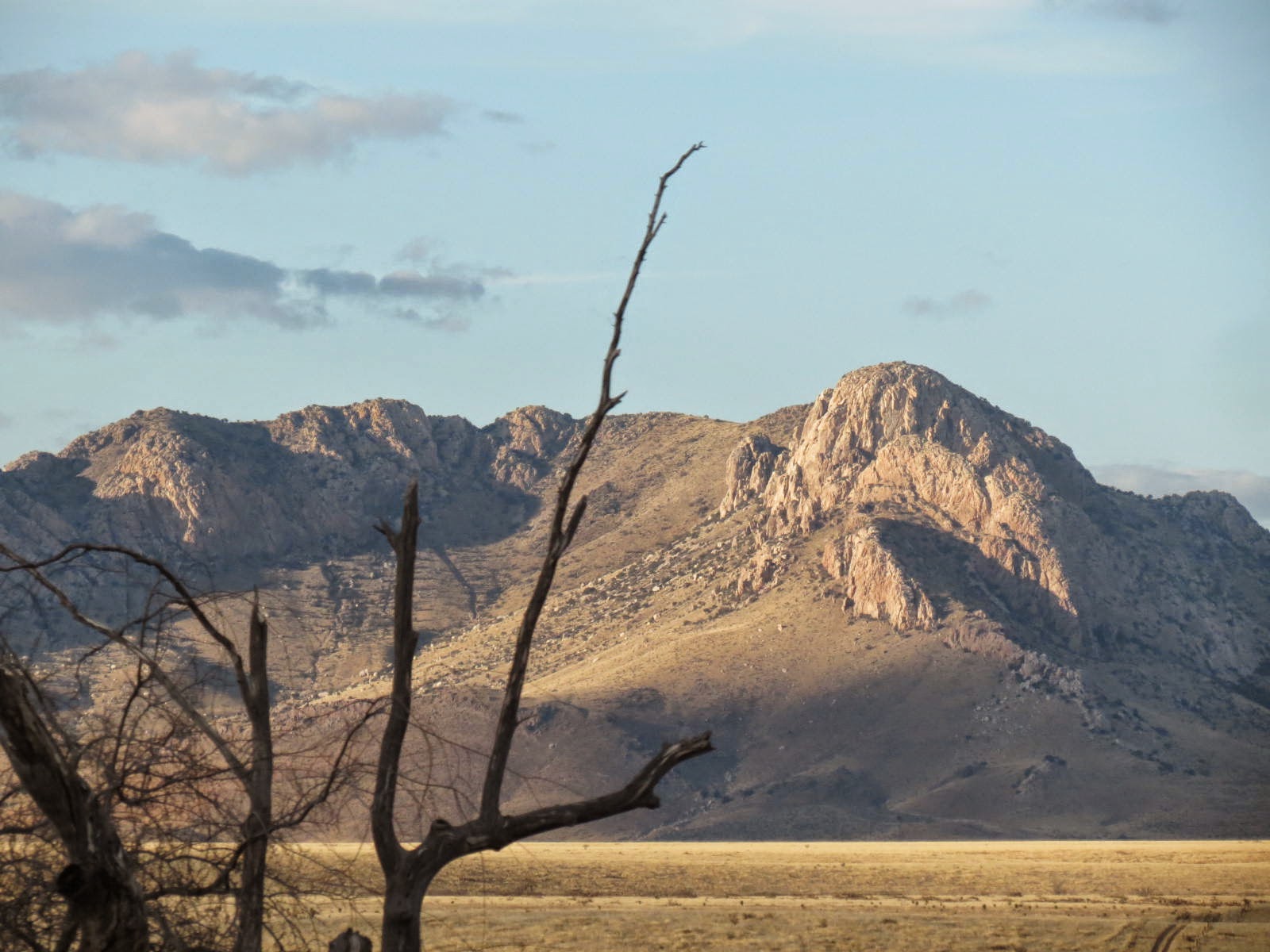 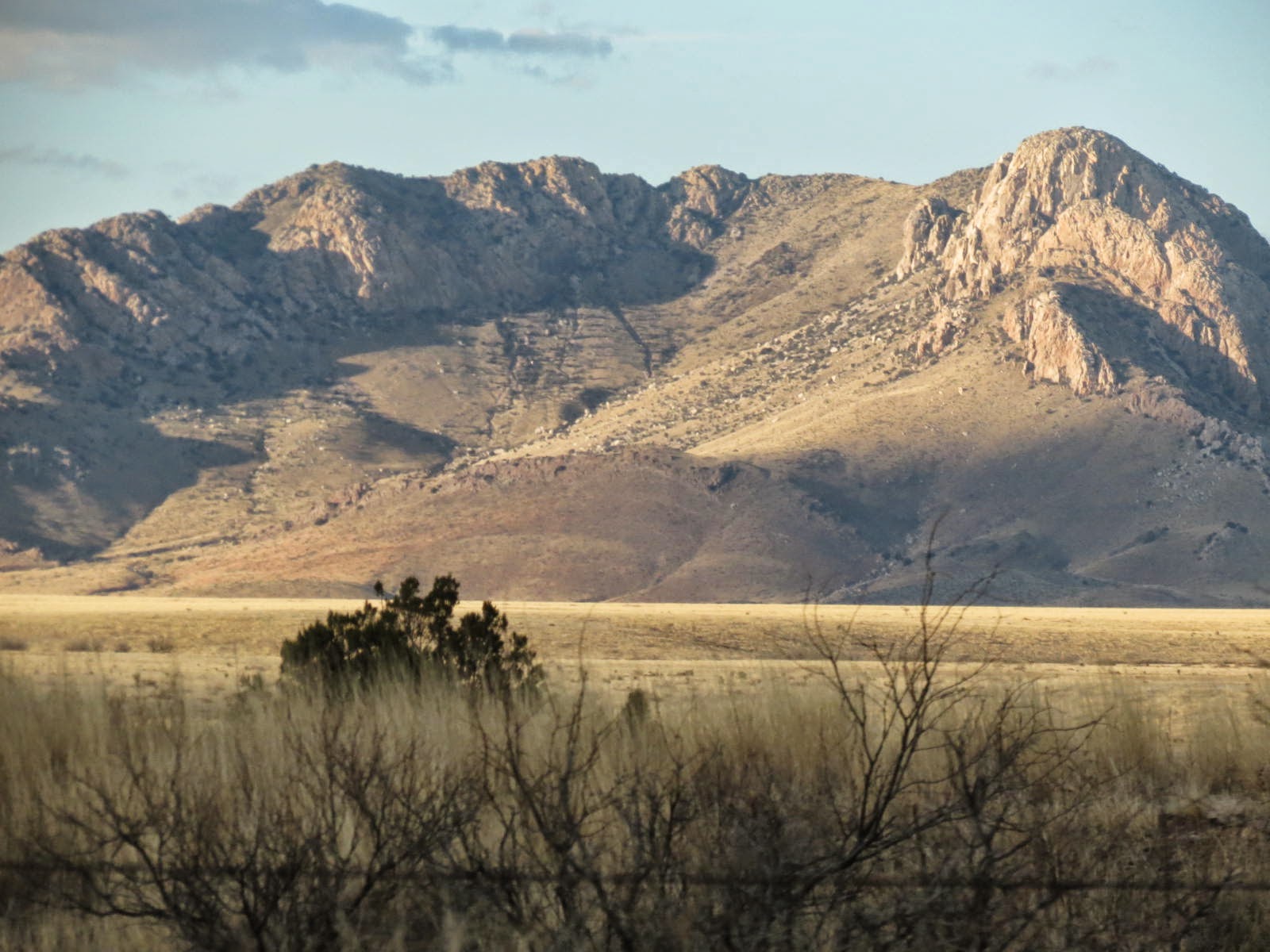 On our way back west, I wanted to stop to get a better look at some grazing “cows,” as all cattle (mostly steers) are called out here. When I got out of the car, the animals ambled over to the fence, seemingly curious. 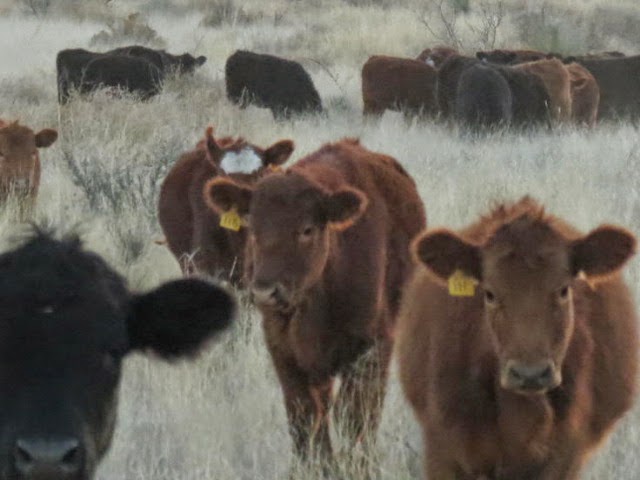 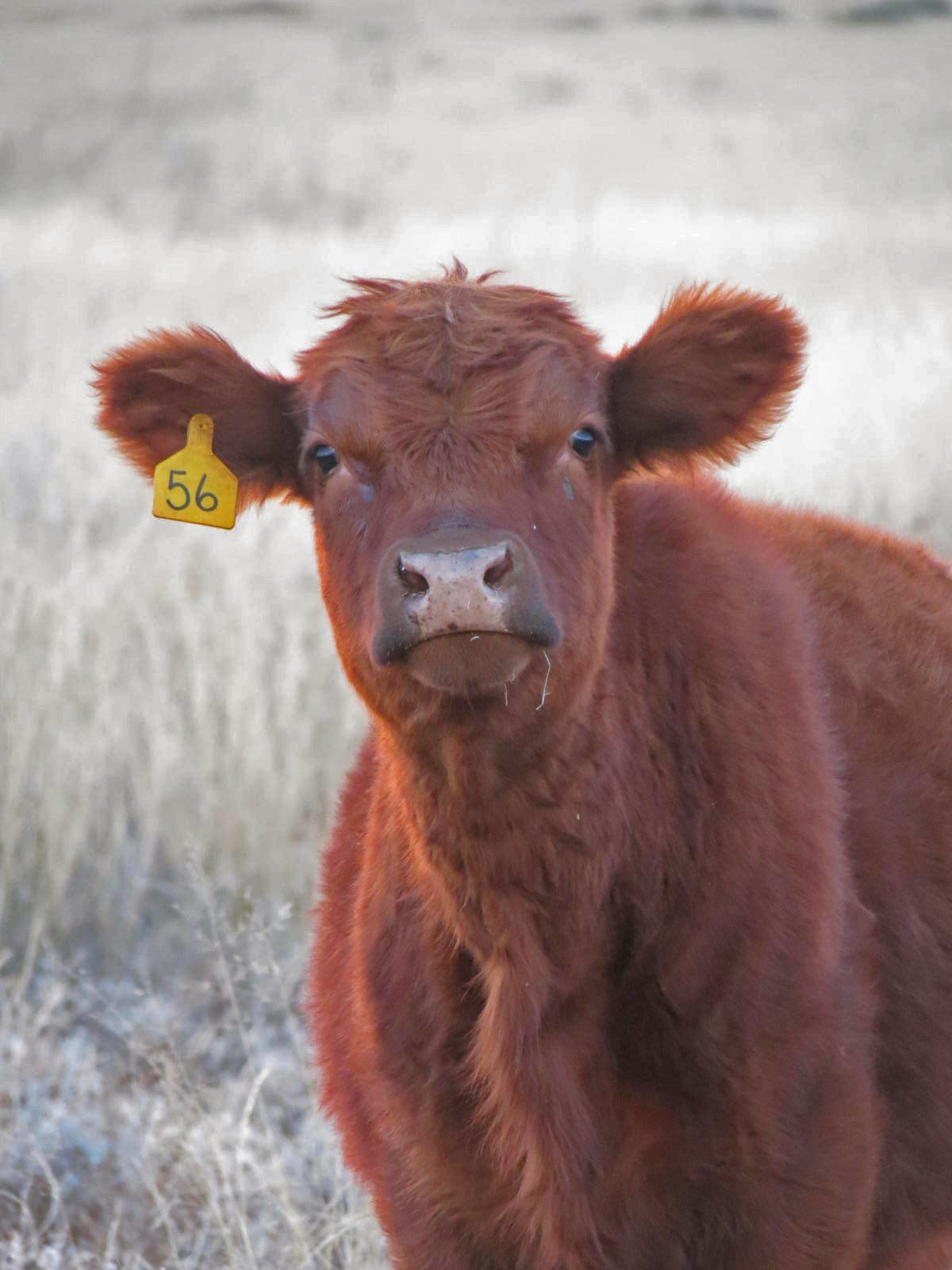 Blue sky with clouds, golden grasses, a lovely new stretch of road with almost no traffic, a roadrunner, fantastic mountains, terror, delight, beauty, an acorn woodpecker, and cattle up close -- what more could such a beautiful, thrilling day offer, if not a spectacular sunset from our front door in Dos Cabezas? 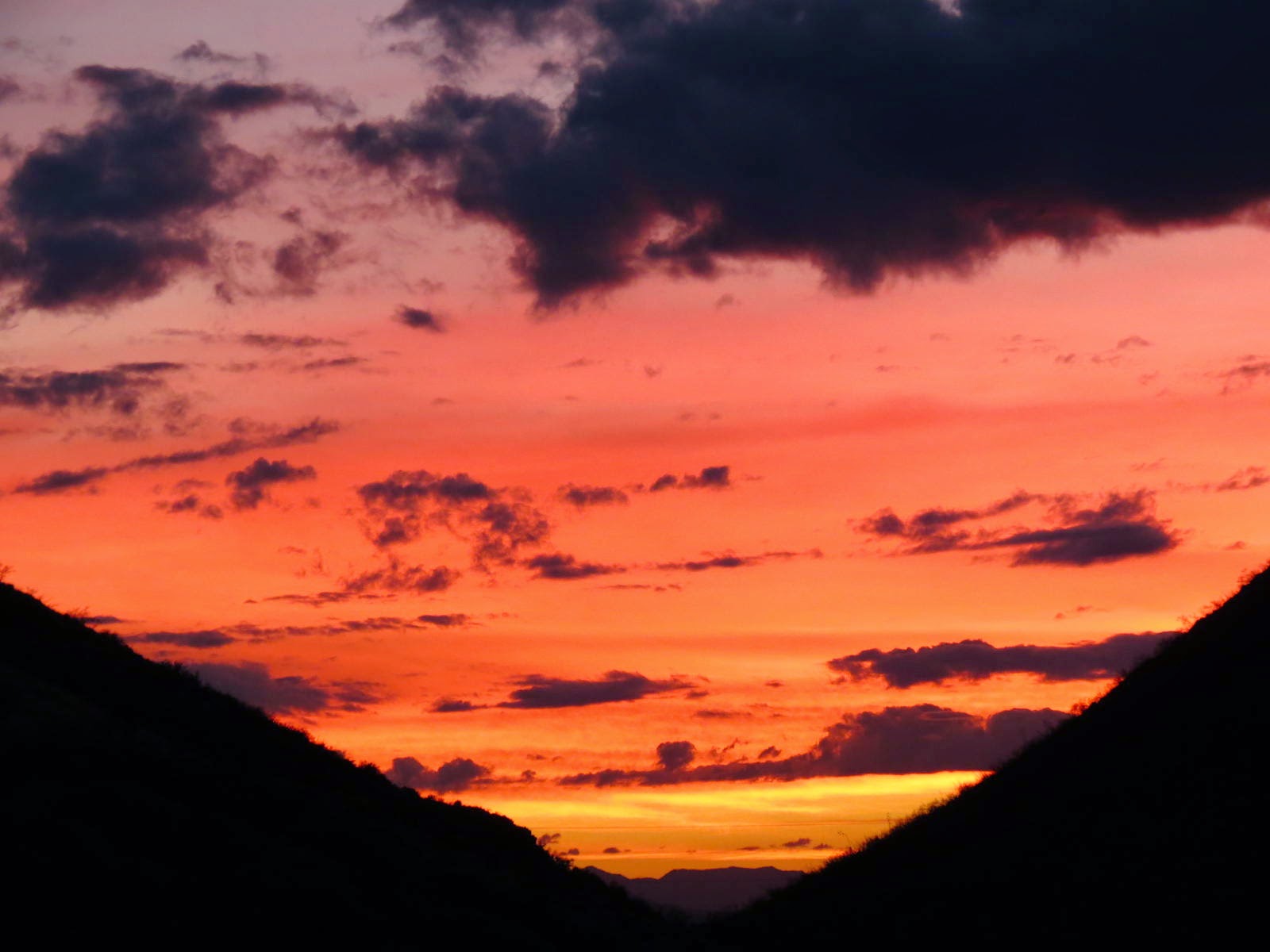 Pamela...What a wonderful series of images! I especially love the early road shots. And #56 cow is so precious. As for high contrast photography, it's the most difficult kind of photography and a good reminder that our eyes are able to process vast contrasts more easily than the camera's "eye." Your camera probably has a HDR setting, which stands for high dynamic range, which is the issue you're dealing with. How the setting works is the camera will capture three (or five, depending on the camera) images with a range of contrasts. It will do this automatically. When you're in HDR mode, the exposure is actually quite long because you're capturing three images. Because it emulates long exposures in low light, it may be difficult to do this without a tripod. Once you've captured the HDR images, your editing program will merge them into one photo, as long as your program has that capability. Karen
p.s. I REALLY empathize with the terror you were feeling in the drive through the mountains.

Well, Karen, I left that big manual for the camera at home (bad choice) but will explore different settings with your tips in mind. I am extremely lazy when it comes to so much as thinking about a tripod. Indoors, fine. Outdoors? I can't hold still that long!

Not to worry. Canon posts all their manuals on their websites so you don't have to carry all the clunk with you. I've downloaded mine to all my computers and devices. I can't remember if you have the Powershot SX40 or Powershot SX50, but here are the links to them both:
http://gdlp01.c-wss.com/gds/0/0300005730/01/pssx40hs-cug-c-en-web.pdf

Love these. All that big magnificent poofy cloudy sky!

Pamela - beautiful!! And Karen I did mean beautiful cow 56.