In the Midst of the Flow 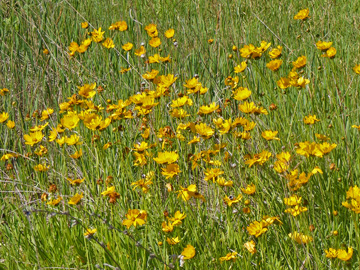 Sunday was a beautiful day. Coreopsis are blooming now as we near the summer solstice, crowds of brilliant, Porsche yellow flowers along the roadsides. Driving to Kehl Lake in the morning, David and I stopped to watch a hawk “making lazy circles in the sky.” Out on the lake was a loon, alerting us to its presence with a distinctive cry. 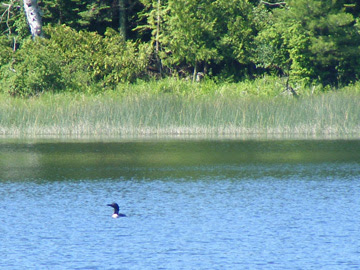 The bookstore day was pleasant, and Sarah even had two doggie visitors, Laddie (Sheltie) and Bodrie (Golden). A young woman who saw Cry the Beloved Country on my “Some of My Favorites” shelf opened it to read me her favorite passage. After closing, David and I drove to Suttons Bay for pizza and came home by the back roads, where there is a new horse in residence in a corral that has been too long without a horse. That makes me very happy indeed! 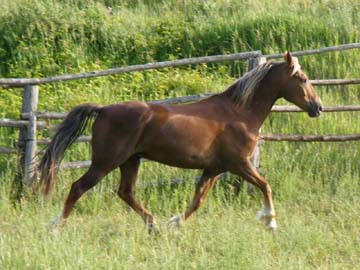 Monday morning rain makes me happy, too. The gentle rain s welcome to all that grows.

And now my attention turns to my first summer author, Fleda Brown, who will be at Dog Ears Books this coming Friday afternoon at 2 o’clock to read from her beautiful book of memoir essays, but I’m going to be lazy and re-run an earlier post on that book. Following is what I wrote back in 2010 when her book, Driving with Dvorak: Essays on Memory and Identity, first came out:

Sorrow remains within me like a closed box, the contents of which I know so well there’s no need to keep checking. Still, sometimes one wants—one deliberately opens the past and lifts out, one by one, its small, radiant objects. One suddenly thinks of sorrow with fondness, the way it keeps on being itself, no matter how it’s been anatomized, analyzed. Sorrow is easy to love, actually, the way it asserts its own clear presence that one can’t dispute, can’t wish away, for the way it insists on being included, along with everything else.

Delaware’s poet laureate from 2001 to 2007, memoir essayist Brown is a poet first and foremost, and that art shows in this book, its pieces personal, even intimate, but never sentimental. Always there is the sharp, true edge, discovered, rediscovered and valued for itself, given to us in words chosen carefully to capture and present it.

My longing joined up with a more universal longing that year: we girls turned equine, galloping across the ruts of the playground whinnying and neighing in our sleek bodies that were filling with a new, animal energy we could only call horse.

Then there is the way she writes of Dvorak’s music, weaving it into memories of summer vacations with her parents and siblings. Sound simple? Think again. Try it yourself, and then read the title essay in Brown’s book. I found myself holding my breath and then letting it out in a sudden gust, upon which I would have to close the book and put it down for a few minutes before taking it up to go on reading again.

I catch an updraft; it is good to have back the old dream of flying. I am molecular, carried on drifts like a Chagall figure, nobody’s pain hurting me, not even my own. The sequence happens over and over, as if I am trying out how to do it, or if I really want to leave so much behind.

My summer's reading has convinced me all over again that no one writes essays as well as poets. These essays are poetic elaborations of the writer’s life, as her poems are distilled moments of perception. There is no preferring one literary form over the other. –-Well, I am saying that, knowing that inevitably some readers will prefer the poems, others love more the essays. Being given both, however, we are privileged to choose from abundance or, greedily, as I prefer to do, take it all.

You present your life to yourself. You give it a happier ending, make a shapeliness of it. Then art sends you back to memory, where it came from. You can’t have the original, which maybe never was the right thing, but you can have this. And soft, the little wisps, rising from the lake: the angels, the annunciation. You have to bow your head, to receive it, all of it, down on you, its sheer trumpets, clarinets, the joy of its French horns.

All excerpts in this post are from Driving with Dvorak: Essays on Memory and Identity, by Fleda Brown (University of Nebraska Press, 2010, $24.95, available at Dog Ears Books and other fine bookstores and more than worth the cover price.

Note: When Fleda comes to Northport on Friday, we will have other books of hers available, also.
Posted by P. J. Grath at 3:57 PM

The horse is beautiful and so is "neighing in our sleek bodies that were filling with a new, animal energy we could only call horse." It's good to be back.

Echo is a beautiful Morgan. Fleda's writing--well, you know I would strongly identify with that particular girlhood memory of pretending to be a HORSE, but I'm going to treat myself to some of her poetry today, too. She's a very gifted and lovely writer, and I look forward to her visit on Friday.

Flow is, indeed, a special gift. As is warm rain showers. As is your lyrical gentle writing.

Thanks, Kathy, but Fleda Brown is the really lyrical writer.

Lovely. so needed this this morning as I head to another NOT flowing day.

Sometimes the flow can seem pretty fast and furious, Dawn, and that's when I'm grateful to get out and rest on a quiet shore!