Haiku is a shortening of Haiku no ku, which literally means “not serious verse.” It is always an expression of a present sensual experience. It is never historic, analytic, or didactic. This might be called the First Law of Haiku, or, as I call it, the Zen part. Haiku is always composed of three lines in the syllable sequence 5, 7, 5, which I call the Second Law of Haiku, or structure part.

Haiku is an ancient form of Japanese poetry. The earliest known haiku is alleged to have been written by the Emperor Horikawa (1087-1107), and the form continued into the twentieth century. Haiku was not invented de novo; rather, it evolved, or, more accurately, devolved from earlier forms.

A very ancient form, the tanka, preceded haiku. Tanka’s structure is five lines of 5,7,5 and 7, 7 syllables. This form underwent an interesting metamorphosis into the renga, in which the first three lines were written by one poet and the last two lines by another poet after having read the first three—a cooperation between artists rarely seen in our age of individualism. The final stage, as we know, was a kind of devolvement or disintegration, in which the last two lines were dropped, leaving the first three lines of 5,7,5—the simple haiku. Is it possible that the last two lines fell by the wayside when the second poet decided it would be best not to perfect the emperor’s poem by placing his own lines and/or his head on the block?

American poets have too often written “haiku.” For example, Gary Gay gave us this “haiku”:

what a haiku is

I would like to have heard that explanation...or maybe not. This kite might fly over San Francisco, but never over Kyoto. The Japanese are a very tradition-oriented people. They made the rules of haiku. If one decides to write a short poem of three lines that is good enough to stand on its own but which ignores the structural rules of haiku, why call it “haiku”?

I call my own such short poems “unZen haiku” to avoid being accused of “not knowing what a haiku is.” Mine adhere strictly to the second law of haiku (structure) but depart entirely from the first law, the Zen part—hence, unZen haiku.

I suspect that it is impossible to translate a haiku from Japanese to English. The constraint is not on the first law but on the second. It is quite possible to carry the sense of the poem into English but not while retaining the 5,7,5 syllable structure. The languages are too different. The syllable is the quantum of Japanese. The quanta of English are metric feet. There is no translation equation. Consider Blyth’s translations of hundreds (thousands?) of ancient haiku. They are in perfect 5,7,5 order in the originals, but not in his translations. In other words, his translations are not haiku, and Blyth does not claim that they are. They are English translations of the sense, the present sensual experience, of the original Japanese haiku.

So why do I make unZen haiku? Ask Debussy why he composed etudes. I’m sure that at least part of his answer would be, “For the challenge.”

One rainy day I tried, just for the heck of it, and found it to be confoundedly difficult. Thinking English in syllables is hard enough, but try forcing a coherent idea into the straitjacket of the 5,7,5 structure, and you have a challenge worthy of Houdini. But I also found that the pressure of structure forces one to extract ideas which otherwise one might never obtain. Beginning with one idea, one sometimes watches it metaphorphose as one bends it to fit the 5,7,5 structure. Sometimes the result is a surprise.

Extract is the right word. The process is like panning for gold. It takes a lot of sifting of sand to extract just a little bit of gold. 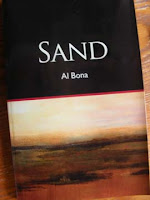 Al Bona’s first book of poetry, Sand, is available at Dog Ears Books. The preceding statement will stand as the prologue to his second volume of verse. Bona thinks deeply on a variety of subjects, so you can read his thoughts on bank financing here. More to the point, here and here are two earlier visits with Bona the poet. We hope for many more to come.
Posted by P. J. Grath at 5:18 AM

I never studied poetry, and didn't even know the structure, or the zen factor of haiku, so I found this fascinating. Add to that the fact that I too worked in the S&L business In the UP) in the early 80's...and was a trainer when ARM mortgages came out...well, I think Mr. Bono and I would have some good conversations. Love his garden as well and wonder why he doesn't have deer eating those lily plants like we do down here!

Dawn, I hope you saw this post after I fixed the formatting of the Gay "haiku." It had come out all in one line when it appeared, and that was unfair to the poet.

Yes, Mr. Bona is quite a guy in many ways. I'll have to ask him about deer and the garden. Funny, because when David sees gardens his first question is, "How do they keep the deer out?" and there are a lot of deer up along the shore where Al lives.

Hi. What do you think of the State now saying that private companies can't trademark and control public roadsigns such as M-22 and M-119?

dmarks, would you like to rephrase your question in haiku form?

I saw it before you fixed the format, but figured it out anyway! :)

Glad you came back, Dawn, so you could see the photos, too. :)

Glad you came back, Dawn, so you could see the added pictures. :)

Funny...when I came back and there were photo, I thought - hey! I don't remember those....I must not have been paying attention the first time! Now I know I wasn't just a crazy person reading too fast.