(If you missed Part I, you can find it here.)

More like it! In the line drawing of hawthorn above, from Illustrated Guide to Trees and Shrubs, by Arthur Marmount Graves, published by the author in 1952, look at those leaf edges with their nicely rounded lobes! The fruits look flatter than mine, more like blueberries in form, but this is a generic drawing, not meant to represent exactly a particular species. Next, in Avril Rodway’s Wild Foods (1988), with illustrations by Zane Carey, I found another promising line drawing: 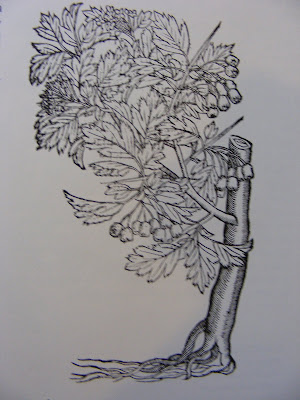 Wild Foods also has full-page color illustrations, and here are a couple details from the hawthorn page, looking very like my specimens. 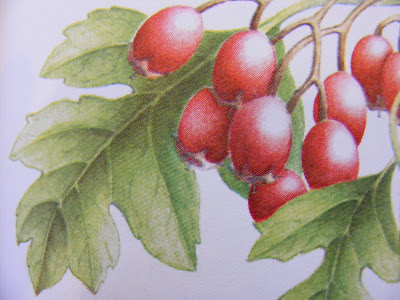 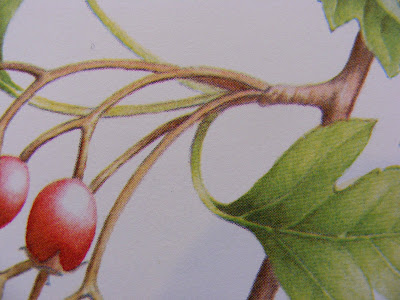 Finally—wow!—Field Book of American Trees and Shrubs, by F. Schuyler Mathews, published by Putnam’s with an author’s copyright date of 1915, gives a dizzying array of hawthorns, beginning on page 211 and going through page 253, although this is only a sampling, according to Mathews, who begins his introduction to hawthorns as follows:

An extremely difficult and complex genus separated by botanists into many divisions comprehending about 200 species. The subtle distinctions of leaf-form, anther-color, number of stamens, and character of fruit, etc., are more or less precarious.... 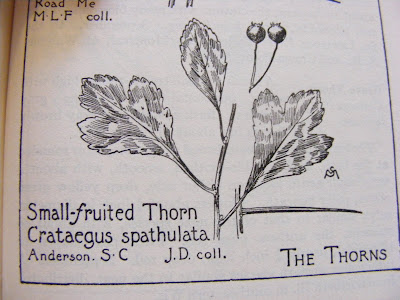 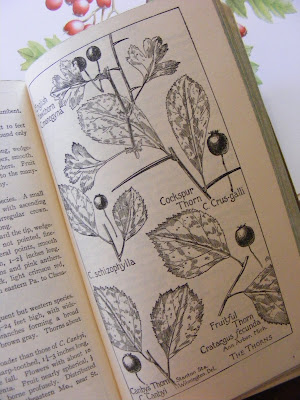 A visit from my botany guru, Chris Garthe of the Leelanau Conservation District, however, confirmed that my leaf and berry samples--and we can now refer to the berries as haws--are definitely hawthorn. I showed him my photo of the little tree, too, which nicely conforms to the description given by Mathews:

The Hawthorns are mostly flat-topped trees, irregular in limb and branch, the shrubby form generally showing ascending and the tree form spreading branches, but no rule is possible in this direction.

“No general rule” seems to be the general rule for hawthorns. Is this why I love them, other than their having been featured in the first volume of Proust’s Remembrance of Things Past? That’s where my initial obsession with hawthorn trees began.

[Pause while bookseller combs house from stem to stern, searching for first volume of Proust. Does not find. Only final volume surfaces. Must go to press without relevant literary quote here. Rats!]

Hawthorns go back centuries in the Old Country, whether in France, England or Ireland. Sometimes fairies figure into the lore, but legends of all kinds abound. Here is a paragraph from Rodway:

The Holy Thorn . . . at Glastonbury in the west of England, which legend has it, sprang from the staff of Joseph of Arimathea, blooms in winter – on Christmas Day, or near it – and cuttings from it flourish in both Britain and America. In fact, reverence for the hawthorn has crossed the Atlantic and many of the same feelings for the tree exist in both Britain and the United States.

(The reason for my ellipsis in the paragraph quoted above is that Carey writes of the "Crataegus family," and there is no such family. Crataegus is a genus within the family Rosaceae).

Now for the disappointing news. Chris and I tasted a couple of haws. 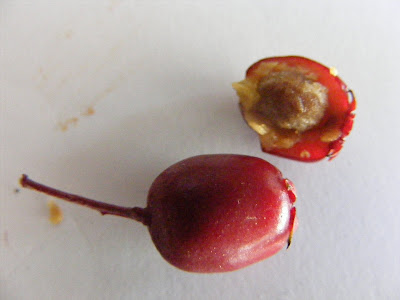 The texture is mealy, taste bland, and each little haw contains a big, hard pit. Turning to new books, I find in Tree & Shrub Gardening for Michigan, by Tim Wood & Alison Beck (Lone Pine, 2003), I find this notation:

Hawthorn fruits are edible but dry and seedy. Some people make jelly from them, or ferment them and mix them with brandy.


Before I tasted the haws, I had imagined making jelly, but now I think I’ll leave them for the wildlife. Anyway, I enjoyed the collecting, the mystery, the literature search and finding a solution. That was plenty of satisfaction for a November day.
Posted by P. J. Grath at 1:08 PM

Right after I read your berry obsession, call for help I went for my lunch time walk and there aws a hawthorn tree/shrub, looked just like your pictures. I picked a leaf and a berry clump and was going to comment that I thought it was hawthorn for sure, then I forgot. The leaves and berries are still in my coat pocket.

Aren't the berries sweet, Dawn? Here's another excuse to bring in THE BORROWERS AFIELD (second book in the series) and Homily's concerns about having to subsist on "hips and haws," i.e., rosehips and the fruit of the hawthorn (both very nutritious, by the way). I should also repeat that there is a lot of variation among hawthorns, and some have fleshier, sweeter fruit than the ones I found. Dawn, cut open one of your haws with a knife. What is the proportion of fruit to pit? How does the fruit taste? I still quite love the idea of hawthorn jelly--if only I could find the right haws for the job.

Well here I am at Java in ER seeing all the lovely botanical illustrations at last. Best of all, I have a new way of saying "dunno": Identification is "precarious."

That was a lot of fun. I think I will not try the haws just yet, as my life is sufficiently precarious without my stumbling around in the underbrush in search of wild foods--but it's good to keep them in mind. Waste not want not.