Santa’s Helpers Helped Me, Too 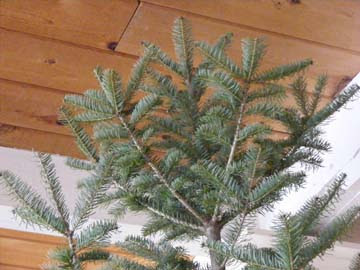 My son’s visit was wonderful, but I’m going to put those photos on my other blog, “A Shot i the Light,” since he and Sarah and I got out for an adventure that deserves pictures not reduced in size. Meanwhile, here at Dog Ears Books I’ve had a lot of help getting ready for the holidays.

First the Von Voightlander family offered free Christmas trees to downtown businesses. Kathy Walraven went around taking “orders.” Bruce, my year-round bookstore helper--I appreciate him too much to call him an “elf”--was here on Monday for tree delivery, and he chose a very tall tree, so tall that when it was brought indoors, even before going in the stand, its top was bent over by the ceiling. What to do? Get a saw and take a foot off the trunk? Elizabeth Gallo stopped in Tuesday morning as I was contemplating the project and proposed an alternative: “Cut a bit off the top instead. No one will ever know [well, no one would have known if I hadn't spilled the beans here], and you won’t lose all the fullness of the lower branches." Great idea, Liz!
Just as I was about to suit action to words, in came Ken Wylie, who helped me lay the Green Giant on its side on the floor to facilitate surgery and then join tree and stand and get the tree not only upright but close to vertical.

So many friends to thank! And yes, those are sweepings and trimmings on the floor. I couldn’t stop to sweep before taking a picture of this year’s glorious bookstore tree! 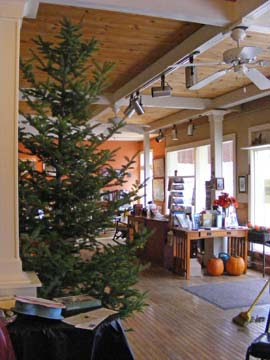 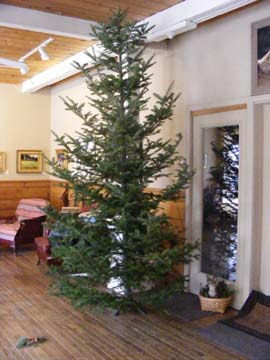 The larger bits of cut-off branches I can never bear to throw out, and this year I was inspired to add them to the basket that holds the bookstore cat. Not a live cat. This one doesn’t catch mice but doesn’t need a litter box, either (nice!). Okay, a Christmas cat seems nice, but something’s still missing. A red bow for its neck? Maybe a bell? Who will bell the cat? I guess I can handle that bit alone. My friends have already given me an awful lot of help. 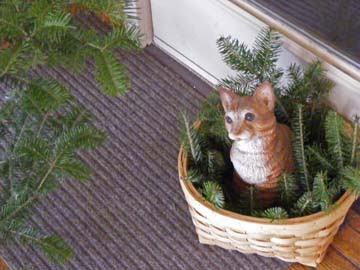 Tree is so beautiful! Love car in branches. Didn't I get that for you when you were inTraverse City? I have photos... Wish you were going to be here for Thanksgiving!

The Christmas tree is beautiful! And so is the Christmas cat! I was thinking I need to take advantage of the warmer weather and get some lights up outside...but I haven't yet. I guess I like to wait to do it until it's blowing snow sideways and it's below zero...then it's extra special. Right?

Yes, Bettie, you did get the cat for me in TC, and I tell people that all the time when they comment on it. "My sister thought I needed a bookstore cat, but I didn't want to have a litter box in the bookstore." I'm glad Mother will be with you tomorrow, and I'll call, of course.

Dawn, I found some solar-powered light strings online but haven't even ordered them. They were going to be for the little pine out at the edge of the field, although it would be the first time I've ever put lights up outdoors for the holiday, ever. More special putting them up in a blizzard? You're hardier than I, my friend!

Ah, yes, the tree is beautiful. Now if only I can find the "Lornaments," which are obviously tucked away somewhere in a "safe place." That old story again!

I like the tree even as it is--and of course I like the cat. I hope that you have a very, very happy Thanksgiving.

I know. I always like the tree in every stage. And am wishing you, Gerry, and ALL a very happy Thanksgiving!