This Passing Time Leaves Gifts Behind 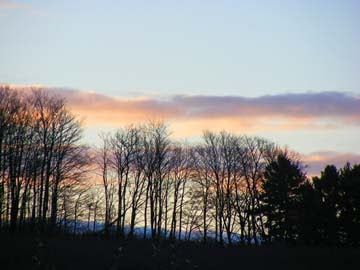 In a week, we’ll set our clocks back. What’s 8:30 a.m. now will then be 7:30 a.m., so we will have more light in the mornings, if I’m working this out correctly. (When these matters come into the conversation, David pleads dyslexia. What’s my excuse?) I do know that this morning’s sunrise made my heart sing. The blinding light, the long shadows, and the blessed, blessed lack of wind all seemed like gifts on this first day of November. 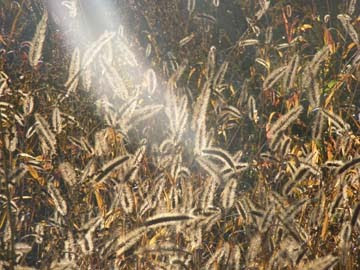 The main item of our day today was a memorial service for friend and neighbor John Brabanec. David has always called John and Julia “the Helen and Scott Nearing of Leelanau County.” According to John’s obituary published in the Leelanau Enterprise,

John and Julia spent their honeymoon in Northport in July of 1948, returning many times to their Land of Delight before settling here permanently in 1975. Together they planted an orchard of 1100 apple and peach trees, became certified in organic practices and were the first to sell quality organic table fruit in Michigan.

It always meant a lot to me to see bushel baskets of their fruit at Oryana Food Co-op in Traverse City. Today, just inside the front doors of Trinity Congregational Church sat two of those familiar “Brabanec” baskets below a hand-lettered sign inviting everyone to “enjoy John’s apples.” Following the service, outdoors on the sidewalk, there were groups of people doing just that, biting into crisp, sweet fruit, the season’s bounty, as they continued their remembrances. I didn't take my camera to the church but brought my apple back to the bookstore to photograph before eating. 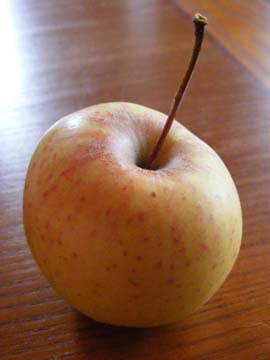 It was a long service but would have lasted all day if everyone who had something to say had had a chance. Wisely, the family chose from their own number and from a circle of close friends those who would speak. The stories were wonderful, some bringing tears, others laughter, many tears and laughter mixed together. Many speakers also read poems, most by Wendell Berry, novelist, essayist, farmer, and John’s favorite poet.

The prayers were wonderful, some from the Christian tradition, others Native American.

The music was wonderful, from the Celtic harp to the hymn “Amazing Grace” to the solo “Blue-Green Hills of Earth” to selections from John’s favorite musical, “Mary Poppins,” with the congregation invited to sing along with “Feed the Birds” and “A Spoonful of Sugar,” that second number a tribute to John’s devotion to hard physical labor and his insistence that his children learn its joys. Then Lennon and McCartney's "Let It Be."

John was a gift to everyone whose life he touched. His trees will live on, as will the example of his life. The epitaph chosen from Wendell Berry says it all:

Having lived long in time,
he lives now in timelessness
without sorrow, made perfect
by our compassion and forgiveness,
and by his happiness in receiving
these gifts we give. Here in time
we are added to one another forever. 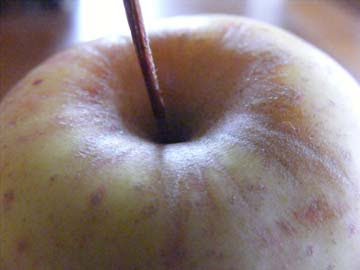 Thank you, Pamela, for giving those of us who couldn't be there a glimpse of John's service. Meanwhile, does anyone know the variety of apple you showed us?

I knew I should have written down the name, but it seemed too strange to take notes at a funeral. There were two varieties, and both had two-word names. I think "smooth" was half of the name of this one. The other was a Spy, but I forget its other name, too.