One Day’s Surprises (Each Day Brings Its Own) 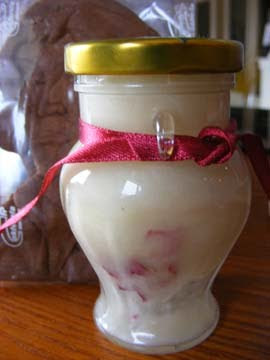 Yes, today is Election Day, and we have no way of knowing how the end of the day will tally up, but I thought a very brief post on another subject might be welcome. After all, politics—don’t you need a break once in a while? Especially after the weeks of robo-calls and slick mini-posters in your mail?

Life in a bookstore is always full of surprises, and I feel lucky to have a “job” that is like that, rather than one in which every day is like every other. On any given day, I don’t know who will walk in the door, what books will be selected, what conversations will take place. Also—and I say this not to solicit more but simply because it’s a fact—a small-town bookseller collects a certain amount of booty. That’s “booty” as in pirate talk, not as in shake-your.

On Saturday last, for example, a friend from Cedar, just back from a four-week vacation in Poland, stopped by to share stories of his trip and brought back a couple of delightful and surprising gifts. One of the towns he had visited was Torun, and one of the gifts Tom brought was a little jar of rose honey. Rose petals are visible, and the honey, he says, is supposed to taste of roses.

I wasn’t familiar with the name Torun but quickly learned that it has more than one claim to fame. Two of those claims are held in the second gift, a gingerbread cookie in the shape of a portrait of Copernicus. Torun is both the birthplace of Copernicus and the gingerbread capital of Europe. 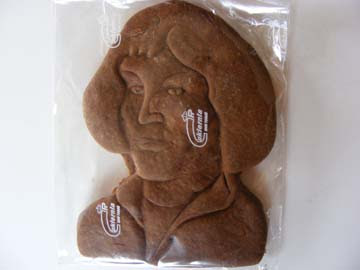 Somewhere in my dim memory banks is an association of Poland with cherries. I wonder if the orchards in Poland look anything like ours at this time of year. Maybe not. I think Tom said it was very cold there already. He might even have had snow while he was there.

What will Election Day bring to Northport and to Dog Ears Books? As David likes to say, “Who will be there, who will we see there, what’ll be the big surprise?” 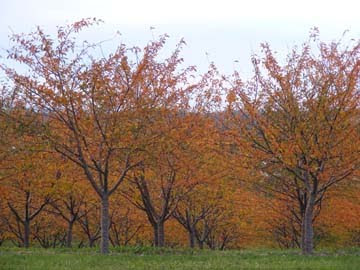 The very thought of rose honey elevates the morning. I used to have an office above a restaurant that sold rice pudding with rosewater and pistachio nuts. On very good days that was my breakfast.

I think the Polish cherries you're thinking of might be morellos, which I believe are a lot like balatons. I find that my favorite cherry varieties are the ones on offer in the markets that day . . .

If we were going to make a gingerbread cookie of a local notable, who would it be? Perhaps we'll have to wait a century or two to learn the true value of someone's bright idea. Or maybe we'll have to make do with Santa Claus and Snoopy.

Yes, I needed a break from the incessant political yammering. Can you tell? But now I'm going to go vote.

Gerry, that rice pudding you describe makes my mouth water! I just looked around a bit and found that Poland grows both sweet and tart cherries. But now I have to think about who in Michigan deserves to be memorialized in a gingerbread portrait.

Rose honey sounds heavenly. I hope you had lots of unlikely and unexpected guests yesterday!

Think I'll save the rose honey for when we have company. Have just started a new jar of raw wildflower honey from NJ's, and that will last me a while.