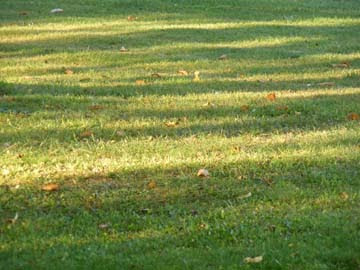 Morning shadows are long on the lawn, chard beaded with morning dew, a last visual hurrah sounding from the beautiful blue, true geranium. 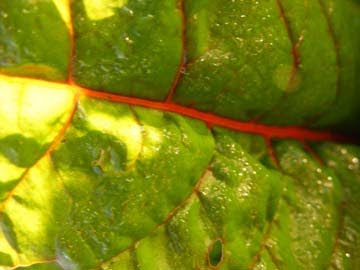 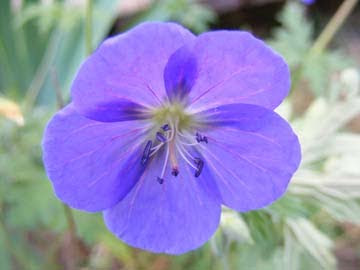 It was another season that the wisteria vine on the barn failed to bloom. It grows, it thrives, and yet it doesn’t bloom, but I let it be, having grown accustomed to it as it is rather than what a garden book or catalog would have led me to expect. 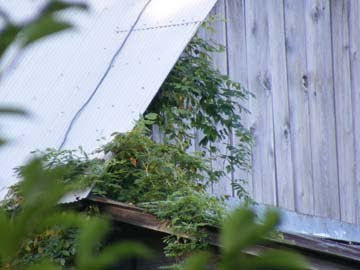 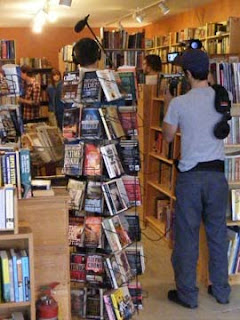 September’s next-to-last weekend was busy and beautiful in Northport. Friday was a noteworthy first for Dog Ears Books when we served for an hour or so as a location for an independent film crew needing to shoot a scene in a bookstore. Quite interesting to watch and listen to the professional young crew while they did many indoor takes. Then, before leaving, the director sent the cameraman across the street to get an establishing shot of the front of the building with the two characters from the scene exiting and walking down the sidewalk in the blinding September sunshine. The plan with this film is to submit it to various competitions in hopes of attracting studio attention. I can’t say I ever expected my small-town bookstore to make a big-screen appearance, but it would certainly be exciting if it came to pass. 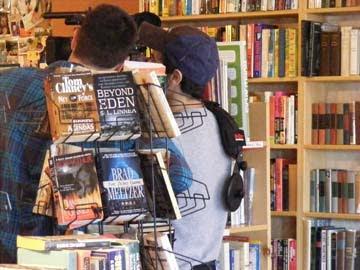 Saturday morning, as I made several walks from bookstore to post office and grocery store, trying to organize my mind and life before the long-awaited afternoon event, a passing parade of Model A Fords gave me an excuse to pause for a moment. One license plate I saw said ‘Ontario.’ The drivers had stopped in town before going on to Grand Traverse Lighthouse. 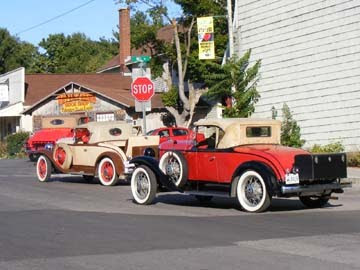 But it was Gustav Niebuhr’s Saturday visit to Northport that was the big weekend headliner. In his publicity photo (sorry, Gustav, but it’s true!), he looked rather forbidding, and I struggled not to be intimidated beforehand. No worries, as the Australians say. He was altogether charming—so very relaxed, friendly, easy-going, low-key that he could have been a Northporter! Women from Trinity Church came early to the bookstore with tablecloth, flowers and refreshments, and between the times when Niebuhr was busy signing books and talking with customers and I was busy selling books, there was time for us to have bits of pleasant conversation. 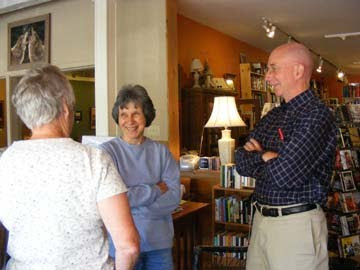 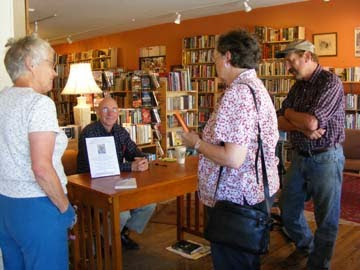 (One thing I realize missing from my photo archive, however, true throughout the years, are pictures of me, the bookseller, with visiting authors. I am always taking the pictures, never in them. Should I be more of a publicity hound? More concerned with a record for posterity of my role in these events?)

Organizers and I were pleased with the turnout, but someone suggested I bring books up to the church for his lecture, too, as there would likely be people there who hadn’t made it to the signing, and that was indeed the case. Great attendance for the Fifth Belko Peace Lecture and no one disappointed: Niebuhr is a passionate, engaging speaker, and he had important things to say about interfaith projects in our country and sources of hope for peace that we can draw on, even while reminding the audience that such projects for peace are hard work. One point he made from his journalistic background seemed especially important to me in countering voices of despair, and that is that acts of violence are highly visible and quantifiable, while work in the service of peace and understanding, much quieter, impossible to quantify, usually flies under the media radar.

Small footnote to this story. Several people dropped in during the course of the afternoon to see Sarah, disappointed that the mascot had taken the day off. “Don’t take it personally. You’ll notice they weren’t coming to see me, either!”” I said to the guest author, who seemed more amused than offended and quite content with this taste of small-town Up North.

So, for those of you who missed her on Saturday, here's the little scene-stealer: 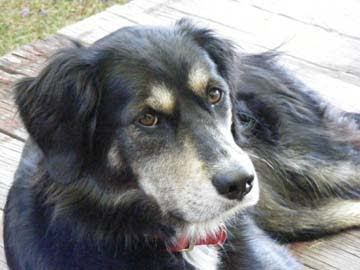 Love this post! It's got everything: your fabulous photos, your homey expression of serious thoughts, your very personal connection with your customers and your community. Wonderful!

Welcome to my life, Helen!!!