Not a Holiday Topic 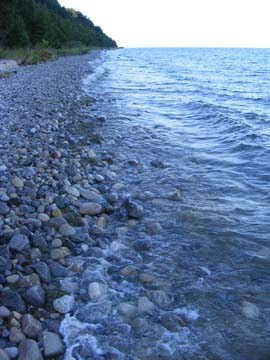 Don't let the image fool you. I haven't written today about the joys of life Up North. There's nothing here about books or reading, either. Sorry, summer is over, it's time for a rant, and here's mine:

There was a time, not so long ago, when a late credit card payment resulted in a $10 late fee: ten dollars added to what was owed, ten dollars that would not reduce one’s balance a cent and for which one had acquired no new product. I don’t know about most people, but I found that penalty a sufficient deterrent. It happened to me once, and I vowed it would never happen again. Lesson learned.

Well, now that doesn’t matter. It doesn’t matter how good your payment record is or whether you pay off your balance each month or how small that balance may be, because usury laws are a thing of the past, and credit card companies have realized that, sooner or later, everyone slips up. Reality and the freedom of the market thus open the door to unlimited opportunities.

The other day I received, as a “valued customer,” a letter from my credit card company. It was not congratulating me on my good payment record, let alone announcing a reward for that good record. Far from it. This was merely a “timely communication” (the anonymous letter writer patted the company on the back for their commitment to “timely communications” to customers) of changes to my account. There were several, but one stood out. The fee for any late payment, i.e., any payment received after the due date on my monthly statement, I was informed, will now be $39.95. Slip up by a day? Gotcha!

Forty dollars, however, is only the beginning, because—read the writing on the wall--the consequences for a slip-up are no longer aimed at merely encouraging timely payments. The companies have discovered a gold mine in punishment. So now a customer making a late payments is punished as severely as one writing a payment check that gets returned for insufficient funds: your interest rate goes up! How much? As a “valued customer,” I am informed by this “timely communication” that in the event of a late payment “the current penalty APR would be up to 30.24%.”

The card I hold is the State Democratic Party MasterCard. These days it is possible to hold credit cards to benefit any number of organizations. I could have taken out a card bearing the name of Western Michigan University or the University of Illinois or any number of organizations looking for revenue from supporters. The bottom line, however, is that the ultimate organization supported with the financing of credit card debt is the credit card company. This is reasonable, given that the company is the lender. Their terms, fees and punitive interest rates, should I falter on the path in the months ahead, are not reasonable but usurious. Unfortunately, usury is no longer against the law, and those individuals making company policy are no longer held in check by either ethics or civility. It’s a jungle out there.

The letter includes a brilliant final touch: “You have options.” Basically, I have two options, the first of which is to accept the new terms, the second of which is to have my account closed.

Where did this strange and perverted notion of contract arise, and what in contract law makes it possible, or is money-lending outside of contract law altogether? I have not studied law and ask the question out of genuine perplexity. How is it possible that an “agreement” may be changed, at any time, by one party and never by the other?

In defense of the company, I should recognize that no one has threatened to break my kneecaps if I’m late with a payment. Perhaps that will come in a future communication. What, after all, should one expect for a good credit record but threats?

--There, that's off my chest. Now to enjoy the holiday weekend, which for me will be the last "summer" weekend in Dog Ears Books. Autumn will be good, though, with some interesting events coming up in September and October, so keep reading, and I promise not to crank like this every day.
Posted by P. J. Grath at 4:17 AM

My favorite conversation with my own credit card provider:

"I paid the balance in full on the due date at the Traverse City branch. Why did you charge me a $39 late fee and add interest?"

"You paid it after noon. Close of business is at noon."

After a stunned silence we had a brief and pointed conversation. The representative removed the offending fee in recognition of our "valued relationship."

This month I received the same kind of Notice of Changes that you describe. I think all the banks are doing the same thing. The new terms are, essentially, that the terms hereafter will be whatever the bank says they are, take 'em or leave 'em. I have about decided that I can leave 'em.

Please add this to the rant - if you are late on one credit card every issuer of any other cc you hold has the right - without notifying you - to raise your interest rate on their card. Despite government's trying to attack some of these policies the ordinary person is truly left with only the choices you mentioned - accept the terms, close the account.

Gerry, your experience would have stunned me, too, but it does pay off (sometimes, and why not try?) to argue, and when that fails, to ask to talk to a manager. There is always someone who can get the fee removed if you make a strong enough case.

Deborah, you are so right to add that reminder. I didn't think of it, as I've only carried one card for years now--easier to remember to keep it paid off.

Going with a card is one option, though it makes many things difficult if not impossible, e.g., renting cars. I advocate using cards sparingly and watching the notices like a hawk and working politically for the reinstatement of financial regulation and oversight.

What you didn't realize is that on May 22 Pres. Obama signed the Credit Card Accountability, Responsibility, and Disclosure (CARD) Act of 2009, and effective August 20 card issuers were required to give you a 45 day notice before raising your rates. Pretty much everybody got their rates raised close to the day before the act went into effect. Last chance to screw the consumer.

The Act also establishes some across the board rules regarding due dates and close of business, so shenanigans like charging a late fee if you pay after noon won't be allowed anymore.

Oh, and it also wipes out "universal default." So once it finally is completely in effect (which will be next year - gotta get a few more gouges in before they stop) - all these complaints should be a thing of the past, and the credit card companies will have to come up with new "innovations" to fleece their "valued customers" with.

Do I sense a kindred spirit, billiecat? Regulation--not always a bad word.

Belatedly I see (looked at this post again to see why it was so popular, my all-time #5) that my earlier comment above should have said "Going WITHOUT a card...."