A Little Time Up in the U.P. 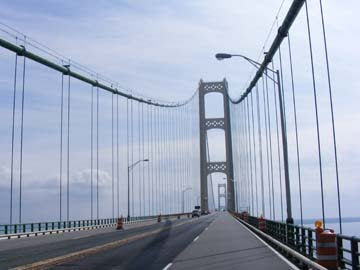 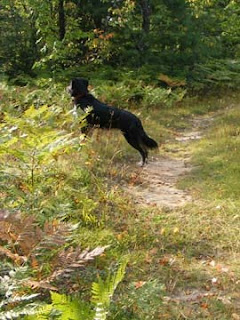 We spent the week after Labor Day above (that is, north of) the Mackinac Bridge; Labor Day we spent getting there, which entailed a three-hour wait south of the Straits of Mackinac. I knew—have known for years; have considered doing it myself sometime--about the Bridge Walk but had forgotten it in relation to our trip north. It was frustrating to be in standstill traffic so near to my goal of a Lehto’s pasty (8 miles west of the bridge on U.S. 2), but the weather was glorious, and we weren’t stuck on the expressway outside Chicago, and none of the three of us (counting Sarah, the dog) desperately needed a rest stop, so we got through the ordeal relatively unscathed. The Bridge and the view always more than repays any delay in crossing. The Straits! Magnificent! Alas, however, we arrived at Lehto’s just a minute after closing time, and I had to wait until our return trip six days late for my Yooper pocket sandwich. 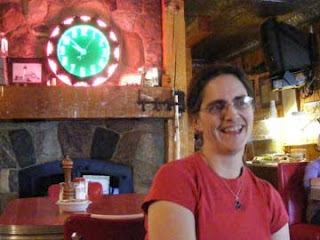 I won’t give a blow-by-blow, minute-by-minute account of the week but just give highlights and glimpses. One highlight was the news from Ellen Airgood, of the West Bay Diner in Grand Marais, that her novel has been taken under contract by Viking Penguin! We are thrilled for her. After five years of hard work, disappointment and revisions, she had considered putting the project aside for good and taking life easier. She and husband Rick would still be commuting a long way over rough road to operate their restaurant from 7:30 a.m. to 7:30 p.m., so “taking life easier” would have been definitely relative. But it turned out she couldn’t do it. “I couldn’t figure out how to be me without working on the book,” she told us in her usual simple, straightforward manner. Then came the call. She remembers that she was waiting for an order from the kitchen: two cheese omelets with crispy bacon and pumpernickel. Joy? Joy who? Oh, good heavens, can this really be happening? The title of the novel is still in question and may be changed from Ellen’s original Stone Lake, but while we’re waiting for publication in 2010 we can enjoy again her essays in Stories From Where We Live: Great Lakes, “At Uglyfish Lake.”

While we were in Alger County, David and I found a piece of property to dream over, as usual. We also made forays out to the Soo and to Munising (visiting Wagner Falls for the first time) and little excursions to the Seney Wildlife Refuge and Hurricane River. 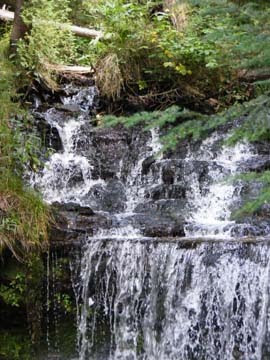 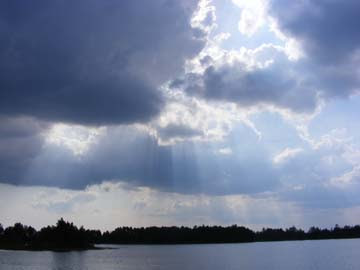 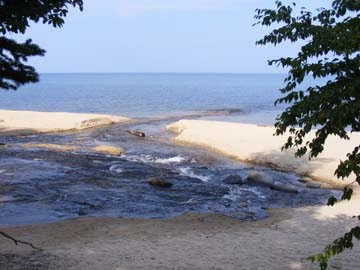 We lingered at the bridge over the East Fork of the Fox River, where the boggy views enchant us every year. 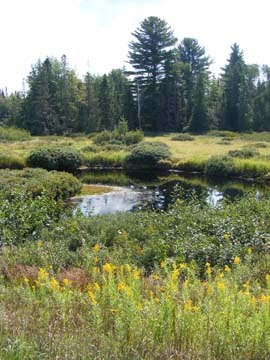 And, as always, it was often the smallest of sights that caught my eye: 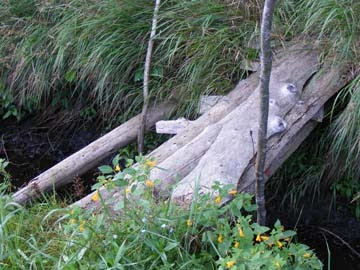 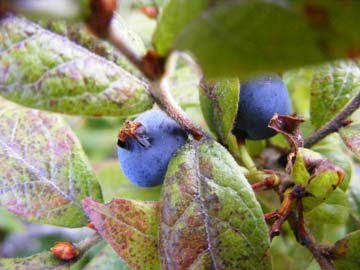 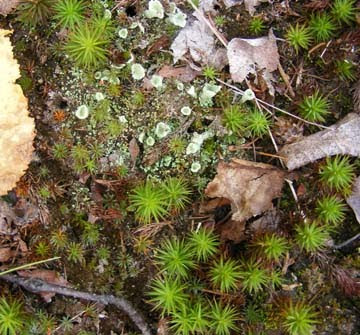 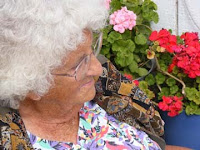 It was good to find our friends at the Superior Hotel in good order, and it was good to sit in the sun with Bess Capogrossa in front of the hotel and watch the world go by. Even there, the world does go by. Grand Marais has a lot in common with Northport. For example, one can cross intersections on the diagonal. There are very few secrets in either village. The harbor is beautiful in both towns. Most new residents are retired, and both K-12 schools, now “out of formula,” struggle to remain open. Northport is at the end of a peninsula, and Grand Marais seems like it’s on the edge of the world, what with the expanse of Lake Superior stretching north right from the foot of the village. Is this why it feels like our home away from home? 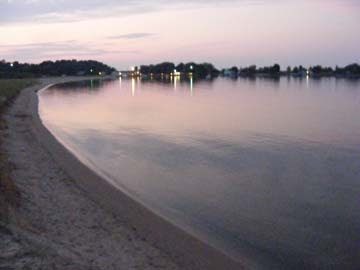 I think what draws people north gradually recedes farther north, and we follow. First the UP, then the Keweenaw, then Isle Royale--next thing you know we're poring over maps of the Northwest Territories.

Wonder if I will ever get to Isle Royale. Have you been there, Gerry? The funny thing, to me, is that our U.P. friends tend to go south to the big cities when they look for a getaway. One goes to Detroit to visit the DIA, a family heads for the Grand Rapids malls, and someone else, a Chicago native, has the Windy City as his destination. On second thought, I guess it isn't crazy at all, is it?

Lovely, Pamela. If I had a GPS, I'd want GPS settings for all those spots you photographed. Instead, I will hope to discover them one day.

At least half the fun is discovering places for yourself, I think. That picture with Sarah (second on page) was down an unnamed two-track that led "nowhere," and we loved it.