Spring Takes a Turn Toward Winter 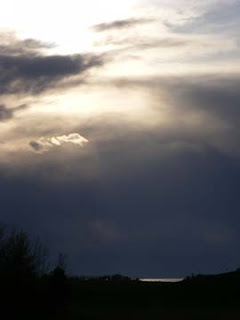 Yesterday afternoon the temperature dropped like a stone, and by night a gentle rain was falling. Sarah was disappointed, but it was not an evening I wanted to spend exploring the woods. Instead I tucked under the covers early with Louis Bromfield’s THE RAINS CAME, substituting (in imagination) monsoon in India for sedate and chilly Michigan drizzle.

It's supposed to warm up again by Sunday.

I’m thinking about a comment made recently on this blog, to the effect that the way to protect and preserve nature is to exclude humans from land set aside for nature. National wildlife refuges, as distinct from national parks, do not absolutely exclude human beings but limit access and exclude most human activities: the refuges are for the animals, not for human recreation. But if we say that THE way (implying the ONLY way) to preserve nature is to exclude ourselves from it, haven’t we simply bought into and carried to its terrible logical conclusion the mistaken idea that we are something separate from nature, set apart, “unnatural”? When Richard Louv, author of THE LAST CHILD IN THE WOODS: SAVING OUR CHILDREN FROM NATURE-DEFICIT DISORDER, says that human beings as a species and children in particular need connections and interaction with the natural world, he isn’t saying (by a long shot!) that wildlife refuges should be invaded by dirt bikes, and I don’t see a contradiction between wildlife refuges for wildlife and treehouses in the backyard for kids. Louv’s concern is less with wildlife refuges than it is with municipal ordinances and restrictive covenants that don’t leave room for kids to play outdoors in any other way than as narrowly prescribed by organized sports and supervised games. And while Michael J. Vandeman argues that we don’t have to have contact with something to value it, I do think that seeing ourselves as separate from nature is what led to our viewing it as something to use, to dominate, and I don’t see an absolutizing of that separation as the cure for the disease.

I asked Kay Charter, of Saving Birds Through Habitat, what her take is on preserving species, and here’s her response:

“If we really want to help the remaining wildlife on
our planet, the greatest single challenge is to rid
our environments (both in wild areas and in our own
landscapes) of non-native plants. The hard fact is
that setting places aside and making them off limits
to humans will not help when alien plants (animals,
insects, etc.) take over and degrade what might
otherwise be prime habitat. Moreover, there is
precious little space left which can be set aside.

“As well, many birds, frogs, and other types of
wildlife can live very well with humans, so long as
they can find the things they need for survival. And
for many of those creatures, especially birds and
amphibians, what they need is insect biomass. That
biomass is supported by native plants. If you want to
read a great book about the subject, order Douglas
Tallamy's BRINGING NATURE HOME. He argues (and I
think rightly so) that because there is so little land
left for wildlife we must make our yards more
accessible to them. And we can only do that by
incorporating native plants into those yards.

“An aside: we are learning that many birds we formerly
thought required large territories (eagles and Sandhill
Cranes come first to mind) will nest in very close proximity
to humans...IF they are provided with what they need.”

Please let Kay know that my yard has exceptional insect biomass, and that she is welcome to share the information with birds of her acquaintance. The banquet over here east of the Bay is open 24/7.

I suspect conservationists who want to exclude human beings from wilderness preserves exempt themselves. ("Well, not me, of course, as I am uniquely qualified to keep an eye on things for everybody else.") Oh blather.

Of course we need to keep everyone's activities from disrupting the neighbors' lives. The Bigelows wouldn't dream of repairing their car in my living room and the bear who lives in the water meadow doesn't make free of my pantry. (I rather think he might dream of it, but he respects my boundaries.) I try to be a good neighbor, too. After all, we're all in this together.

Wonderful out-of-print book called THE VOICE OF THE INFINITE IN THE SMALL makes a convincing case for humans to make more of an effort to get along with insects and spiders and not make constant war against them. Yes, I agree that we're in it (all of IT0 together, world-wide.

BRINGING NATURE HOME: HOW NATIVE PLANTS SUSTAIN WILDLIFE IN OUR GARDENS, by Douglas W. Tallamy, is now available at Dog Ears Books, on the recommendation of Kay Charter.