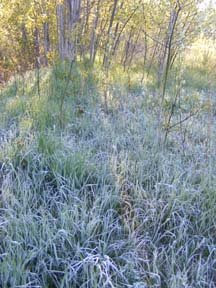 Frost this morning turned dewy as the sun hit the meadow, making for wet walking. Back to books and three short chapters from the end of THE BOOKWOMAN’S LAST FLING, having raced to this point, I find myself in a familiar quandary: whether to dash to the finish or stretch it out, reading a page or two at a time and putting the book down frequently. Bruce was disappointed that there was so much about horses in the story--he would have preferred a stronger book collecting focus--but that was a draw for me. My only disappointment came early on when I realized that the bookwoman of the title was already dead years before the story began. I would have liked to meet a real bookwoman in the Janeway series. But since she wasn’t going to be present in the action, I was glad the horses were, and I’m reluctant to leave the cozy camaraderie of the shedrow, the sweet-smelling stables. My sympathy for book cop Cliff Janeway has increased monumentally since he avowed his love for Walter Farley books at the beginning of this story. John Dunning’s bookstore website is interesting, too. 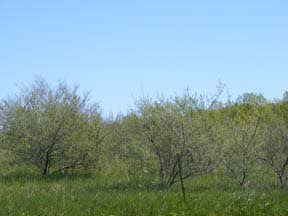 Taking a break to stretch out the story's ending, I got to poking around online for helpful information to combat the autumn olive scourge (this picture is NOT my meadow, which will never look like this as long as I have breath!) and came upon interesting herbicide news. First you have to realize that Roundup and its sister herbicide Brush-Be-Gone (active ingredient glyphosate) has long been the American agriculture herbicide of choice, not only for farming but for lawns and gardens. A systemic, when sprayed on living, growing plants (weeds or otherwise), it is carried through the plant’s system to the roots, causing death by inhibiting the enzyme necessary for growth. Sounds like just the thing to use on autumn olive, doesn’t it? And a friend of mine swears by it, brushing it full-strength on the trunks he cuts. We might want to rethink reliance on glyphosate, however, for a couple of reasons. One is that its widespread use has challenged some weeds to develop immunity. The "fittest" are learning to survive despite it. Monsanto, the manufacturer of Roundup, says resistance to glyphosate is not a significant problem, and so far it isn’t; if resistance were to increase significantly, however, farmers would be hard pressed to find a quick replacement, since Roundup has come to have a virtual monopoly on the herbicide market. See full article: New York Times, May 28, 2008 (too long an address for me to get the link successfully inserted here).

Another concern is that because Monsanto has also developed, besides the popular herbicide, genetically engineered plants (“Roundup-ready”) immune to it (so that herbicide can be sprayed directly on the crops themselves without killing them), some say there is an increased level of herbicide now in the food chain. The fear has been bruited about in the law courts but so far decided in Monsanto’s favor. The idea of a systemic is that it goes through the system of the living weed to kill it and that any residue in the soil quickly disappears. What is supposed to happen when the systemic is sprayed on a field of soybeans immune to it? Is it, as the manufacturer claims, as “safe as table salt”? Has all trace of poison vanished before the soybeans are harvested?

Whenever we make ourselves dependent on one crop (e.g., potatoes) or one product (e.g., Roundup) to the exclusion of others, we make ourselves vulnerable. This observation is a long way from answering the autumn olive question (how to rid ourselves of it), but since all things in nature are connected, it’s impossible to say where any “simple” question will lead. This is how it was with THE BOOKWOMAN’S LAST FLING, too. An initial simple question, “What is the value of this private library?” led to questions about missing books and finally to questions of murder. Given the unpredictability of any path of questioning, one might be tempted sometimes to heed the advice of Ogden Nash and “if called by a panther, don’t anther.”
Posted by P. J. Grath at 6:03 AM

We have dozens of books in an entirely different Janeway series, so to speak. I don't think there are horses in them.

Dunning began with BOOKED TO DIE and THE BOOKMAN'S WAKE. His protagonist, Cliff Janeway, is a former cop turned Denver bookseller. In THE BOOKWOMAN'S LAST FLING, the fifth in the series, Janeway seems a little weary of bookselling and finds excitement in his boyhood love of horses and in doing some real sleuthing again.

What is your janeway series, dmarks?