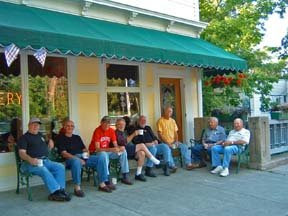 Here, once again, is the Voice of Bruce, giving his inimitable review of Cormac McCarthy’s NO COUNTRY FOR OLD MEN:

“The story is set in a small town in Texas, so I guess we could call it a Western, but it’s not one that John Wayne would recognize. No one wears hats, so you can’t tell the good and bad guys apart. And everyone drives 4WD vehicles instead of riding horses, and they shoot at each other with machine guns instead of six-shooters. And all that violence--. John Wayne would be horrified.

“The plot centers on two main characters. The first is a young man who stumbles on a cache of drug money and decides to run, with the drug dealers in hot pursuit. The second is the local sheriff (a John Wayne type), who wants nothing but a peaceful life for his town and himself, but now he feels compelled to catch the druggies and rescue the misguided young man. It’s rather like the odds Gary Cooper faced in 'High Noon,' only the ending here is different.

“McCarthy contrasts the rather ordinary lives of these two characters with the violent world that they encounter with the druggies. He uses the contrast to illustrate his theme that America has become so violent that we folks of the older generation, who are traditionally in charge of maintaining law and order, can no longer fight successfully against the tide of crime and lawlessness. Thus the title of the book.

“The book’s violence, while disturbing, is a necessary part of the story. Fortunately, while reading (unlike while viewing a film) you the reader can skip over the worst of these bits and enjoy an entertaining story. So even though the film won Best Picture, I recommend you read the book instead.”

Oh, that's funny. I've not yet read the book so I did not see the movie, but I will do both. You should keep matching books titles with your photos--you have a talent!

Finding this picture from last summer was a happy accident this evening. David agreed with me that it would be funny, even though he's one of the "old men" on the benches! For those who don't know Northport, I should note that these are coffee regulars at Barb's Bakery on Mill Street.

read the book, see the movie...the coen's did a masterful, truthful adaptation. be warned however, neither medium was a pick-me-up. cormac's never going to be accused of being maudlin. pamela, do you take these pictures yourself?

Pamela, you take great photos! Haven't read book or seen movie though plan on doing both.
I notice David is the only guy in his shorts - nice smile on his face.

Oh my goodness! For a moment, albeit brief, I thought that the bakery was open for the season. Of course, David's attire should have immediately brought me back to reality. But winter lover though I sometimes am, I must be exceedingly ready for spring and the pleasures that the impending season brings; walks in the woods, seeking the elusive morel, birds twittering about as they prepare for their next generation and the many other joys of Persephone's return. However, as eager as I apparently am for Barb to throw open her doors, I am also a bit reticent to see shift of the daily convergabulators (I know that Webster wouldn’t recognize that term, but I like the feeling that it evokes) away from Donna’s wonderful hospitality we experienced over the past the winter season.

Anyway, you’ve succeeded in whetting my appetite for the next season. Oh yes, I believe you may have whetted a few appetites for the reviewed subject as well. As usual, reading it would be better than staring at a screen.

Oh, z, you dreamer! Awnings up, leaves on trees--in March? Hardly! But yes, things have been very congenial at the Treasure Chest these dreary winter mornings.

Yes, Joe, they're my pictures. I must say, I'm getting tired of snow scenes so was glad to pull this one out of the archives. And don't you just love Bruce's tongue-in-cheek take on books and movies?