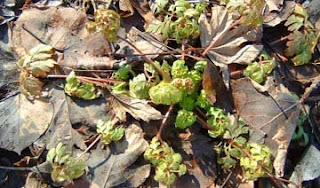 At 1:48 a.m. the official vernal equinox occurred as the sun passed over the equator. These little cranesbill, modestcousins of the true geranium family, weren’t waiting for the equinox but showed their green at least two days ahead of the astronomical divide.

Here’s a topic I’ve had simmering for a while now, long enough ago that it’s not cutting edge news any more, but the Written Nerd’s current blog posting reminded me to get with it:

Some parents in St. Paul, Minnesota, are dismayed and alarmed by a new elective offered at one area middle school: “The Graphic Novel.” (Sorry to report that the link I had for this article no longer works. You can search for it and buy a copy of the piece from St. Paul’s Pioneer Press.) Is this a “dumbing down” of literary content, indeed of education itself? I think the panic and anger are misplaced and way overblown.

My sister the reading specialist always says that anything that gets kids reading helps them read better. If reading is enjoyable, they’ll want to read; if it’s boring (to them), they’ll turn off. Graphic novels are not boring to kids. Fifty years ago, kids were sneaking comic books into their school desks. Today’s graphic novels are several cuts above “Archie and Veronica,” but even the comic book lovers of that era were reading, as opposed to sleeping on their desks or staring blankly out the window.

Who doesn’t love pictures? “Readers aren’t visualizing in their minds if they have the pictures on the page”? Maybe this will nudge them in that direction, especially as they begin to write and draw their own graphic novels. Even if they don’t make their own, why wouldn’t their minds get in the habit of making pictures to go with text if that’s what their normal experience? And does anyone ever argue that looking at paintings is bad because the imagery is given by the painting rather than generated by the viewer? On the other hand, lack of pictures is no guarantee of literary quality. I won’t mention any popular pulp series books for boys and girls, because I like to keep the blog positive, but the value of a book is in its content and style, not its format.

The article mentions how helpful graphic novels are for ESL students. I can vouch for the help Mickey Mouse gave me in picking up colloquial French and even very common, everyday words and expressions my high school textbook had never mentioned.

Good grief, the class is offered as an elective!

Last but not least (and you thought “elective” was my trump card!), many of the same adults enraged by graphic novels in schools probably think all that computer time in schools is just ducky, with very little idea what students are actually doing at computer screens.

Well, now comes a whole new line of comics/graphic novels (???) for very young children, those just learning to read. The woman responsible grew up in France, where literary comic books have a long, respectable tradition, and when English gave her trouble here in the U.S., Françoise Mouly found American comic books helpful in making the language transition. An artist herself, she went on to arrange for the publication of high-quality artistic comic books such as she had known in France. The first one was MAUS. Ring a bell?

But, a confession: I haven’t gotten into graphic novels yet, either on my own or at Dog Ears Books. I’ve learned to be careful ordering books in a genre I don’t know. It’s important to find out from lovers of that genre which titles, authors and illustrators are highly regarded. I trust myself to judge many genres, but we all have our weak spots. Suggestions and guiding tips welcome!

After I’d written the above and saved it as a draft posting, I went to the post office, and while picking up a package at the counter I noticed a magazine left behind. Well, it was BOOKLIST, and the current issue is--YES! TA-DA!--“Spotlight on Graphic Novels”! Serendipity, synchronicity, and lucky for me in addition that my bookstore is in such a small town that the librarian, whose magazine it was, agreed to loan it to me for a few days. The two of us are in the same boat, both needing to update our stock of information. (I’ll still welcome tips, hints and suggestions.) I guess I know what my required reading (self-imposed) is for today.
Posted by P. J. Grath at 5:16 AM

While the set Books does include the subset Comic Books, and a lot of material blurs the lines of definition, I prefer to keep more of a distinction between the two, and I think most retailers would be better off doing the same and focusing on one to the exclusion of the other. That said, there are a few "graphic novels" (and I really have strong feelings of distaste for that term) that some shops might find worth stocking. I've only just recently started re-reading parts of my own collection and can probably find something to recommend soon; in the meantime, this list is not a bad starting point for those new to the comic scene.

Thanks, anonymous. Though Mee-kay helped me with my French, it isn't comics I'm looking to stock. Will take a look at the list you linked.