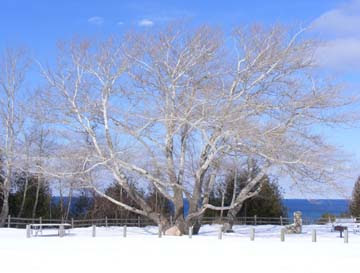 Here’s another Peterson Park shot from Friday. This cottonwood is magnificent in all seasons but seems especially so in winter, bared to its bones. Sunny days and starry nights we’ve been having—consequently, all very, very cold!

Another early morning walk today, but not officially as early as the eastern sky was saying. I do not like “springing forward” and losing a morning hour just when dawn instead of dark is finally beckoning me outdoors. So this morning when the clock (should have, if I’d set it ahead) read eight o’clock, Sarah and I were out in the fields, and I was murmuring, It’s really only seven o’clock….

I started writing about this the other day, and here goes the rest: Near the end of his page-turner of a book, PREDICTABLY IRRATIONAL, Dan Ariely compares the behavior of diners in an American restaurant with a similar experimental group in Hong Kong. Rather than each ordering what he or she most wanted, only the first to give an order at the table did so. Americans ordering subsequently, in order to emphasize their individuality, chose to order something different from the first person; in Hong Kong, a sense of group solidarity had subsequent Chinese ordering whatever the first person had chosen. Ariely’s point is not about cultural differences. It’s about human sameness. Whether seeking to stand out from the crowd or to be a part of it, individuals in both cultures put their own real preferences aside rather than choosing to (as the utilitarians would say) maximize their personal eating pleasure. We are, it turns out, not all that “rational,” after all. We make the same kinds of failure-to-maximize choices again and again, contrary to classic economic theory.

Now the author asks—here’s a question I really love!—“Wouldn’t economics make a lot more sense if it were based on how people behave, instead of how they should behave?” Because his studies show that economics isn’t any more hard-headed or reality-based than philosophy! Economists as a group (behavioral economists like Ariely being the renegades) are as wedded to idealistic assumptions as Immanuel Kant. Supposedly more rigorous sciences are not immune, either. Medical research on efficacy of drugs and even surgical treatments is doomed unless it also takes into account the beliefs of medical practitioners and their patients, because belief can plays a role in so-called objective results.

Another group of Ariely studies had to do with the effect of exposure to certain numbers or words on unrelated tasks performed following exposure to the numbers or words. People who focused first on small numbers unrelated to price gave lower price figures when asked the most they would pay for three different items; those focused on higher numbers indicated a willingness to pay more. Experimental subjects asked to recall as many of the Ten Commandments as they could or even simply to read a short statement about an honor code were much less likely to cheat on a test given immediately afterward, even in a situation designed to invite cheating. College students given a list of words associated with old age walked more slowly when they left the building than students given a different set of words. In the face of this evidence, can anyone still maintain that constant media violence has no effect on the behavior of normal individuals? Maybe--.

There is in this book no acceptance of defeat. There is concern—deep concern—but also suggestions (both general and specific), and there is hope. What fun it would be to spend an evening with Dan Ariely! Well, I just did, so now it’s your turn!
Posted by P. J. Grath at 5:42 AM