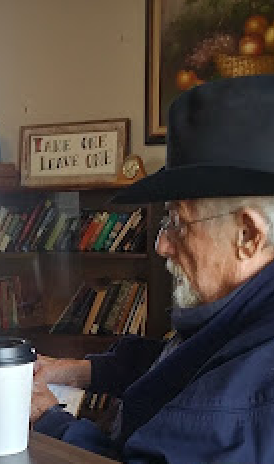 Do you read for pleasure? For work? For information?

Information, of course, as we all realize, is of many sorts and sought for many reasons. (Egad! Don’t I just sound like that boring sister, Mary, in Jane Austen’s Pride and Prejudice? Forgive me, please!) For example, friend and I were puzzling over the research findings of the newest Nobel Prize winners in quantum physics, that of “entangled quantum states, where two particles behave like a single unit even when they are separated," but a sentence my friend read to me from the New York Times over the breakfast table (she is visiting from Ann Arbor for a couple of days) only increased our bafflement:

Measuring one of a widely separated pair of particles could instantaneously change the results of measuring the other particle, even if it was light-years away.

"So," I asked, "are the changes in the particles or only in the measurements?" We quickly leapt to the uncertainty principle, which I have always liked because it points to limits of human knowledge, and I like the principle for its reminders that human understanding of the universe, however much it expands, will always remain partial, but my question remained unanswered. I can phrase it another way: Are we learning more about particles or more about measurement?

If you follow the link above, you’ll see further links to what we might call (awkwardly, I admit) sub-subjects, and the one that caught my eye asked, “Does colour exist when no one is watching?” Unfortunately, the diagrams that might have answered that question (did they?) were accompanied by text in Swedish. I was reminded, though, of conversations with my beloved husband, the Artist affirming to me more than once that color exists only in the presence of light – as what philosophers call a “secondary quality,” something partly in the object and partly in our own perception. I always asked, though I knew the answer, if I couldn't turn the lights on very fast! and catch color waking up.

I will never be a quantum physicist.

Physicists and physicians, engineers and programmers need information for their work, but an author writing historical fiction also reads for information related to her work, though the work is very different in kind. She is recreating a whole world, not exploring the world of today. And writers of speculative fiction (science fiction, fantasy, dystopic narratives, etc.) create imaginary worlds, but they also need to be grounded in whatever natural, physical, and social sciences give plausibility to their imagined worlds. Presumably, those scientists and novelists are doing work they live and so find pleasure in the reading they do for information.

Others of us are just plain curious. I read history and economics not professionally but because I crave understanding. Why are things the way they are? How did they get to be the way they are? My larger point – one of them, at least – is that reading for pleasure does not have to be only easy reading, and by no means does reading pleasure have to be limited to fiction.

Here, for example, is part of a preface to a book on geology:

This work attempts to hold a position between textbooks and books of light reading. The formal textbook would not suit the class of readers addressed. The style of light reading would have been unworthy of the theme, and would not have supplied the substantial information here intended….

The method of treatment is simple. The reader begins with the familiar objects at his very door. His observations are extended to the field, the lake, the torrent, the valley, and the mountain. They widen over the continent until all the striking phenomena of the surface have been surveyed. Occasionally, trains of reasoning suggested by the facts are followed out until the outlines of geological theories emerge. The course of observation and reasoning then penetrates beneath the surface … striking fossils … nebular theory … retrospect and reflection … a relish may be stimulated ….

Only a few days before this book came into my hands, a geology student from Grand Rapids had visited my bookstore and found a few useful textbooks on her subject. What I wished I’d had for her, though, were some of the books on geology that, for me, stimulate relish and speak directly to the fascination so many of us find in rocks and landforms:

Lopez, Barry. Home Ground: A Guide to the American Landscape (2006)

All these books deal with material all too often presented in dry textbook style for people originally drawn to the subject, drawn outdoors, and drawn to pick up rocks and climb mountains by beauty and mystery, while these books are definitely to be read for and with pleasure.

Note: This post could be taken as an extension of the previous post on reading subjectively. So, not a critic and not a quantum physicist!

Oh, yes, how dry some books seem, but I’m intrigued to read F.J. Pettijohn’s Memoirs of an Unrepentant Field Geologist. He would seem to have a sense of humor, certainly a sense of optimism. As you wrote: “ for me, stimulate relish and speak directly to the fascination so many of us find in rocks and landforms.” Who would’ve thought - geology! Although, many years ago in El Paso, Texas, the rocks, plants and rocky mountains were so beautiful and different from the north!

The Pettijohn book is indeed a treasure, Jeanie. He worked summers for the U.S. Geological Survey in northern Minnesota, back when geology was (as he notes) a field science, not a laboratory science. Nowadays, apparently, geologists spend hours in front of computer screens like everyone else. Ironic! When the love of rocks and the OUTDOORS called them to the field in the first place!


What a thinker you are, Pamela Grath! I love reading books in the mystery/thriller genre for pleasure. But as a writer of such books, I learn so much from them: how to unfold a mystery plot, procedures the police use in catching criminals, how to plant red herrings to throw the reader off, forensics used in crime solving, and more. Thanks for your great blog.

You are very welcome, and thanks for that comment, Karen. It reminds me that I too have learned a lot about many different subjects from reading murder mysteries. Good point!

I have read for many years for the escape it brings me. Being in the world of the tiny Borrowers, imagining the smell of cheese in Brother Bertram and recently being tiny Violet the mouse who has new adventures while learning to live in the wild. My reading recently is also to learn about other cultures and some of the many challenges others have which often make mine seem rather small in comparison. And of course I love to read a good recipe!

Deborah, you are a very eclectic reader, and I thank you (once again, because I keep forgetting!) for the reminder about THE GENTLE MARTYRDOM OF BROTHER BERTRAM.