Is a shadow the opposite of a reflection? Can reflections bring on shadows? Can a shadow generate a reflection? Think of these questions as pertaining to metaphors, rather than inquiries into the physics of light. And yet, there are memories that bring light, just as there are those that cast shadows.

When a bookstore customer on Saturday bought Grief’s Country, by Gail Griffin, I wondered if the book had special meaning for her. (The meaning I found in it appears in this post.) With an untroubled smile, at least as I read her face, she said she had read a bit of it and found the language poetic, and it was that which appealed to her. Grief’s Country is memoir, but Griffin is a poet, also, and has a new book of poetry due out in spring of 2023, which I look forward to with a sense of confident anticipation. For me, though, the memoir was essential reading, and not for its language alone.

Since grief-stricken myself early in the present year, I have, with little or no effort on my part, received confidences from others struggling with grief, and their reflections on the subject bear witness once again to the truth that we all experience the loss of loved ones differently. It isn’t surprising that losing a child or losing a partner suddenly and unexpectedly with no opportunity for goodbys, would be excruciating. “You never get over it,” one man who lost his son eight years before told me. “It’s always with you,” said another mourner. Then there was: “I couldn’t say his name for two years.”

Reflect on other people’s experiences as long as we might, however, there is no having of any experience besides our own, no comparing ours to anyone else’s to say which is "worse," the unexpected or the anticipated, drawn-out suffering or a quick, painless death. As another author put it (in the book Widowland, which I wrote about in this earlier post), grief isn’t a contest -- and if it were, who would want to win?

Everyone’s personal experience -- the only experience any of us ever has -- is absolute.

I’ve written about this before, but the biggest surprise to me, even when my grief was as fresh and overwhelming as an avalanche, was how much gratitude I felt in the very midst it. I was grateful for all the years I had had with my love, for the happiness we had known and never taken for granted (having lost it for a while and thinking then that we had lost it forever), for his success as an artist and for all the ways we had been able to work side by side – hanging paintings, transporting boxes of books, backing vehicles onto trailers, consoling each other for the loss of beloved friends and pets, and just everything else that life in a partnership brought, events both memorable and mundane. Grateful for the wonderful travels we had taken together, within Michigan, to the Far West, down to Florida, up into Canada, and – thank heaven we made that dream come true! – to France. Immensely grateful for the support of friends and family, for all the love that came my way when he died, which felt like a harvest of all the years of attention my love had paid to others, making them feel seen, as he did me.

Something else for which I am grateful, something I haven’t written about here before, is the opportunity I have had – so many opportunities! – to speak of and write of the Artist since he has been gone. If I had not been able to talk about him, to remember and write about our life together, to hear other people’s stories of him, I don’t know how I would have gotten through the past months at all. One first-time bookstore customer over the summer, who lost his wife the same month my husband died, wrote to tell me that our conversation made his time in Leelanau “a little easier.” If I can make use of my own grief to help others with theirs, the pain of it is somewhat lessened.

Waking in the morning is the hardest time of the day for me, and only the presence of the puppy makes it bearable. “I’m glad you’re here,” I tell Sunny Juliet, and her wiggles and kisses make me laugh, pulling me out of dark doldrums. I don’t want the light of my reflected memories to fade, but the fading of shadows I don’t mind.

Life without the Artist’s physical presence – his smile, his laugh, our far-reaching conversations and frequent shared silliness, the way we would point out things in the landscape to each other and share thoughts and ideas – can never be what it was with him. Beautiful fall colors in the rain are as lovely as ever but don’t touch me as deeply. Rather, they bring memories of all the autumns we shared, and so, myriad reminders of loss. Someone I happened to see by chance the other day said he wished he had spent more time with David. “Yes,” I responded, “life with him sparkled.”

The world is still beautiful, though, and life is a gift. As I said to a geographically distant, emotionally close friend on the phone just last night, though life doesn’t sparkle for me these days, sometimes for a moment the sun comes out from behind the clouds, and the world glows. 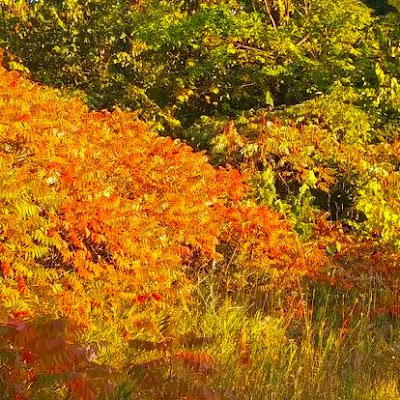 Matthew, thank you for your thoughtful and personal perspective. I am so, so glad that you had those conversations with your father! My son (your cousin) also said his conversations with his father near Bill's end of life meant the world to him. With my own parents, I am mostly thankful that both of them were able to stay at home until they died -- my father because my mother took care of him, my mother because, except that she had to give up driving, she was able to be independent to the end. My father had his physical complaints, but those were nothing like what your dad and Ian's dad suffered, and my mother was fine one day and just didn't wake up the next.

Fall does feel like a winding down, doesn't it? Spring also brings back for me memories of years past, but mainly it reminds me of being young. It is a young season. Fall, on the other hand, is nature's aging toward sleep. Perchance to dream? Maybe not. who knows?

So lovely! In words and pictures both.