The World of Men and Women

The classic Scottish novel, Sunset Song, by Lewis Grassic Gibbon, is one I had never heard of before, so if I’d gone into a bookstore asking for some specific book, it wouldn’t have been this one, and if whatever book I’d asked for wasn’t in stock and I’d left without a serious browsing session, serendipity wouldn’t have had a chance. But as chance determines the large majority of books I read, good fortune had it that this one came into my hands. The cover was attractive. It was called on that cover “The Scottish Masterpiece.” The introduction by Nicola Sturgeon left me no alternative but to turn another page and begin to read the novel.

The story begins in 1911, with a prelude that introduces us to the fictional farming hamlet of Kinraddie and all its folk, a small place of nine households with land leased to farmers carved out of a larger estate. Not on a railroad line or very near a large town, its red clay soil not the easiest to farm, Kinraddie, surrounded by woods and guarded by the nearby Grampian Mountains, has honeysuckle and rabbits and birds, and its fields are worked with teams of horses, wagons of grain then taken to the local mill. The outside world seems so far away it might be on another planet.

Young Chris Guthrie is the novel’s central character. The Guthrie family, John and Jean and their six children, leave the country up by Aberdeen when John loses the lease on his land due to an outbreak of temper against a member of “the gentry,” and the family comes to Blawearie in Kinraddie. Between John and Will, his eldest, whom he drives like a beast, there is no love lost. The girl Chris, Will’s sister (quean is the old Scottish word for girl, used throughout the novel, as a “full-grown, responsible male” is called a childe), discovers the world of books at school and for a while has ambitions to become a teacher and escape Kinraddie, but her dreamy side is also captured by her surroundings, the fields and woods and neighbors and the old standing stones, so that she feels herself two different people.

Though her mother's own life hardly seems enviable, Jean tells the girl there is more to life than books. The life the mother loved and misses, however, was the brief period of freedom between childhood and motherhood – “the countryside your own, you its, in the days when you’re neither bairn nor woman.” And so Chris Guthrie finds it, after first her mother dies and then her father and she hires a woman to do the indoor work while she herself works in the fields.

Then one New Year’s Eve she becomes Chris Tavendale, wife of Ewan.

So that was her marriage, not like waking from a dream was marrying, but like going into one, rather, she wasn’t sure, not for days, what things they had dreamt and what actually done—she and this farmer of Blawearie who could stir of a morning at the jangle of the clock and creep from bed, the great cat, and be down the stairs to light the fire and put on the kettle. She’d never be far behind him, though, she loved even the bitterness of those frozen mornings, and a bitter winter it was, every crack and joint of the old house played a spray of cold wind across the rooms. He’d be gone to the byre and stable as she came down and sought out the porridge meal and put it to boil, Blawearie’s own meal, fine rounded stuff that Ewan so liked. She’d leave it to hotter there on the fire and then bring the pails from the dairy and open the kitchen door on the close and gasp in the bite of the wind, seeing a grey world on the edge of morning, the bare stubble of the ley riding quick on the close, peering between the shapes of the stacks, the lights of the lanterns shining in byre and stable and barn as Ewan feeded and mucked and tended horses and kye.

Contented and even joyous these two were, working side by side and making love besides.

The times, however, as always, bring change. More and more machines appear, on the roads and in the fields. The “Great War” comes, at first something far away that barely seems to concern Kinraddie, but then pushing and pulling on even their quiet rural lives and drawing men away to be killed in faraway France. Rumors of war atrocities and urgings to patriotism pit neighbor against neighbor. Even the appearance of the countryside changes, as to feed the war and the machines the woods are all cut down. New trees will be planted, but no one alive in the second decade of the twentieth century will live to see those trees as a two-hundred-year-old mature forest.

Alongside changes, though, some things stay the same, and one of the abiding facts of life is that lovemaking leads to babies. John Guthrie had ever loved his quean’s golden hair, and Ewan and Chris loved each other bodies, too, but without any means of contraception other than abstinence, men’s and women’s choices put them between a rock and a hard place – “nothing but a wife you hardly dared touch in case you put her in the family way….” And so Jean Guthrie ends her own life and that her of last-born, the twins, with poison … and John Guthrie is tempted by the body of his own daughter … and Ewan Tavendale, home on leave from the army and become a coarse stranger to Chris, tells her he might better have stayed in town and spent the night with a “tart.” Some of his anger and hatred came from the war, yes, but between Chris and Ewan also came the hardship of abstinence. It was not to abstain that they had married, after all!

Not work in the house or in the fields it was that starved these couples of love but the impossibility of limiting their families. This is not at all a “theme” of the novel or one of its overriding “messages,” so it’s nothing a literary critic would point out, but as a reader in 2022 when reproductive rights are being seriously challenged in the United States, as elsewhere, I see the tragedy of these couples’ lives standing out sharp and clear.

Men and women. The marriage bond. Children can strengthen the bond, if children are desired. Children can also drive apart two people brought together by desire if those children come too fast or too many or before the lovers are ready for them or after they feel their family is complete.

Both couples in this novel came together in love and began married life in love, but the facts of life conspired to make enemies of them. Alternatives were not available to them in the early twentieth century. Are we now to make alternatives once again unavailable and once again turn too many marriages to battlegrounds? My own happy life with the Artist would never have survived six children!

Of course there is much more to the novel than pregnancy vs. abstinence. There are the charming place names, Peesie’s Knapp one of my favorites. There are the eccentric locals, from the “dafties” that board with Mistress Munro to the philandering minister of the kirk to the atheist and pacifist, Rob of the Mill. And there is the countryside itself, the beauty of the land that Ewan and Chris both so love.

So she went down to the shore, the tide was out, thundering among the rocks, not a soul on the beach but herself, gulls flying and crying, the sun strong and warm. She sat on a seat in the glow of it and shut her eyes and was happy. Below her feet the ground drummed and tremled with reverberations from that far-off siege of the rocks that the sea was making out there by the point of the bay, it was strange to feel it and be of it, maybe folk there were who felt for the sea as last night she had felt in the rain-drenched fields of Kinraddie. But to her it seemed restless, awaiting and abiding nowither, not fine like the glens that nestled and listened high up in the coarse country, or the parks sun-heavy with clover that awaited your feet at evening.

Chance. Happenstance. Serendipity. My reading comes as much by these means as any others, and I am glad of it. 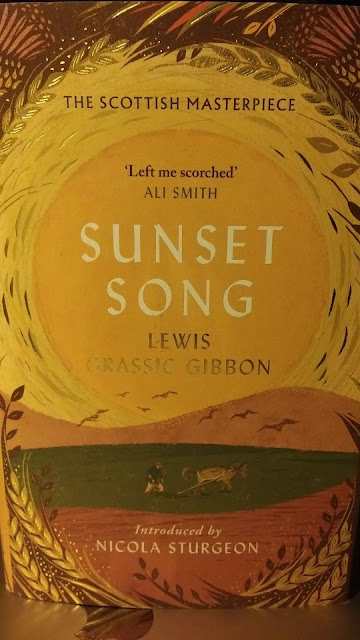 Letting the book find me (rather than letting me find the book) is my favorite way to spend time in a bookstore. I admit, though, that this book sounds like one I may enjoy, so I will keep my eye out for it now. I enjoyed the post! --Shelly