To say that Peasy is happy in his morning adventures with our neighborhood desert dog pack (me, Therese, Peasy, Molly, Buddy) would be understating the case. He is delirious! He is also a supremely calm and contented animal when his dog parents invite him up on the bed for a little pack time before we all go to sleep (dog on the floor). He has a good life, that little sweet Pea! He loves having a family! Staff at the Graham County animal control pound would doubtless be amazed to see this “unadoptable” dog still alive and thriving.

It must have been confusing and unbelievable to him at first here in Dos Cabezas, after being in "prison" for so long and, before that, a homeless stray. Then, a few months after getting used to our winter desert cabin came a week of cross-country car travel to another strange new home in Michigan, where he spent long days home alone while his dog folks worked to bring home his dinner (and theirs). And just when he’s settled in there, back across the country again to Arizona! I wonder if the little guy  half-expected to be abandoned along the road (again) any day. We never considered abandonment, but there were certainly times in the past year when his future with us hung in the balance….

How is he here and now? We have not seen his Mr. Hyde personality for quite a while now. (Maybe his anti-anxiety meds are starting to kick in. Maybe, too, time has been working its slow magic in what is now almost a year since he came to be our dog, even if it was two steps forward and one step back for what seemed forever.) Clearly, he remembered the cabin, and he certainly remembered our neighbor, Therese, and her dogs, greeting all three with trust and enthusiasm and readiness for fun! The only other neighbor he met last year was Cheryl, and I'm pretty sure he remembered her, too, because when she drove up to the cabin, he didn’t bark. A very big deal! He also let her come inside and took treats from her hand -- a little nervously, but immediately and without the slightest hostility – and when he had had enough treats (all she’d brought!), and I told him to lie down on his rug and stay, he did it! Good dog!

(He is on-leash in the above photo because we were out before sunrise so I could get to a social gathering in town, i.e., Willcox, by 8 a.m.)

We don’t have outdoor pack fun every single morning but it happens many mornings, and Peasy and Molly have learned to look for each other. Molly is definitely boss dog. When she doesn’t want to be messed with, she makes it known. I wouldn’t mess with her, would you? Anyway, I think it’s good for little Pea to play second fiddle to Molly, too. Keeps him toeing the mark. 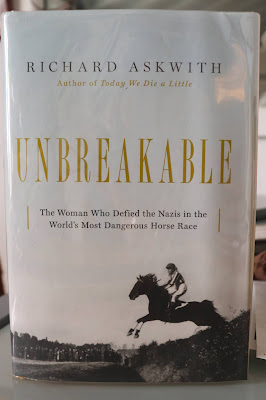 Unbreakable, by Richard Askwith, is the story of a Czechoslovakian countess but decidedly not – at all! – a tale of extreme riches, international travel and intrigue, flamboyant affairs, or social status games. Lata Brandisová’s family was pretty much on the bottom rung of the nobility and, for nobility (and unlike their wealthier relatives), lived a fairly simple farm life. Lata did grow up with horses, however, and that was the making of her.

Steeplechase is probably horse racing’s most brutally dangerous form, for humans and horses alike, and the Velka Pardubická quickly became famous, right from the first, as the world’s most brutally dangerous steeplechase, intentionally designed to be so by hell-raising Count Oktavian Kinský, Lata’s great-uncle. Small wonder that women were barred from competition until Lata Brandisová broke that barrier. On her first attempt, she managed to complete the course – in itself, a triumph in a race that ended many lives, human and equine, over the years. One year not a single horse and rider finished. Falls, pile-ups, broken necks were an expected part of every annual event.

The story of Lata Brandisová involves politics almost as much as horses, and her 1937 win of the Velka Pardubická, following a year in which German Nazi officers swept the top places, made the formerly unwelcome and at first publicly ridiculed female jockey, briefly, a national heroine of Czechoslovakia. Friend of neither her country’s Nazi occupiers, however, nor their successors, the Russian Communist regime, Lata found her fame short-lived. For that one day, everyone in her country had loved her, but soon she was an “enemy of the people,” too dangerous to befriend closely.

The thing about Lata, though, as her biographer describes her, is that while she loved freedom and hated injustice, nothing was more important to her than God and horses.

Anyone interested in how the succession of shifting 20th-century political regimes affected life in rural central Europe find these aspects of Lata's story fascinating. Readers who love horses will be on the edges of their seats, as one exciting race after another is told. Feminists will find a new and inspiring model in this intrepid horsewoman. I loved the book for all these reasons and only hope that the author’s attempt to bring Lata Brandisová out of obscurity with this biography will be successful.

Because life is not all about dogs. It’s about horses, too. And commitment. And staying the course.

Askwith, Richard. Unbreakable: The Woman Who Defied the Nazis in the World's Most Dangerous Horse Race. NY: Pegasus Books, 2019.

Lady Lata! Ooooo, I must read about her! Quite a woman, and your photos of the horses just bring her story alive! HaHa - yes, dogs and horses…teaching humans patience and wisdom, well, if we listen closely.

Jeanie, you get it! And like all good teachers, they give us joy, too.

I love your Peasy stories! He’s making such progress, thanks to your hard work and understanding. Maybe he’s ready for his own blog. 😬

Hi, Karen. Nice to hear from you, and I hope your life away from Northport goes well? Glad you like Peasy tales. He has certainly become the star of THIS blog! He has a large fan base, though only a handful of people have actually met him!

My life in TC is good, and thank you. Still very connected to NP through Trinity, however. I just saw on the NWS website that Ellen Airgood is coming in March. How exciting!