Peasy Tales: From Sarah to Peasy 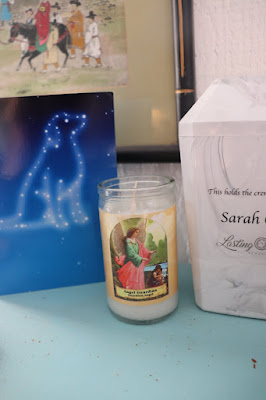 A friend sent me the link to an article on pet loss – and even as I type that phrase, “pet loss,” it seems wrong, the words trivial and inadequate to express an experience more properly called heartbreak, as the article describes so well.

I’ve reached the stage now, though, where I can talk about Sarah and her death and her absence to old customers who visit the bookstore. I see some of them looking for her bed under the table by the window, and I see their hesitation. They’re afraid to ask. It’s all right. I can talk about her. But when I read this article, I cried once again. There will never be another Sarah. Sometimes, I admit, I think that even as I watch little Peasy bounding joyfully ahead of me on our morning walk-run.

Some people who have lost a beloved dog say they’ll never have another because they don’t want to – can’t -- go through the losing again. I understand what they’re saying. We all grieve and recover differently, whatever the nature of the loss. The Artist and I had each other after we lost Sarah -- but still, I just could not stand not having a dog.

Sarah had been a focus for the two of us outside ourselves, the third member of the pack when we were on the road, and my constant companion in the bookstore, as well as on outdoor explorations and rambles. My winter ghost town hiking partner and neighbor continued to invite me to join her with her two dogs, but without a dog of my own I felt incomplete, a kind of walking-wounded ghost myself.

So the Artist and I began the search, hampered because what we really wanted was another Sarah: female Aussie-border mix with big, soulful brown eyes, soft, floppy ears, and a beautiful plume of a tail. Maybe something smaller…. It didn’t matter, anyway, because “our” next dog was never waiting for us in the shelters we visited, and we couldn’t afford to go traveling the country in search of a purebred Aussie.

Well, you know how the story turned out, so I’ll cut to the chase. You know (and if you don’t, you can revisit it here and here and and on and on) how I took a chance on the dog no one wanted, the skittish little boy we thought was a girl, a skinny, wild thing with only a stub where his tail should be. You might remember that it wasn’t love at first sight but that I did grow to love the little guy, despite his “issues” and the challenge of getting him through and past his fears and defensive responses. 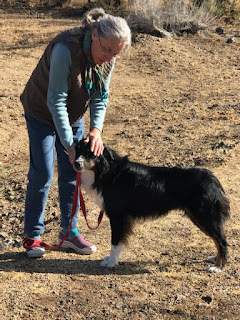 Early on, our outdoor rambles with Therese and Buddy and Molly were a great success. Another hurdle was the cross-country car trip back to Michigan, something the Artist and I had both dreaded, fearing the worst from our special-needs dog, but he was as good a traveler as Sarah had been. 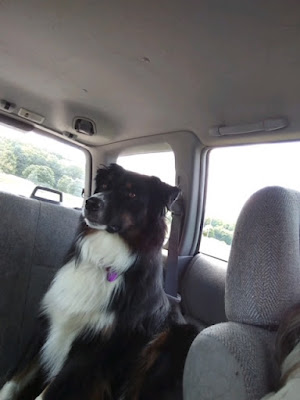 His issues remain, however, and we have to make special arrangements when out-of-town guests are expected. Sarah loved the whole world and always welcomed company. Not Peasy. He was and remains wary and nervous with strangers, apparently as concerned for our safety as for his own. He is going to need a lot more practice to develop anything that could be called “social skills” with human beings outside his own family.

But he loves having a family and a home, and when the three of us come together again after the end of a human work day away from home, he nearly turns himself inside-out with happiness, dancing around us and emitting tiny little yippy moans of ecstasy. We have grown accustomed to his little ears, his amber eyes, and his goofy little stub of a tail. As I say, he has established himself in the winter ghost town neighborhood pack, too, and proved himself like Sarah in being a dog for all seasons. 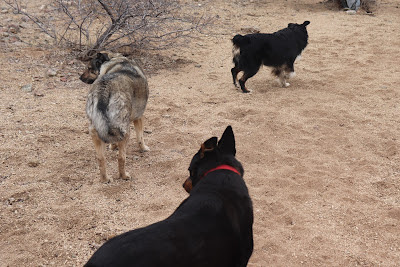 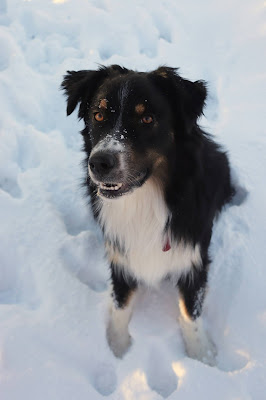 Peasy is not a replacement for Sarah, and no dog could ever replace her. She was the dog of a lifetime, for both the Artist and for me. But little Pea and the Artist are finally bonding (it took them a while to begin, long after Pea and I had fallen in love with each other), so that coming-together at the end of the human workday is joyful for all three of us.

And while what my friend Helene said of people, that “No one replaces anyone else,” is true of dogs, also, it came to me the other day that a large part of my comfort and happiness with Peasy comes from the fact that he has displaced not Sarah but the pain left by Sarah’s death. There has been no empty time to drag around and sob over the dog no longer with me since needy little Pea came into my life.

Yes, he needed me. He needed a family and a home, no one else wanted him, and without me it’s likely he would still be in prison, if alive at all.

But I needed him, too. I needed a dog that needed attention and training and love and exercise, a little being I could bring out of the darkness and into the light so that we could explore the big bright world together. He was my dog when I adopted him, the Artist emphasized. The Artist could have lived “dog-free” without our practically perfect girl and would certainly not have voted to take on a “dog with issues.”  Even I have had periods of hopelessness when Peasy backslides and shows one of us his Mr. Hyde face -- which happens less and less frequently as time goes by, thank heaven! So, all in all, it was months before the Artist said, in a tone that managed to combine affection and resignation, “Peasy, I guess you’re our dog now.”

We have challenges yet to overcome with this guy, but he has definitely won a place in our hearts. It isn’t Sarah’s place. It’s his own place. 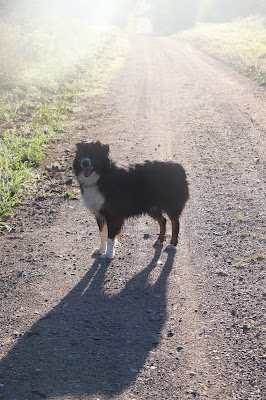 Kind of crying now. A combination of sad and happy tears. I'm so glad you found him and took the risk. I'm glad he has his own place.

I will read the article when I can, and share with Pat and Hadley. We lost Chloe on July 31 and are still reeling. I appreciate this post more than I can say.

Thanks, Dawn. I know you understand. -- And Dorene, I am SO sorry to hear about dear Chloe! I have some idea how much she meant to you. And I still remember that she inherited one of Sarah's special scarves.... So hard to lose them, but how infinitely much they contribute to our lives!!!

A loving tribute to both dogs. No person replaces another and no dog replaces another, but what you wrote is so very true, that the hole can be filled, the grief assuaged, and new joy grows up.

And now that I know some of your family history with poodles, Ruminating, I'll be interested to learn more someday. Thanks for reading and commenting. Et bon hiver!