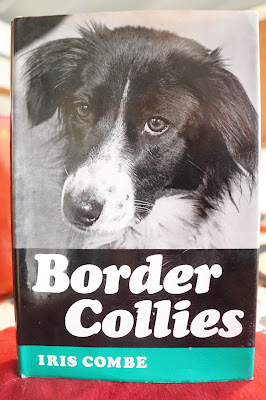 At an earlier time in history in the British Isles,

...[D]rover’s dogs and many farm dogs were referred to as ‘curs’ by reason of having their tails cut off or ‘curtailed.’ The tail docking ceased but the name remained until the beginning of this [20th] century. At one time [in England] all dogs were liable to a tax, but a shepherd’s dog was exempt if it had its tail docked, and should these dogs trespass en route or in the course of their normal duties as sheep or farm dogs the distinctive mark of the docked tail would save them from the wrath of the gamekeeper, as it was believed that docking slowed down their agility when chasing or killing game. However, this tax failed in its purpose and was abolished…. A new tax on dogs was introduced in 1796 … revised in 1878, and again the shepherd’s dog became exempt.

Isn’t that an interesting bit of historic lore? It really puts to rest all the specious reasons given for docking tails in modern times, explanations shown up by this historic note as nothing but after-the-fact rationalizations for doing something that was done for a very specific financial purpose at one time in English history. You can still read, online and elsewhere that the tail of, for example, an Australian shepherd is at risk in the field and that docking is done to avoid injury. Ha! Why wouldn’t the tails of all dogs be at risk in the field? It never made sense to me.

I am reminded of a story. There was once a housewife who always cut off the end of the ham before she put it in the oven. When her husband asked the reason, she said her mother had always done it. Finally she asked her mother for the reason. “Oh, my roasting pan was too small for a big ham,” the mother replied.

With a bigger roasting pan, the end of the ham need not be cut off.

Without the general dog tax and exemption for farm dogs, there is no reason to dock dogs’ tails.

Tail docking and ear cropping has been illegal in England and Wales since 2007. In the U.S., anyway, the AKA breed standard for the border collie includes a moderately long tail, set low and sweeping upward at the end; the standard for the Australian shepherd, on the other hand, is for a tail “straight, docked or naturally bobbed, not to exceed four inches in length.”

Aussie: short or no tail

Both are working breeds, so why the tail distinction today between the two? Despite the old tax, it seems peculiar that any dog bred and used for farm work and driving livestock and geese would have its tail bobbed if indeed the tail were as important to the dog’s work as Iris Combe clearly considered it.

This [the tail] constitutes the extra braking and balancing power of a collie moving and stopping at speed.  … Shepherds often remark that the brains are in the tail.

Our Sarah, though I always thought of her as more Aussie, was a mix of Aussie and border collie and had what filled out to become, as she grew from puppyhood to maturity, a beautiful plumy tail. I was always glad that her tail had not been docked when she was a puppy. My sympathy is all with English law on this matter. 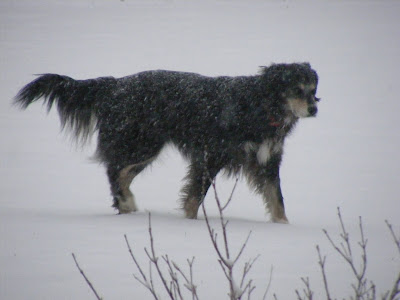 Peasy does not have much of a tail at all, but he may not have suffered having his tail docked. A naturally bobbed tail is less common in border collies than in Aussies, but sometimes there is a DNA variant in one of the genes, and that could have been the case with Peasy. Then, if he is a border collie – or more border than Aussie -- since border collies are supposed to have tails, and since breeding two dogs with the variant can be lethal to puppies in utero, little Peasy’s short, stumpy tail would have made him less desirable. 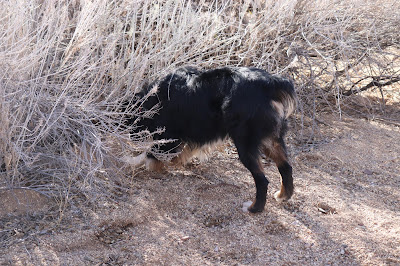 Do naturally bobtailed dogs or dogs with docked tails do less well in agility? Are they at a disadvantage when working with stock? I’ve read opinions both ways on that question. One disadvantage of tailless dogs that does seems probable, though, is the part that dogs’ tails play in doggie social signaling. Both Iris Combe and Temple Grandin make this point.

Back to the question of why breeders want to see tails in one working breed and not in another, we have to remember that “purebred” show dogs, outside of the world of livestock, are a very modern concern. At one time, every sheep-raising region in Great Britain bred its own regional strain of sheepdog. ‘Sheepdog,’ a generic term, needs no explanation, but what about ‘collie’? Here is another gem from Iris Combe:

The old Gaelic rural term for anything useful is ‘collie’ and for anything black is ‘coly.’ I refer here to the sort of Gaelic dialect as spoken among farming folk, not the true Gaelic language as found in textbooks. … So a collie dog was a useful farm dog, and in Scotland the names of many farm utensils are prefixed by the word ‘collie.’ 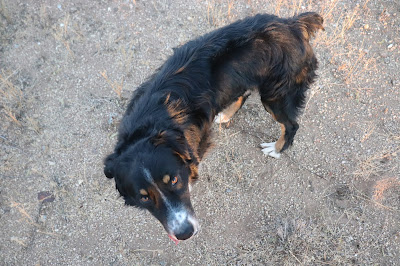 Border collies are said to be wary and reserved with strangers. Peasy is certainly wary and reserved, to put it mildly, when meeting new people for the first time -- which has only happened twice so far in these strange COVID times -- and that could be another reason he was in the county facility for so long. I thought it could take days or even weeks before he would trust us. But, surprise! Peasy took to having a family the way a duck takes to water! He is inordinately cuddly, extremely affectionate, and could hardly be more eager to please. He is getting the hang of basic commands and has learned to “Wait!” for permission before going through an open door or diving into his dinner.

It is a big responsibility, adopting and raising any dog, but especially one of the herding breeds, and Peasy is much more of a challenge than our laid-back Sarah was. Here are parting words of advice from Iris Combe:

…Your puppy was born with a certain personality which he will possess all his life, but the formation of his general character will, through training and association with you, reflect some of your personality as well. It is very true to say that some dogs are like their owners; see to it that this is a compliment in your own case. The choice and opportunity lie with you. 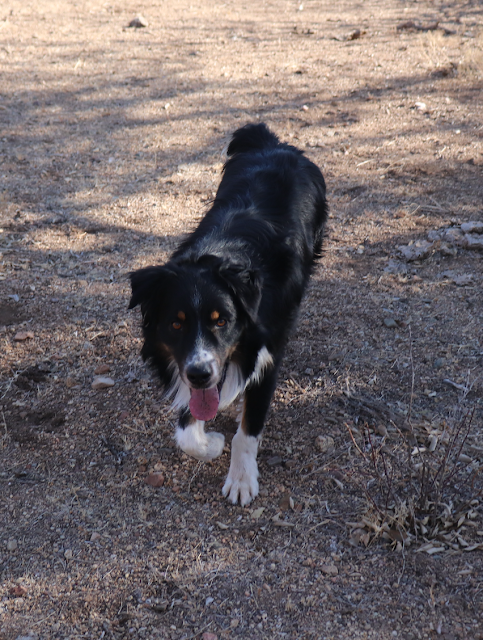 Oh girl, he is a beauty!!! And I'm so happy that you honored what you could---more so what you could NOT live with---no dog. :D It makes my heart smile that you gave this little beautiful boy a forever home. May your holidays be full of joy and light.

Katie was extremely shy when we got her and it took years of work, taking her lots of places, going on lots of adventures before she shed that. Now days she walks up to anyone, hoping for a treat. Silly girl. Peasy might get used to people in time. He seems very happy to have you two. And that is probably enough for him to process for now.

He is a cute little guy, isn't he, Angie? Thanks for being happy about our new family member. He has certainly made my holidays brighter than they would have been without a dog in the house. Dawn, I am encouraged by what you tell me of Katie's younger days. Socializing opportunities are hard to come by these COVID days, but I do hope Peasy will learn to relax when he meets new people, because I know people who see him will want to become acquainted. And yes, for the moment we are making progress fast enough.

The Tail Tale got me to looking up photos of Aussies, Borders and their mixes. Quite surprising how both breeds seem to come in various
colors and so many of the Aussies have blue eyes. The commonality seems to be intelligence, energy and loyalty. After looking at dozens of the Aussie/Border photos I could find none that looked like
Peasy..or Sarah. Yet those two looked like family. Not a carbon copy, but what a find! I'm thinking young Pecos Peasy will find Michigan a new world of discovery..maybe even develop a taste for
those Yooper Pasties while doing finishing school for bookstore
greeters.

Pecos Peasy! I love it! When I told my son what we were looking for in a dog -- Aussie or Aussie/border mix; female; with a tail; predominantly black; no blue eyes -- he said, "Boy, you have a lot of requirements!" As it turned out, we got a little bobtailed boy. But he doesn't have blue eyes.

I had a book on Aussies at my bookstore for a while that showed a litter of puppies, with one that looked exactly like Sarah. As for Peasy, to my eyes he is the spitting image of the dog on the BORDER COLLIES book.

Who knows what his future holds? Stay tuned! And happy new year!!!