I don’t finish every book I start.


I don’t finish every book I start. Life is too short. Or, you might say I am too curious and can’t help opening and reading in part books that I will not stay with long enough to finish.

Have you heard of the rule of 50? According to that rule (if one chooses to follow it, and it is not, after all, a law), you must read at least the first 50 pages before bailing out of a book – until you reach age 50! Then, after your 50th birthday, however, you get to subtract one page for every year over 50 you are, so that at age 70, then, you only need to read the first 30 pages. It makes sense that a reader should get a break with increasing age, as the remainder of life, i.e., time to read, diminishes every year, but I’m afraid I don’t hold myself to the rule. Recently I bailed on a book because the aimless drifting-about of bored youthful characters depressed me. I don’t need happy, feel-good books all the time, but I want suffering and hardship to be met, if not with meaning and triumph, at least with character.

(When a friend recommended Vikram Seth’s novel, A Suitable Boy, my heart sank at the size of the tome. Over 1400 pages, as I recall. “Just read the first 100 pages,” she urged, “and then quit if you don’t like it.” Well, I was hooked after two pages, and reading the novel only took me a month (June), not the entire summer I had feared it would absorb.)

So I don’t follow the rule of 50 or the rule of 100 or any other rule when deciding whether or not to continue reading a particular book, though if the beginning is dull or annoying, I’m careful about going too far, because one hates to read halfway through a book before deciding against finishing it (Lost time! And not the kind that makes for wonderful memories!) and because if I don’t read the entire book, I don’t allow myself to put it on the “Books Read” lists I’ve been keeping every year since 2009.

But lists be hanged, little dips into books I don’t devour in their entirety remain irresistible! For instance, a book of essays by Jacob Bronowski called A Sense of the Future. Published after Bronowski’s death, in these essays he is envisioning the “future” from half a century ago. Concerned with what nonscientists think about science – what they think it is, how they think it’s done, and its body of accumulated knowledge – he also believed that no meaningful division could be made marking off the humanities from the sciences.

As for books I’ve read all the way through since the last few I listed, here they are for the week past:

The Story of Gabrielle and Into the World were quick reads. (Into the World was frank talk to a young girl, with farm scenes playing a part, the fiction a pretty obvious narrative thread on which to hang the facts of reproduction.) My reading of Derrick Bell’s And We Are Not Saved, on the other hand, and Christopher Hayes’s Twilight of the Elites both stretched out over several days each. Bell and Hayes lean heavily on history, but each finds in America’s past social and political cycles that put our future in question. How did we get here? Where do we want to go? And how can we – can we? -- get there? Such are the questions posed by these two nonfiction books.

After that serious nonfiction immersion, when I turned for relief to a comfort book read many times over the years, it was nonfiction again, the story of Eva Alvey Richards’s first year as a teacher in the Far, Far North, Arctic Mood that soothed my middle-of-the-night insomniac attention.

Time now, however, for me to re-read The Waves, Virginia Woolf’s novel that I read for the first time only this past July. But July! It seems so very long ago as September takes hold! 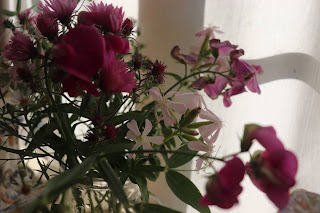 I also loved A Suitable Boy, a gift from a dear friend long ago now deceased. And I'll bet the one with the teenagers that you quit is the French one I gave you and that I quit for the same reason.

Ah-ha! Another fan of A SUITABLE BOY! And are you as frustrated as I am by Vikram Seth's failure (so far) to publish his promised sequel? Did you know he had to return his advance after his deadline had been extended several times? Some people can't get started writing, and some -- to judge from the length of the novel we both loved -- find it hard to stop, so my bet is that he has mountains of pages written on the sequel but hasn't been able to wind it up. What do you think?

Yes, I did bail out on the French novel. Despite many words I didn't know (I looked up a few), I was able to follow the action and pictures the scenes, but I found it just too depressing. I would never want to be a teen again myself, would you?

Not a teen and not twenty or thirty Perhaps starting around 40. And I didn't know about the promised sequel and want it to get published. It's been many many years. And yes, those French boys stealing a canoe to go find the topless beach the language was fun but the rest, non.