The 'Wild West' in Movies (and Books)

Out here on the range, most nights the Artist and I watch a movie before we fall asleep — or before a read-aloud session before going to sleep. Usually we stay awake until movie’s end, thus making time for reading aloud. We see more Westerns on TV and DVDs out here than we would at home in Michigan, but we don’t find all Westerns equally satisfying, and I’ve been thinking about the variety in these films over the decades.

Older Western movies fall into a couple of general categories, the formulaic and the classic. (Is it easier to see a black-and-white film as a classic? Plenty of formula movies were made in black-and-white, too, but the truth is that even those look better to our eyes than they would now if we saw the same tired story and two-dimensional characters up on the screen in full color with full, top-quality production values.) Old Westerns made on the cheap weren’t trying to be something they weren’t. The aim of the studios was to entertain and audience in order to make money. That simple. So okay, entertain me, if you can, but I’m not a 9-year-old on a Saturday afternoon, and my entertainment is often diminished by what I know about human nature and the history of my country.

Classic Westerns are something else, but what is considered an important Western film these days? “High Noon” comes immediately to my mind, but looking at a “Top 20” list surprised me:

While all the films in the list are set in the West, in Westerns as in horror or gangster films it’s easy to substitute gore for character, plot, and meaningful action. To my mind, how human beings kill (each other) and die (alone) is not that interesting, in and of itself. Notwithstanding the truth that death comes to us all, for me the killing and dying is only interesting within the context of how people live and how and why they make the choices they do.

Films from the 1990s and later look at the 19th century through 20th- and 21st-century sensibilities, with all the concomitant insights and flaws that implies. In “Dances With Wolves” a director (Kevin Costner, also the film’s star) has removed cultural blinders in his look back at the history of the American West, portraying the Native Americans in his story in their full humanity, and his story means much more to me than all the blood spilled in “The Wild Bunch.”

A recent issue of Cowboys and Indians magazine (picked up for free in the library lobby or laundromat -- I forget which -- and I'm not kidding about the name of the magazine, either) included a short list of what those who compiled it called “Top Modern Westerns.” There are only five films on this list, all of them made since we turned the millennial corner, and I have seen none of them, but “Hell of High Water” (2016) sounds like one I’d give a chance.

In any case, I have my own favorites among the more recent films set in the West, and none of them made the Top 20 list, much less the five Top Moderns. For me, “Broken Trail” is #1 — and not only for some of the best wild horse herd sequences I’ve ever seen on film. Robert Duvall and Thomas Hayden Church play down-to-earth cowboys, looking to make a buck but doing it their way and not so focused on the buck that they have put their humanity on the shelf. Another I like a lot is the almost unknown “Red Rock West,” a quirky noir Western with comic undertones that’s about as far from “Broken Trail” as a movie can be, but I like Nicholas Cage, and much of the movie is set in Willcox, Arizona, my winter stomping grounds, so I recommend it to friends for that reason alone.

And now I have another to add to that short list. 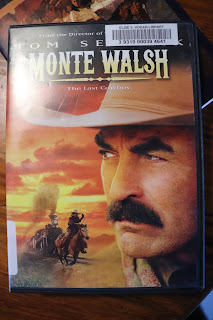 Tom Selleck’s “Monte Walsh” is not the most exciting movie, even the most exciting Western, I’ve ever seen. There are stretches where it’s almost dull and a couple of scenes played too hard for effect. But I didn’t mind the slow or overplayed sequences all that much, for the sake of the movie’s depiction of cowboy life, both its appeal and its disadvantages, particularly in an era (end of the 19th century) when everything is changing fast. The range is being fenced in, cowboy jobs fewer and harder to find. (Unemployment has never been unique to cities.) You sense that these characters are real people in the grip of real life dilemmas.

Why do they do it? How long can they hope to do it? What else can they do instead, when “cowboyin’ is all [they] know”?  I can’t remember any other Western film that set out to explore these questions in such detail. And there are exciting parts, too, and beautiful scenes.

One minor character in the film is an aged Civil War veteran. “Monte Walsh” is not the only Western to feature Civil War veterans, and it’s historical fact that many Confederates came west to start new lives after the Civil War. (Many Southerners had come west before the war, too, which is not so well known.) The sad plight of “Fightin’ Joe” — the character goes by the name of his Civil War hero rather than his own name (and there’s a lot about men’s names, their real names vs. what they’re known by) — is that he’s been reduced to “ridin’ fence,” which the movie seems to be telling us is the end of the line for a working cowboy. That piqued my interest, because in what I’ve been reading about ranch life, riding fence is just part of the work — good, honest, hard outdoor work — and in none of the memoirs and reminiscences I’ve read did anyone indicate that it was below a man’s dignity to fence and keep fences in repair. But those were ranchers’ memories, and there was apparently a vast difference between a 19th-century cowboy and a 20th-century rancher.

No, Monte and his cowboy pals are seeing their West vanish before their eyes: monied corporations, men from the East, are buying up land and fencing it in and sometimes don’t do a damn thing with it! And that poor old man ridin’ fence is all alone. He isn’t part of a working team any more, even his horse less a partner and more mere transportation to the fence line, while those other cowboys, the ones who haven’t yet lost their jobs, they’re still ropin’ and ridin’ and roundin’ up and drivin’ cattle and horses.

“Monte Walsh,” based on the book by Jack Schaefer,  was filmed in Calgary, Alberta, and while not a perfect film, it’s worth seeing. I decided not to provide any links to reviews in this post, because some of them tell you way too much. Just take a look at the movie for yourself. That’s my advice.

I haven’t read Jack Schaefer’s book and only learned of it via the movie. Anyone know Monte Walsh the book? Should I be read it? Warning: You’ll have to give a strong sell job, because I’m tempted to skip right to Jack Schaefer’s The Hearts of Horses, in which I read that the cowboy is a girl! 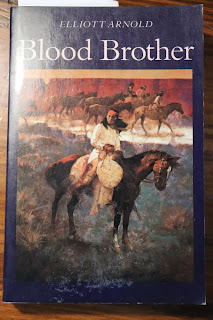 Our just-begun bedtime read-aloud book is Blood Brother, by Elliott Arnold, a fictionalized account of the friendship between Cochise and Tom Jeffords, the story made into a movie we have yet to see, “Broken Arrow.” So stay tuned, because I'll be out here for a while yet....

Since writing this post we have watched “Broken Arrow,” the movie made from Elliott Arnold’s book,Blood Brothers. I don’t know whether to recommend the movie or not. We’re not far along yet in the novel to know how far fiction departed from the account Tom Jeffords made of the meeting in the Stronghold, when he took General Howard to meet Cochise, but I’ll be disappointed if the novel veers into an irrelevant, largely invented love story, as does the movie. That, however, was the Hollywood of the time.

My biggest disappointment was the movie’s setting, as it was clear from the initial sight of the first tall saguaro and the mountain formations surrounding the desert through which Jimmy Stewart rode (though I’m happy to say he could sit a horse just fine) that we werenotin Cochise County. The screenwriter had assumed that "all exterior scenes will be photographed in the magnificent and neglected section of Arizona, in which the events occurred,” and publiity for the film promised movie-goers that the film had been "shot in the locations where the story actually took place.” Not so! Well, some of the filming took place in northern Arizona — up on the Whitewater Apache reservation — and the rest was shot in California and Utah. Why not Chiricahua? Why not the Dragoon Mountains? All mountains are not the same! Each place is unique, as is its history.

Also, White Buffalo Calf Woman -- is that the tradition that the young female love interest was supposed to represent? And isn't this a Lakota tradition, not Apache? Perhaps the legend migrated? Someone more knowledgeable will have to set me straight on this, if I've got it wrong, but the whole business of "pan-Indians," i.e., taking different peoples from different parts of the continent and creating a composite, is problematic.

On the other hand, Hollywood did a few things right with the story. They followed the lead of both the real Tom Jeffords and also author Elliott Arnold and, finally, made a Western movie that told the Indians' side of that era’s bloody cultural conflict, and it presented the Apaches as human beings with legitimate claims to the land and their way of life, rather than simply as “savages.” Also, while major characters are played by white actors, 375 Apaches were played by actual Apaches — again, I should note, according to Twentieth Century-Fox.

There’s also an interesting story about the House on Un-American Activities. That background, on script and other choices, can be found here.