Sarah looks and waits and hopes! Yes, Sarah is ready for another day of adventures. See her mooning at the back door, hoping for the appearance of cows! But alas, they are far away at present.... 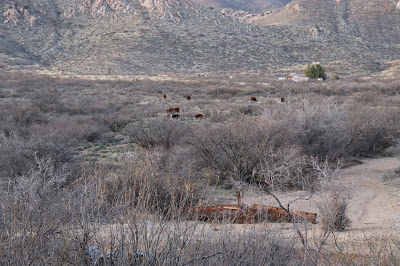 So let's do something else for a while. I will, anyway. 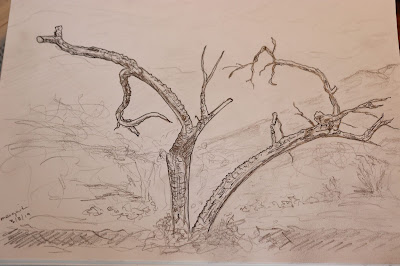 We've been homebound. I made a drawing (above) of an old dead mesquite by the end of the wash and added pen to the pencil a day or two later. If we were homebound more often, I would probably do more drawing, although, honestly, having the alternator on my car grow old and senile was not a decision we made. In any case, we had four days on a short leash, and so, time being too precious to waste, I got out my neglected pencils. There had been a couple of earlier attempts, one of them a quick sketch of Sarah on Valentine’s Day. Because she is our darling valentine every day of the year, after all. 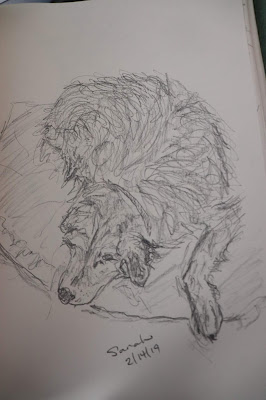 Then there was an afternoon before the car got stubborn when we took our folding chairs out to Bonita Creek for a while, but as the breeze quickly cooled, our standstill came to an abrupt end. I have not gone back to finish this drawing, but at least it’s a start. The bark of the alligator juniper, like the weathered branches of old mesquite, seem actively to invite the picking-up of drawing tools. 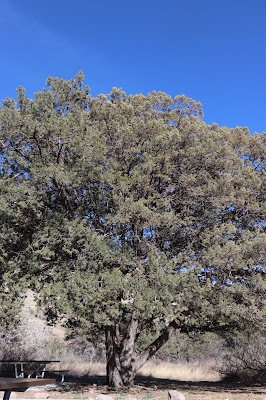 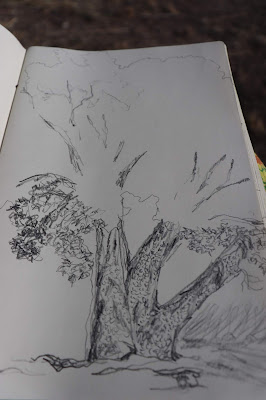 Back home. Three days in a row. So I thought I’d try something new, prompted by a friend’s comment on one of my blind profile sketches. Why not use that style for another purpose? Why not caricature? Faces in magazines are fodder for that mill, so here’s a cowboy caricature (with 'caricature' spelled wrong on the page -- my mind was elsewhere). 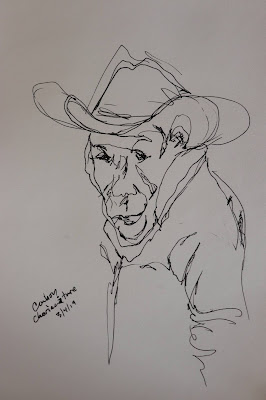 I would love to draw cows, but most of the time they refuse to hold still for even a minute. 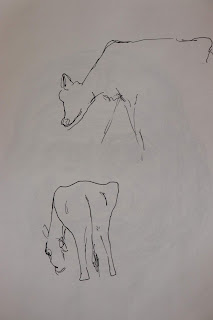 Of course, a lot of what could be drawing time is occupied with reading — and it isn’t as if I “don’t have time,” after all. I’ve been enjoying seasonal retirement since December! But while no one has more than 24 hours a day, some of spent of necessity in sleep. And then different priorities lead us to make different decisions about how to spend our waking hours, and sometimes priorities conflict.

Reading has always been important to me and probably always will be. I’ve already more than mention recent books I read by John McPhee and John C. Van Dyke. 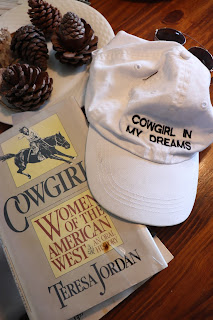 Another work of nonfiction absorbing me these days is Cowgirls: Women of the American West, an Oral History, by Teresa Jordan. Jordan interviewed and introduces “cowgirls” from many Western states, some of them ranching with husbands, some alone, others working rodeo — some having grown up on ranches and others who are transplants from the East. What they have in common is a love for working with animals, determined can-do attitudes, and strong attachment to their home ground. Cowgirls is a library book, so I’ll have to finish and return it soon. Meanwhile, I am living vicariously in each woman’s story Jordan has given me.

Halfway through now the Icelandic classic, Independent People, the book it was my New Year’s resolution to read this winter, I pick it up only at night, either before falling asleep or when I wake up in the middle of the night, but it’s definitely worthy to be considered a classic and has more than sustained my interest. I’m glad I finally got around to it. I found and purchased Independent People at the Friendly Bookstore in Willcox — not that I don’t have it back at my own bookstore in Northport, but I hadn’t brought that copy with me. It will be waiting for a spring customer, and I’ll be able to give a personal recommendation at last!

And then, on a recent visit to the library bookstore in Benson, I almost passed up a big paperback book on geology in the “FREE” box on the bench outside because it looked like a textbook, and most textbooks on geology seem written for someone other than me. I find them, as a rule, incredibly dry, full of unfamiliar technical terms, and telling me too much, too fast, too soon. They are not written in language meaningful to me. (Also, they are general rather than specific to a certain region, but that’s a general rather than a specific problem, even for me.) So the Artist and I went on inside, and each of us found treasures to carry home, as usual, but on the way out, I said, “Oh, all right!” and picked up Physical Geology, 6th edition, by Charles C. Plummer & McGeary,  am I glad I brought that home!

(The only books to be regretted are the ones you consider and do not pick up. Anything you decide you don't want, one of your friends will.)

This geology book is not written for experts or even, it seems, for those aspiring to be professionals in the field but rather for the curious nongeologist eager to learn — and that is me! There are many excellent illustrations that work with the text (usually on the same page) to clarify each point the authors make. And they follow up their verbal and illustrated points with additional helpful analogies. For instance, in a discussion of general geological principles we come to “cross-cutting relationships,” and that principle is given as follows:

The principle of cross-cutting relationships states that a disrupted pattern is older than the cause of disruption. A layer cake (the pattern) has to be baked (established) before it can be sliced (the disruption).

I’ll admit that I read the first of the two sentences in the passage quoted above three times, puzzling over it. How could a result precede a cause? Then I read the second sentence, and all became clear. Of course the pattern before the disruption comes before the disruption itself. Now I get it. Maybe I shouldn’t have needed the layer cake analogy, but it made all the difference, vastly cutting short my confusion. My mind works best with analogies, and Plummer and McGeary use good ones.

They also have true scientific minds, reminding readers that even geology, an apparently rock-solid body of knowledge, generates different views among its practitioners.

We should emphasize that the picture we have presented [of igneous processes] is not an observation but a plausible interpretation of available data.

Not in a class, I won’t be reading Physical Geology cover to cover. My more casual approach to a book like this (as to a field guide) is to turn to a section, study the illustrations and read the captions, dig into the accompanying text — and then try to relate it to what I see all around me here in Cochise County, AZ. 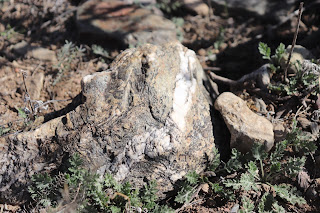 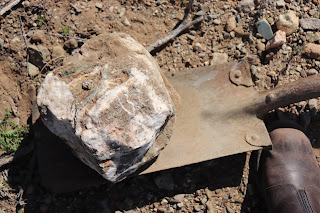 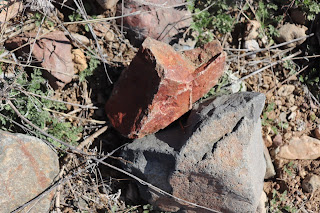 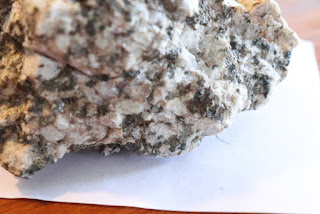 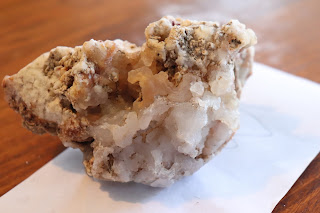 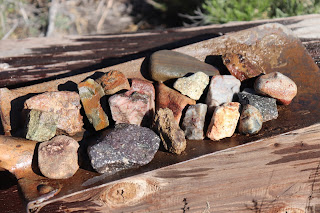 We also used our Sunday at home to move all the furniture and mop and scrub the cabin floor, then taking the scrubwater out to slosh onto the back porch to mop that down (it needed it), but how exciting can I make an account of spring cleaning, satisfying as it is on a sunny, warm day? But we always keep an eye on the cows, whenever we're at home in the cabin. 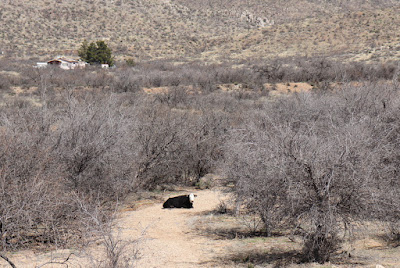 Several of them visited quite close to our back door on Monday morning, and later on it made me happy to see one cow lying in the sunshine down in the warm sand of the wash, soaking up the light and heat the same way I do — well, similar to my way: I don’t lie down in the wash. (If only it had been closer so I could have used it for a drawing subject! Finally, a cow staying in one place and one position for a while!) I rather hoped the cow would go into labor so I could call the rancher and witness a calf being born, but no such luck.

But whether it’s a nursing calf, a line of cows in a stately, single-file parade, or one old girl taking a sunbath in the wash, the cattle fascinate me, and I never get tired of watching them. In my winter world, they are a priority in and of themselves. 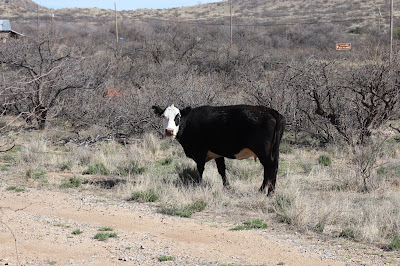 Thus each day passes too quickly, even days not filled with touring the countryside for miles around. And it was good for us to spend three consecutive days without driving anywhere. We would never have gotten our spring cleaning done otherwise! 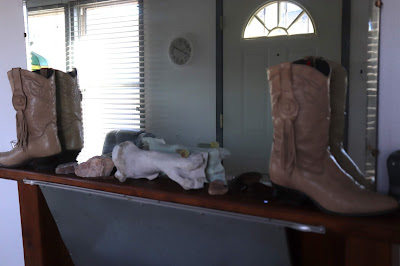 Ah Sarah, you'll be ready for an adventure after three days, right? But I'm sure you got out on walks with your folks around the cabin.

The books look good, perfect for a 3 day stay at home. And reading interspersed with cleaning sounds like a good way to be stuck at home.

PS: Your drawing is REALLY GOOD!

Hi, Dawn. Yes, Sarah is getting out every day. She has had a couple close encounters with cows and comported herself very well. No barking or bristling or other untoward behavior. Even off-leash, she just looks and then gives them a wide berth. Good dog!

Thanks for your encouraging words about the drawing. I know I would improve much more quickly if I practiced more. Not that many years ago, I was drawing every morning and feeling really good about it. It was my morning meditation. Reading does compete for the time, though, especially when I am trying to cram as much Western reading as possible into the time I have here.

Yes! Sarah is the perfect visitor, and quite unlike many dogs here in the city. But our relative’s dog who lives in the country, is exactly like Sarah: quiet and welcoming to guests, other dogs and all children. Pituca, however, doesn’t like trash trucks. Ha! I agree with Dawn - I love your drawings and all the details that you include. I’m guessing that your time in Arizona is tcking down. When do you return to Michigan?

Hi, Jeanie! We are here through April, so I am trying not to feel "time's winged chariot" too close upon me and just appreciate each day, whatever it brings -- sunshine or snow or dust storm or whatever! Yesterday was a dust storm, but this morning is sunny again.

Sarah is certainly welcoming to human visitors! She makes quite a fuss over them in fact -- loves "company" -- whereas with the cows she keeps a sage distance.

When do you come north to Brooklyn? For the spring? I know cities can be beautiful in the springtime. Chicago is always lovely when the trees along the Lake Michigan shoreline blossom and the first sailboats come out.

Always a happy moment to see you leaving a comment here! Thanks!