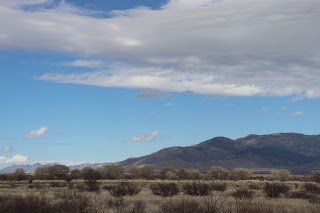 I admit it: I was impatient to get out into the world on Monday morning. According to the forecast we could expect a couple days of rain (possibly snow in the mountains), beginning Monday evening, but Monday morning the sun was giving the clouds a run for their money. So the Artist’s suggestion that we drive up to Safford via the Stockton Pass answered my longings perfectly. It is a measure of how much we both love this trip that we are willing to endure miles of banging over tar strips on Fort Grant Road until we finally reach the county line and a smoother road surface, but the magic really begins with our approach to Bonita Junction. Trees! Big trees! Running water! Below are about half of my Monday photographs taken near Bonita. Further down in this post you’ll see why I put them in two different groups. 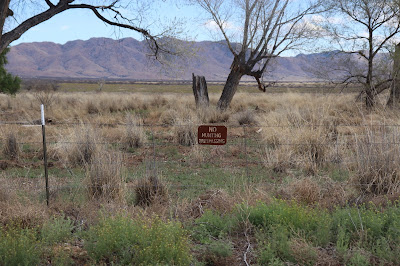 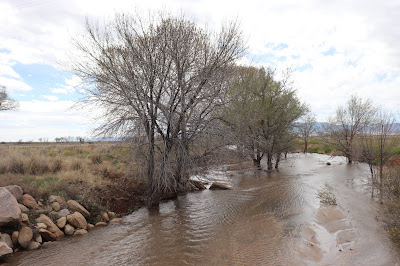 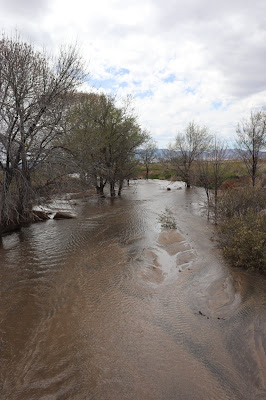 Then, the Pinaleño Mountains, which still take my breath away, as if I’d never seen them before. I think I could drive through the Stockton Pass in the Coronado National Forest every day and marvel anew at its beauty each and every time. With the Artist at the wheel, it is part of the Navigator’s job (that’s me) to peer down into all the washes and creeks and report on the presence or absence of water, and I am very conscientious about performing my duty. 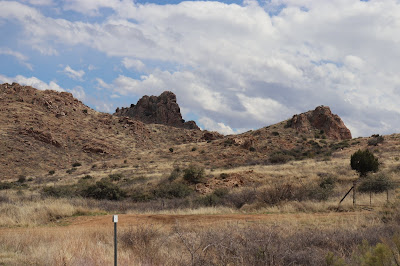 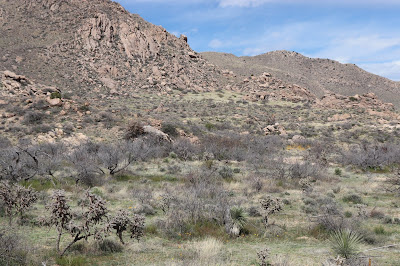 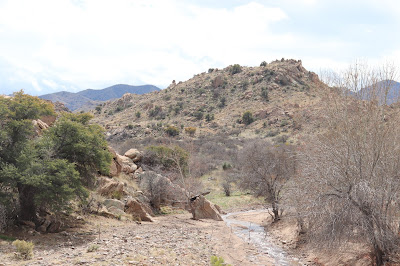 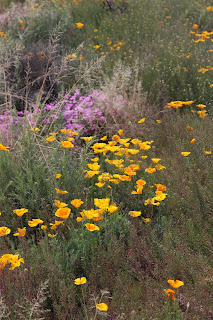 A truly new and spectacular vision, a seasonal wonder, awaited us this trip as we neared the end of the road through the pass and neared the intersection with the main north-south highway. Mexican poppies were blooming gloriously in carpets of gold, sometimes in isolated sweeps but in many other places as far as the eye could see, a dizzying, breathtaking sight, both along the last of our mountain road and up the larger highway to Safford. 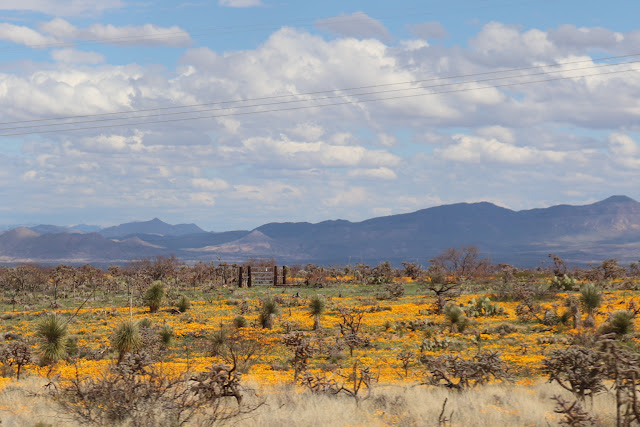 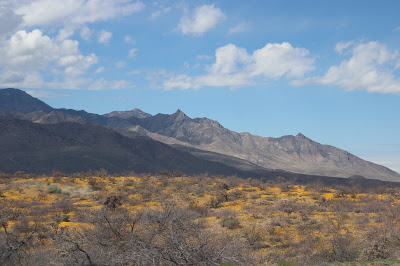 Gold was not the only floral hue to be seen, either, although this otherwise lovely moradilla (Western pink vervain) was rather outshone — and outnumbered — by its brighter, showier neighbors. 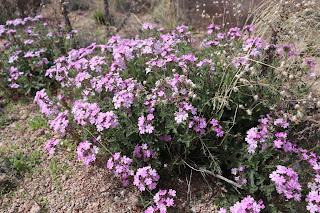 What more could a day bring, after such sights as floods both of water and of flowers? Sometimes beauty is almost exhausting! But driving that far from home means driving the same distance back again, no matter how tired you are, and while the return trip is made from Safford is easier and faster by taking 191 right to Willcox and skipping the mountains, that’s hard to do. Sometimes we do it, but not on Monday, even knowing those pesky tar strips lay ahead….

We realized that Sarah hadn’t been out of the car all day, a situation that would have to be remedied, and we had a stopping place in mind, but before we got to it another road beckoned. A road we hadn’t noticed before, a primitive road but with an open gate, clearly open in a welcoming way because a sign asked us to be diligent about drowning our campfire. No worries. We weren’t going to make a fire, only get out of the car and stretch our legs a bit, ours and Sarah’s. 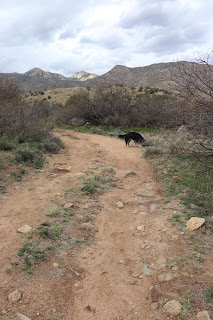 Sarah was so excited to have a chance to explore new ground that she and I wandered quite a way up the road from the car. It’s a good thing we didn’t try deploring up this primitive road with the car, and my photos of it do not begin to capture the reality. There were stretches of it where the right tire track looked a good foot deeper than the left, with a monster hump between them. Hairpin turns and switchbacks were constant. Farther in, enormous boulders protruded from and lay about in the roadway. An ATV could probably manage somehow (it would be a bone-jarring ride), and mountain bikes could do it, I suppose (again, not in any comfort), but an ordinary little car? Even with 4WD, that would be asking for ruin. Better on foot! 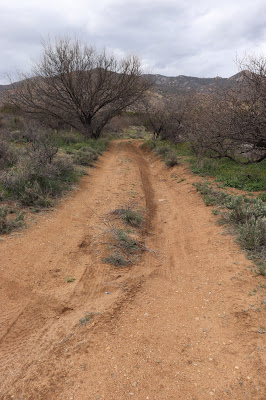 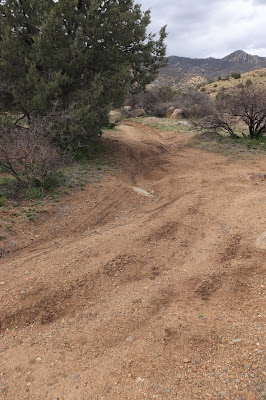 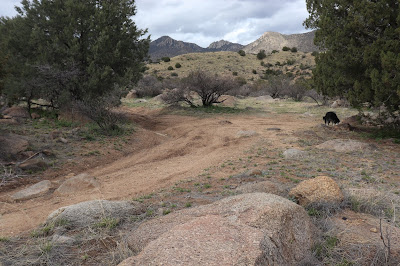 Oh, but the wildness, that delicious feeling of being somewhere remote from civilization, was just intoxicating! And not only the long and high, rocky views, because, looking down at the ground, I saw one of my favorite wildflowers of the region, the tiny, modest little bajada lupine. I do hope we can return to this area when the flowers appear, because they will be nearly carpeting the ground! (Yes, I am greedy for wildflower displays.) You may think there isn’t much to see in them this early in the season, but look closely. Do you discern the drops of dew or rain held by their leaves? Like transparent pearls! 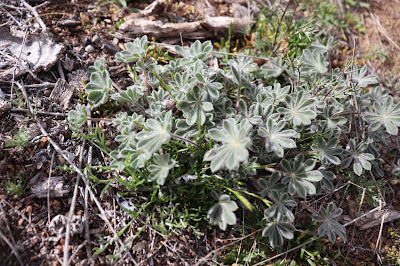 The cup of my day was overflowing so fast I could have filled three more cups with it. If we hadn’t taken the mountain road for our return trip, we might never have noticed that particular primitive road at all, so it was complete serendipity. Beyond the high point of the pass and on down, our first glimpse of the plains to come was rather a shock. Another dust storm? We hadn’t expected that — maybe rain, but not dust — and yet, what else could it be? And yes, down in the valley, we found the mountains on all sides completely obscured, hidden from our sight. Everything looked strange. Eerie. Near Bonita Junction, distant trees stood out like spectres, as if in fog, and even nearby trees and the flooding creek took on an appearance completely different from what they had presented a couple of hours earlier. 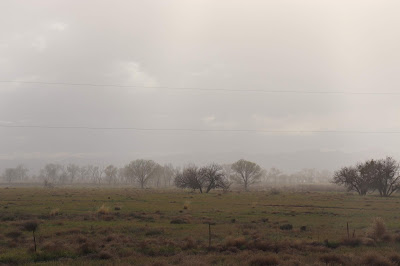 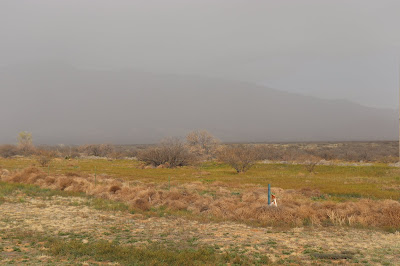 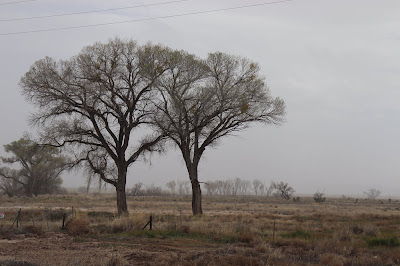 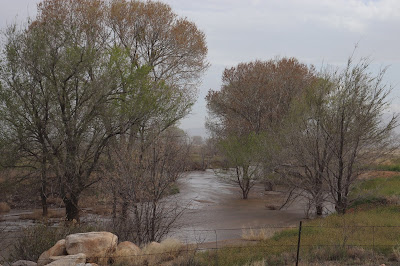 It was almost as if we were transported back to the Illinois prairie, with trees and telephone poles appearing out of a haze. 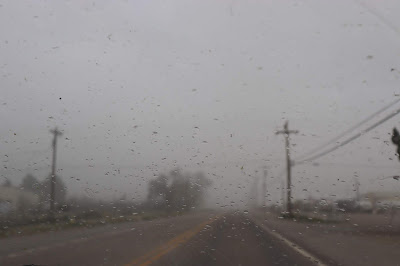 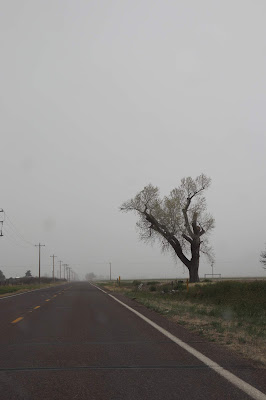 To see how much difference a dust storm makes, below are a couple of images that show its edge. Amazing, n’est-ce pas? 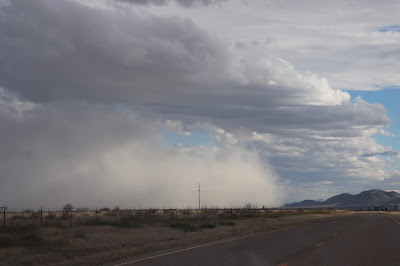 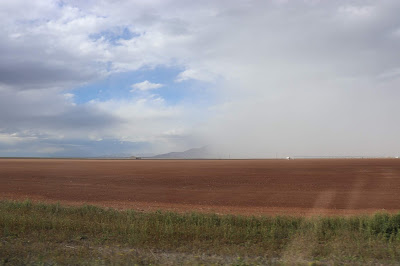 It was so windy (as well as dusty) in Willcox that we were practically blown from our car into the grocery store and back again, but on our way out of town, heading home to the cabin in Dos Cabezas, the rain began. 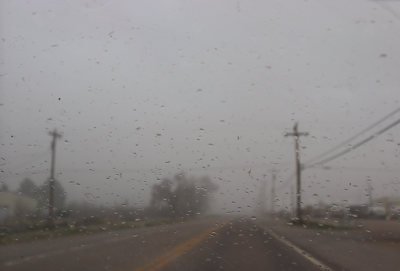 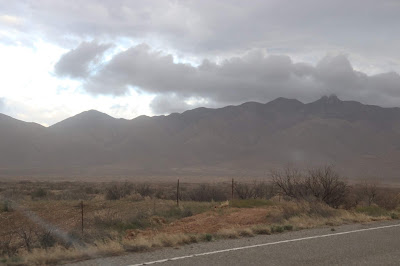 As we gained elevation, we left the dust behind but not the wind or rain, and now on Tuesday morning, the cabin being pounded by rain and shaken by wind, after a night of much of the same, I am immensely grateful for our Monday expedition. We can hole up now and be cozy for a couple of days. 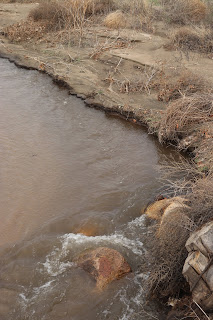 And indeed this morning we are being battered by wind and rain. Pounded. Hammered. The rain falls so close and so thickly that the mountains are again hidden from sight, as they would be by fog or dust.Will we see snow? It’s possible, but I suspect at this altitude it will just be rain. But it is all good as it is. Rain or snow, either one is good for the land. Either one brings water to the thirsty earth.

Meanwhile, we are curtained off from the world, and we have plenty to read....

What a beautiful descriptive piece! The only thing more astonishing would have been finding a cave with a bookstore in it!!!!! So love these reports... especially when we're still socked in with ice and rain- though we did have a gorgeous sunny day yesterday...

Well, Barbara, it's been a cold enough winter here -- not over yet -- that there is a lot of complaining from the year-round locals. What will the rest of March bring? Wild weather today all over the country! But you've given me a quest: to search out a bookstore in a cave!