Fall this year has not brought the usual much-desired, restful slow-down we anticipated. My mother’s death, a couple of stressful trips on expressways around Chicago (“back roads” in that part of the country exist no longer), family revelations, the big street fair in Northport, visitors, another friend’s death, and national political hijinks combined to necessitate our staying in high gear, it seems, through September and into October. There has been a lot of good mixed with the more difficult challenges, but all of it has been intense. Even reading Jane Eyre for our little reading circle (see previous post) was no escape for me this season. Disturbing dreams and disturbed sleep give way at last — none too soon, as the days grow shorter — to faint morning light and the coffee that helps me decide I can cope with life for another day.

Last night, in the middle of the night, I finished an odd little book, The Adventures of Ferdinand Tomasso. It was not cheery reading. (This particular copy is from the private library of Suttons Bay author James B. Hendryx, which is its main appeal to me as a bookseller.) I don’t even know if it’s fiction or nonfiction or who the real author might have been, but the story unrolls in Mexico, with Europeans arriving, encountering the natives, storming their cities, and forcing what they call “Christianity” on them with cannons. I read descriptions of murder and slaughter of thousands and can’t help thinking of all the individual lives that count as nothing to the warriors on both sides. For anyone to “win,” thousands had to die, and a civilization had to be brought to its knees. Ambition and greed and power lust.


Finishing that book and still wide-awake, I needed an antidote, something familiar, some reminder that life can be, for the fortunate, in certain times and places, ordinary and happy. I might have chosen Harlan Hubbard’s Shantyboat to re-read but instead plucked another volume from the same shelf, Houseboat Girl, by Lois Lenski.

Patsy sat on the front deck with Blackie and looked ahead. It was good to be on the river again. Life in Mayfield Creek had become dull and monotonous. On the river there was always something new to see. The river was full of bends. The houseboat was always turning corners and coming out on a new stretch. Every bend brought a new landscape, and often there were boats and barges to be seen.

I read for a while, then slept again, until finally it was not an unreasonable hour to get up and make coffee.

Without new landscapes, I muse, sometimes old surroundings can appear new again. That is, what has lost its sparkle or been lost to view because the mind has been otherwise occupied can take on again its own dear, familiar wonder. I look around our dining room, what I sometimes refer to as the “middle kingdom” of our old farmhouse, and feel as if I haven’t seen it with a loving eye for a long time.

An old round oak table my husband found discarded by the side of the road and brought home with the help of our brother-in-law is where we have meals. Back in the 1970s everyone, especially those who had moved “back to the land,” had to have old heavy round oak tables with massive feet. Now that kind of furniture is no longer in style, country homes taking on much more sophisticated looks, but the table suits our old house and the way we live. Sometimes when we sit after dinner, listening to the radio or reading, a fire (gas) in the fireplace, David says, “This is just how it would have been for Joe and Anna,” the old Bohemian couple (Czech, that is, not Beatnik) who farmed the 80 acres here years ago, kept cows and pigs and chickens. Joe and Anna had the house moved down from its original location up on the hill, where it would have had a stunning view over Lake Michigan. Did they think that in giving up the view they would be out of the wind? The wind swoops downhill to the house, as does the snow! But they no longer had to pump water from their well up the hill, so maybe that was the saving grace. We like being behind rather than on top of the hill: views are taxed, but privacy isn’t, and we like our privacy. We can walk up the drive to see the view.

An old black wood-burning fireplace (it now burns propane) holds a couple of cast-iron frying pans, a gathering of stones (all houses in this part of Michigan have gatherings of stones somewhere—on windowsills, tables, or wherever), a painted, cast-iron horse, and, since the fireplace is not in use this morning, a vase filled with asters from our meadow. It is aster season now. The asters are deep purple, magenta, and a light pink. The vase came from a friend. Nearby on a counter — because our kitchen is so tiny that counters are arranged to extend outward into the dining room — is a bowl of onions, on another counter a cookie jar. On the walls are paintings by my husband, a framed photograph of shoreline at sunset (gift from the photographer), and a couple of Japanese prints. Two Western saddles rest on stands near two of the walls.

The thing about this room that makes it so comfortable in winter is that it has no exterior walls. An enclosed (but not heated) porch on the west, enclosed (not heated) woodshed on the east, and rooms to north and south embrace the space, though windows through porch and woodshed that admit daylight and doorways to kitchen, “cozy room,” living room, and bath and bedroom keep the room from inducing claustrophobia. On cold evenings, with a fire, no room could feel more sheltered.

Here in the morning, by lamplight, with an illustrated children’s book beside me, I feel calmer than I have in many weeks.

“On the river nobody likes to hurry,” said Daddy, who had just come in. “That’s the good thing about it.”

We’ll get to wherever we’re going to get, politically and personally. Wherever we are today, we won’t be there forever, and that's true of where we may be tomorrow. None of us will be here forever. Life is short. There are days that demand action, but time comes -- for each of us -- to back away from action, if only for a while. 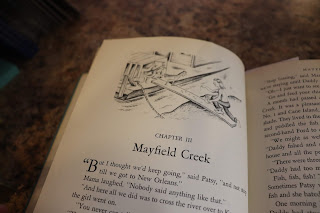 Rest. You need it. And we can't change what has happened politically right now. So we rest. We don't give up...but we take a breather.

We have my grandmother's round (oblong with leaves) heavy oak table at the lake. We had it in our house growing up too. I love that table. Once upon a time I wanted it here, but I'm content that it's at the lake where once in awhile the whole family sits around it just like we did as kids.

I was out today in the damp, dripping woods. We have some similar color in the wetlands. Those photos are likely to show up in a blog sooner or later.

I hope to get up there this fall, but I don't know. We've traveled so much lately that I, too, am tired. Though I haven't had the loss you've experienced and I know that makes a person extra exhausted.

So rest. It's all the way it was meant to be.