Spinning Off From Turner’s Frontier Theory of American History 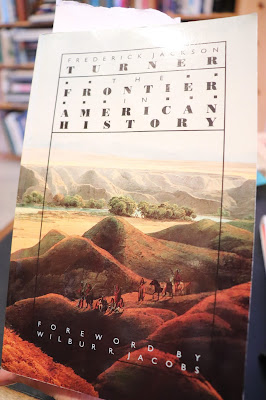 Only four pages into Wilbur R. Jacobs’s foreword to a modern edition of Frederick Jackson Turner’s The Frontier in American History, I am struck by an implication of his frontier theory for our time in history. I'll have to see how my thinking and questions play out as I continue reading, but I thought going on record with some initial impressions and wonderings would be a place to start.

Turner saw history (I'm going now by what Jacobs writes) as the self-consciousness of society, the latter an evolving organism. The particular biological organism that constituted in Turner's view American society, he argued, evolved from the country’s frontier beginnings and a continually westward-moving frontier, the American frontier offering escape from old bondages -- first the bondages and habits of Europe, later those of the Eastern colonies-become-states. Moving ever-westward also, he believed, unified Americans as Americans, moderating sectional differences that had been so important in the East they left behind.

One obvious fact (but I will state it anyway) is that Turner’s theory concerned the movement of white American pioneers of European origin. The fates of free or enslaved black peoples and of Native Americans “concentrated" by government policy onto smaller and smaller areas of marginal land were only tangential aspects in his story of the evolving America, rather than part and parcel of it. I state this obvious fact for two reasons. First, it is not only true but important when examining any history or historical theory about our country. Furthermore, however, I see it as the crucially overlooked seed to the implications of his theory that cry out at me as I prepare to read Turner in 2018. -- Implications of his theory, mind you, which I may accept, reject, or seek to modify after reading in in its entirety.

But let us accept for a moment, provisionally, Turner’s thesis about the frontier as that temporary boundary moves progressively west:

(1) As each successive “frontier” became settled, would it not become a new “section,” with its own settled habits and prejudices and rivalries with other “sections”?

(2) If Turner were right about sectionalism being left behind on the frontier, what did he imagine would happen when the frontier vanished, when pioneers reached the Pacific Ocean and could go no further to escape the bonds of habit? Is this where we are today?

(3) With the “safety valve” of “free land” [appropriated or conquered] no longer available, would social pressure build to the point of explosion?

After I read this book, I’ll turn to what other historians have said in response to the themes Turner hammered away on over 100 years ago.