Now Is the Time For Northern Michigan Apples

Fall leaf color in northern Michigan is lovely, no denying, but the perfume and flavor of the season come with apples. This year’s crop looks bountiful from where I stand and walk, my two little home trees weighed down with fruit more than matched by what I call wild apples, those at the edges of cherry orchards and along old farm lanes, trees that may not be strictly wild at all but remnants of earlier orchards and homesteads. I hedge on calling them wild because the Artist reported to me a conversation with local farmers who referred to wild apples as “spitters,” i.e., uneatable, but I certainly wouldn’t classify ones I’ve harvested in that category. One apparently wild apple’s taste pleased me so much I hoped to identify it as a specific variety so I could procure a tree of my own — because other people’s trees, I’ve learned, have a sometimes tragic way of disappearing, chopped down or bulldozed for what I can only call mercurial reasons, no one ever having asked my opinion, let alone my permission. Let wary deer feast while they can!

I brought a basket of apples from my home trees to the bookstore (I’ll never get all of them dried or made into sauce this year), initially thinking that a gift apple should accompany each copy sold of Barbara Stark-Nemon’s novel, Hard Cider. My second thought was that any purchase merits an apple, and ultimately I decided that even people wandering in and claiming they have “no time to read” should not leave empty-handed but take at least an apple from their bookstore visit.


My current reading is a sort of farm and family memoir, Cidermaster of Rio Oscuro, set in northern New Mexico. Author Harvey Frauenglass has set me to dreaming of an old French apple he found listed in a Michigan nursery catalogue, Calville Blanc d’hover, a delicately sweet dessert apple beloved of Louis XIII and Thomas Jefferson and still served, Frauenglass says, “in the finest restaurants of Paris.” I read the description to my husband, the Artist (stressing the idea that this particular apple contains twice the vitamin C of an orange, my enthusiasm amusing him no end), and he immediately proposes a road trip. When I finally locate the nursery online, however, they don’t have the desired cultivar listed at present. And the Artist and I were talking at cross-purposes, anyway: he had in mind buying a peck of apples, while my plan was to buy a tree. Having time to read means making the time, giving a priority to reading. Having time to harvest fruit from a newly planted tree is different.

The apple has been in the patrimony of the human race longer than any written historical record we have. We can trace the origin of the apple to western Asia, and we have evidence of its wide cultivation by prehistoric people. The apple is as close to being a universal fruit as any we have. Perhaps that’s what makes it a good choice for the object lesson in the Garden of Eden. - from Harvey Frauenglass, Cidermaster of Rio Oscuro

How many years did I wait for apples from the trees I have now, and how many more years will we have in our home to enjoy future harvests? Then there was the second plum tree, the one that died — and the first, I remind myself, that still flowers but stopped bearing after showing early promise.

Apples I have, however, in abundance. Apples at home and apples abroad. The glorious sight of apples, their heady aroma, the juice released as the skin is pierced by knife or teeth. Maybe Eve made the right decision, after all, yielding to the apple’s temptation. And then she and Adam became farmers — and cultivated apples? 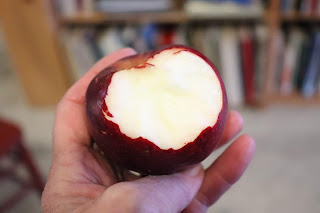