Are We Homogenized Yet?

People often think of the United States as one big, commercial, undifferentiated whole, and it’s certainly true that one finds many of the same chain motels, chain restaurants, big box stores, etc. almost anywhere from coast to coast. Yet how much variety exists alongside and amongst and in the large spaces between this sprawling sameness! 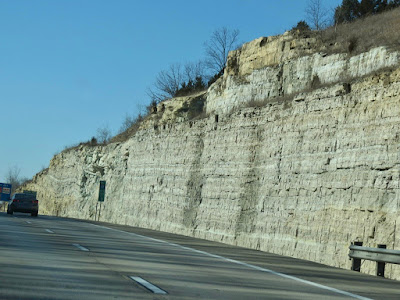 Pancake-flat prairie gives way to rolling prairie that in turn gives way to taller and taller wooded, rolling hills overlaying limestone ledges and underground caverns that go on until they flatten out again in plains and eventually (we are not there yet today), rise up as mountains. The earth itself changes color as one moves through the landscape, and so do the rocks and even the soil. 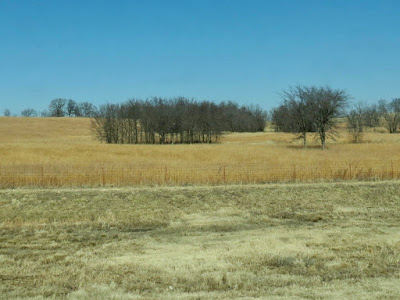 And through the land run the rivers and creeks, and in it lie innumerable lakes and ponds. In Missouri and eastern Oklahoma, it seems that every river of any size has been dammed, such that the map shows huge, meandering impoundment lakes, surely the joy of recreational fishermen, but the smaller bodies of water constantly tug at me as we pass them. 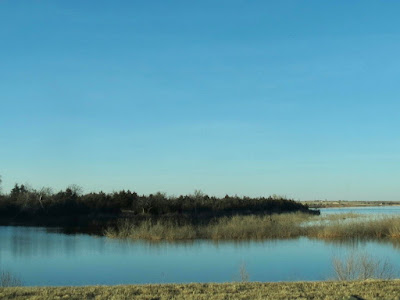 Traveling with no more detailed map than a U.S. road atlas, I find myself constantly frustrated by not knowing the names of little creeks and minor rivers we cross. It seems wrong to take so little note of them, glancing ignorantly and never learning their names. But then, the little ponds and rivulets probably have no names at all. 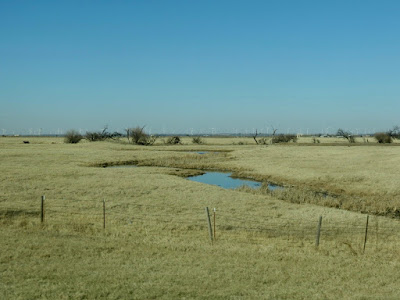 Most of the animals we have seen in the past two days have been cattle, because serious Western cattle country begins in western Missouri and continues into and across Oklahoma. I love seeing them, cattle of all colors, here a group of calves, there a couple heavy bulls fenced separate from the rest, frequent herds scattered across enormous open pasture land. 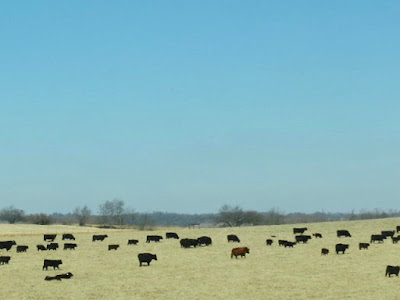 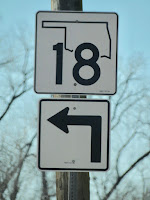 We took a little break from the toll road to explore a two-lane road for 30 miles or so, however, and there I was rewarded by five horses out in a pasture and, by the side of the road, an armadillo! The Artist said the detour would really be worthwhile if only he could spot a Rolls Royce, but the odds were against him there. Armadillo 1: Rolls Royce 0.

For some reason, I keep noticing hawks on this trip west. Today — again, without really looking for them — I managed to spot six. The first one was perched in a tree. The second and third were perched on one branch, side to side but looking in opposite directions, so that between them they would not miss anything. Hawk #4 was on the ground, in the grass, standing there as if waiting for a bus; #5 perched in a nut tree (in the first nut grove we saw), and #6 was, sadly, roadkill.

Missouri is thick with sycamores. It’s thick with trees in general, endlessly rolling, wooded hills except where cleared by the hand of man. So many outstandingly beautiful trees appeared during the course of the day’s drive, and yet how many will I remember? Most have already vanished from memory. There was one sycamore, though, its branches as white as sun-bleached bones, and at another spot along the road a lightning-killed pine stood blackened, broken stubs branches still reaching for the sky. 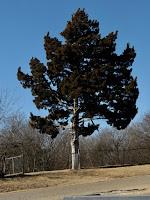 Only when we stopped for gas at the start of that little detour did I finally have a chance to make a single tree portrait. Farther down that two-lane road I spotted the trip’s first soap tree yucca (another one appeared later in the day in Elk City), but you’ll have to take my word for it.

For much of this Monday, January 29, we were on the Will Rogers Turnpike, but other people were here before Will Rogers, and as our road continued west, signs along the way reminded us that we were entering the Cherokee Nation, Sac Nation, Fox Nation, Cheyenne-Arapaho Nation. Also, when we paused to take a break, we found ourselves among people of all ages and ethnic backgrounds and skin tones. Americans and visitors, everyone takes to the road! 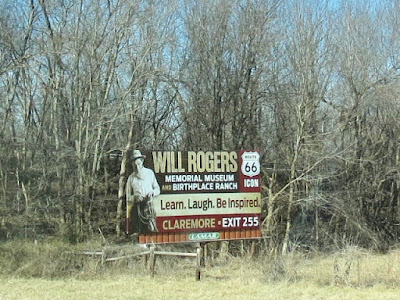 The toll road we were on for most of today runs parallel to old Route 66. Pieces of the old road remain, as do remnants of former lives along it. 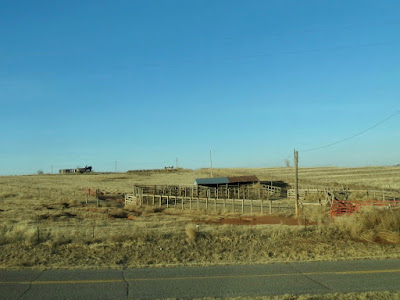 We saw wild horses in the foothills near Sedona. What a thrill! Thought of you,naturally.

You'll think this is funny, Maiya, but I actually got more excited about the armadillo -- oh, well, maybe not MORE but AS. But you saw WILD HORSES? I'd love to!