Wrapping It Up and Saying Good-By 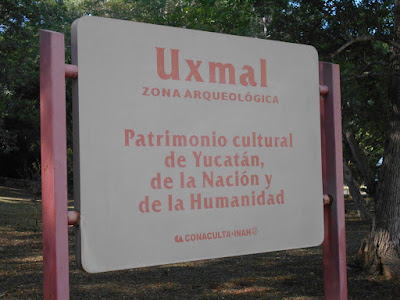 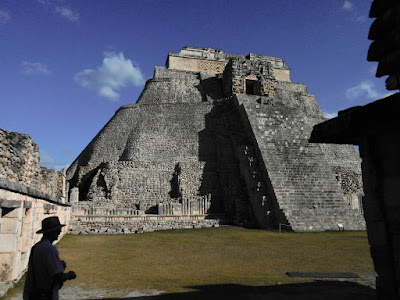 I was going to let a few days pass before posting this final part of my Mexico trip report, but I couldn't wait.

(See, if you missed them before, Part I here; Part II here.) 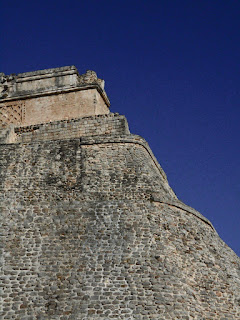 Our archaeological site on Tuesday was the famous Uxmal (pronounced oosh-mal), the second-largest of the ancient Mayan cities we visited in the Yucatan. Uxmal featured another imposing pyramid, numerous additional grand buildings, and a few architectural details we hadn’t seen elsewhere — e.g., “boot” stones reinforcing the walls of a typical Mayan arch and a motif reminiscent of northern egg-and-dart decoration. A handprint left behind from many centuries before was a touching reminder of the human beings who had inhabited this city. 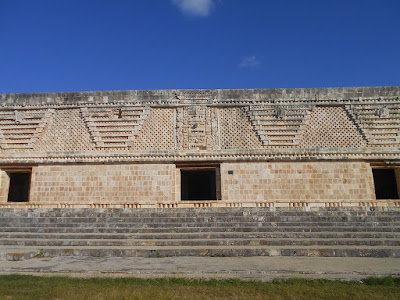 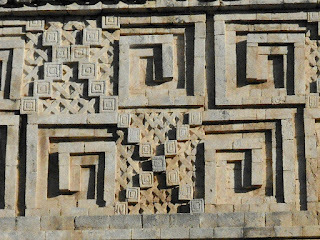 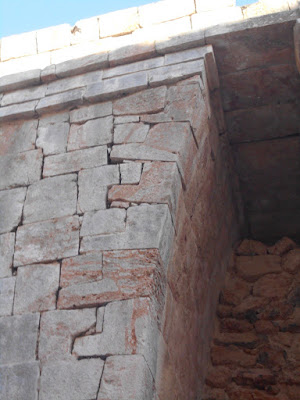 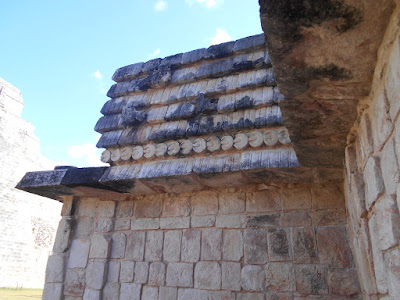 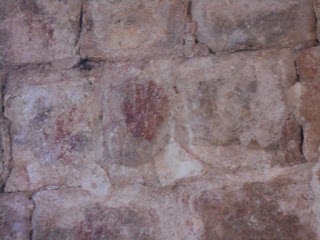 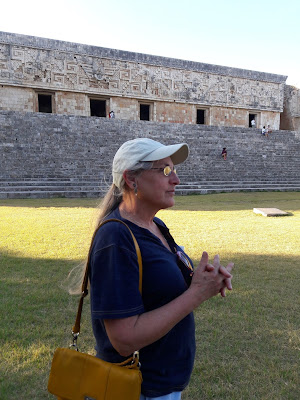 During a short free period in our tour, however, I wandered away and became completely distracted by ephemera, my attention pulled away from ancient stone buildings and monuments to a lizard sunning on the stone … and to flowering grasses growing through the stone and blowing in the breeze — until called back by my companions, impatient to see the rest of the sights at the site before its five o’clock closing. 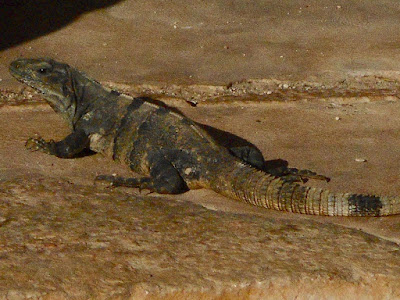 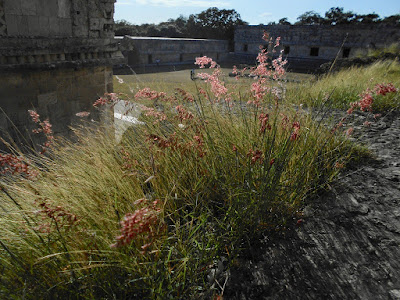 The many large, imposing structures exposed when the jungle was cleared away have their smaller companions, also. In addition, numerous buildings, including large pyramids, are yet unreclaimed. And of course the simple thatched homes of the ordinary Mayan people, the people whose labor built the monumental buildings, homes built of sticks and palms, are lost forever. Was that handprint above left by one of these nameless workers? Or from someone as elevated as the architect? We will never know.

It would take years of study and many visits to gain command of the knowledge so generously imparted to us by Angelo. I confess I retain only bits and pieces and general impressions. The snake, Chaa the rain god, the death heads, the square shape of the Mayan universe…. 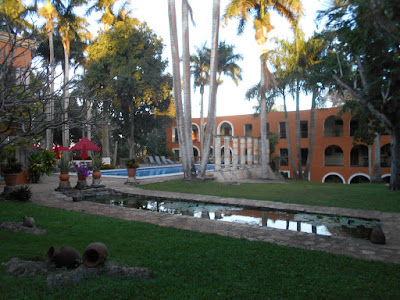 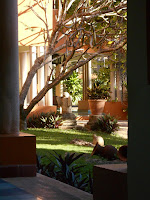 The afternoon was still sunny when we checked in at our nearby hotel, the dreamlike Hacienda Uxmal. Once a private hacienda, or plantation, the hotel is graced with historical artifacts and photographs throughout. Wooden louvered shutters on the windows let in tropical breeze and birdsong. 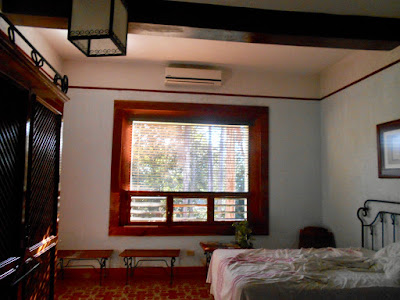 Like Valladolid and Merida, Uxmal was a difficult place to leave. Leonore and I agreed that it would have been lovely to remain there for several days, walking to the archaeological site to sit in the sun and soak in the past for long, leisurely hours. 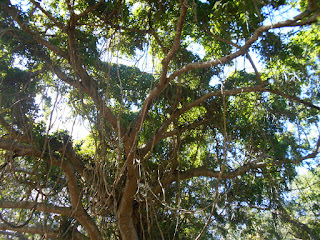 Our last day’s schedule, however, was very full, taking in three sites along the Puuc Route — Kabah, Labna, and Sayil. All three were close enough to Uxmal that our early morning start got us in before the rest of the world, but our party was larger that day, as we were joined after breakfast by two more people, a couple who would have been with us from the beginning had it not been for transportation glitches in London and New York. The man was from Canterbury, a retired publisher, his companion a woman from Warsaw. A full complement of tourists for Angelo would have been six, but we only had a single day with five, and after Leonore and I left he would go on with three again for the remainder of the 10-day tour the others had chosen at the start. 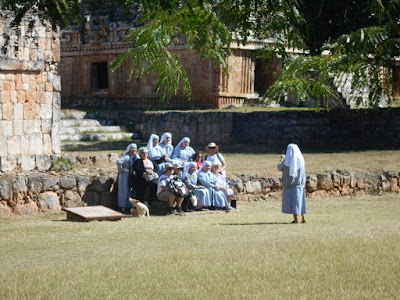 The only other people at liana-draped Kabah when we arrived was a group of nuns, their lay companions, and a stray dog accompanying them — probably uninvited. Two of the women, it turned out, sisters of one of the sisters, were visiting her from their present home in California. They were a happy group and pleased when Leonore told them how much we loved Mexico. Seeing them there at the ancient Mayan site is a memory that makes me smile again now. Also note the dog that has attached itself to the group!

My camera stopped cooperating for quite a while at Kabah (it had been problematic off and on at Uxmal, also), which was frustrating on the one hand, but on the other hand that “innate perversity of an inanimate object” (to quote my father) freed me up from photographing and let me simply be where I was. Now I recall with my mind’s eye two enormous trees, looking like African acacias, along the ancient sac be, or white road, leading from the temple to the edge of the city where the Uxmal king would arrive through a ceremonial arch. I was fortunate to have the camera allow a lovely shot of the arch with morning sun coming through. (At least, I hope I have paired my photographs to their proper sites. Again, corrections welcome!) 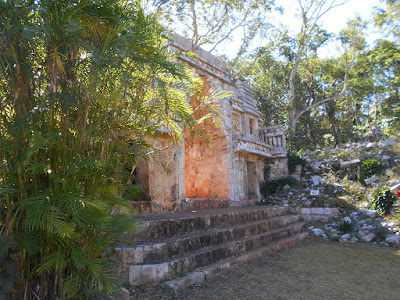 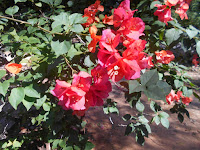 Sayil was lovely, too, with more birds than any of the other places we had been, possibly because we were on a jungle footpath rather than out in the open and because there were very few people around. I was able to photograph some of the ubiquitous bougainvillea and, more importantly, a fertility god we trekked deep into the jungle to see. 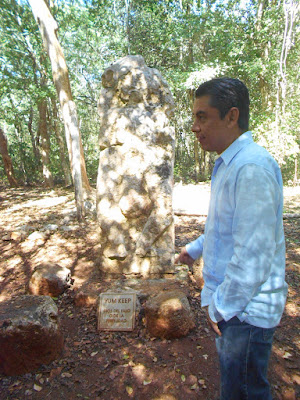 And then we returned the three 10-dayers to Hacienda Uxmal, Angelo bought the two late arrivals their tickets for the Uxmal site, and Leonore bequeathed to them her printouts of information on Uxmal, since they would be seeing it without a guide. All that taken care of, Angelo drove the two of us back to Merida, where he had arranged to hand us off to another driver for the trip back to sweet, lively Vallodolid for our last night in the Yucatan.

Our second room in Valladolid overlooked the pool rather than the courtyard restaurant, so it was not as lively (the restaurant below open until 11 o’clock) but much more peaceful. And the next morning we were in the lobby at 6:30 a.m. (half an hour before the restaurant would open for breakfast, alas!) for the drive to the Cancun airport with our last Yucatecan driver, and four hours later we were in the air, heading north. 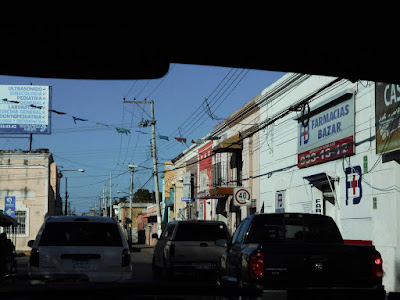 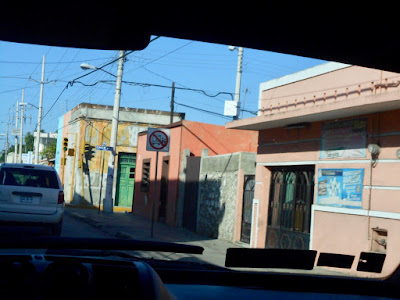 So many sights and sounds, tastes and smells we had experienced … the moist, balmy air, hot sun, and green, green, green everywhere … so many centuries of civilization and culture to absorb that it was hard to believe we had been gone from home less than a week and that would soon be back in the cold, white world of a Michigan winter.

Until my friend came up with the idea for us to tour Mayaland together, it had never occurred to me to dream of the Yucatan, but being there was the realization of a dream I hadn’t known was in me, and I will be dreaming of return for a very long time. Closer at hand, a winter’s study awaits in Arizona, where the Artist and I will be by the beginning of next month, because I am more motivated than ever to pursue the Spanish language seriously and in a disciplined manner (rather than simply reaching for a dictionary to look up the odd word here and there), and I want to learn Mexican history, as well. I am delighted to see a new book just released on Cortez and Montezuma and look forward to reading it.

What a rich and varied and wonderful world we are given with life -- the “essential Heterogeneity of being,” as Machado’s character would have it. All of life's fascinating diversity to explore and experience — who could wish for less, for homogeneity? It baffles me! 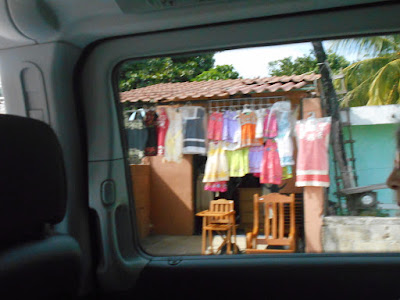 Life is so rich and goes by too fast!

A luxury I gave myself while away from home was to be also away from the news. Five or ten minutes one morning to get a weather forecast and from then on no TV. I bought a newspaper on the way out of Vallodolid, but mostly as a souvenir and to see how much I could manage to translate. While in the Yucatan, I was walking on earth, but my spirit was soaring above the clouds, free of angst and fret while traveling ancient, more recent historic, and modern roads in the sun, and I cannot see my break from the daily news as irresponsible. After all, I was paying attention, to everything around me, which I always feel is my primary calling in life.

Now I will close the last chapter of this condensed travel memoir with a few lines from Octavio Paz and leave it to you to make any connections you can to my posts and/or the current world at large. Maybe there is no connection at all, but the thought is interesting nonetheless.

[Alfonso] Reyes tells us that the writer’s first obligation is fidelity to his language. The writer has no other instrument but words. Unlike the tools of the artisan or painter or musician, words are full of ambiguous and even contradictory meanings. Using them should mean clarifying them, purifying them, making them true instruments of our thinking…. The roots of language are entwined with morality, and thus the criticism of language is moral and historical criticism. Every literary style is something more than a way of speaking. It is a way of thinking, an implicit or explicit judgment of reality. 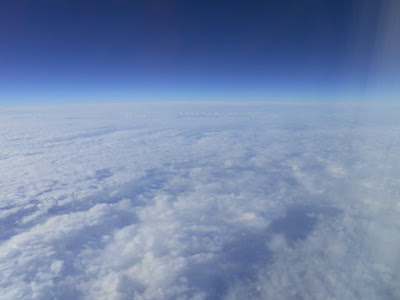 Above the clouds,
the sun is always shining.

What a lovely trip! Perfect! When we travel we don't turn on the TV either. It's such a nice break to let the politics go for a time. And they seem never to have moved very much when we get back, so we never feel we missed very much.

Thank you for sharing your trip with us. For a bit I felt the warm air and saw the flowering trees. Maybe tomorrow it will warm up here too. I can dream.

Dawn, I'm so pleased to have had you join me on your travels! I always enjoy going along on yours, too!