When Does Summer End? 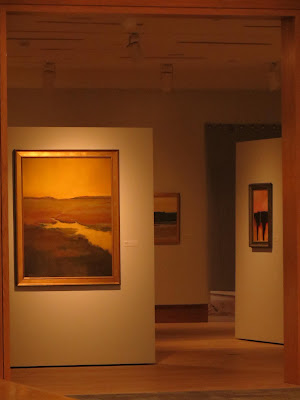 The official first day of autumn this year is September 22, making the 21st the last official day of summer, but for many families of schoolchildren and for those whose traditional minds can’t help seeing Memorial Day and Labor Day as summer’s bookends, the season ended last weekend For some others (I heard them muttering!) the end came earlier, with a couple of summer vacationers in late August shivering in their jackets and sweatshirts, feeling that fall had arrived in northern Michigan before they got here. Isn’t that always the way, though? Beginnings and endings of seasons are not like doors opening and closing all at once. Any two adjacent seasons interpenetrate and play tug-o’-war for a while before settling down to the new one. 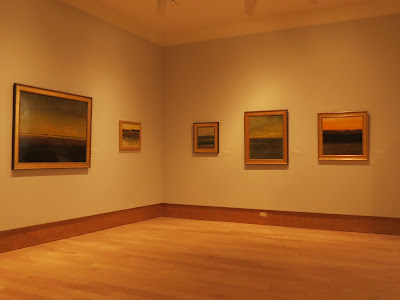 For many years, David and I used to take off for the U.P. the Tuesday after Labor Day. (Once we fled north on Labor Day itself but only had to learn that lesson once, sitting for hours in a long line of unmoving traffic during the annual Mackinac Bridge walk.) Northport, however, is livelier these days than it was a dozen years ago: no one is rolling up the sidewalks yet, a week into September, though there are more strolling older couples now than young families in town. Two years ago we didn’t make our getaway until October, and it was short then. So yes, there have been changes over the years, some more gradual than others. 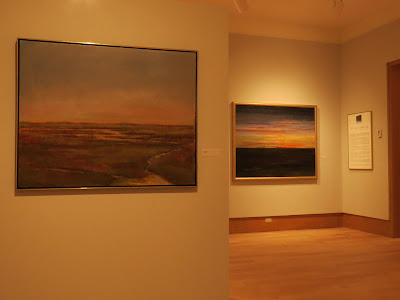 But this year has been entirely different in one very important way, and that has been David’s one-man exhibition at the Dennos Museum Center in Traverse City. A career milestone for him, it has been the focus of the season for both of us, and that’s why my bookstore, open on Labor Day itself until 3:30, was closed the Wednesday following Labor Day when old friends from Kalamazoo came up to see the show. 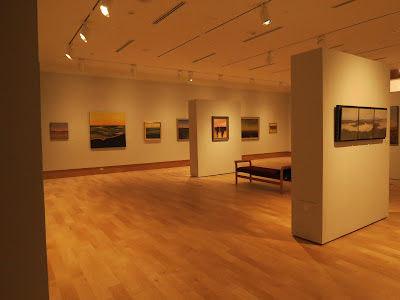 Since David and I were at the museum before our friends, I took the opportunity to photograph the artist with several of his paintings (below), photographing individual paintings, also, and several more inclusive groupings (above). 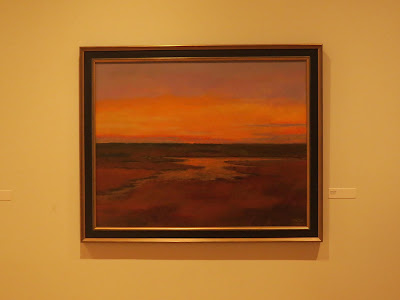 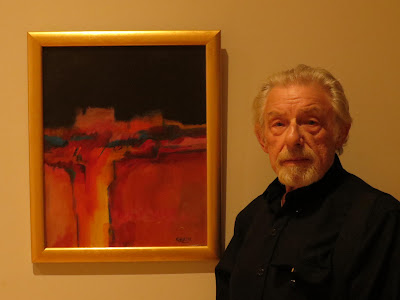 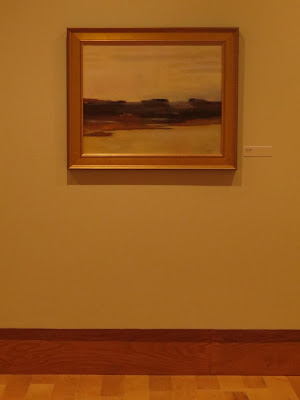 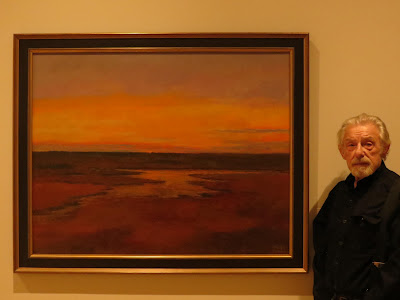 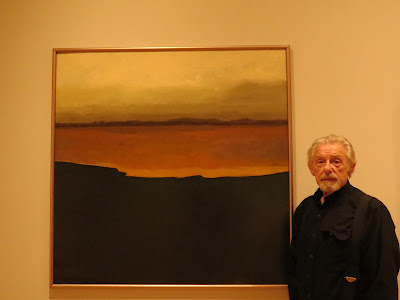 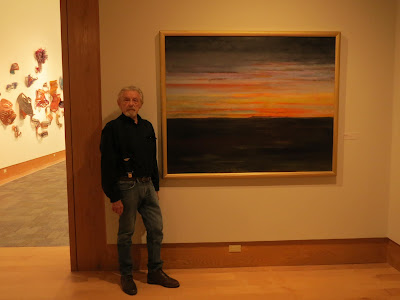 When they arrived, of course my camera and I were eager to capture David and our friends surrounded by his work. 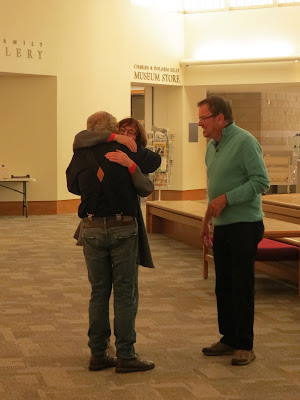 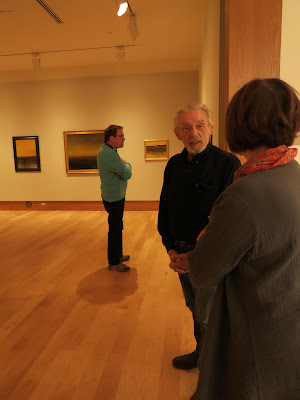 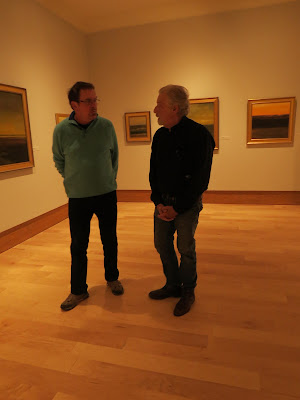 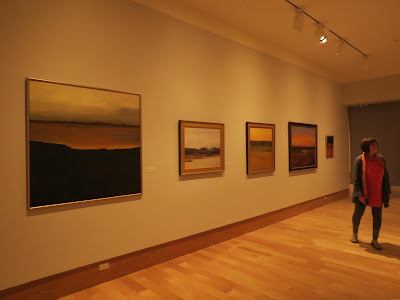 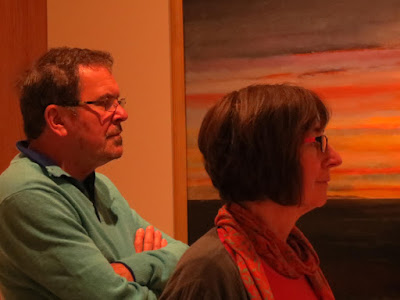 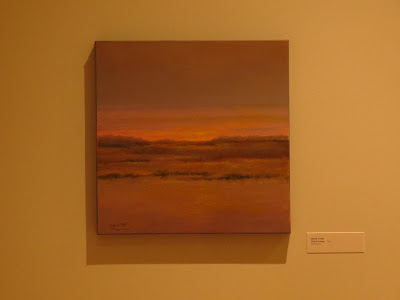 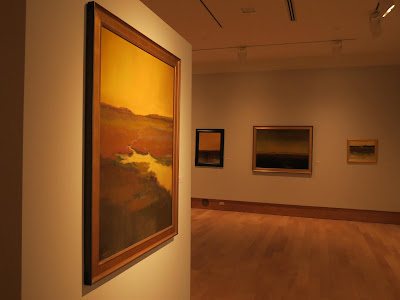 I guess it rained a bit while we were in the museum. I didn’t notice. We toured the sculpture of Sally Rogers and the Inuit gallery, as well as David’s painting exhibit, explained the new additions underway, and our friends were quite impressed by the museum in general. 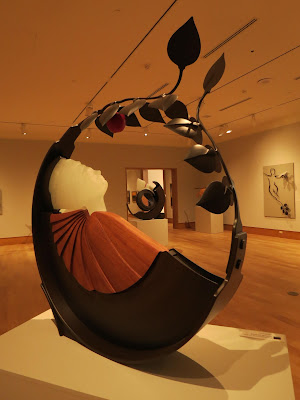 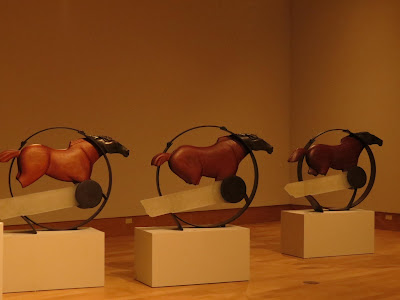 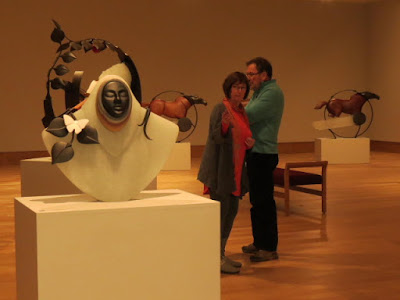 Tearing ourselves away at last, we adjourned to downtown and, creatures of habit, suggested to our friends Cafe Amical, an iconic Traverse City restaurant for (I’m going to say) 23 years. Our table was back by the fireplace, and so, again, I didn’t notice any rain until we left the restaurant to stroll up and down a couple blocks of Front Street and saw that the pavement was gleaming wet. Anyway, the rain had let up, and we had dry walking, and coming back east on the other side of the street, we stopped in at the old U&I (an even older landmark than Amical) for one last round of drinks and then strolled together to the big new parking structure down by the Park Place.

(It occurs to me that I’ll probably be saying “the new parking structure” as long as I live, just as the Civic Center, or whatever it’s called, will always be, to me, “the old fairgrounds.”)

Old friends! Time together! David’s beautiful show! One more Kalamazoo friend comes up on Friday, and then Saturday will be the last day of the exhibit, and we will go in Sunday to pack up the paintings, and that will be the close of summer for us. But oh, what a summer it has been! One for the memory book! 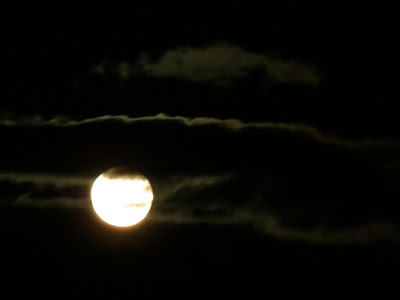 I'm so glad that people have made it into TC to see David's work. That's so exciting. Yes it was an amazing summer.

And you've had a major traveling summer, Dawn, so I know yours has been good, too! :)

It was a lovely exhibit. I wish there were a catalog to accompany it. Any chance that a book will follow?

Kathleen, there should be a video eventually. Book? I'll refer that question to the interviewer/videographer!

Thanks! I would love to be notified when there is a video or another exhibit. I have visited your book store a number of times, but not in the last couple of years. I need to get back up to Northport.

I will certainly post information here on Books in Northport as soon as it is available. And yes, Kathleen, do come back to Northport! It has gotten very lively in recent years but still not crazy or overwhelming. :)

Thanks, P.J! I hope to get up this Fall. A friend of mine makes an annual trip for apples at Christmas farm in Northport & I'd like to go there, too. I will stop by. :-)

Bookstore is open Tuesday through Saturday, 11-5, in October. Hope to see you there! You'll love the apple farm, too.