We Talk to the Artists – Then Go to the Dogs

Not knowing until the day of the event whether Ken Scott and Kay Krapohl planned to give a formal presentation or sign books, I advertised their appearance as “Conversation with the Artists,” and that’s exactly what it turned out to be. Ken’s message on Thursday was that they would do a Q&A if anyone who came to buy a book had questions, so I set up a few chairs in the front of the bookstore, with a signing table for the photographer and the painter. People came. They had questions. They had really good questions. The answers were fascinating. I didn’t write down everything that was said but did take a few notes.

What gave rise to the idea of two people trekking the Leelanau shoreline together. Ken cited the safety factor first and stressed that safety was particularly an issue in winter cold and on winter ice. Two people also meant two cars, one that could be left at the take-out point while the other (to be retrieved later) could be driven with both trekkers to their put-in location. Ken was also interested in what it would be like to work alongside another artist, especially one working in a different medium.

As a photographer and a painter, it was a given that the two of them would work differently. Ken Scott composes his frames onsite and does not manipulate images later, so his premise is “You get what you get,” in the moment. Very different, of necessity, was Kaye Krapohl’s way of working. She could not afford to stand in one place long enough to complete a painting and keep up with her trekking partner, too, so she made many studies (“scribbles,” she calls them) and photographs and notes for later use in her studio. There were also days when her usual “big picture” vision did not fit the weather, and then she learned to focus on small details she would not otherwise looked down to see.

I have a bit in my notes about an event Kaye and Ken did, sponsored by Inland Seas. It involved an exhibit, mostly of Ken’s photographs, and people with science backgrounds were invited to this free forum that gave the artists an opportunity to point to aspects of what they saw and ask the science people, “What’s going on here?” Sometimes it was sand structures, other times zebra mussels or something very different. Kaye was intrigued to find that environmentalists are not always opposed to docks, in that docks can provide habitat.

There were many more questions and answers and discussion, and altogether the conversation was fascinating. Somehow I prevailed upon both artists to stay long enough to sign most of the rest of my books, too, although Ken Scott was in a hurry to get outdoors with his camera, not wanting to miss “the light” as skies cleared after the rain and rainbows appeared. I’m sure he will have gotten some fantastic shots. [Have seen one of them since! Beyond belief gorgeous!] Mine from the front door of the bookstore leave a lot to be desired, but you may get a little feel for the evening. 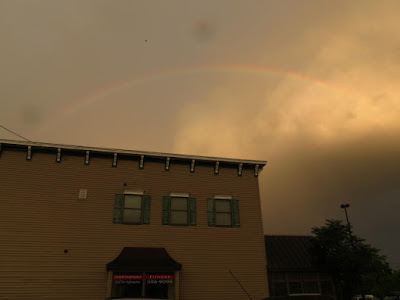 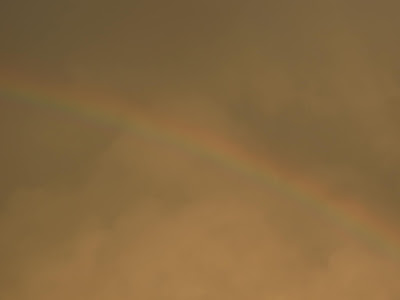 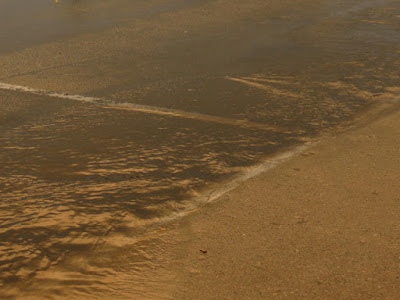 I’d had our reading circle over for a picnic on Wednesday, but although a camera was mentioned early on, somehow we all forgot about it later, so – no pictures! We had not all read a book to discuss together, but each of us reported on what we have been reading, and there were several recommendations for a group read. I’m not sure which books fall into which category (reports/recommendations/group recommendations), but some titles mentioned were: Independent People, the Icelandic classic by Laxness; something by Hemingway; Huckleberry Finn; Madame Bovary; McTeague; John Le Carre’s A Perfect Spy; The Way Things Are, by Lucretius (translation by Humphries); The Way of All Flesh; and All the Light We Cannot See, which two people reported they had tried to read and couldn’t get into, though everyone else who has told me (in the bookstore) that they read it loved the book. One group member has decided she will read one short story a day for 365 days. A noble goal! I want to introduce her to the stories of Valerie Trueblood.

So, Wednesday was the picnic; Thursday, conversation with artists; Friday, farm market; and then Saturday – dog parade and presentation by veterinarian Mike Petty, author of Dr. Petty’s Pain Relief for Dogs! You have to understand that “going to the dogs,” in Northport, is a good thing. Maybe you already know this, having read in the Leelanau Enterprise that the Northport Dog Parade began 20 years ago. (Yes, once again, time flies.) David Chrobak, then-owner of the Old Millpond Inn, was the instigator and force behind the parade, which quickly won the hearts of locals and visitors alike. 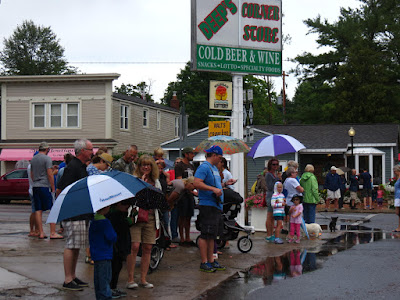 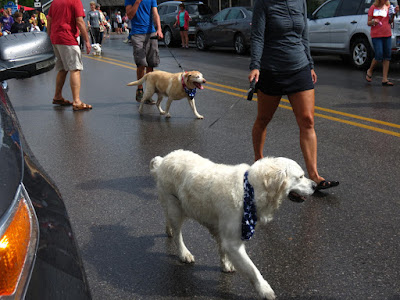 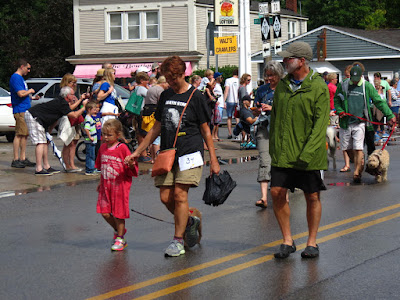 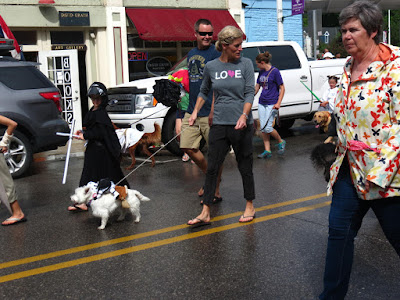 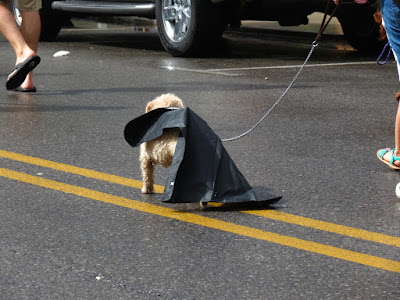 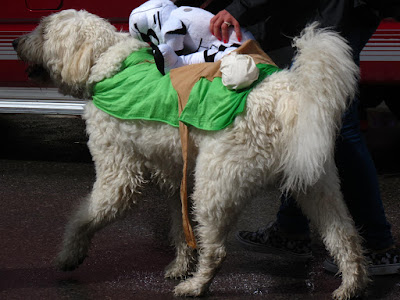 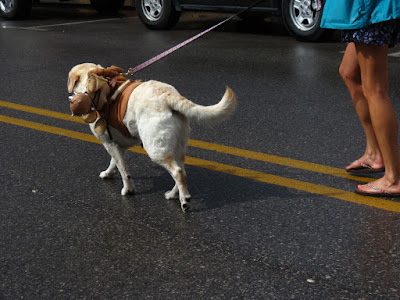 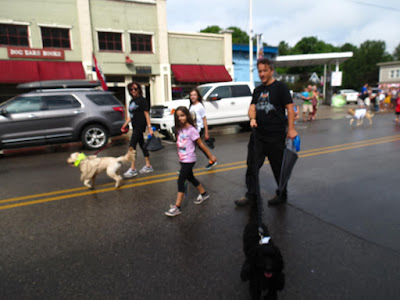 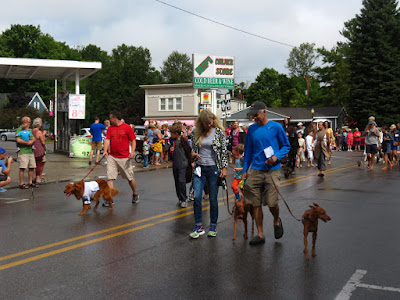 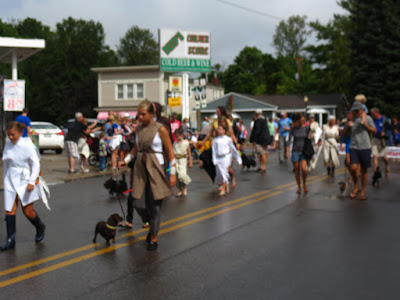 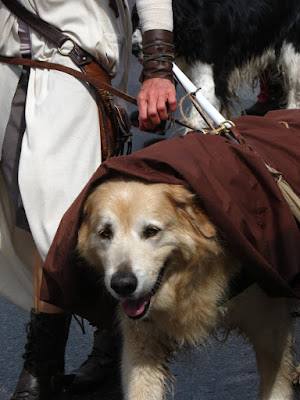 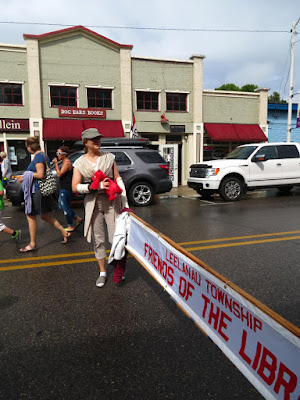 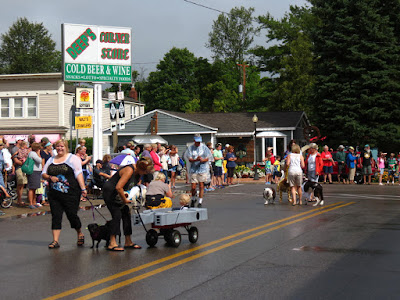 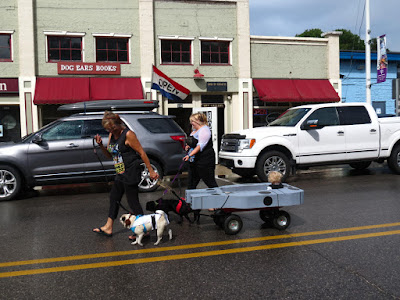 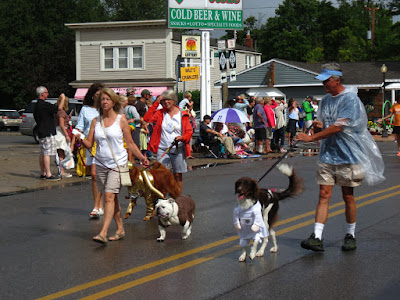 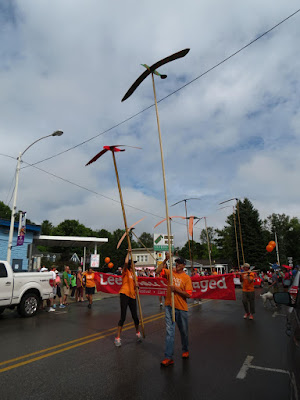 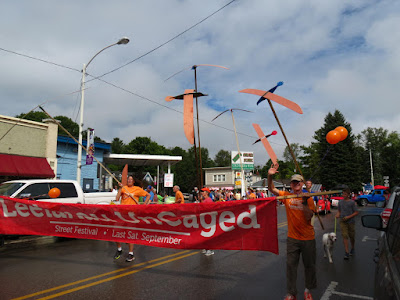 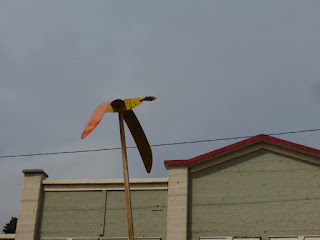 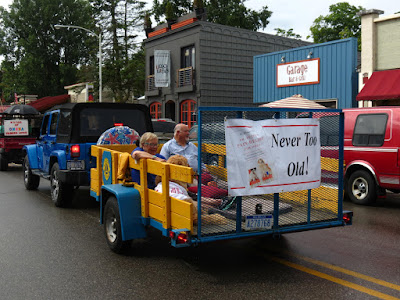 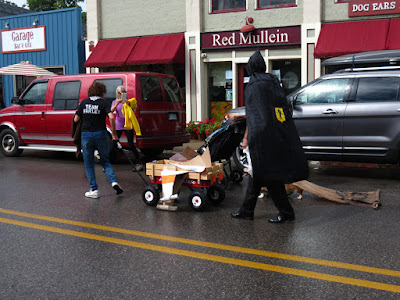 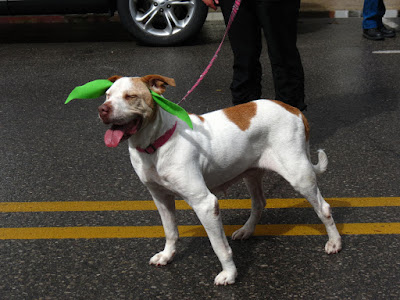 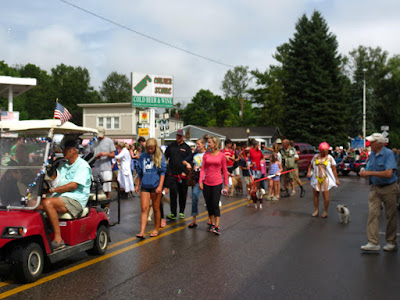 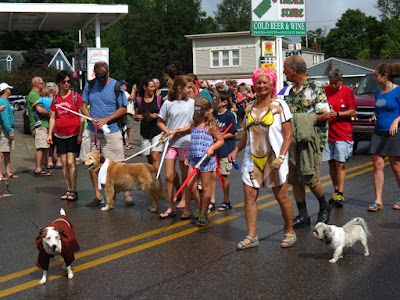 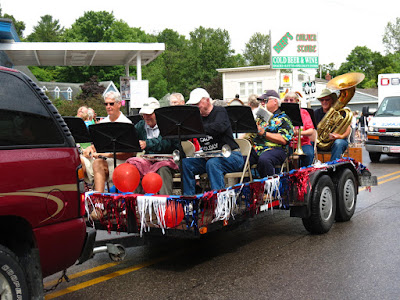 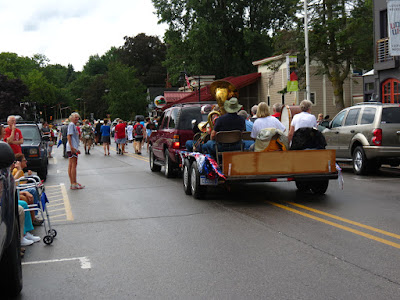 Like Thanksgiving dinner, the dog parade is long anticipated, planned for all year, and over in a trice. 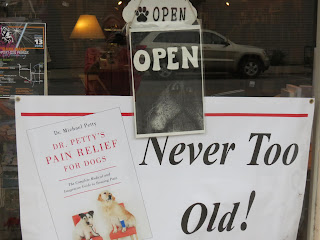 One major dog parade sponsor this year was Dr. Michael Petty, my guest author for Saturday afternoon following the parade. Mike’s book is Dr. Petty’s Pain Relief for Dogs, which I read and reviewed and highly recommend. As David Chrobak noted in last Thursday’s Enterprise, our pets grow old just as we do and, sadly, actually overtake us in their aging. As long as their quality of life can be maintained, however, Dr. Petty’s dog parade banner, on the trailer carrying his old dog (and other dogs with age and mobility issues), was “You’re never too old!” 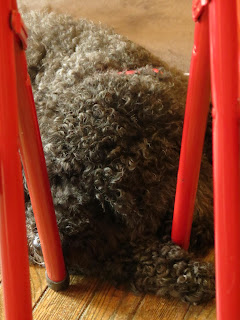 Dr. Petty's dog was pretty tired when they showed up at the bookstore for the signing, but one thing is sure: no one is too young or too old to enjoy the Northport dog parade! A limited number signed copies of Dr. Petty’s Pain Relief for Dogs available now at Dog Ears Books -- a reference book for your dog’s aging future and for all the dogs of your life!