Coming Back to Tell You More


On Monday evening, out in the shade of a basswood tree, I finished Karel Capek's War With the Newts. When I first picked it up and began reading, I skipped the introduction to go straight to the story, and so I was expecting something other than what I found in the book's pages. Finally, about halfway through the book, I turned back to read the introduction. What I'd expected, you see, was some kind of roman à clef, a fictionalized account of political events of the post-WWI period in Czechoslovakia, and I wondered how much, if anything, I would understand of the story. Well, it isn't that at all.

Capek's scope is broader, his vision wider, and both plot and characters are much more original (I'm guessing) than any thinly disguised series of events between the two world wars would exhibit. I mean, a colony of surviving prehistoric newt-like creatures bred as cheap labor that eventually become "civilized" enough to overtake the world? Really?

Given that Capek was of the same generation as Kafka, it is astonishing how well the warnings of this very innovative novel speak to our twenty-first century world. Suspicion and fear of the Other, of course, are nothing new in human life. Today's unblinking focus on globalization, however -- the insatiable hunger for global markets, ruthless competition for faster, higher profits and ever-cheaper labor, the resulting instability and upheaval and terror in one part of the world after another -- all these facets of our world today can be found in The War with the Newts.

The story begins with a Dutch ship's captain who encounters the "creatures" off a South Seas island. Natives are afraid of them and call them "devils," but the captain sees possibilities in their ability to dive for pearl-bearing oysters, and especially in the little value the creatures place on the pearls. He trades them knives for pearls, after a while other tools for pearls, and the newts (not yet called 'newts' in the story) quickly gain an advantage over their one natural enemy, sharks.

It is the sea captain's meeting with a "captain of industry" that unleashes the eventual Newt Age upon the world. At first all is positive, everyone seeing nothing but an enlargement of prosperity -- for humans, anyway, if not for enslaved newts:


Real self-respecting men of the Newt Age will no longer waste their time pondering about the substance of things [questions of religion and philosophy]; they will only be concerned with their quantity and mass production. The whole future of the world lies in the continuous increase in production and consumption; therefore there must be still more Newts to produce and to devour still more.

Shallow-water, ocean-living creatures, the newts' special skill is in constructing dams offshore, and so they are shipped around the world and set to work building land, so that countries with ocean shoreline might increase their territory. Worldwide trade in newts is big money, uncomfortably like slave trade. Although of course those trading in newts and buying them as laborers insist that the newts are very well treated, groups form to agitate for newts' education (they quickly acquire languages) and rights. International conferences are held, international agreements hammered out by nation-states, but the newts are citizens of no state, and so no state feels obliged to negotiate with them directly. The newts, however, multiply much more quickly than the humans....

When Captain Van Toch first comes to the door of G. H. Bondy to discuss the opportunity awaiting anyone with the foresight to exploit the clever newts, Bondy's doorman, or porter, Mr. Povondra, might have turned him away. Van Toch was not known to Mr. Povondra and had no appointment. But for some reason he sees the visitor in, a very small decision that has very large consequences for the entire world and the future of the human race. And so, for several years, Mr. Povondra is an avid reader of newspapers and collector of clippings about the newts.


Mr. Povondra received day by day whole bales of documents in all the languages of the world, of which especially the papers printed in Cyrillic or in the Greek alphabet, in the Hebrew, Arabic, Chinese, Bengali, Tamil, Javanese, Burmese or Taalik script filled him with pious respect. "When I only realize," he used to murmur over them, "that all this would not have been without me!"

He is proud to have had, though a person very modestly placed, nowhere near centers of political power, a pivotal role in world history. With later events, his pride becomes regret, but there is no going back.

Capek's manner of telling his story borrows generously from nonfiction. He uses the format of newspaper articles in some sections, quotes from propaganda, scientific papers and presentation, and he makes extensive and occasionally hilarious use of footnotes. Some footnotes go on for several pages and take on the feel of short pieces of fiction in themselves.

Why is Capek's novel (he also wrote plays) nowhere near as famous as the works of Kafka? In the final chapter of The War with the Newts, the author argues with himself:


"...Listen, do you really want to let the whole of mankind perish?"


The author frowned. "Don't ask me what I want. Do you think that through my will human continents are falling to bits, do you think that I wanted this to happen? It is simply the logic of events; as if I could intervene. I did what I could; I warned them in time.... I preached, don't let the Newts have arms and explosives, stop that hideous trade in Salamanders, well--you know what happened. They all had a thousand absolutely sound economical and political reasons why it's impossible. I'm not a politician or an economist; I can't change their opinions, can I? What is one to do? The earth will probably sink and drown; but at least it will be the result of generally acknowledged political and economic ideas, at least it will be accomplished with the help of the science, industry, and public opinion, with the application of all human ingenuity! No cosmic catastrophe, nothing but state, official, economic, and other causes. Nothing can be done to prevent it."

In Capek's novel the humans, by using newts to enlarge land for nations, diminished the shallow seas necessary for the newts' survival. It was only a matter of time before the exploding newt population demanded their seas back. The humans had dug their own grave.

Science fiction, political satire, dark humor, fanciful dystopia, innovative literature. War With the Newts is all that and deserves to be better known and widely read. If you don't believe me, here is someone else's pitch for the book. 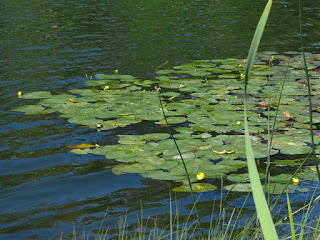 In a much happier frame of mind, we will visit freshwater shoreline on Thursday evening, beginning at 7 o’clock, when photographer Ken Scott and painter Kaye Krapohl come to Dog Ears Books to share their stories behind the beautiful book featuring their work, Leelanau Trek: One Shoreline, Two Visions. Please join us! 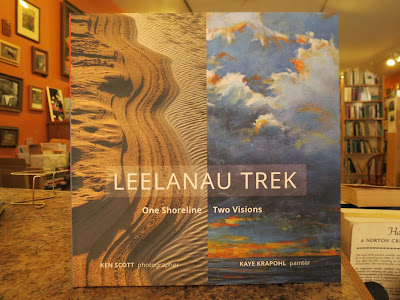