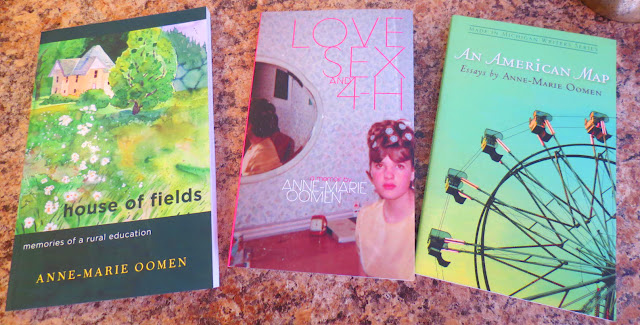 It’s practically unthinkable that anyone in northern Michigan would not know the name – and the work – of Anne-Marie Oomen. Her poetry, plays, magazine essays, and especially her books of memoir have long established her as a distinctive northern voice. Her place and time come through in everything she writes, and her writing is both lyrical and accessible.

Elsewhere, a couple years ago, I addressed the question “What were the Sixties (really) like?” I will not repeat what I wrote then, but if you missed the earlier post, you might want to go back and read it, and after you do, you’ll be even more ready to dig into Anne-Marie Oomen’s latest book.

Love, Sex, & 4-H – the title alone spoke to me! Oomen joined 4-H early, at age 8, when her mother became a group leader. The oldest child in her rural farm family, little Anne-Marie sought in 4-H an escape from farm animals! My exclamation mark is very personal, because I joined 4-H in upper elementary school hoping that membership would be Step #1 to horse ownership. It wasn’t. (No one explained to me that ours was an “urban” club rather than a farm club.) The sewing projects through which Oomen progressed over the years, going all the way to fashion modeling at Michigan State University, left me cold. I stopped early on, with the horrid gathered skirt requirement. Ugh! I did not stay with 4-H past grade school. But I loved the Head, Heart, Hands & Health pledge. Anyway, enough about me....

As Oomen tells the story of her adolescent years, political awareness was far from her life. The larger world intruded only with time-stopping events; otherwise, clothes and boys dominated her personal Sixties consciousness. As I have said many times, the Sixties were different for everyone who lived through them.

Here were sex and love dressed in church clothes, shirt collar just starting to unbutton—utterly seductive, surreptitious as snakes. Except for the fierce familial love of my people, I had no authentic understanding of either of those lunatics, love and sex, as they were expressed in that time. But I had 4-H, and, because of that, I knew this much: I knew how love and sex would be dressed.

Oomen’s experience in the Sixties, then, is not the story of a young radical in the making. Questions about love and sex, however, have come to young men and women in every historical decade of American life, regardless of any larger political context, and they always will. Oomen’s story, while hardly remarkable in itself, is told with remarkable frankness, and that, along with her always beautiful writing, is its strength. She neither paints her adolescence in false colors nor glosses over occasional petty, even shameful behavior. It’s all there, from the first stirrings to the slippery “everything but” slope.

Oomen might have subtitled this book A Memoir of the Sixties, since it covers the decade 1959 to 1969, her life from age 8 to age 18, and it is very much a young Michigan farm girl’s coming of age in that decade when ordinary adolescent turbulence took place in a larger national context of social turbulence. Of the three memoir books she has written – the first two were Pulling Down the Barn, stories of her rural northern Michigan family, and House of Fields, telling of her educational journey – Love, Sex, & 4-H does the most to situate one girl’s experience in a larger perspective. Oomen has many readers who did not grow up on farms or attend one-room schools, but all of us either lived through or (for the younger readers) have known from the classroom the major events of the 1960s. We have all, too, lived through teenage confusions, hopes, and fears, trying to redefine in those years our roles as sister, daughter, friend, and girlfriend (or, for boys, obviously, brother, son, friend, and boyfriend). 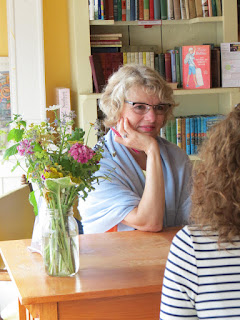 New readers are still discovering Anne-Marie Oomen’s book for the first time. Two young women came by chance to the bookstore on Tuesday afternoon, and, urged by Anne-Marie and her Northport bookseller, also attended the author’s formal presentation at the Leelanau Township Library the same evening. One of them was about to embark on an M.F.A. program in creative writing; both were excited to be able to meet and “hang out with” such an accomplished book author. They planned to return to their campsite and read Uncoded Woman aloud around the campfire. “You have to read the poems in order,” I cautioned them. “No skipping around, because there is a narrative.” Anne-Marie took over then and told them something about the protagonist of the poems and the maritime signals that name each poem.

Besides memoir, essays, and poetry, Anne-Marie Oomen has written seven plays for the stage, only one of which I have seen performed – and that one much too long ago. It told the story, all in verse, of farm women in the area now part of Sleeping Bear National Lakeshore. The power of the drama, very minimally staged, surprised and moved me. I want to see it again.

What a privilege and joy it was to spend hours on Tuesday with writer Anne-Marie Oomen! Even without paid vacation or sick leave, there are some very tangible benefits to this bookselling gig. I have the pleasure of introducing my writer friends to one another, bringing writers to readers, and, always, enjoying my small place in American literature’s northern territory. 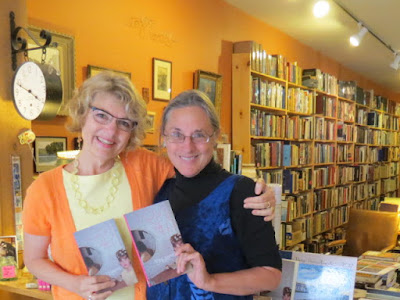 My wife grew up on a N WI dairy farm. She and her six brothers were all 4-H members, and rather than sewing or fashion, she specialized
in 'Diary Herd Mgt'. Which I was thankful for that morning when we
were camped in a tent alongside the Silver Bow River in W Canada. I
was backed into the tent by a curious Hereford. There were about 50
of them surrounding the tent. I was prepared to stay in the tent for
a week or two until they left, but she marched out beating a frying pan with a spatula and stampeded them halfway to Edmonton. I decided
then that the 4-H's stood for Head, Heart, Hands & Chutzpa!