The Generosity of Writers 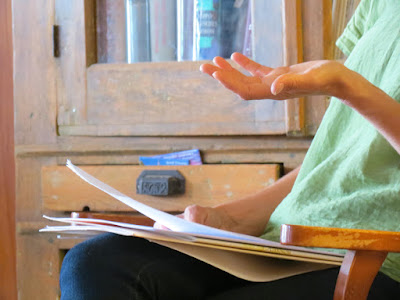 Of several photographs I took on Thursday of Holly Wren Spaulding during her reading at Dog Ears Books, the one above was her favorite. I liked it very much as I was framing the shot and quickly saw that it is not unlike the short forms of poetry Spaulding writes and coached us in writing.

Holly Wren Spaulding, a Michigan native and long-time Leelanau County resident, has made her home in Massachusetts for the last couple of years, earning a living as a self-employed writer, teacher, and writing coach. From that you should understand that Holly’s workshops are not generally free, that people are happy to pay good money to work with a writer of her talent and experience. Because of my own 23 years’ experience as a bookseller, however, I was not completely taken by surprise when Holly generously offered to give a little hands-on workshop on short poetry forms, gratis, following her reading at my bookstore. 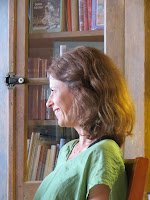 So she read first, both poems from her newly published collection, Pilgrim, and poems written since Pilgrim went to press, and shared with us the excitement of working on letterpress projects, setting type by hand for a few short lines of her poetry to be printed and framed as art. The lively, engaged audience had questions about the writing process that Holly was happy to answer.

When we got to the workshop portion of the event, Spaulding began by giving an introduction to the short forms of haiku and tanka and reading a few examples of these and other short poems less rigorous with regard to number of syllables. Then we were given our assignment: Think of a single encounter with the natural world, preferably within the last 24 hours. Try to capture the moment and make a human connection to it. I’m not going to share my “finished” piece (only finished in the sense that time was up), but the encounter I chose was the one pictured below. 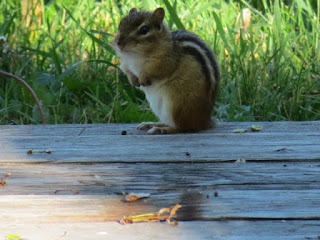 At first, looking for words to capture the moment I thought I had to mention the chipmunk’s stripes and its bright beady eyes. With trial after trial, however, what remained in each draft was the prayerful attitude of the tiny paws held to the chest. That for me was really the essence.

As, I think, the image of Holly’s hands at the top of this post, one hand holding a sheaf of poems on paper, the other gesturing to the audience, is the essence of her visit to Northport.

Holly Wren Spaulding, thank you again for giving us your time. It was lovely having you here. I know the audience members who are also writers are very grateful to have had the opportunity.

Reminder: Next week, on Tuesday, June 30, Anne-Marie Oomen will be at Dog Ears Books from 3 to 5 p.m., signing her new book of memoir essays, Love, Sex, and 4-H. Please stop in and meet another generous Michigan writer making a trip clear up to Northport!

You've provided a wonderful opportunity, and it sounds as if the evening was perfect.

Great photo, Pamela. I love how it's composed. So glad too you had a good turnout for this special event.