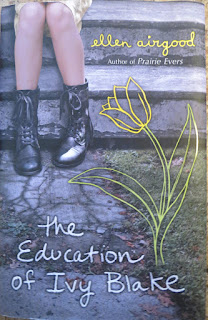 If you read Ellen Airgood’s first YA novel, Prairie Evers, you’ve already met Ivy Blake. Going to public school for the first time after being home-schooled by her grandmother is hard for Prairie, but life gets better when she and Ivy become friends. In case you have not (yet) read Prairie Evers, I won’t tell you the secret Ivy reveals to her friend there. It’s an important part of The Education of Ivy Blake, too, but you don’t need to have read the first book to enjoy the new one. Prairie is the narrator and main character in the book that has her name as the title. In The Education of Ivy Blake, Ivy takes center stage and holds her own.

The world of 5th-grader Ivy Blake is the real world, the modern world. Characters have cell phones, and there are no vampires. As has been the case throughout history, however, the real world can be a difficult place to grow up.

Ivy’s father is dead, killed in circumstances that would be traumatic for any child (Ivy was five years old at the time), and her mother became involved with a new man who doesn’t care for kids. As the new story opens, Ivy has come to live in her friend’s house, with Prairie and Prairie’s parents as her surrogate family. We want to see her happy. We want the new family to blend together and live, without problems, happily ever after.

But life isn’t that simple.

Ivy is a tough little girl. Not outer-tough, as in swaggering or loud or rebellious. Her toughness is a strong inner core, and she needs every bit of strength when her mother decides she should come “home” again.

Ivy Blake’s “education,” like the education of many famous characters in literary history, takes place only partly in school. The lessons she learns and the places and people who provide the lessons – Ivy herself sometimes seeking them out – form the structure of this compelling character-driven novel.

Recently I was surprised to see Betty Smith’s  A Tree Grows in Brooklyn, published in 1943, called as a YA novel. It was not written or intended as such. When the book was released, in fact,  the publisher and reviewers were at some pains to assure potential adult readers that certain passages were not thrown in for gratuitous shock value, that their frankness was necessary to convey the truth of Francie’s world.

Since then, fiction for young people, like the world in which they find themselves, has fewer protections against life’s harsher realities. Ivy Blake is not subjected to physical violence, nor does the book depict overt sexual episodes, so if some reviewers find it occasionally tough sledding, they are no doubt responding to the emotional tone: Ivy has times of happiness and of hope, but she also experiences completely rational fear and despair.

Even while we worry about what will happen to her, though, we have faith in this young girl. We’re on her side, and reading her story, we feel she is someone we would like for a friend. I am confident that readers from 10 to 99 will share this feeling.

Michigan author Ellen Airgood delighted bookstore customers in Northport when she came down from the U.P. to bring us South of Superior four years ago. She will open the 2015 season of author visits at Dog Ears Books on June 17, at 7 p.m. Don’t miss her!

Looking forward to this NP debut of Ellen's next book! Should be a big event for Dog Ears! I remember how much everyone enjoyed her reading and discussion when she came for her first book, South of Superior.

Indeed, Karen! Ellen is a lovely writer and a lively guest!