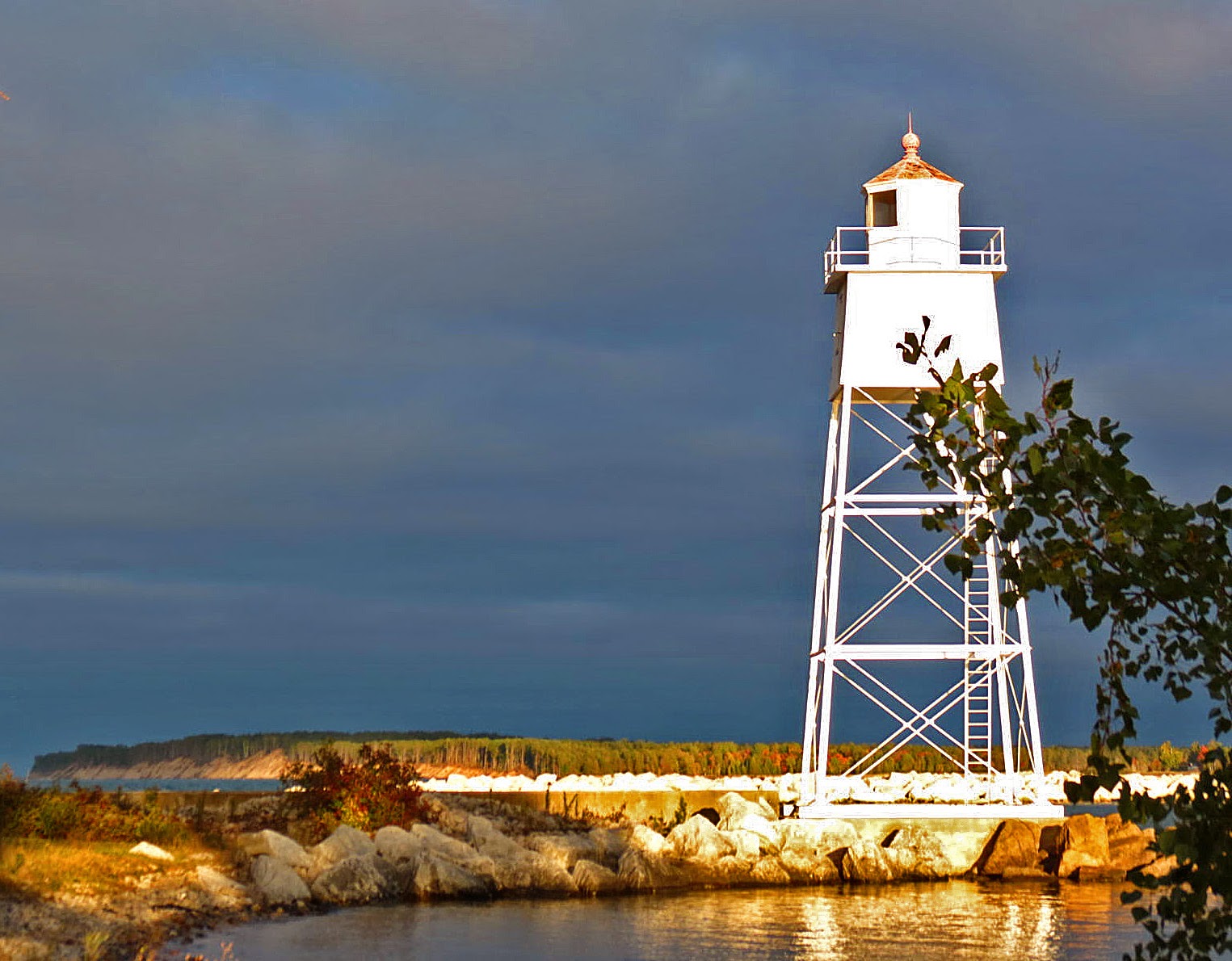 Grand Marais could be a sister city in the U.P. to Northport in many ways: the year-round population is about the same; school population similar (with school struggling to stay open); tourism helps to keep the town alive; and recent infrastructure improvements are starting to point in an even more positive direction. 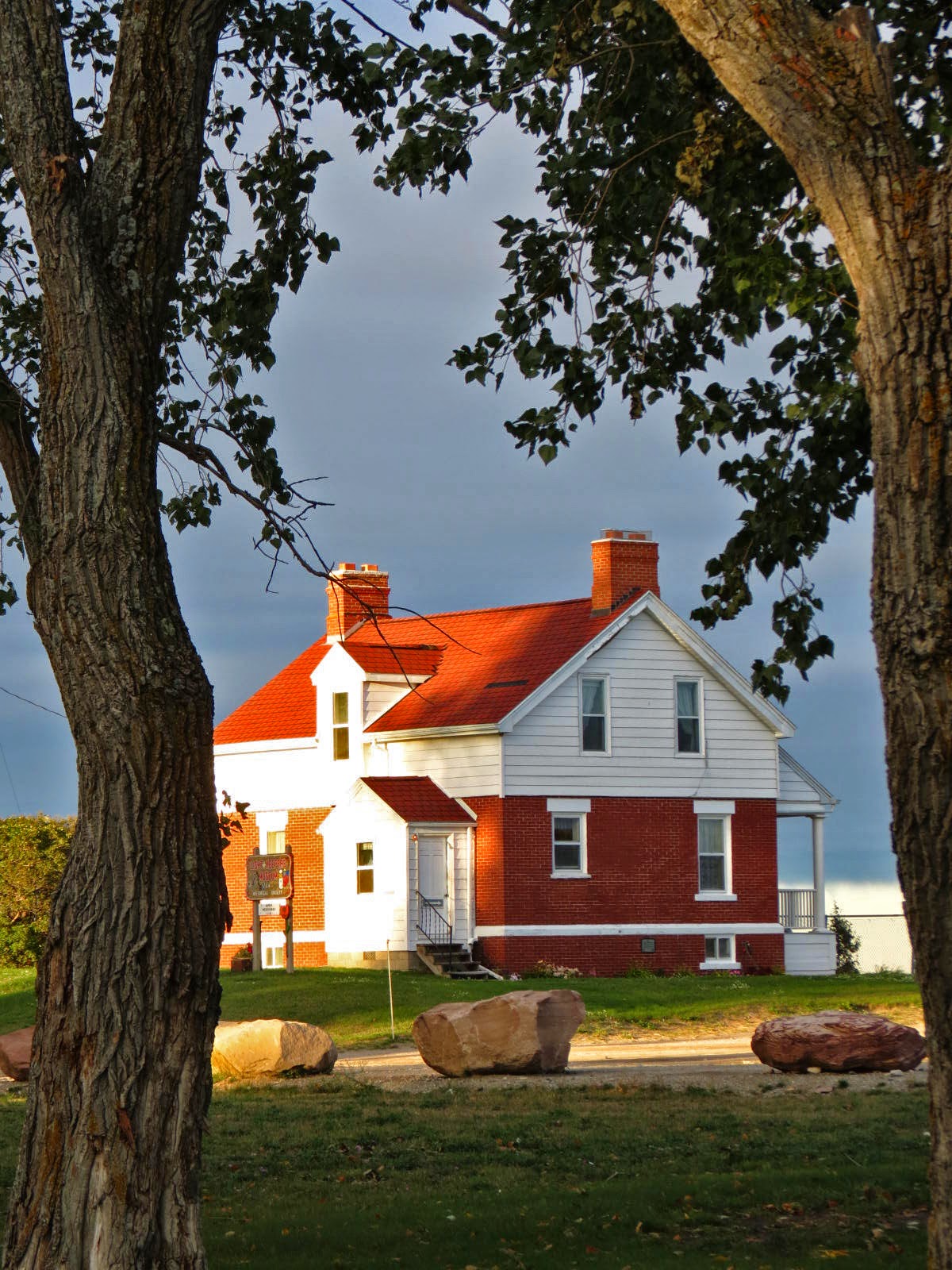 Two years ago in Grand Marais, the streets were torn up all over town for the installation of new water lines, and all day long huge trucks and heavy equipment moved through town, some but not all of it involved in the water project –because at the same time there was a second huge project underway, the building of a new breakwall, which now stretches over halfway across the outlet to protect the little Lake Superior town and its harbor. We’ve always enjoyed going out to the end of the point. Enormous cottonwood trees stand and the old lighthouse and related, well-kept buildings stand straight and tall. The breakwall is a big change; the buildings are reassuringly the same, and most of the views toward town and southern shore of bay haven't changed too much. 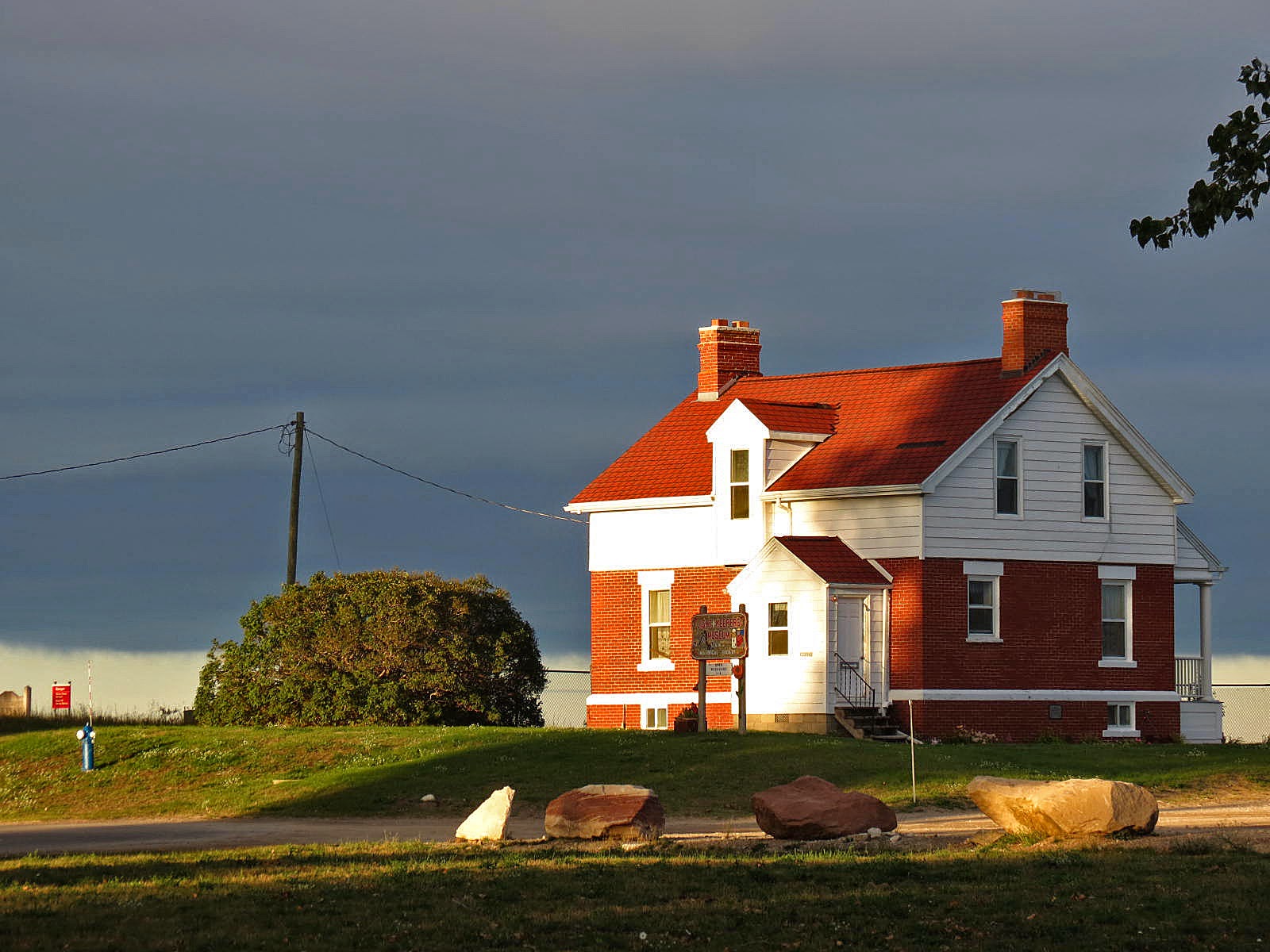 On the way out to the point, for years, we’ve stopped to look over a couple of old boats, ‘Arbutus’ and, more recently, ‘Vagabond.’ David fell completely in love with ‘Vagabond’ in 2012 and wanted to get some better (more representative) photographs than the ones I’d taken then, but a surprise awaited us. ‘Vagabond’ was off her cradle and back in the water! 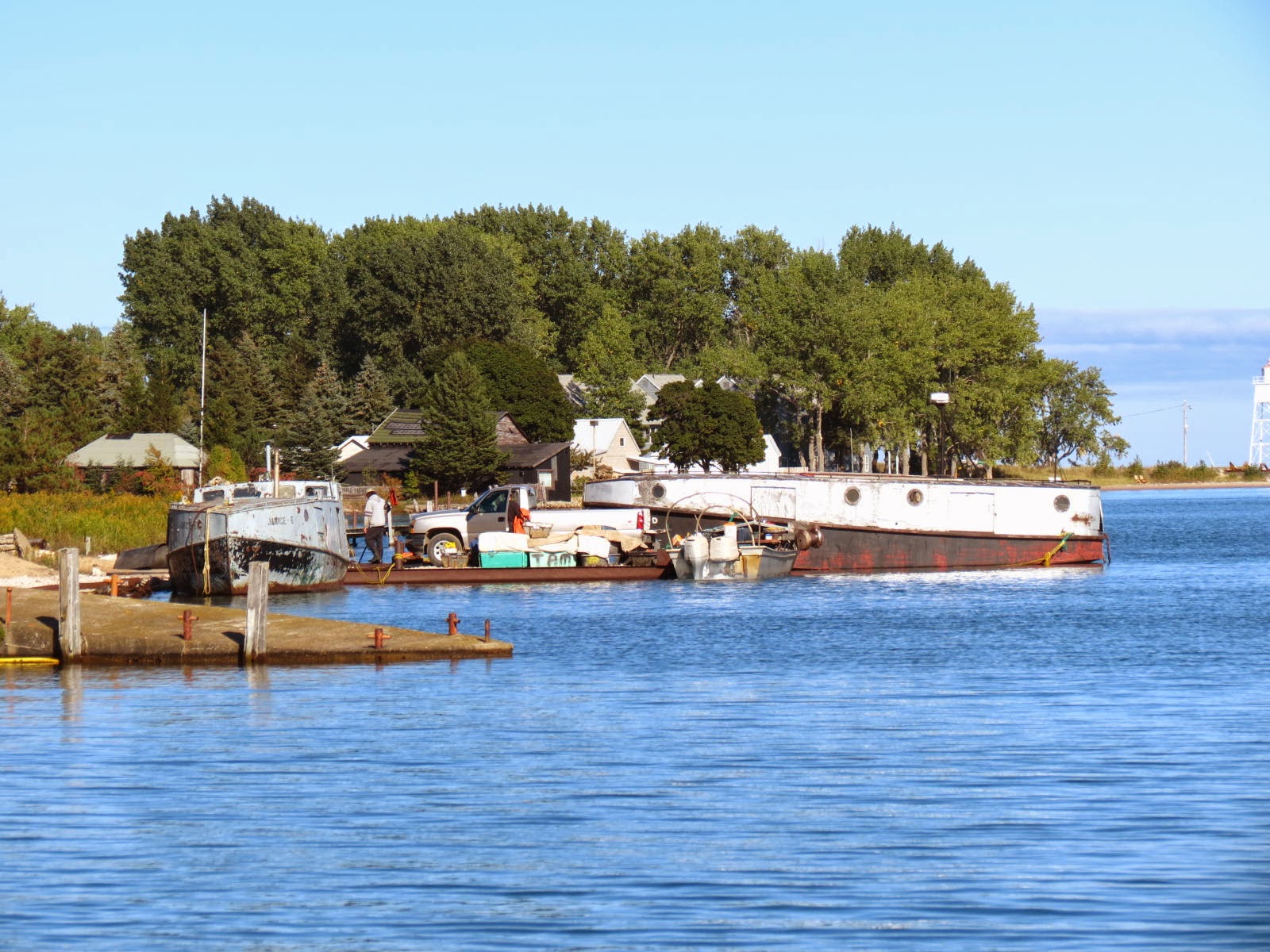 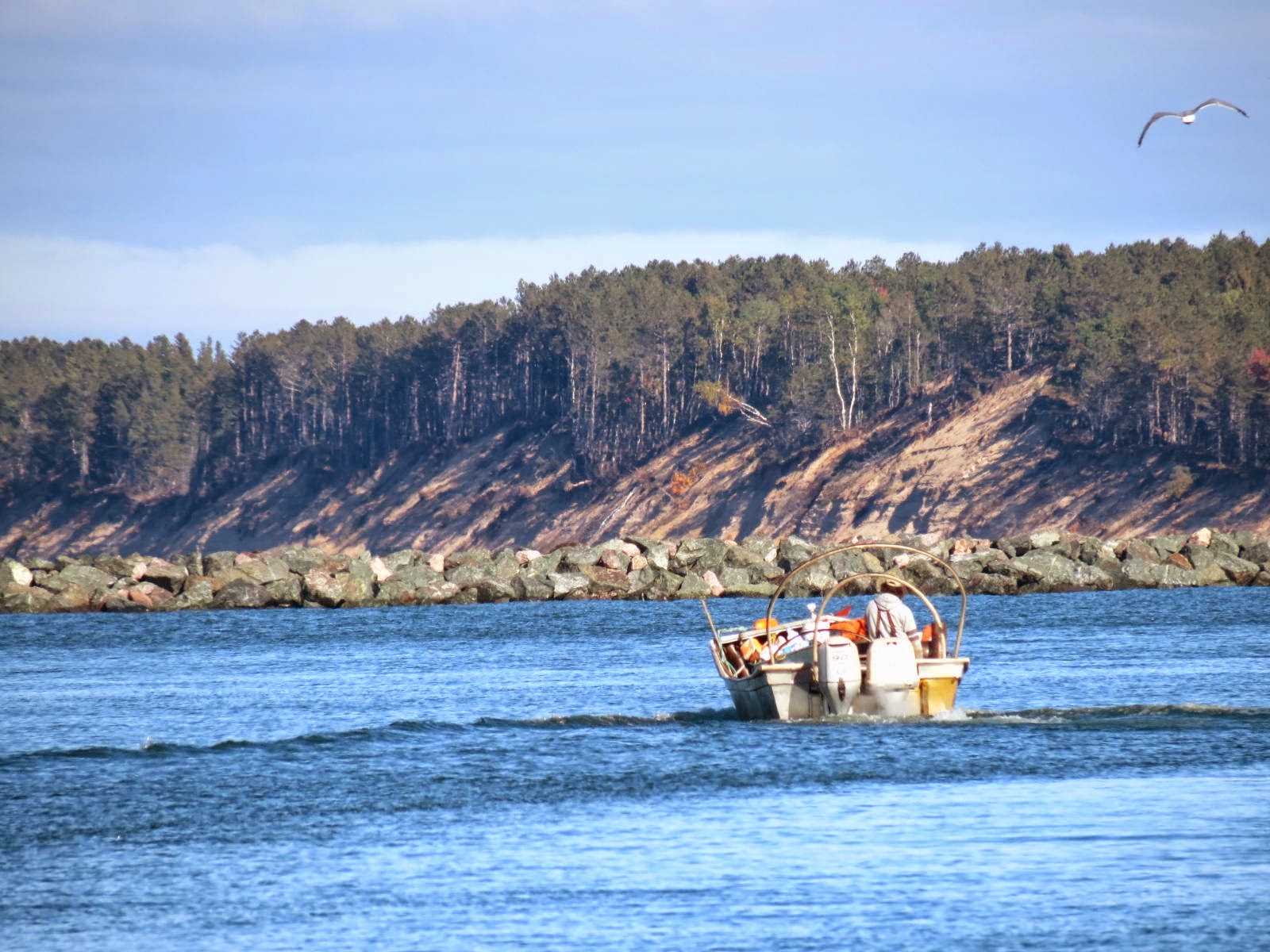 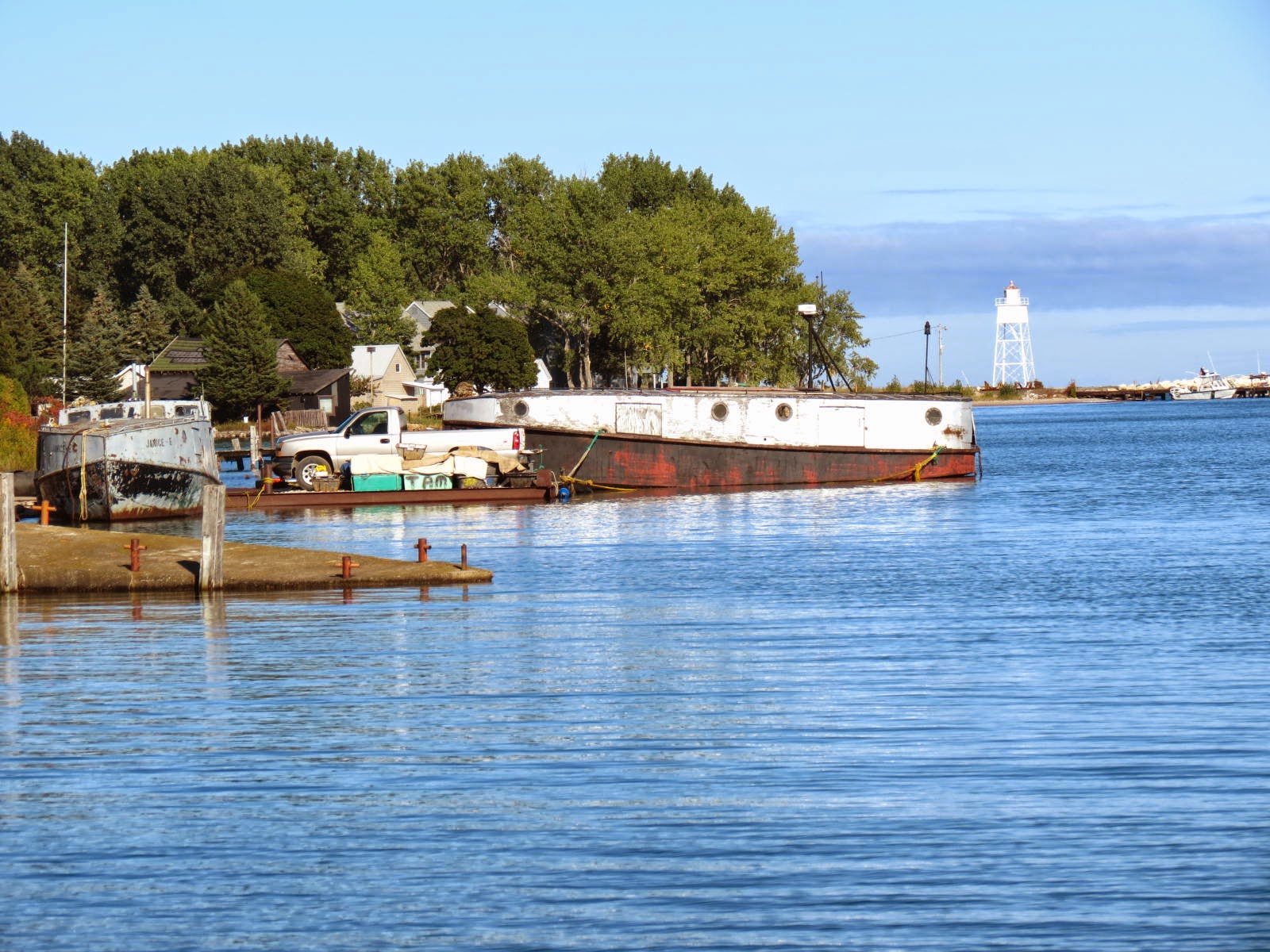 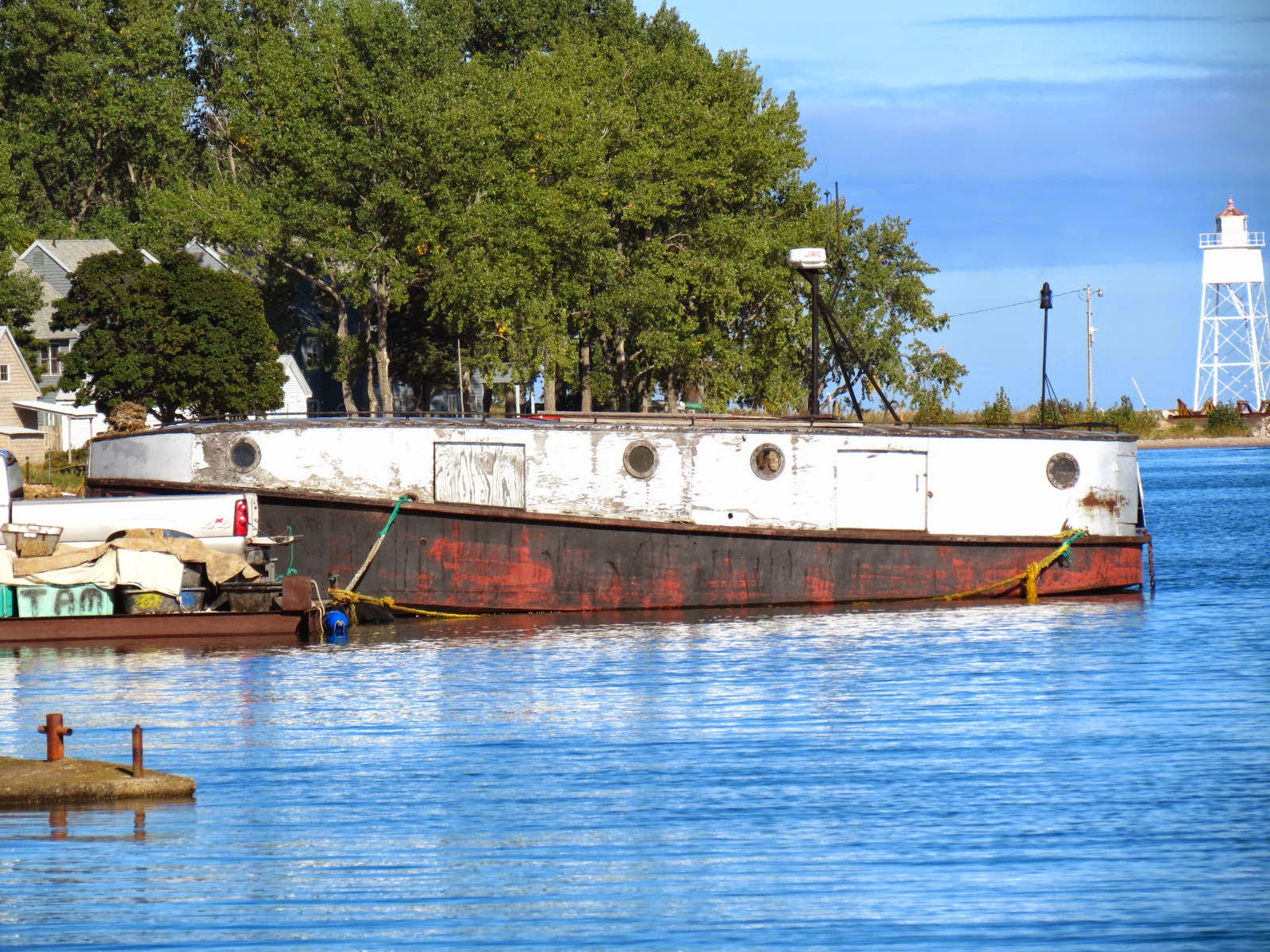 'Vagabond' was built in 1948 in Manitowoc, Wisconsin, its hull constructed of postwar surplus submarine steel, so despite the punishment it's taken over the years it shows little or no damage. Fitted out now with a rebuilt diesel engine, the old fishing boat will soon be fishing again, but last week the commercial fishermen had taken that little motorboat you already saw (scroll back up to see that shot again) out beyond the breakwall to brave Lake Superior in the sun.

From out on the point, looking across the water back toward town we can see the motel I’ll always think of as Alverson’s, though it’s now called the Beach Park Motel, and in another direction the shore reaching to the east where H58 goes out to the cemetery and the beach where plovers nest in late spring and where we have spent so many lazy hours in years past, lying on towels and reading and napping. H58, if you continue to follow it east, quickly runs out of good pavement and not long after that turns to washboard as it follows Lake Superior to Muskellonge Lake, where some friends of ours live year-round, another couple we know spends half the year, and still other friends usually go for a week or two in August. 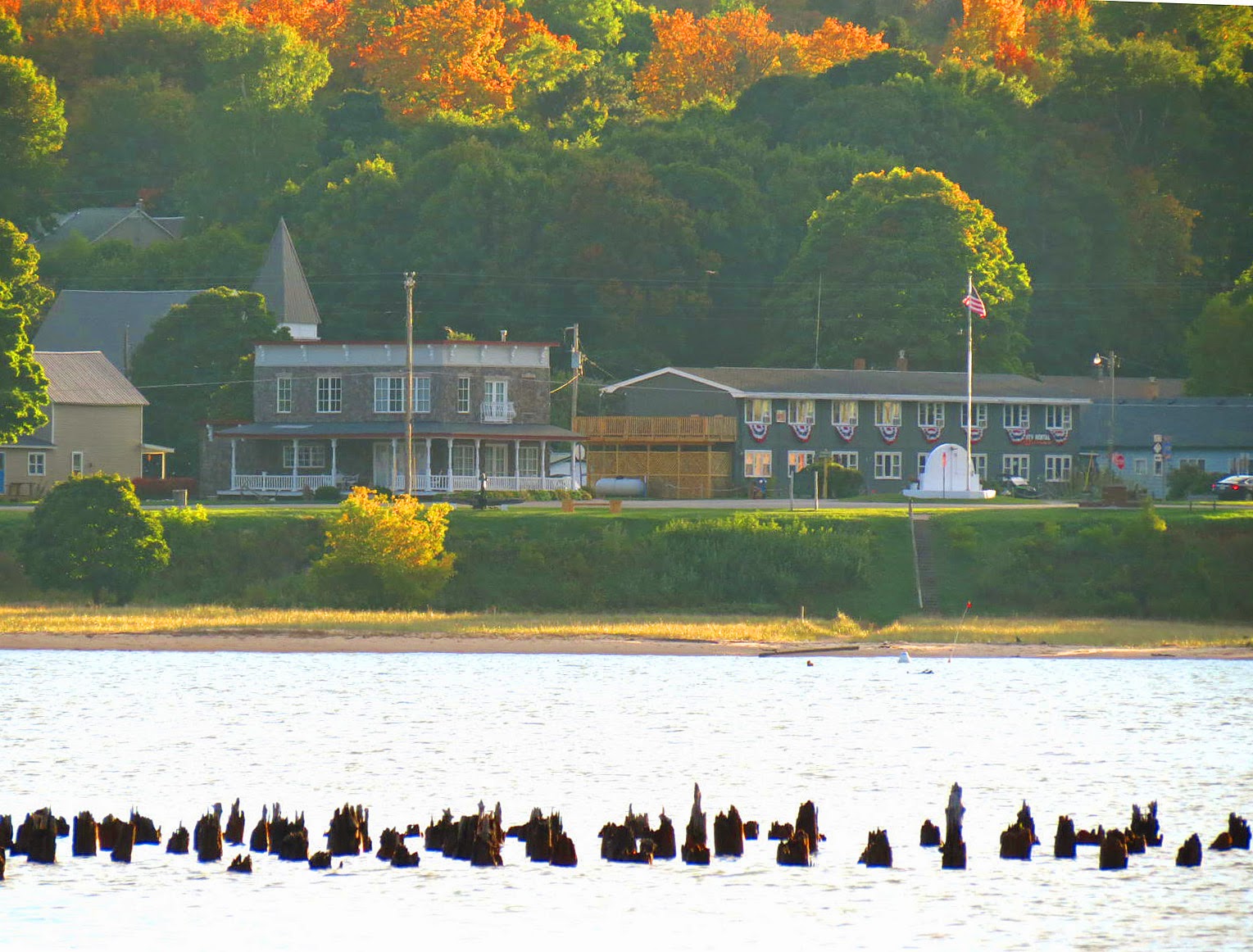 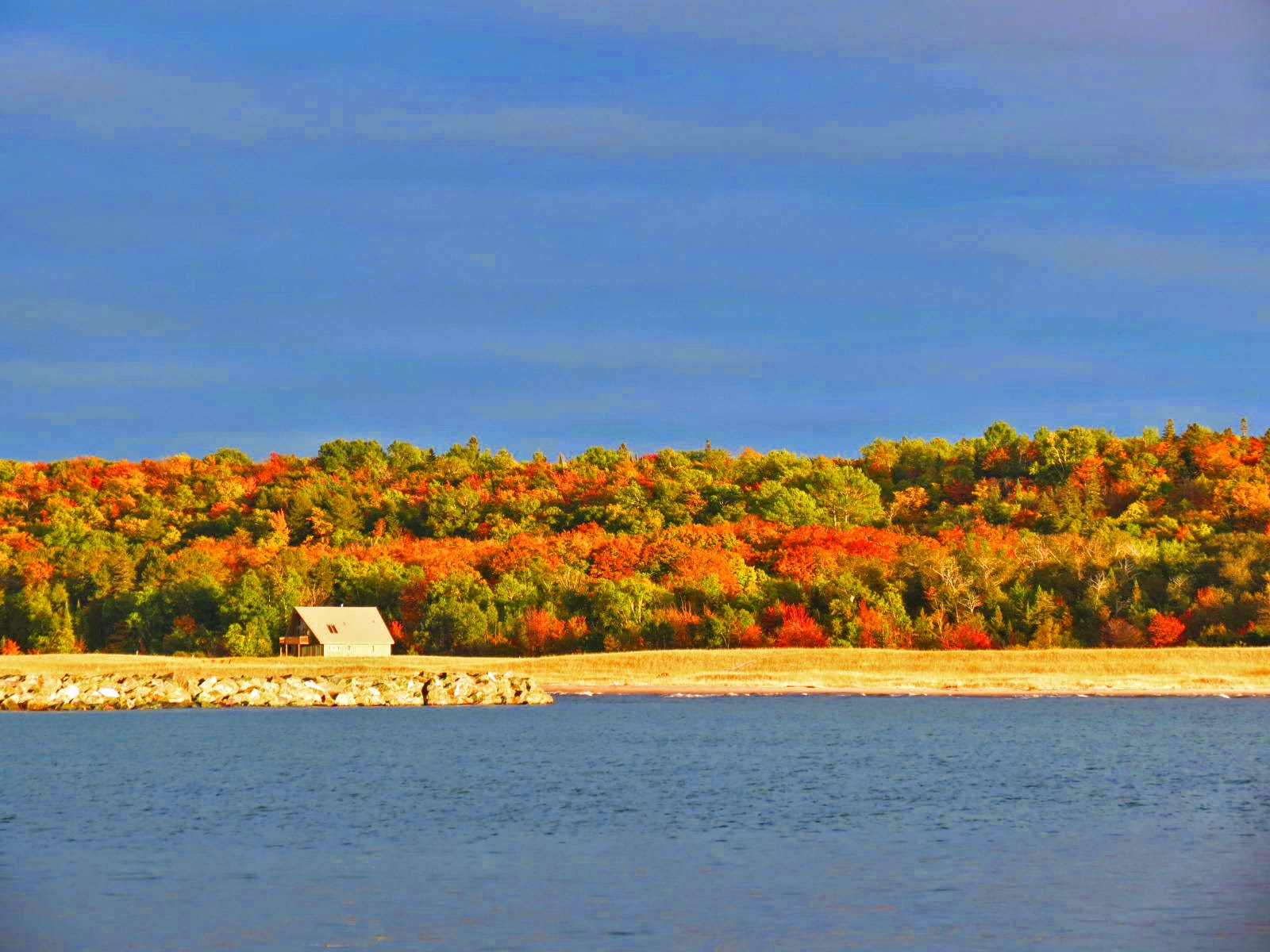 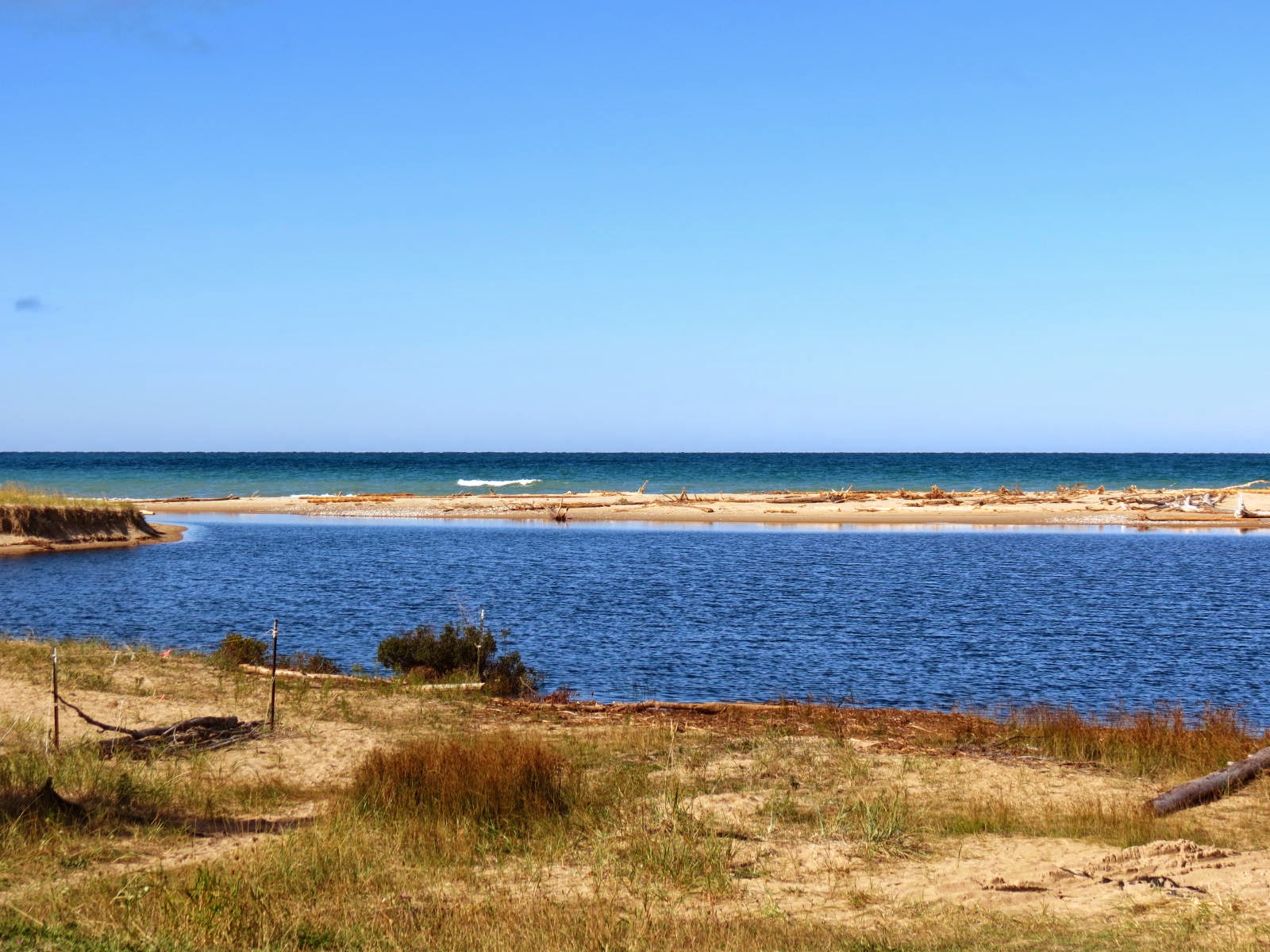 But back to the beach by the cemetery road’s end. It is never the same two years in a row. The mouth of the Sucker River comes out not far to the east, and every year the cold, tea-colored river has cut a different meandering channel along the shore. One year, with our old dog, we waded through waist-deep water (she dog-paddled) to a long, high arm of hard-packed sand the river had left to face Lake Superior on its own. There I found dreikanters the size of acorn squash (people have found larger ones!), and it seemed another world, like the stretches of exposed seabed around Mont St.-Michel when the tide goes out. This year we found the beach at the road’s end greatly reduced (as is true also of the Lake Michigan beaches in Leelanau County and elsewhere, levels of all the Great Lakes up considerably this year after last winter’s heavy snowfall) but, as always, fascinating scenes greeted our eyes. 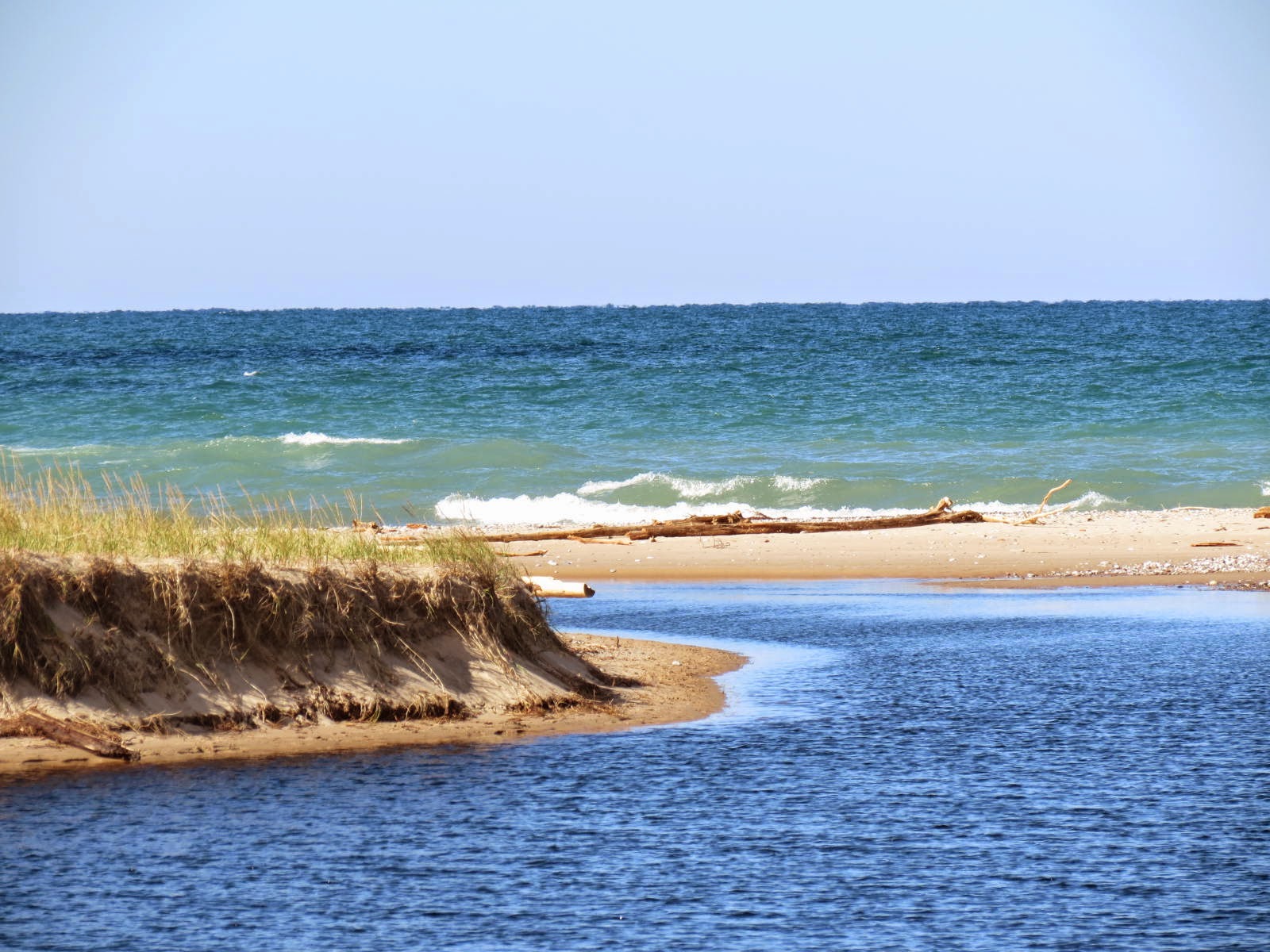 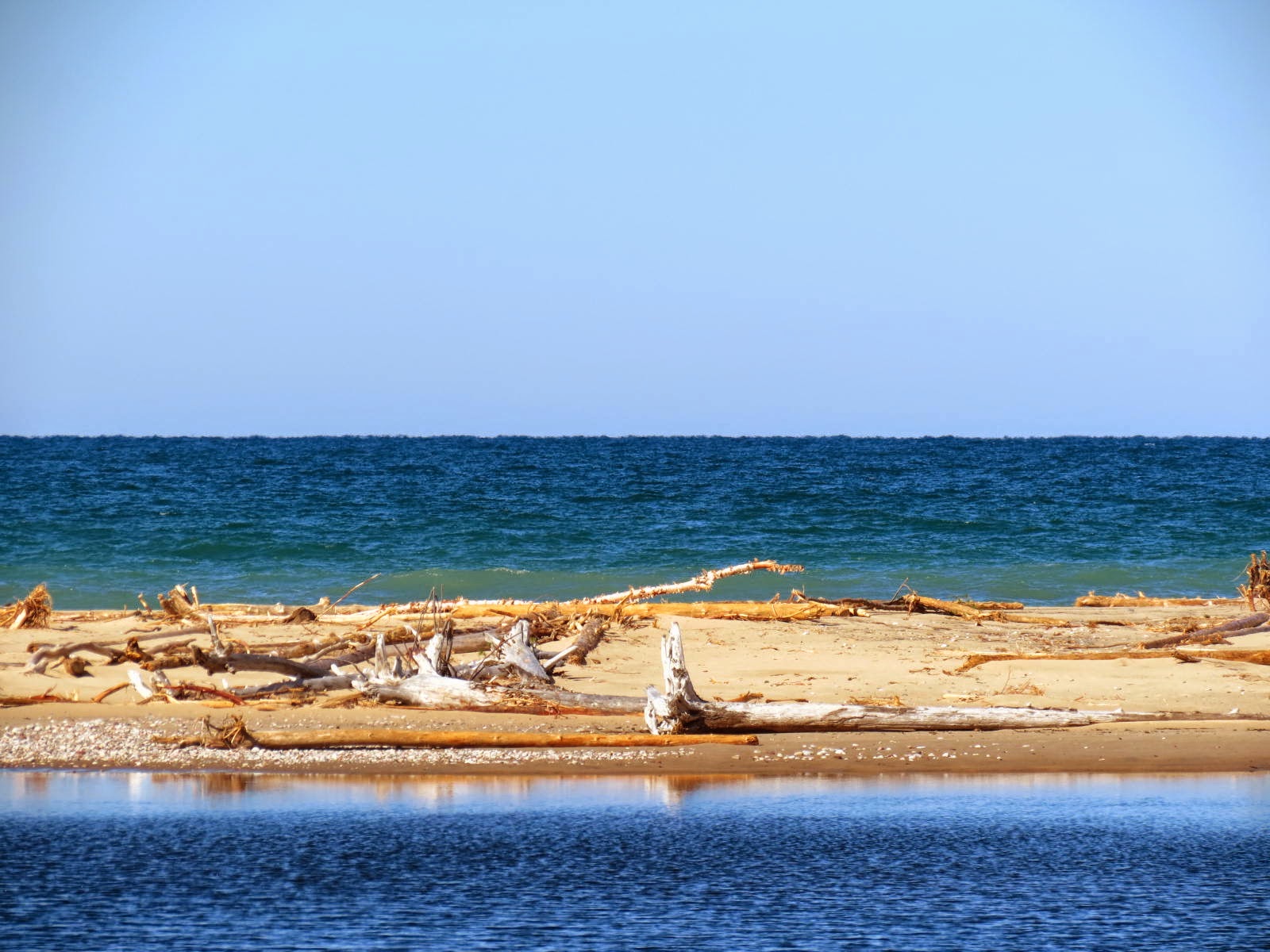 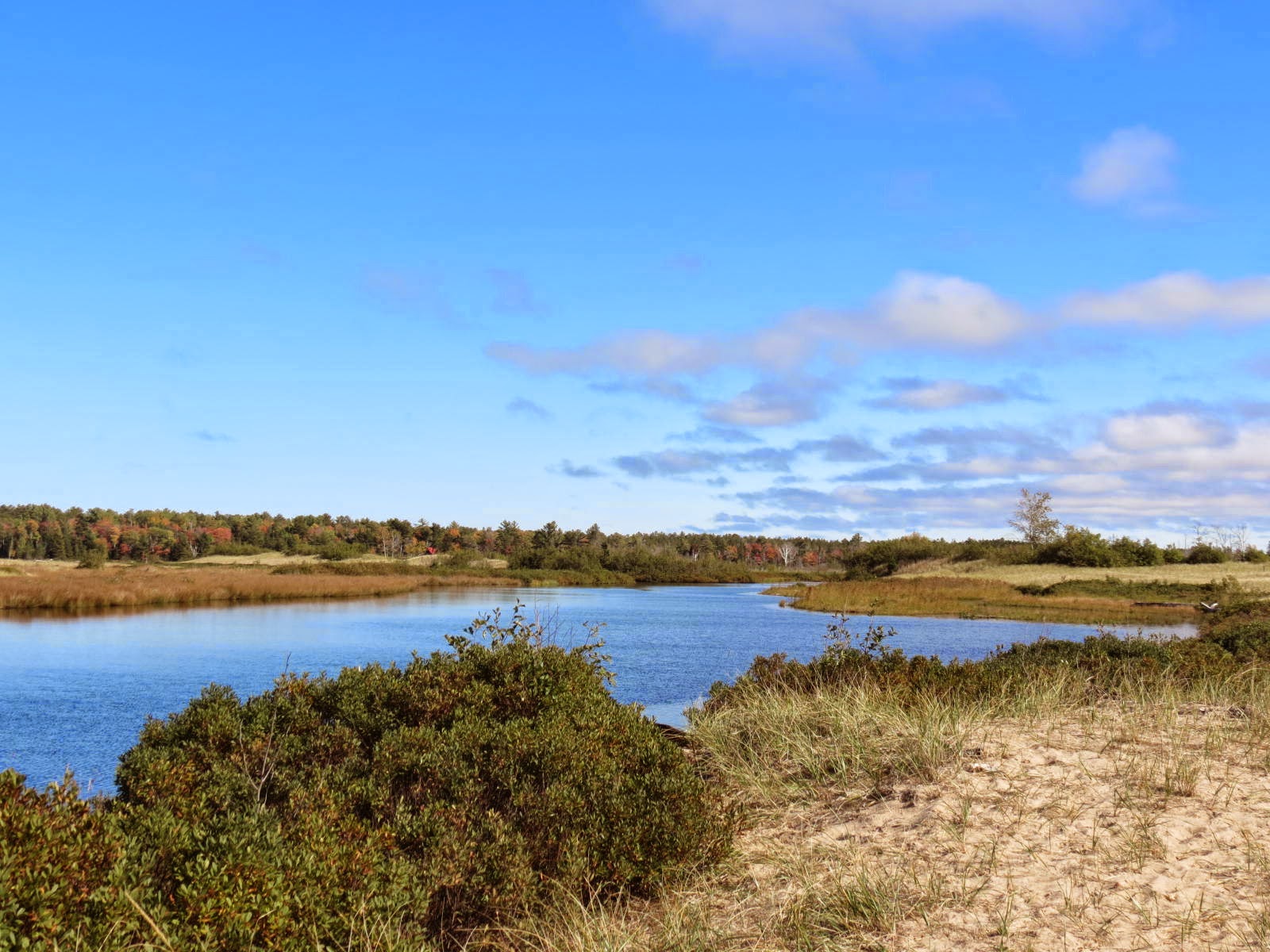 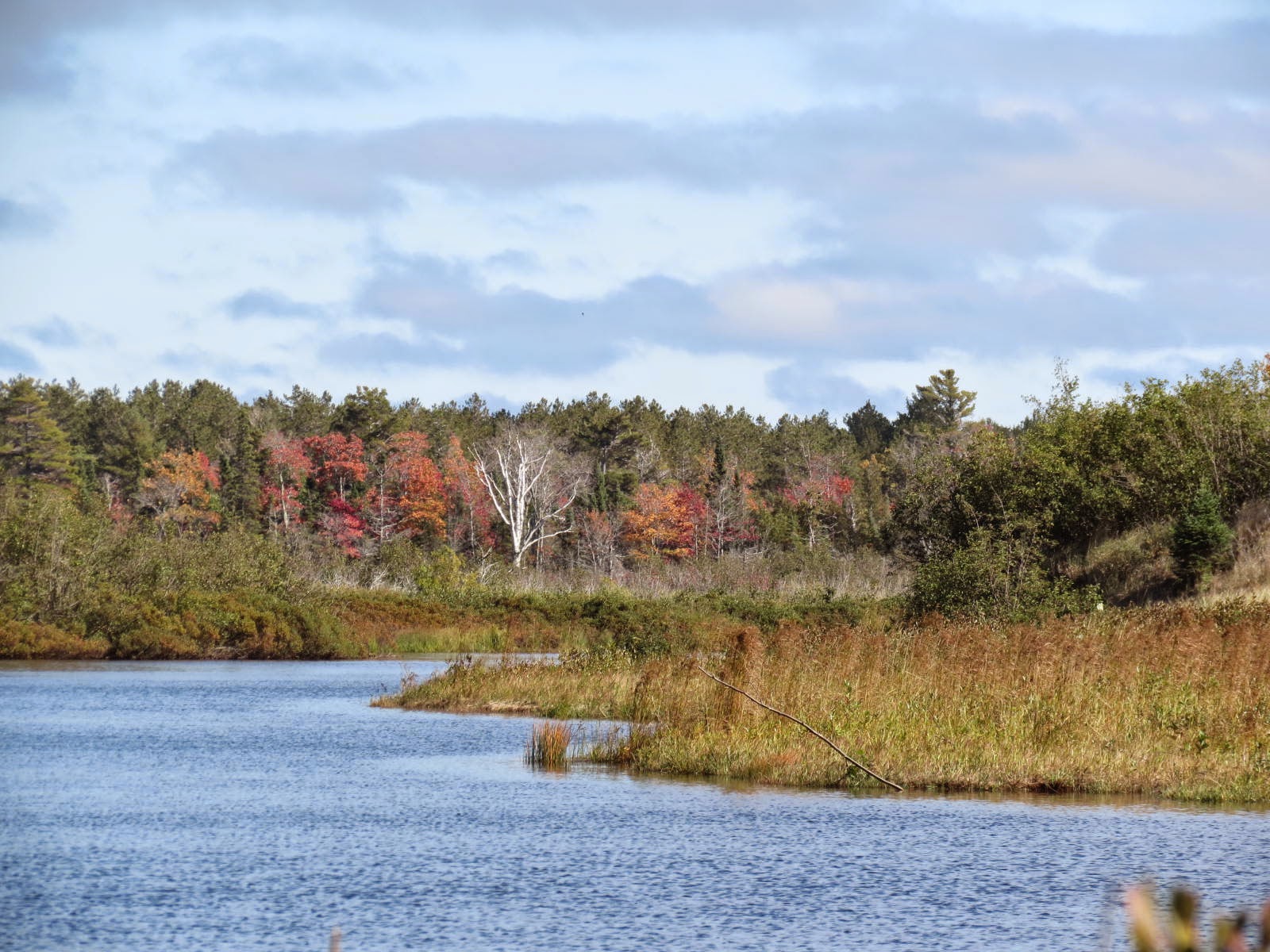 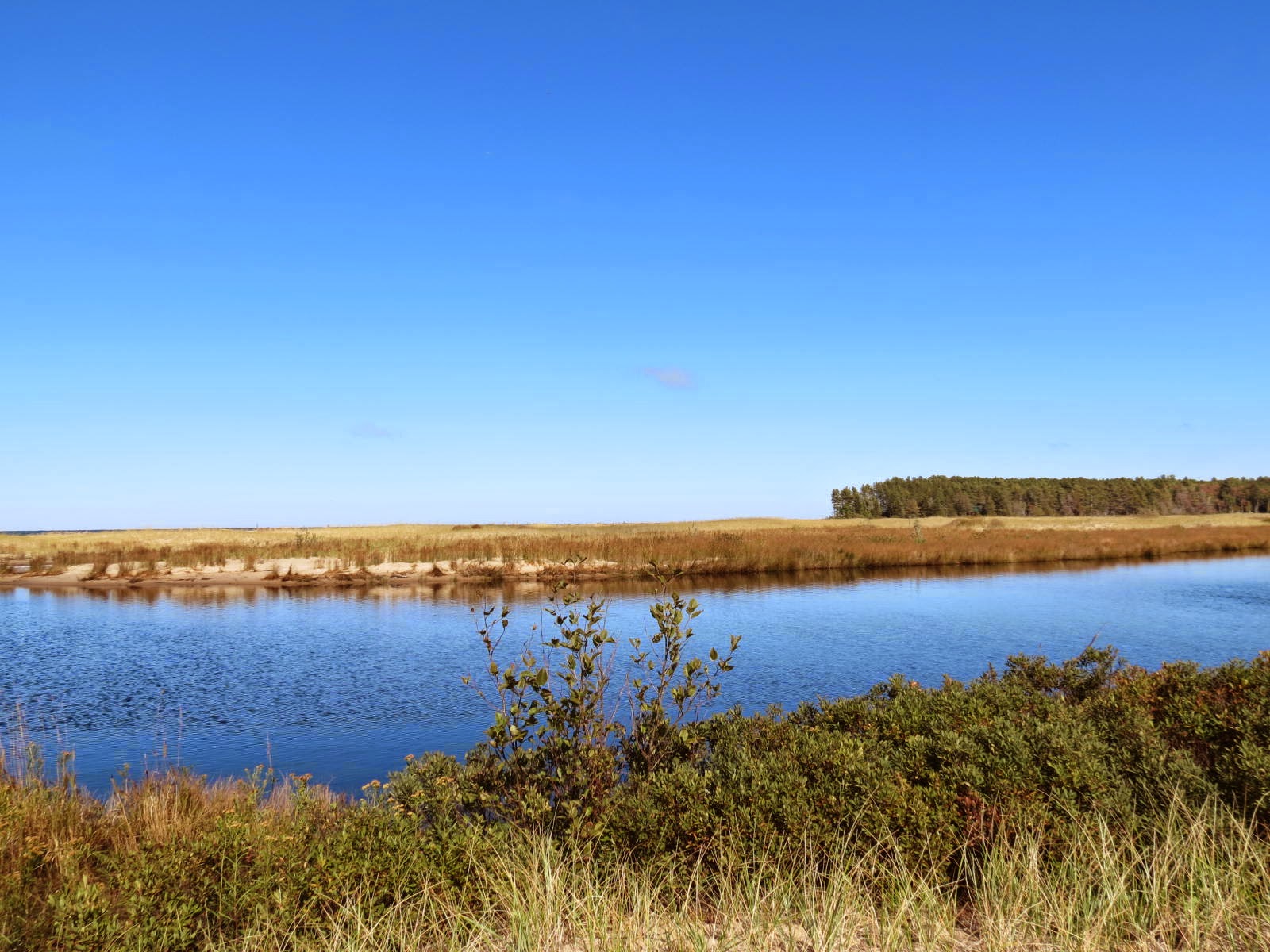 To say that the shoreline changes from one year to another is somewhat misleading understatement, because it is in a state of continuous and ongoing change. A single night may bring crashing storm waves (and crumbling sand bluffs not far to the east), throwing stones and logs and other debris into new arrangements on the beach, and even the light of one day changes so much in a few hours that the views are completely transformed. On this beach one faces Lake Superior directly north, so the low setting sun rakes from left to right and bathes the scene in magic. Even the drive from town to the beach is magical in that evening light. 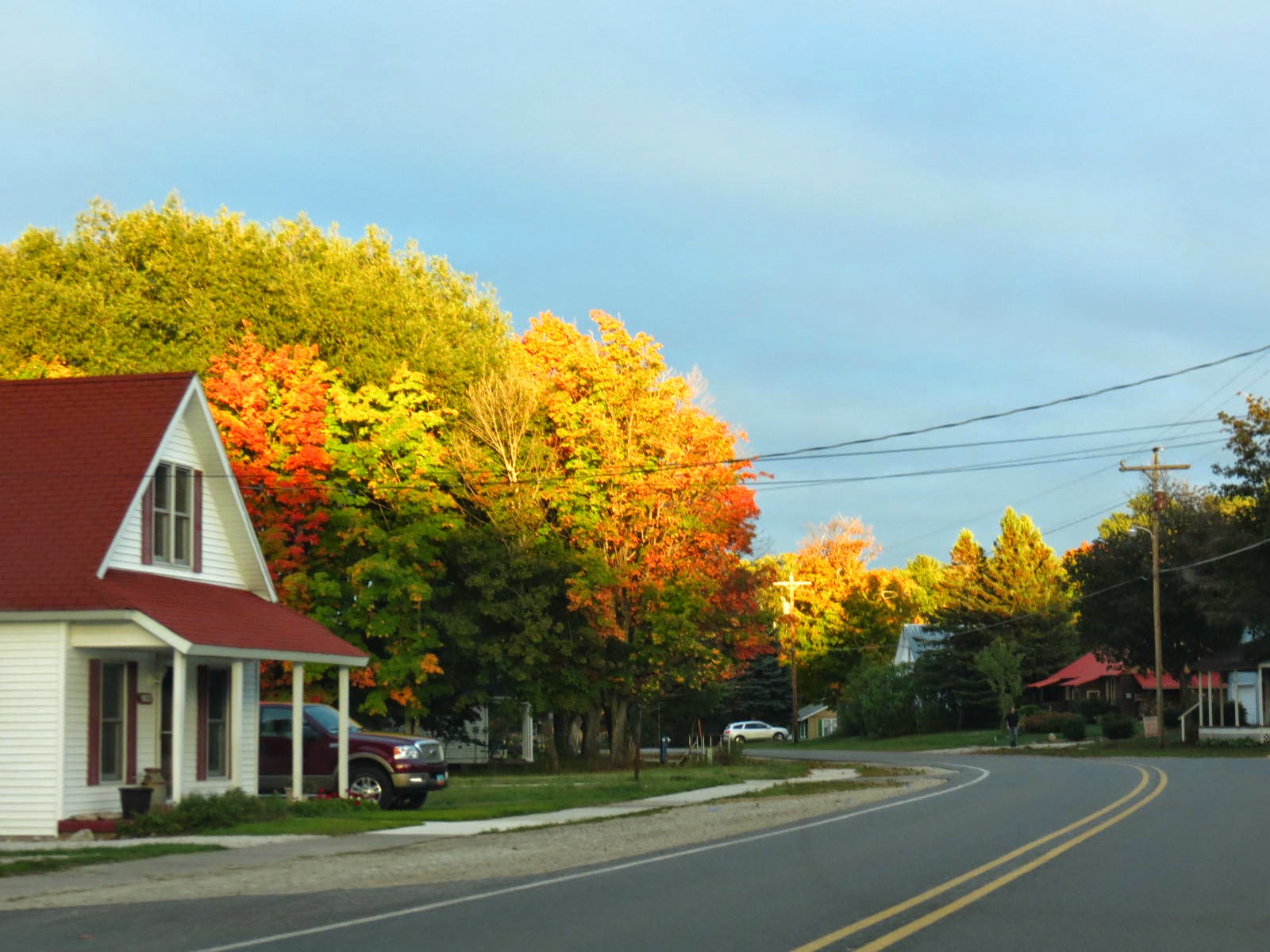 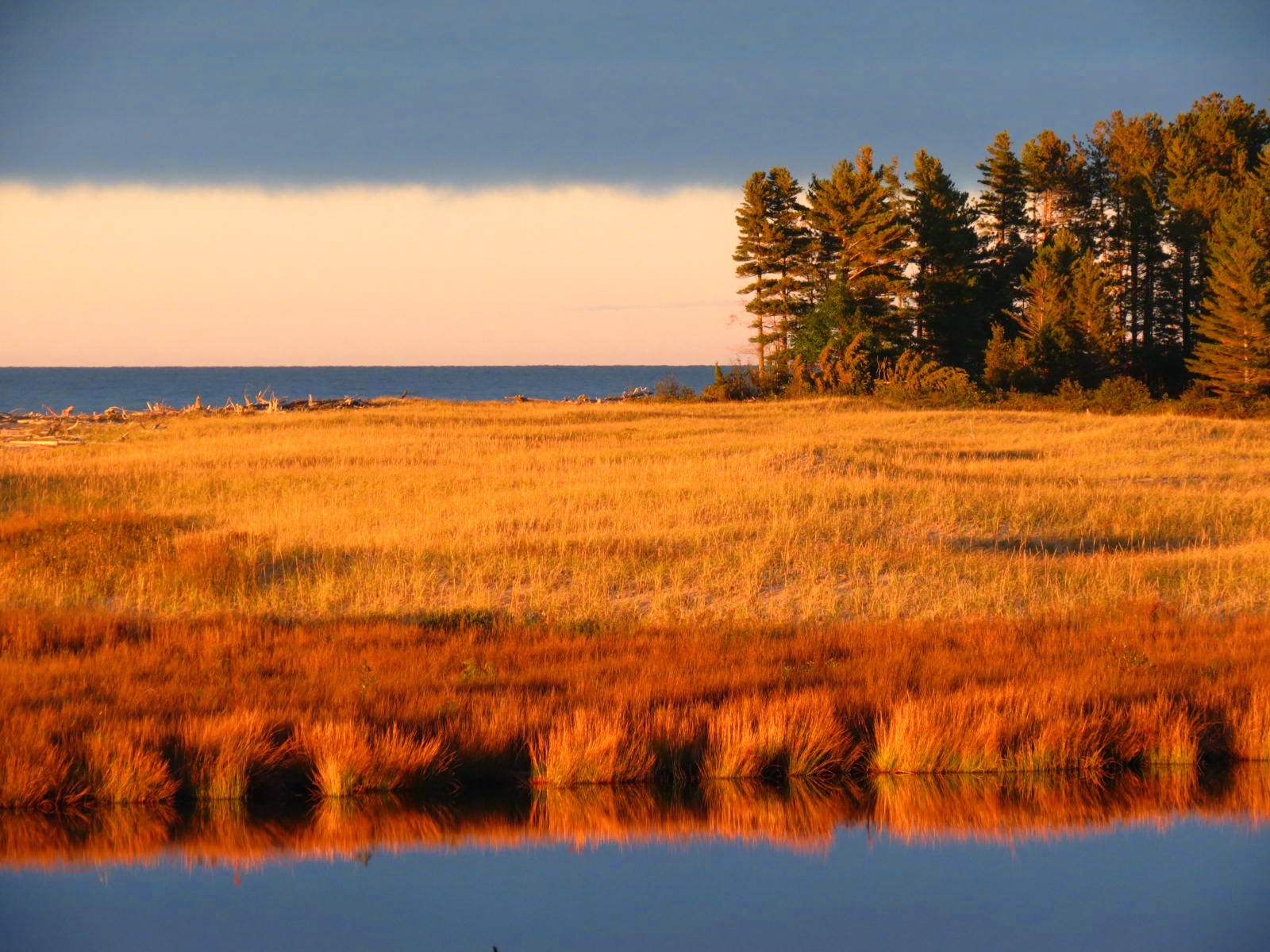 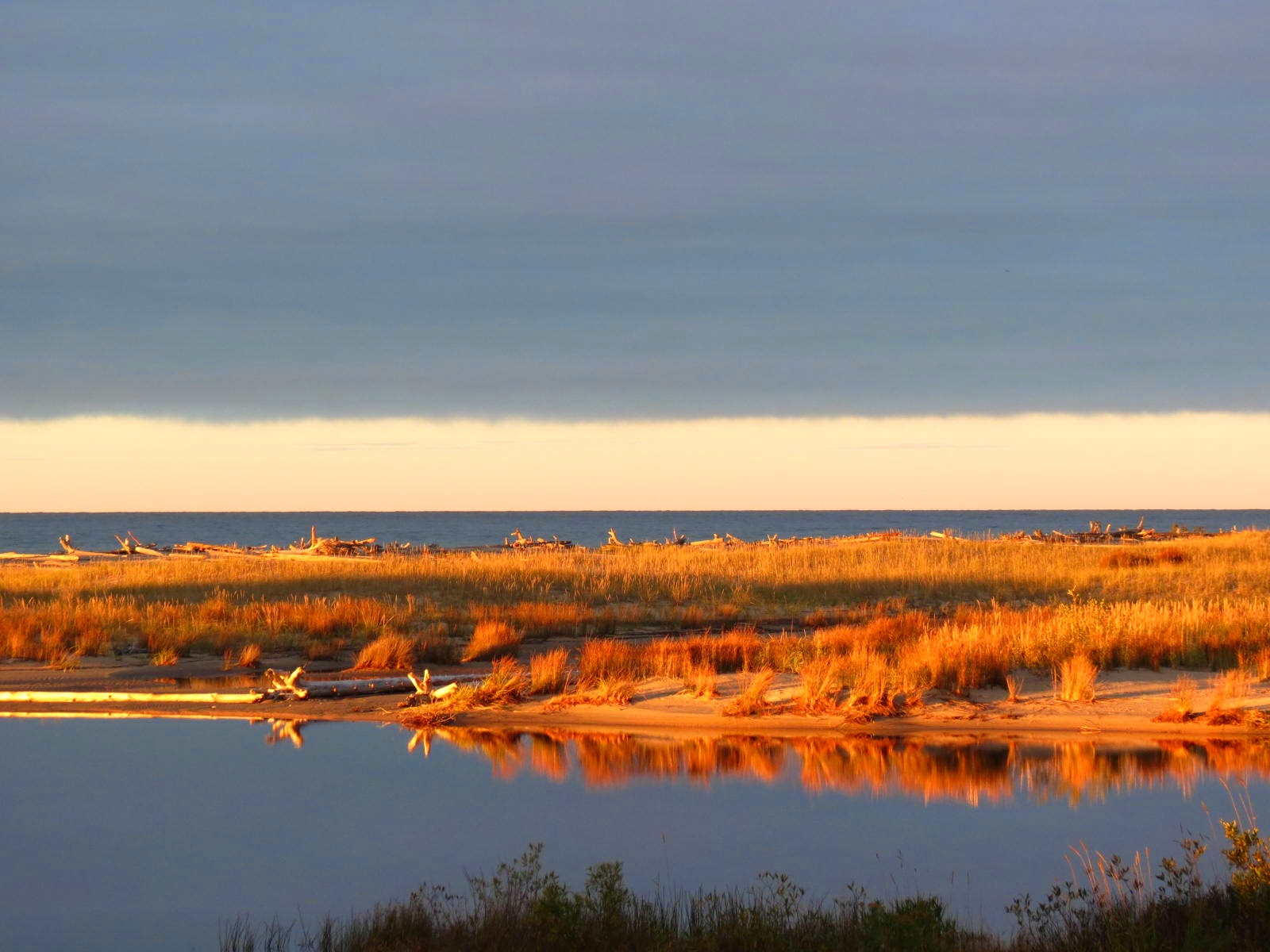 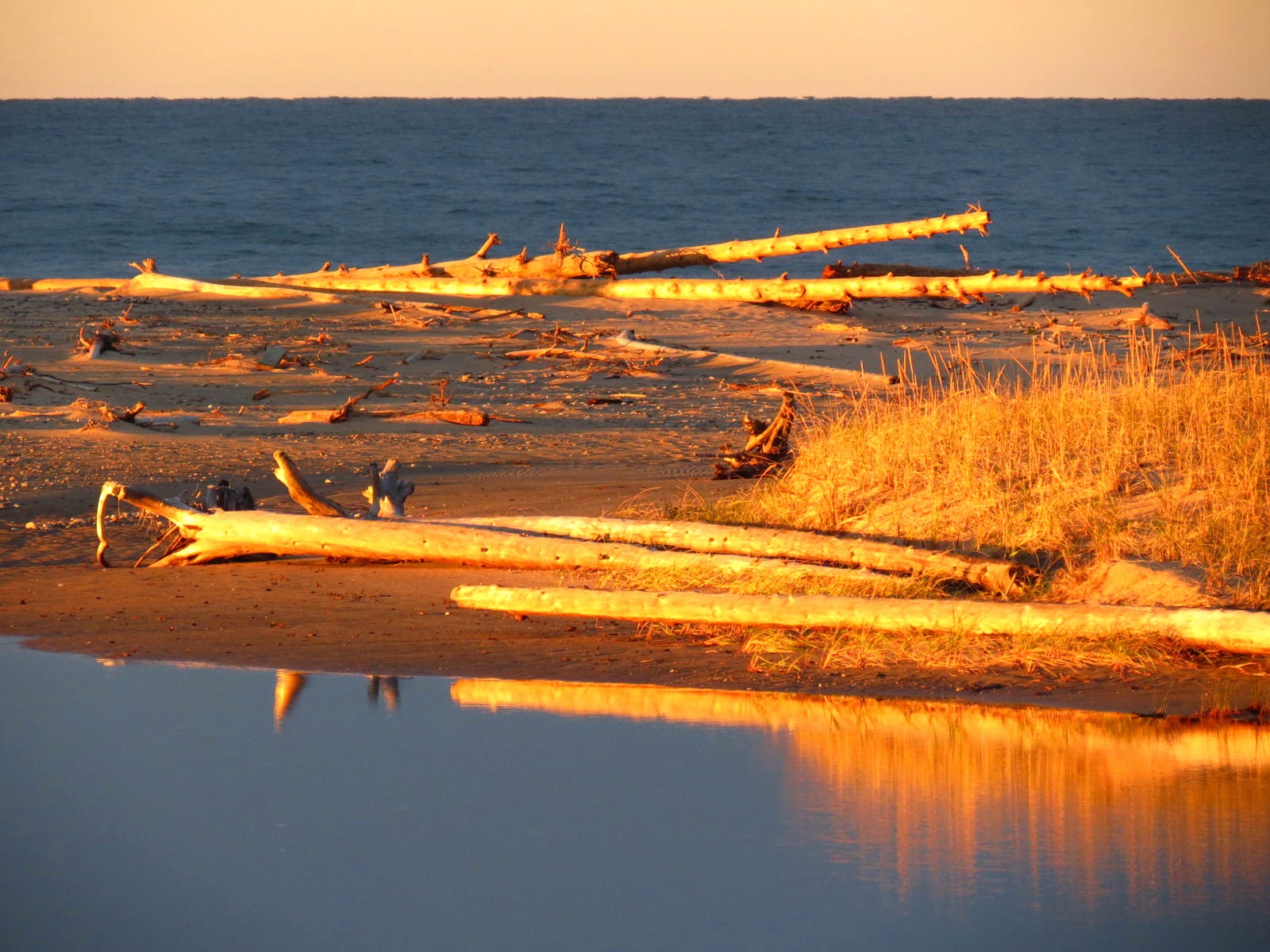 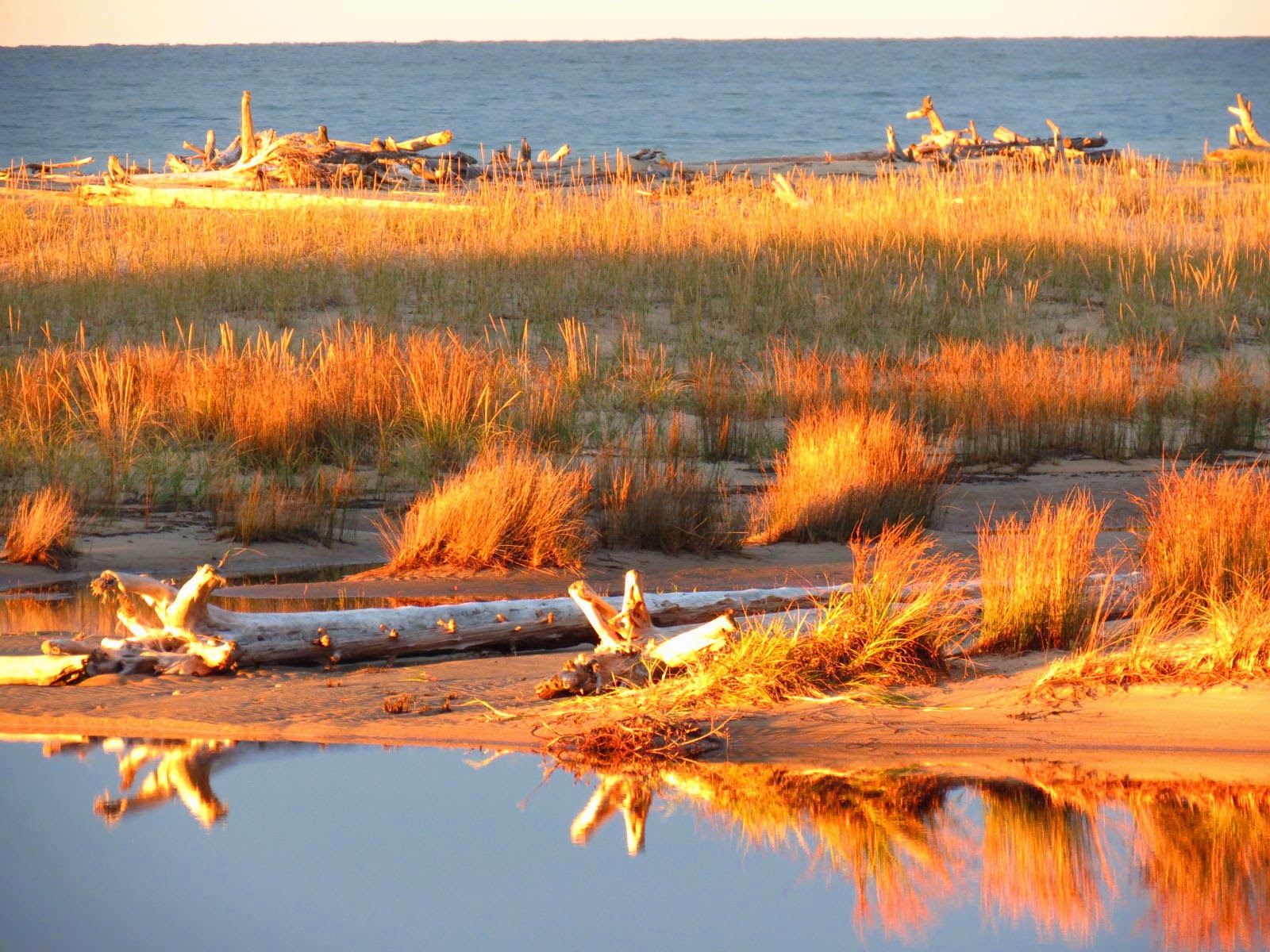 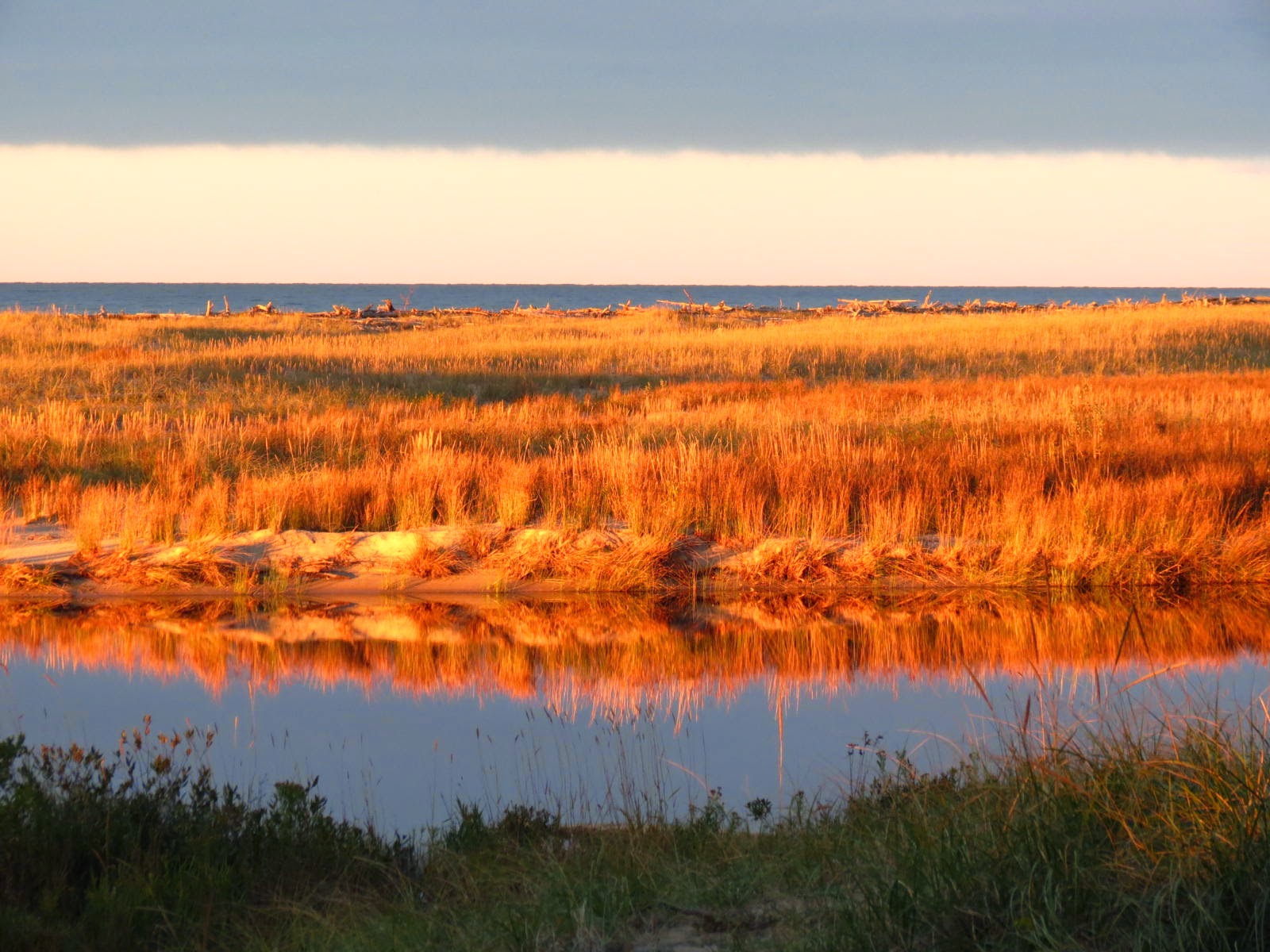 I don't know if you're a good writer who takes great photos or a good photographer who writes great stories.

Absolutely gorgeous pictures, Pamela! The color is spectacular, but what I like the most was the variety of skies and clouds you had on your little excursion to GM. Karen

Love the low light shots! I was thinking when I was in Port Washington WI a couple of days ago that it reminded me a lot of a combination Northport and Suttons Bay. Fishing ports up and down the Great Lakes probably resemble each other, it makes me feel right at home and comfortable when I visit along either coast.