Even Stones Are Not Forever


The moving of stones is the course of history, and of rubble and forgetting.
– W. S. Merwin, The Mays of Ventadorn (Washington, D.C.: National Geographic, 2002)

Friends of ours were in Scotland recently. As always when visiting the U.K., they spent quite a bit of time searching for megalithic sites, ruined abbeys, ancient churches, and especially for stone circles. Kilmore Stone Circle, thousands of years old, they had found years ago, hidden away in a dark pine forest, within its own clearing in the forest. On this trip several such destinations eluded them (one obviously fallen victim to the clear-cutting of a pine forest), but they did at last succeed in reaching hidden-away Loch Buie Circle and felt more than repaid for all their efforts. 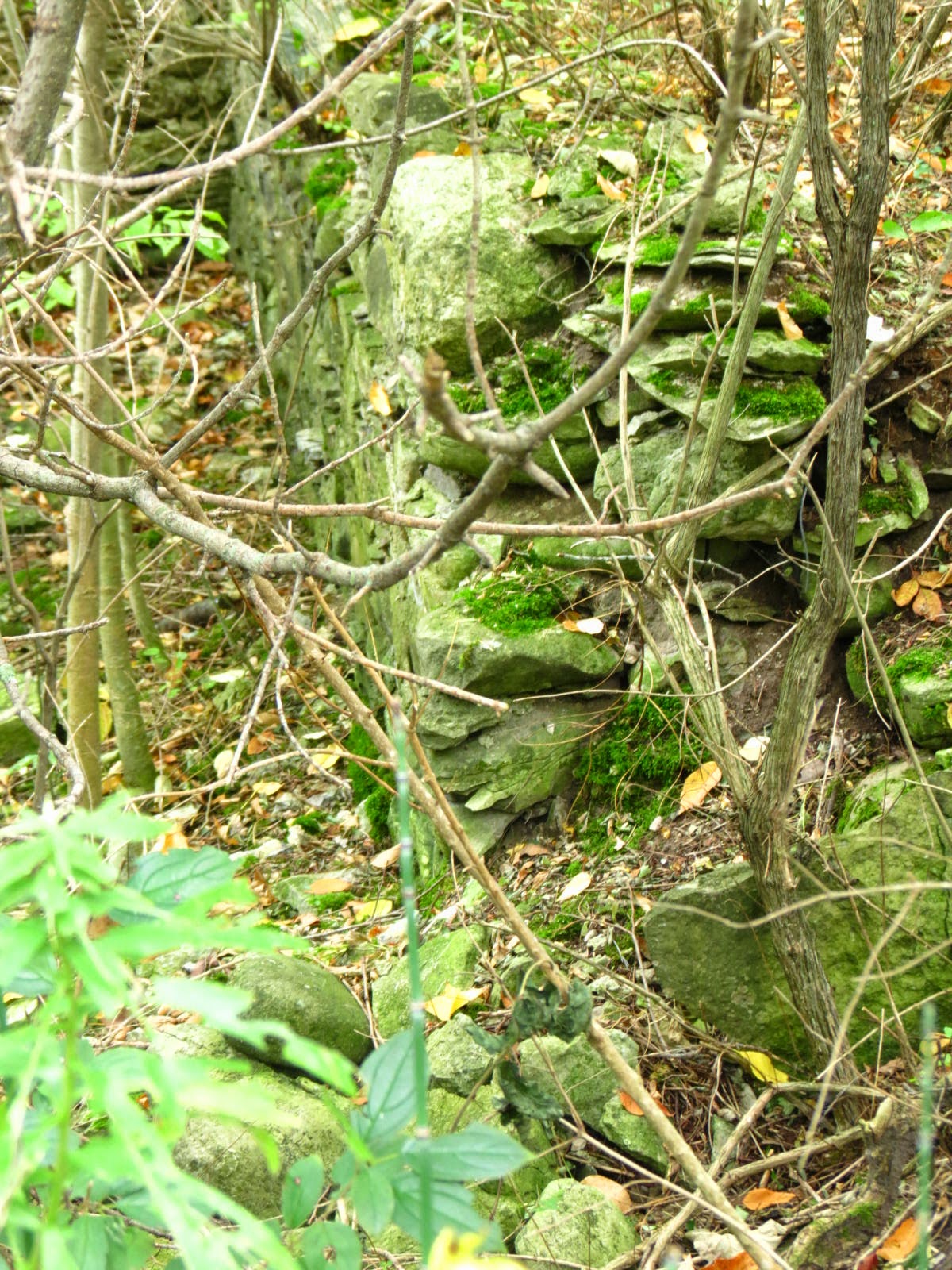 Stone “ruins” in my neighborhood are not ancient by European time measure, but an old farmhouse fallen into its foundation in the 1960s and overgrown since with vegetation gives me some feeling of communing with those who came before us here. Here is one I saw for the first time last Monday, on a walk with a friend. It is very difficult to photograph, overgrown as it is with vegetation. Photograph at left is close-up of one side wall; those below I tried with fish-eye mode to get in more of the walls. 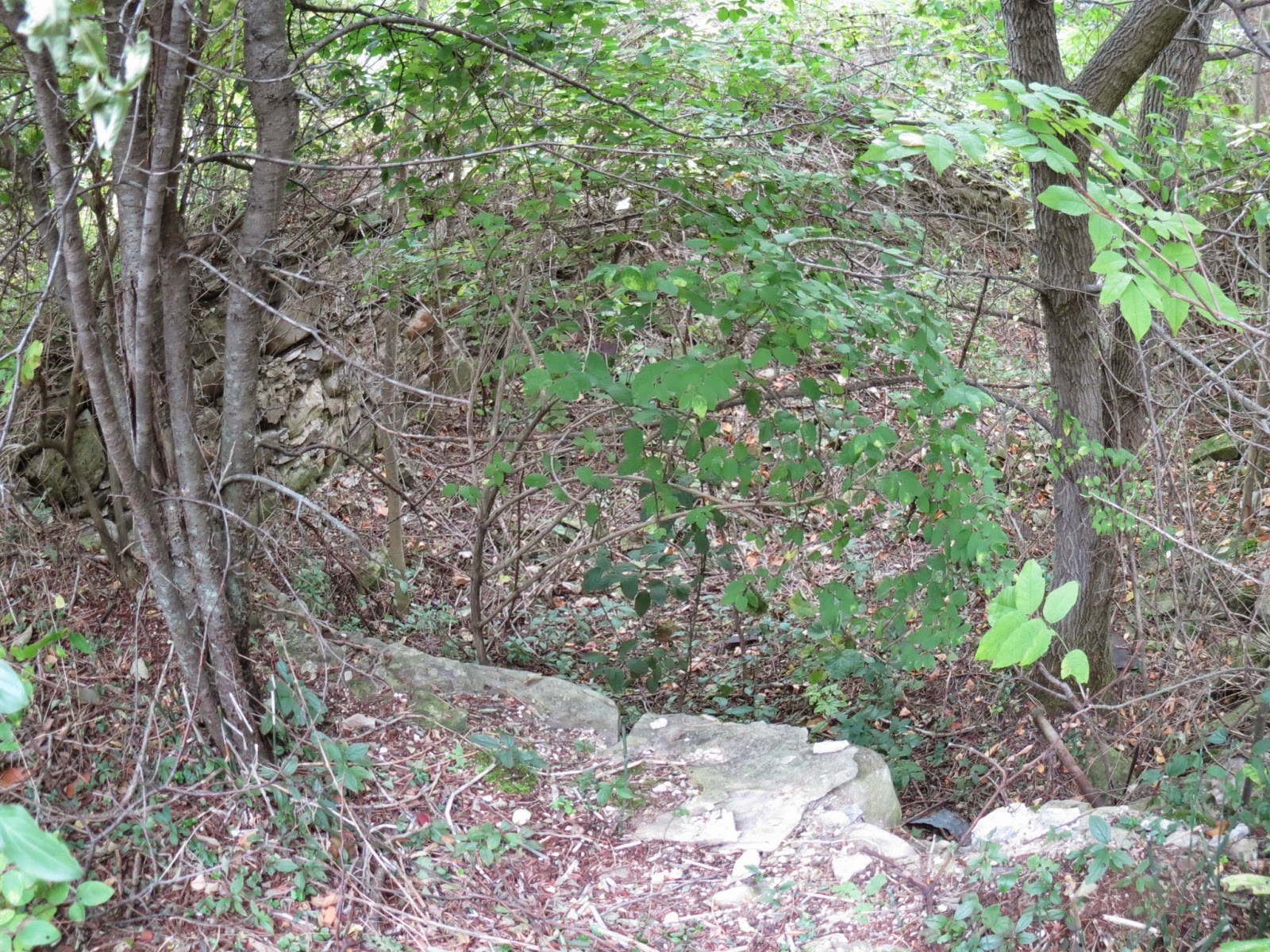 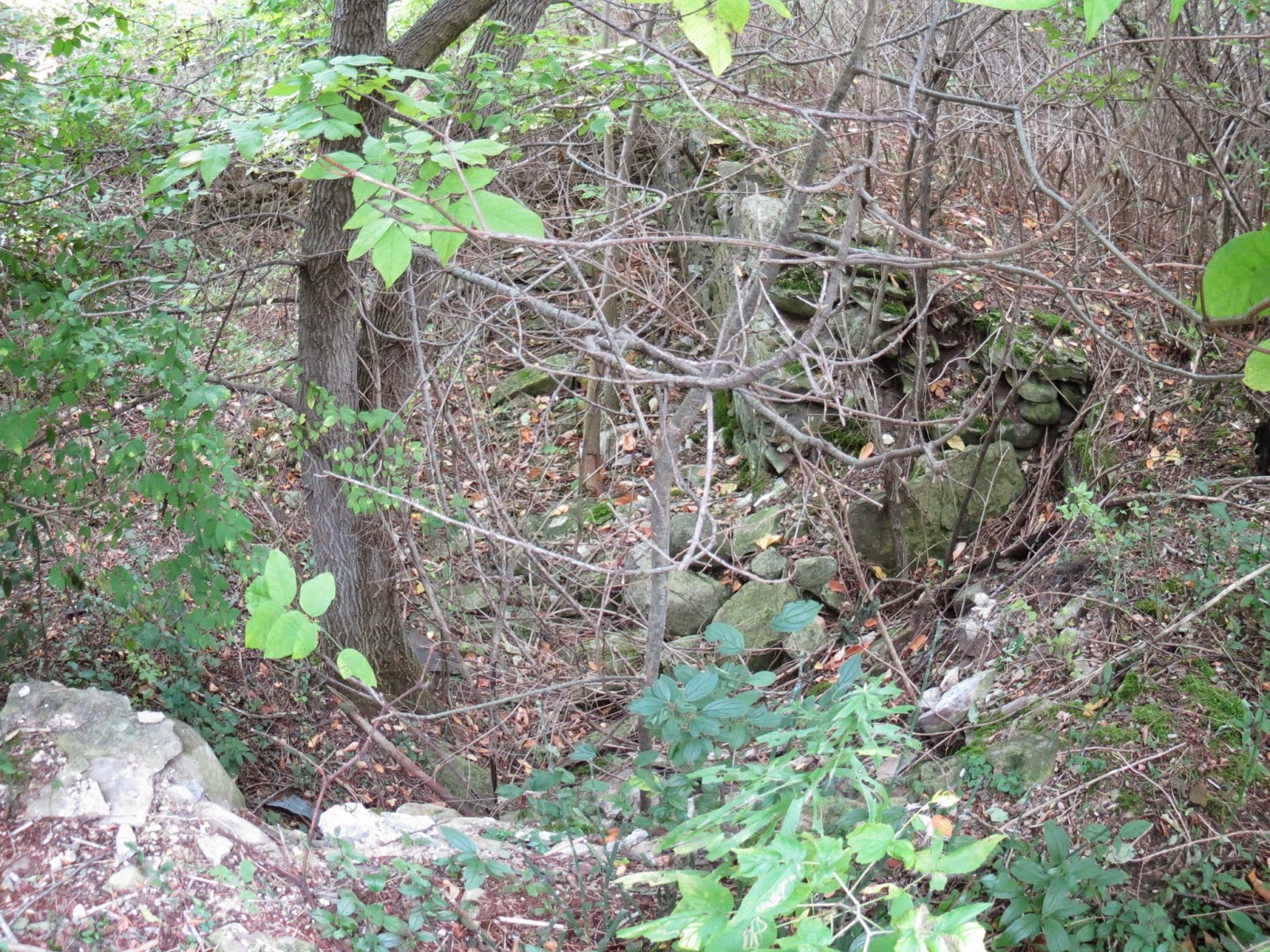 The trail at the new Clay Cliffs Natural Area north of Leland winds back and forth with long switchbacks up a gentle grade, with only short steep portions, and it comes out at a platform over Lake Michigan, giving onto an almost aerial view. The beach is a long way down, and you don't get there from here. 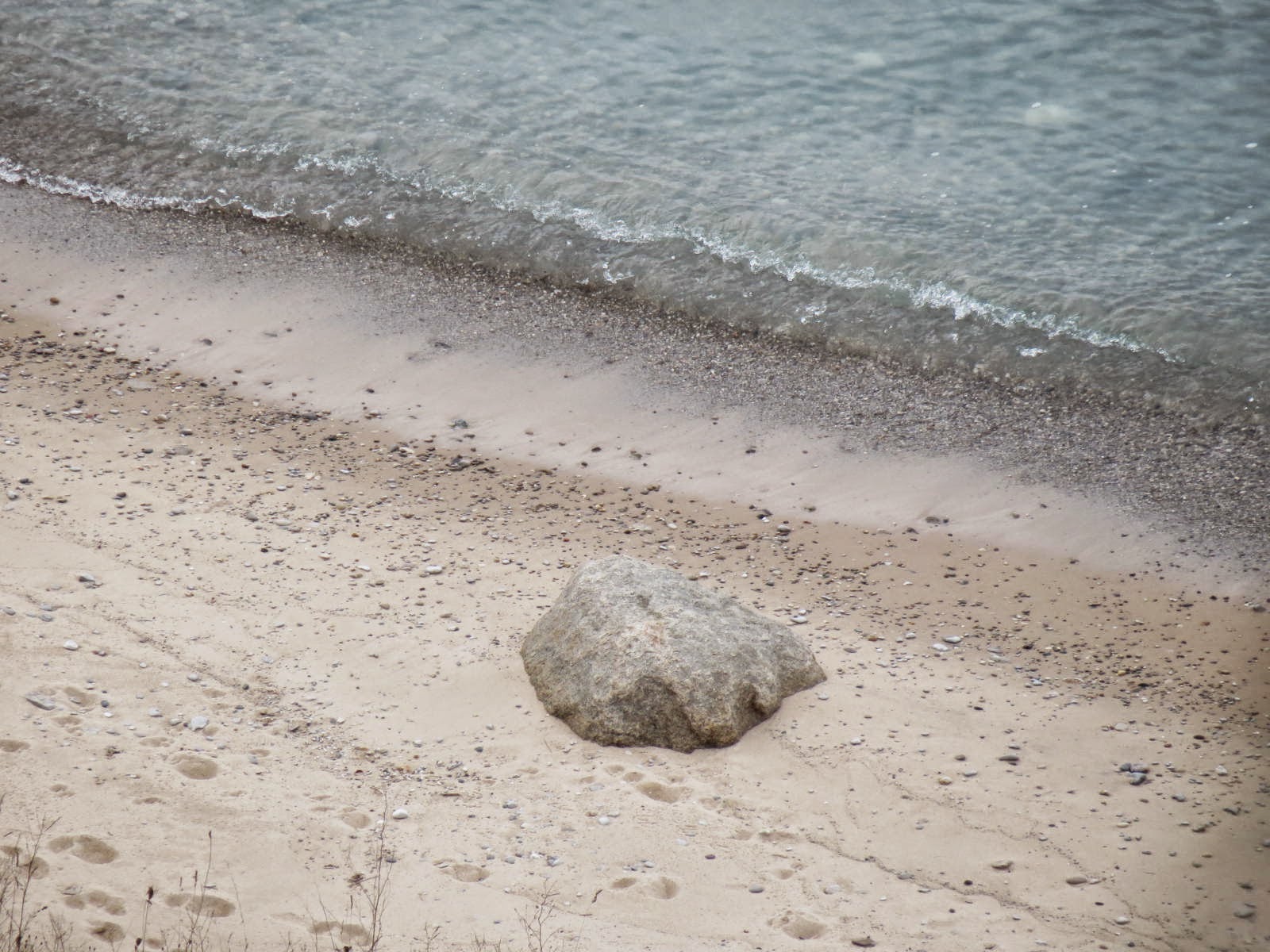 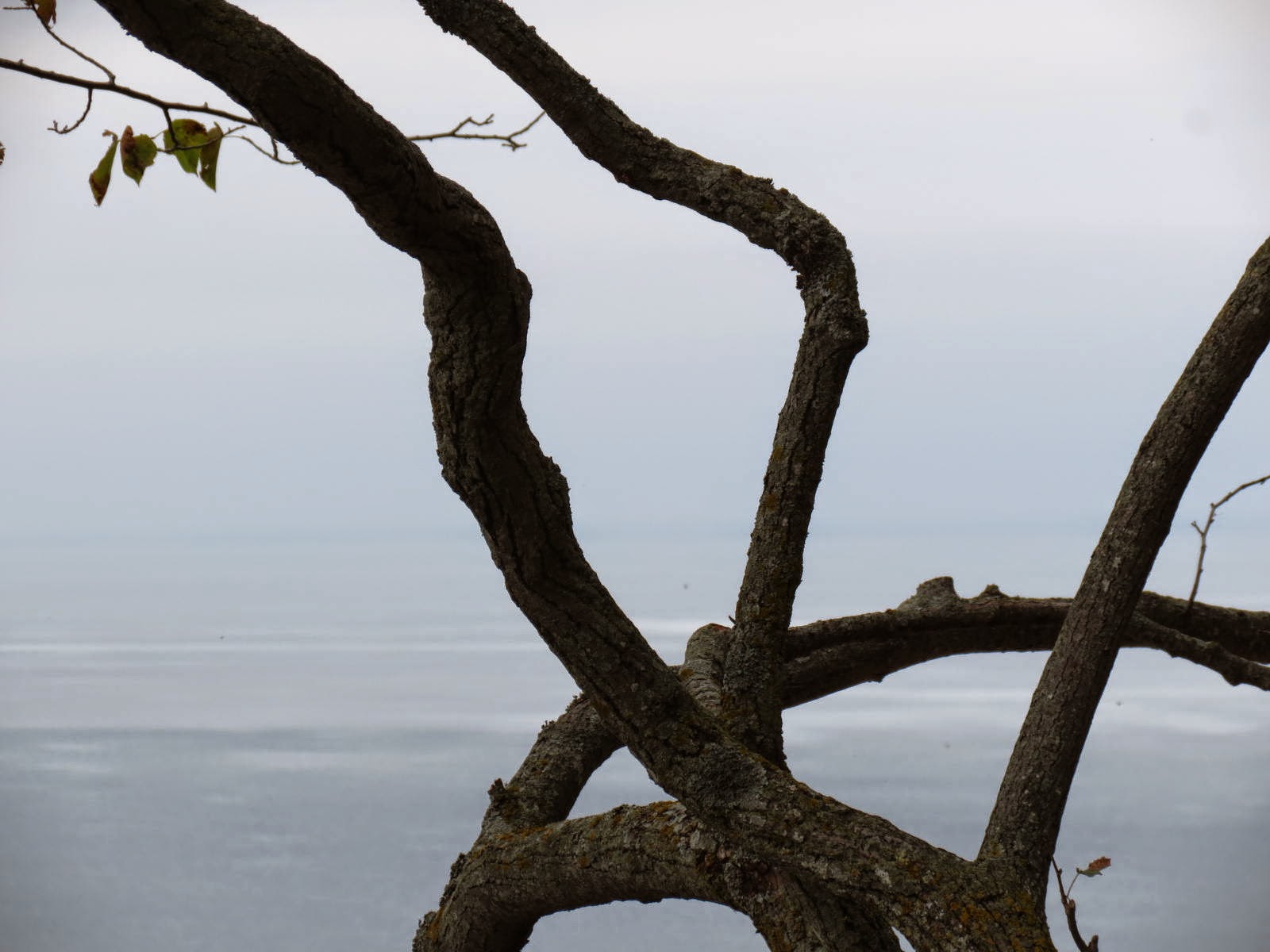 In my memory of that day, my first on the Clay Cliffs trail, however, the most vivid image will be one not captured by my camera. Beyond the undercut edge of the clay bluff, a closely curled leaf caught my eye. Its erratic jerking and twisting could not be accounted for by breezes, as other leaves nearby were still or, at most, gently drifting through the air, and so, abandoning our survey of the vast surface of Lake Michigan before us, my friend and I watched the dancing leaf, just beyond our reach. We were spellbound, entranced, mesmerized, and I convinced my friend that there must be a caterpillar wrapped up in the leaf, spinning a coccoon. “But it’s hanging in midair!” “No, it must have spun a filament to hang its coccoon from.” My friend called this my ‘hypothesis,’ so we looked as closely as we could but the filament I had ‘hypothesized’ remained invisible to our eyes.

The leaf continued to gyrate in the air, sometimes spinning, sometimes jerking up and down. I was sure the gyrations could only be caused by something inside the leaf, a creature that had pulled the leaf around itself like a cloak and was now at work spinning a winter home, its spinning movements causing the entire leaf to swing. That original silken thread must be very strong, my friend and I marveled. We were so caught up in the drama that had we brought chairs along with us we might have stayed an hour or more, watching this real-life nature documentary. We spoke of coming back in a few days to check up on the creature’s progress but at last started on the return leg of the path. 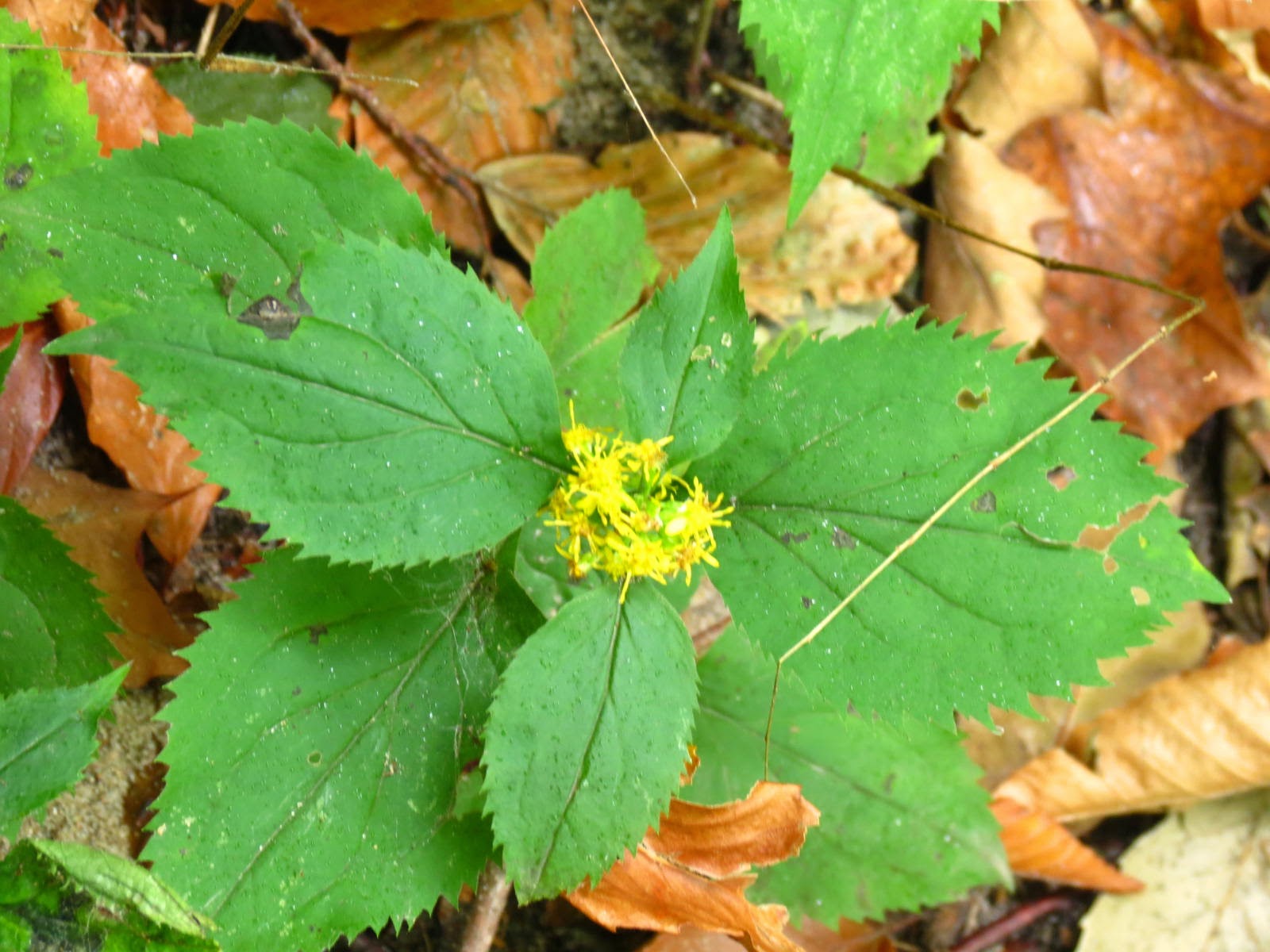 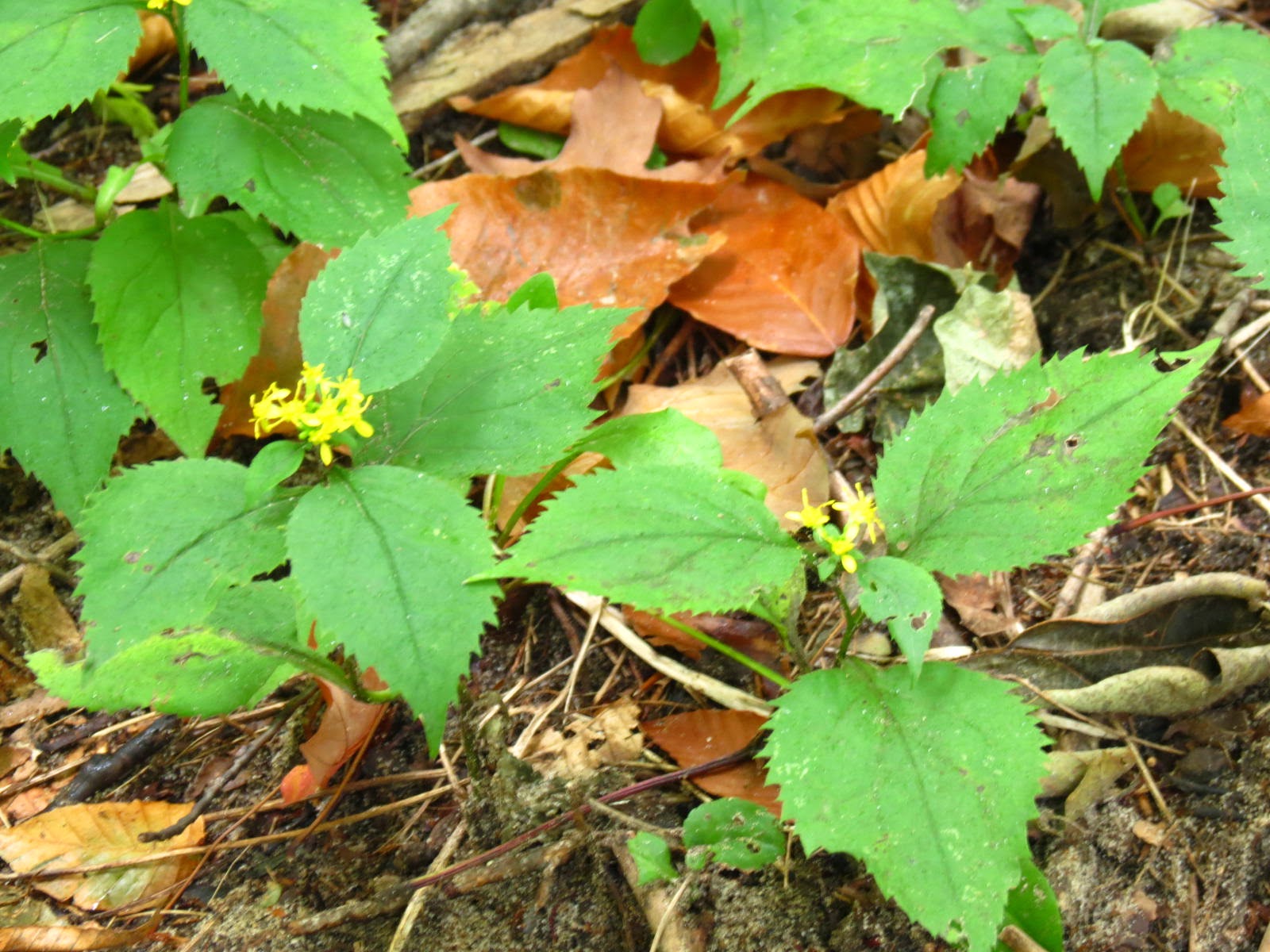 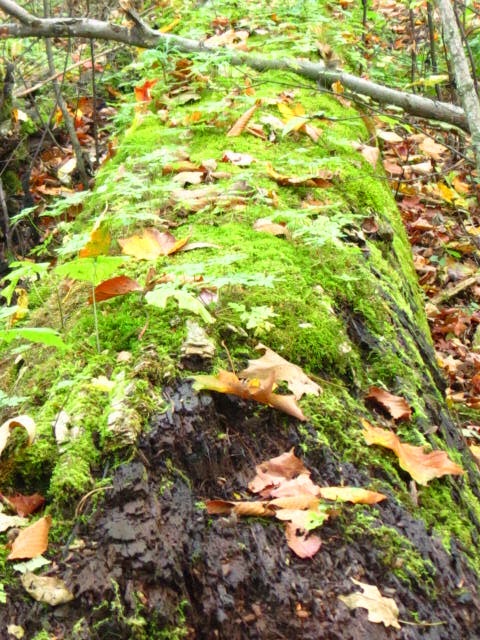 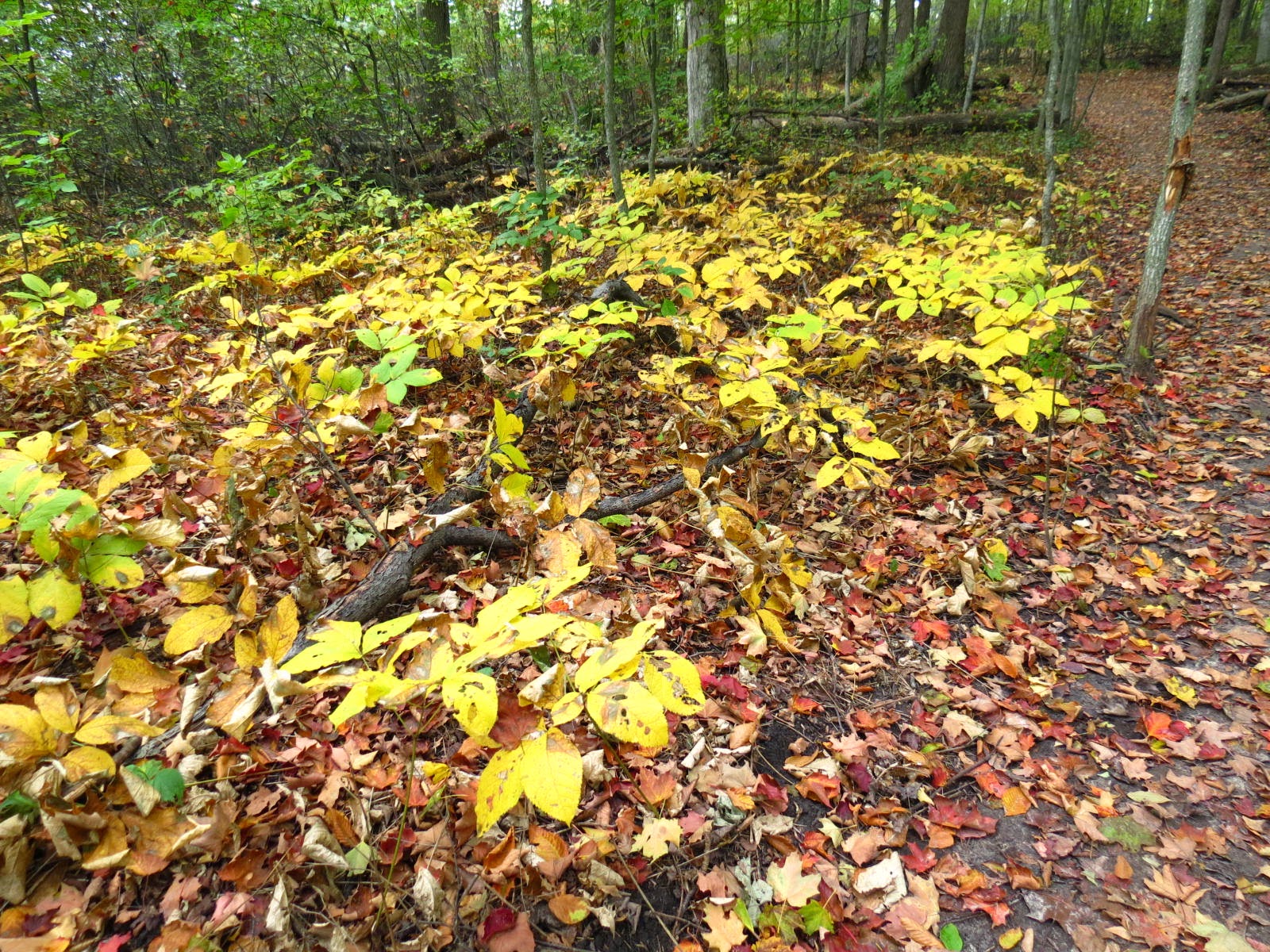 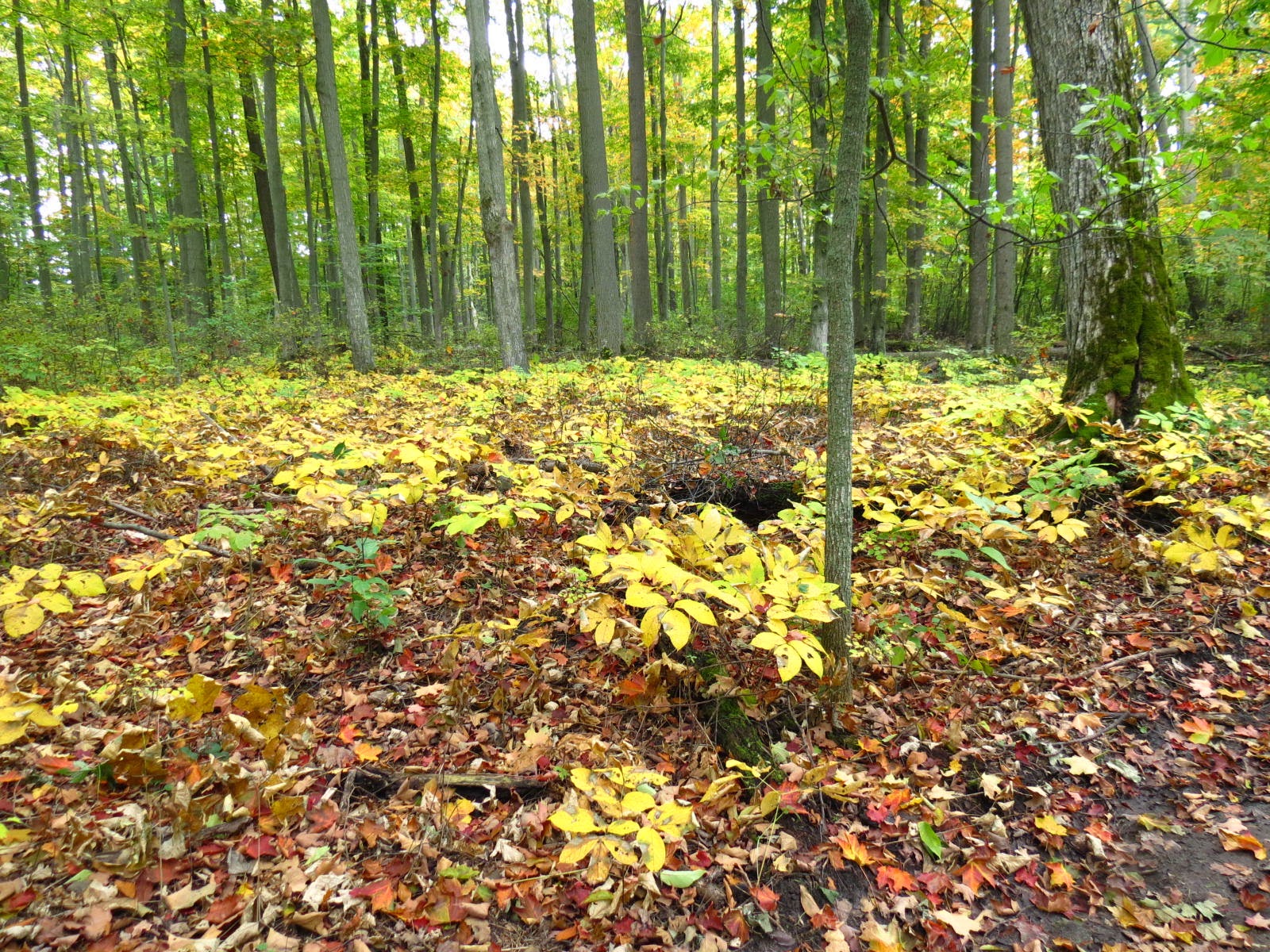 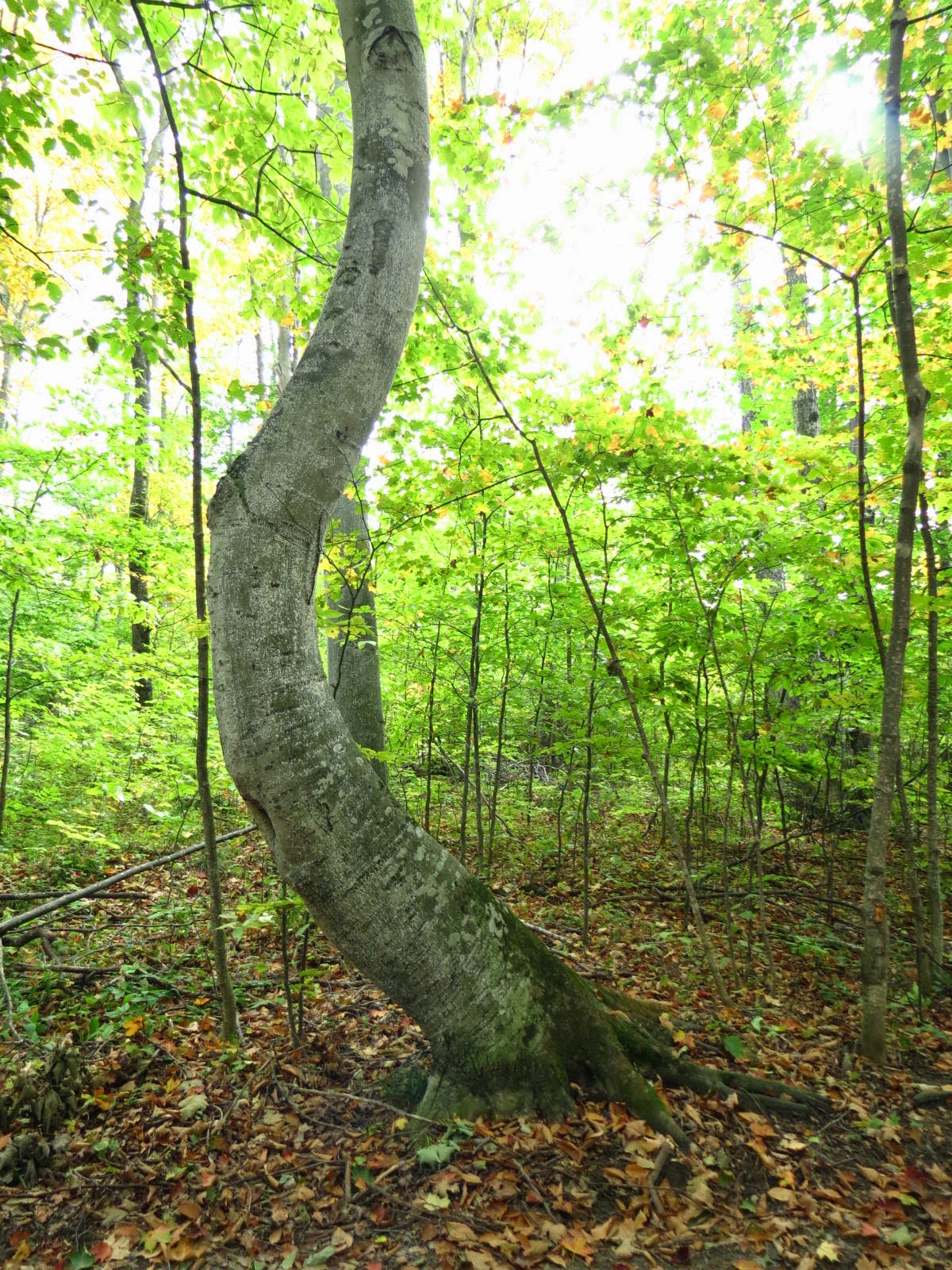 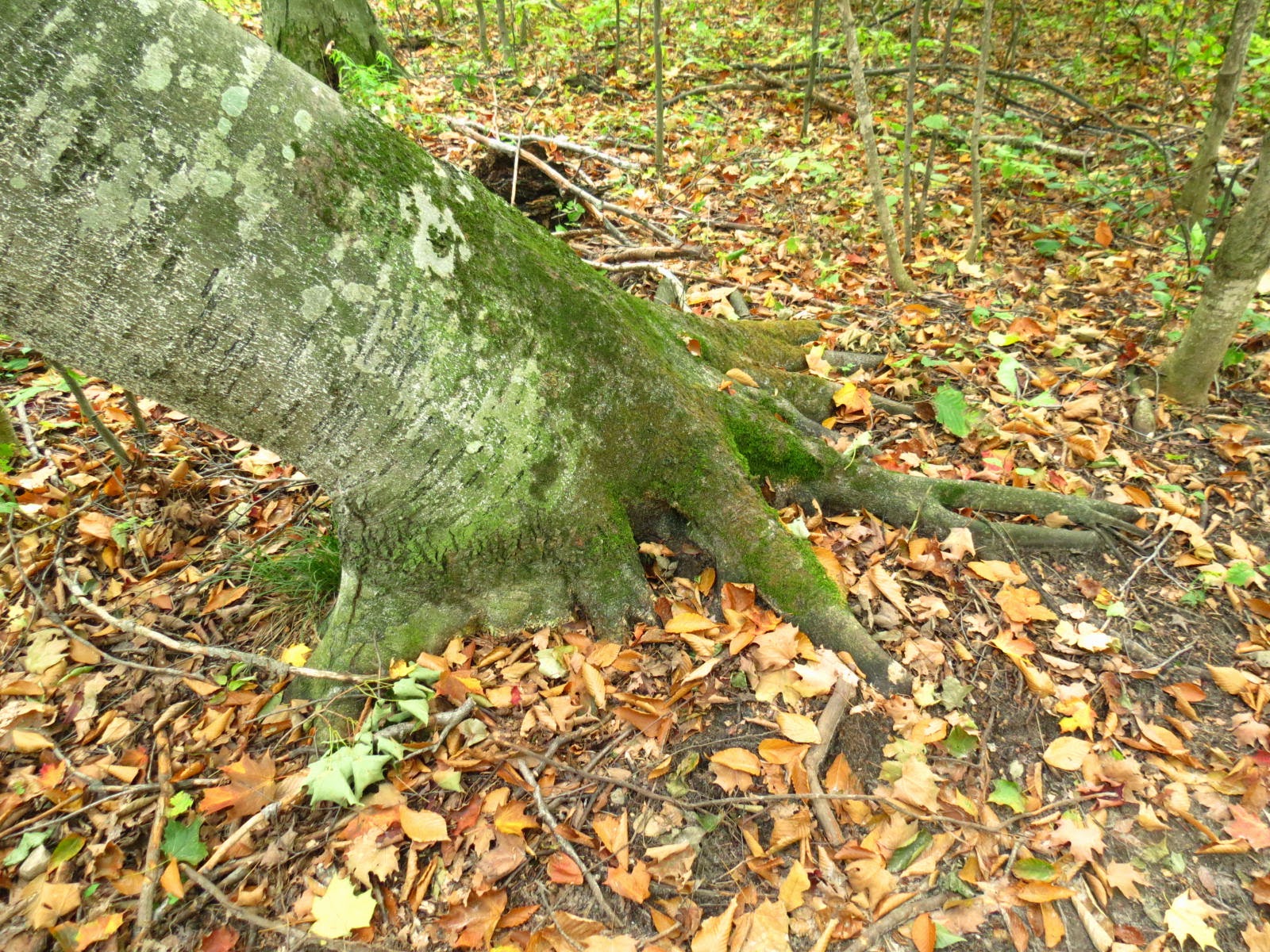 Most of the trees on this land have grown up since it was originally cleared, perhaps only since it’s no longer farmed, but one field remains open, cut for hay each year by a farmer on the other side of north Lake Leelanau. From that hayfield, one can see across clear to St. Wenceslaus Church. During the winter, did the original farm family take a horse and wagon across the ice and up the hill to attend mass? 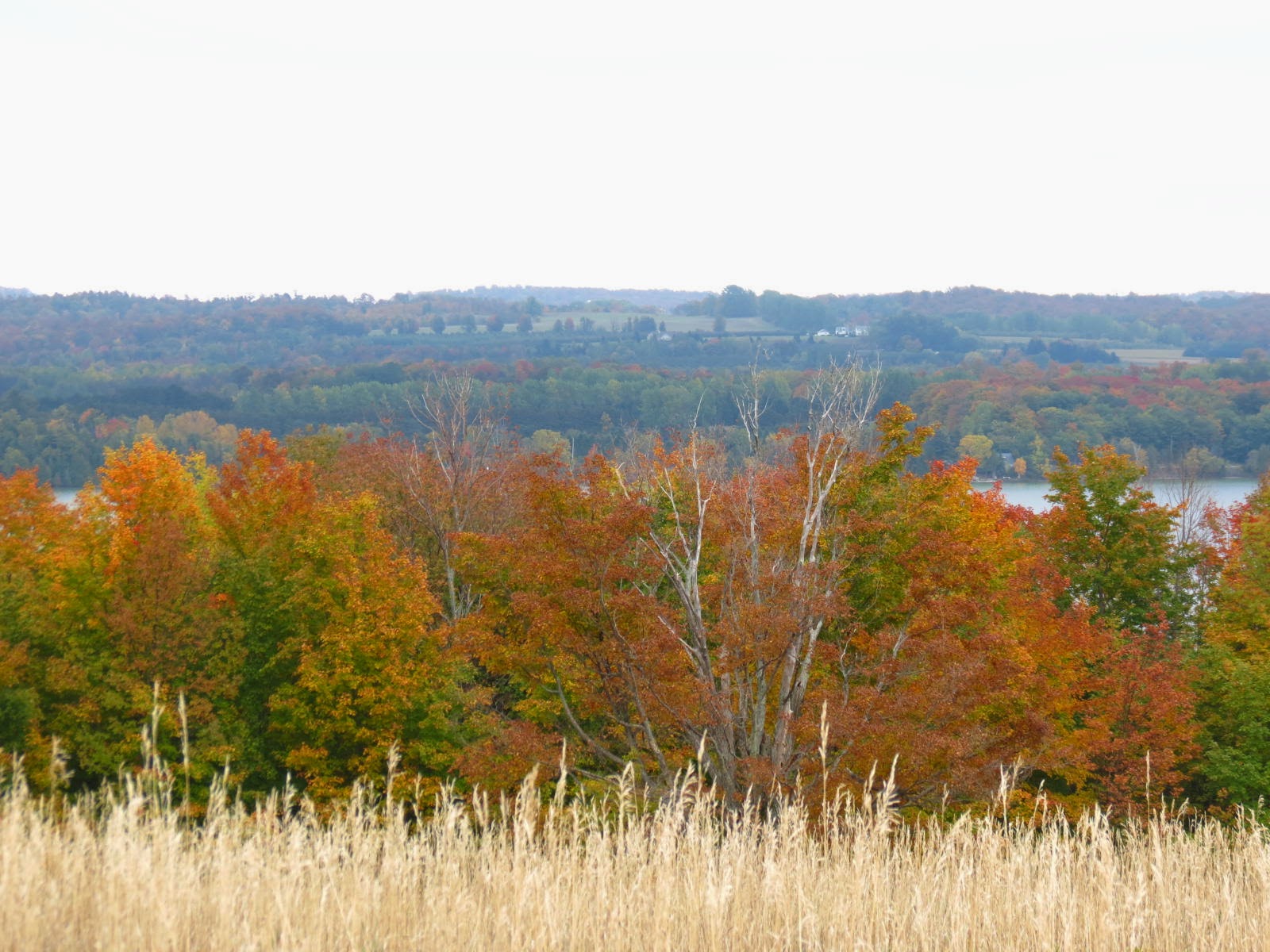 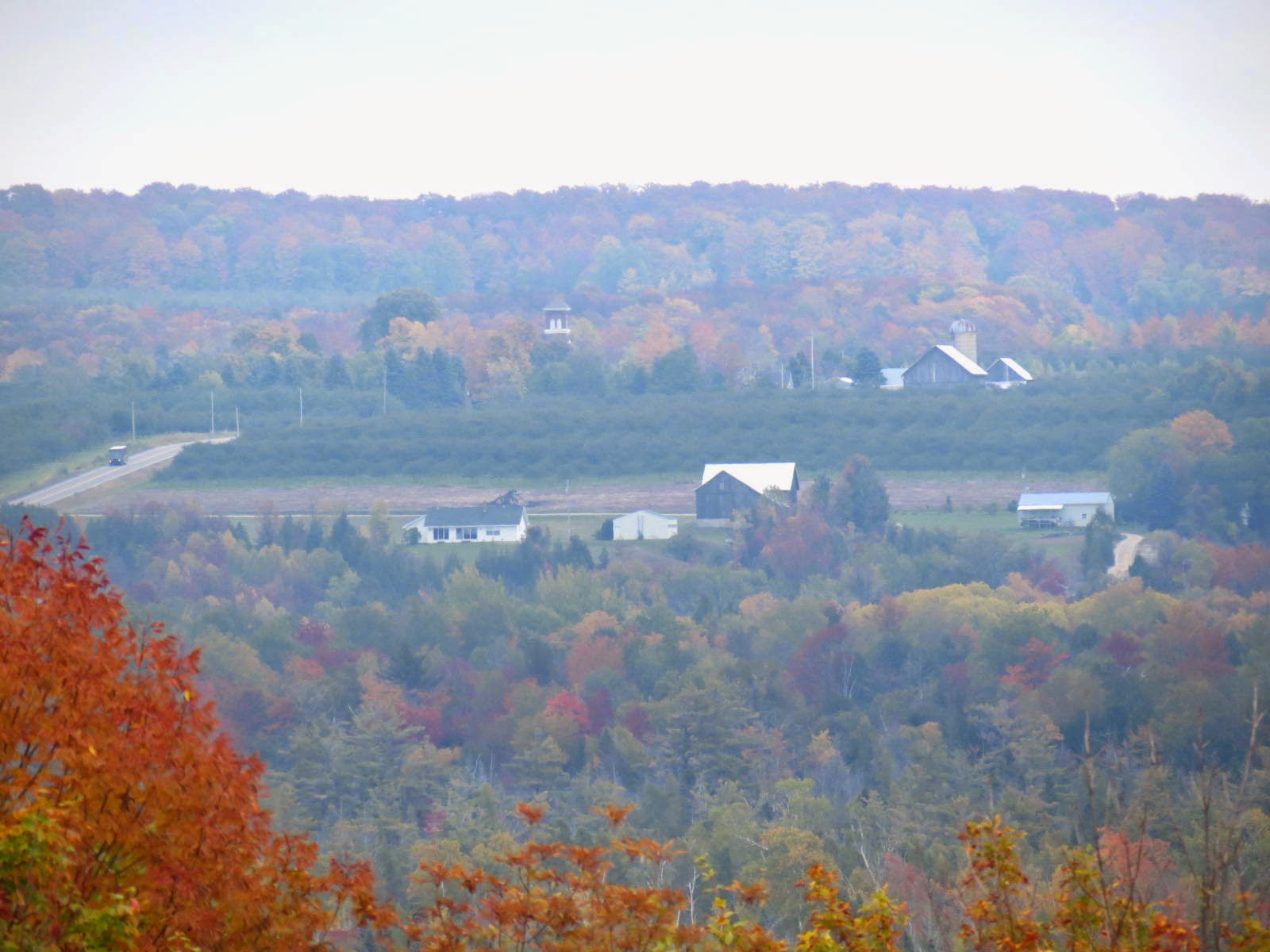 As it happened, the day I met my friend to walk the trail I’d just that morning finished reading Merwin’s book about medieval troubador poets and his own life and explorations in rural southcentral France. He writes of finding an old farmhouse, buried in vegetation, such as was the farmhouse I was to see only a few hours after reading his description:

The thicket of brambles had grown over the path to the front door, which faced south toward the road, and had made its way up onto the roof, into the tiles. To the left of the parched front door buried in its thorny tangle, another, older doorway, like a barn entrance, had been bricked up.... I peered through the hole into the half-dark of an empty, ruined room.

He writes also of the neighborhood chateau (something my northern Michigan neighborhood definitely lacks), built and rebuilt over the centuries, its stones at times sold and carted off to pay the taxes, finding their way here and there in other buildings of the region -- here part of a barn, elsewhere adorning a house, etc. Trees and stones: we tend to think of mountains and stone buildings as fixtures, but Merwin tells us differently; like forests, like orchards, they rise up and are taken town, either by man or by nature.

Stones lie wherever they are as though they had always been there. Our awareness of our own pace in time keeps us from recognizing that the motions of stones are akin to those of snowflakes and molecules, and to us the moment in which they lie seems like an unchanging condition, and they come to exemplify permanence. So the Venus de Milo looks to us as tough she had never had arms at all, and the ruin appears to have been the truth of the chateau from the beginning.

Merwin was only in his 20s, a young poet just setting out in life, when, thanks to a bequest from a relative and his own frugality in investing it and leaving the principal untouched, he managed to buy an old farmhouse in this magic, troubador-haunted region. He tells us that, for him,

...the awareness of the deep past was inseparable from the lure of the land, which soon held me there, and the structures themselves appeared to me as palimpsests of unsounded age....

This, I think, is what it means to love a place. One loves its history as much as the trees and wildflowers and hills of one’s own lifetime. To live in a place, truly, means living with its past as well as its present. And isn't that a lovely idea, the structures as palimpsests?

I was particularly happy with Merwin’s observation that the “crumpled” landscape of the Quercy was yet farmed, when first he came there, by the practice of ‘polyculture,’ or what we in the midwestern United States know as diversified agriculture. Isolated as the communities were, it made sense for them to be self-sufficient. Besides, their land was in no way suited to large fields and heavy machinery. Here in Leelanau Township, as well, farms here tend to be very human in scale, and recently there has been a turnaround across the entire country, with more and more small farms coming into production under the hands of a young generation. This is not “turning back the clock.” It is working with rather than against nature – and living as a human being rather than as a slave to mechanical industry – and preparing a happy, healthy future for generations to come, as well as enjoying our present good fortune.

Stones may move or be moved, over the course of the earth’s long history, by nature or by man, but we are here for only a short time, and while here, “we must cultivate our garden.”

I was spell-bound reading this. And contemplating "cultivating our garden". Our garden will probably be hit by its first frost tonight. Everything is already harvested except for some bunching onions, kale and second-planting cilantro.

Kathy, thanks for visiting here. Now can you (or caan anyone else) identify that yellow flower? I haven't been able to yet, and my friend didn't know it, either.