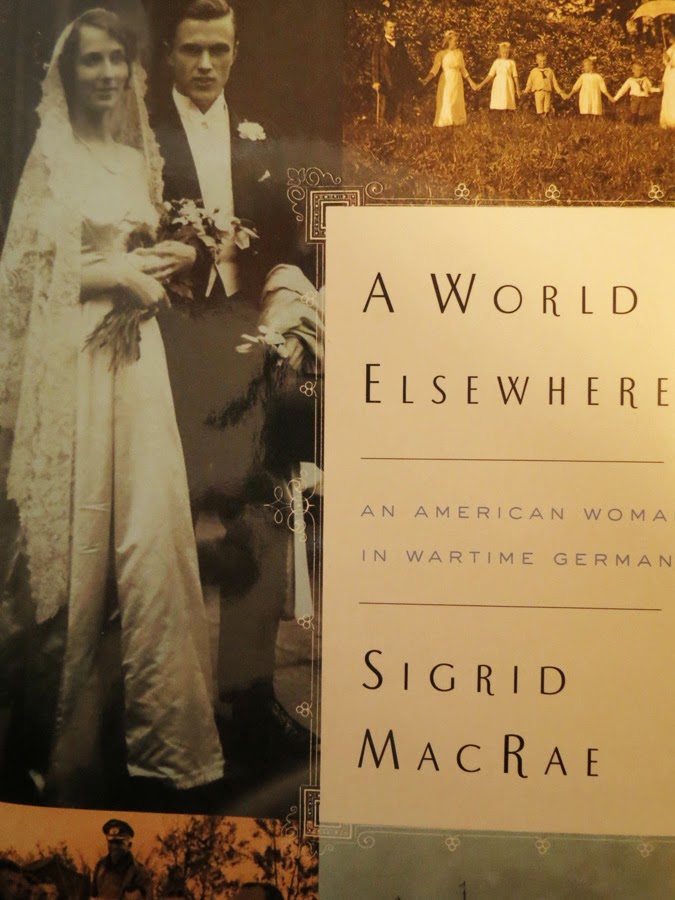 Someone at Viking made quite an understatement in writing the tip sheet accompanying the review copy of this book: “This shows the side of the [sic] WWII rarely seen.” A World Elsewhere is much more complicated than a story of “ordinary, decent people.” I was somewhat prepared for the author’s mother’s story, having hosted in 2006 another author whose family had survived repeated escapes in the same era--from Russia to Estonia to Poland to East Germany, West Germany, and finally to the United States.

Following the event with Sigrid von Bremen, I also heard another friend’s history of a complicated and harrowing World War II escape from the Germany of her birthplace, a third’s story of parents who survived both exile in Siberia and imprisonment in concentration camps, and a fourth’s telling me of many family members who died in those camps. But all of these were “decent, ordinary people.”

Sigrid MacRae’s parents’ story is unique in my own reading experience in two ways: first, that her mother was American (the other stories of fleeing Germany were all of Europeans), and second, that her father was a German officer.

In her prologue, MacRae tells of being given by her 85-year-old mother a box of her father’s letters, a box she was “reluctant” to open.

Opening the box—resurrecting him—would mean finding not only the man who became my father, but also the man responsible for the “Nazi!” a first-grade classmate had yelled at me as a six-year-old, newly arrived in the States from Germany. I didn’t know then what that was, but whatever it was, I knew it wasn’t good. The taunt stayed with me. It was thrown at me in many other guises, and eventually I blamed my father.

Eventually, after finally reading the letters, she undertakes extensive family and wartime research to be able to write her parents’ story. For the record, I'll note here that her father, while he   became an officer, was not a Nazi and not a member of the S.S. When he died, he was in the infantry, and most of his "action" consisted of marching through countries (France, Russia) Hitler hoped to conquer.

The book begins with the unlikely event of her parents’ first meeting and then, as MacRae tells of their getting to know one another, gives the very different backgrounds of her mother and father, Aimée and Heinrich. Aimée had lost her mother when only three years old; her father was cold and distant, her older brother anything but a protector. As if this weren’t enough, the girl spent years in a body cast to correct scoliosis. Thus Aimée’s girlhood and adolescence were spent in relative isolation, her education haphazard. Heinrich, by contrast, came from a large, close Baltic German family attached, before the Revolution, to the Russian court. He was confident, charming, and worldly in the best sense of the word. The two fell deeply in love, and when Aimée returned to Europe to marry him after a trip home, she expected to spend the rest of her life in Europe. When asked when she would be returning home, she replied confidently and emphatically, “Never!” For her, America was her father’s cold home, Europe her husband’s warm family.

A typical young married story begins: Heinrich immerses himself in studies, and Aimée begins having babies. They have the troubles and worries of any young couple trying to establish family and career but fewer financial worries than most, thanks to quarterly checks from Aimée’s trust fund in America.

But this is Germany between two world wars, and so along come unemployment, inflation, a weak government, and, eventually, the coming to power of Hitler. Heinrich’s family members and friends were not well disposed toward Hitler but did not imagine he would rise very high, be in power for long, or prove a great danger. That he was not a Communist something they saw in his favor.

At this point in the book a reader with historical hindsight begins to feel a chill.

Somehow the subtitle, An American Woman in Wartime Germany, did not prepare me to follow Aimée’s husband into occupied France as an infantry lieutenant. Imagining herself in her father’s shoes (helped by the letters he wrote to her mother during this time), MacRae paints a picture of French peasants clinging to their traditional hatred of the English and philosophically accepting the German invaders—until, too late, they realized that the Germans were making war not only against the English but also against the people of France. Eventually Heinrich, once a refugee himself when his family had to flee St. Petersburg for their estate in Baltic Germany, was put in charge of a POW camp and charged with helping refugees return home. He writes to his wife, “The misery in which these unhappy refugees live—here, there, wherever they find a place—is terrible.” Mostly, however, rather than dwelling on the ugliness of war, Heinrich writes home of the beauty of the French countryside and of his love for his family.

Almost all of my own European experience, as well as what foreign language competence I possess, relates to France, and the same was true for my father, a veteran of World War II—all the more reason I found myself in strange territory, accompanying, as it were, the German Army as it invaded France. It seems unlikely that the author’s father had any kind of vision of Germany taking over the world. Still, knowing what was to come in the Occupation, I could not take his letters at face value.

Then in June of 1941 came Operation Barbarossa, a three-pronged German military push into Russia. Despite what had become of Napoleon and his army in 1812,

...Hitler was confident, claiming that he had only to “kick in the door” and the behemoth would crumble. Heinrich was with Army Group Center, the largest of the three prongs of the operation, meant to deliver a lightning strike and bring the quick victory Hitler predicted would be his before fall.

Heinrich can’t help thinking that a German victory in western Russia might enable him to return to his happy childhood place, the family estate in Ottenhof. Odds seemed to favor them in that the disparate peoples of Russia had never become unified under Soviet rule, and the “defenders of the Motherland were hungry and hollow-eyed,” often throwing down their weapons “in panic and exhaustion.”

Like his friend and fellow officer, Alexis von Roene, Heinrich had little sympathy with Hitler’s values and goals. But he was a Baltic German, with strong Russian roots.

The Russians had been set up on the bank of the Dnieper in 1812 just as they were now. If an awareness that this time Heinrich was in the role of invader, not defender, cast any shadow or brought a frisson of unease, it was quickly banished. He mentions no burned villages, no ruthless brutality. He was no alien invader; he was returning to land defended over the years by forefathers. This was a liberation, a return home.

He was killed at Mogilev on July 23, 1941. From that date forward his children, including the baby girl who never had a chance to know her father, had to depend on the resourcefulness and ingenuity of their American mother to preserve their lives and insure their future, and the remainder of the book is faithful to its subtitle.

From an isolated girlhood, interrupted by surgeries and immobilizations in a body cast and followed by an unhappy boarding school experience, the widow Aimée, American-born mother of six children born in Germany to a German father, finds within herself enormous reserves of strength because – she had no choice. Residents had been forbidden to leave East Prussia, but the roads were seething with fleeing refugees, Berlin was under siege, and if the family stayed put as ordered, Aimée’s oldest son, 16-year-old Friedrich, would be taken into a German army desperate for men.

She gave each child a small chamois bag with [her brother’s] Chicago address to hang around their necks. Putting any hope at all into such a fragile vessel seemed absurd, but she felt compelled to do it. They were headed into the unknown, and the thought of being separated in the maelstrom ahead was terrifying.

They had a wagon and a horse. They had, for a while, potatoes. At last they reach British lines, where Aimée persuades a British officer not to send them back into Russian-held territory.

After a series of refugee and displaced person camps, the family at last settles “permanently” in the traditional farming village of Grosseelheim, where the doctor friend who has attached herself to the family hopes to set up in practice, but the villagers and farmers are poor and cannot afford much doctoring. Then the doctor herself dies of cancer, and the family turns to relatives in America, hoping to emigrate.

Once safe in New England the family faces new struggles: an abandoned farmhouse that needs almost everything essential to it replaced; a deportation threat; the necessity of moving from a house they thought they would never leave when the property is condemned for expansion of a U.S. Navy airfield. But of course we know, from the beginning of the book, that mother and children flourish in America.

For me, it was not so much the story of  “an American woman in wartime Germany” that held me spellbound but the individual stories of young Aimée and Friedrich, their love story, and the unsettling view of the invasion of France through the eyes of a German officer, along with the grit and determination Aimée demonstrated in building a new life in America.

A World Elsewhere is beautifully but simply written. Much of the words on the page come directly from letters, the author allowing her parents to speak for themselves. The accumulated facts of the story are haunting, simply by being true. I doubt that very many postwar American women have ever imagined themselves wives of German officers. In hindsight and from an American perspective, such a vision is unthinkable. And yet, here were two young people, previously tossed about by life, who fell in love and did what lovers all over the world have always done--they married and began a family—little realizing the tossing about that lay ahead of them in the future.

The author writes in her epilogue that researching this book

...taught me that there is not one history, but many; that context is everything, and life is far more complex than we ever imagine, especially when history writ large intervenes. I found that despite the stiff-armed Nazi salutes and gutteral “Achtungs” that came my way, I was not the devil’s spawn after all, just the product of two people in a particular time and place, enmeshed in circumstance, their hopes upended.

MacRae’s parents’ story is not one familiar from hundreds of others from World War II, but the author conveys its truth and poignancy in such a way that the lives of Heinrich and Aimée will remain with readers long after the book has been closed.