Putting My Money Where My Mouth Is, Part II (Another Unveiling): A Mission for Safety and Courtesy


We’ve all heard and been given and sometimes even repeated the advice: “Don’t sweat the small stuff. “Let it go.” “Get over it.” “Move on.” Etc. “People aren’t going to change.” So I tried for years to stop getting annoyed at drivers who fail to signal turns, either turning in front of me when I didn’t expect it or causing me to wait unnecessarily because I thought they might turn in front of me. All that. It’s the law, but it’s a law that is almost never enforced and one that the majority of American drivers don’t seem to feel is all that important. I signal my turns, and I talk to people about the importance of signaling turns. But nada. No change. No dice.

No one likes to be scolded. (That goes for me as much as for anyone else.) People don’t like to be nagged. (Ugh!)  But it’s impossible to “lead by example” if no one follows. Hmmm. Problem....

Late this summer--too late to hit the major tourist season--I had what seemed like a brain wave. (Whether it was or not, time will tell.) My brain wave is to mount a new kind of campaign – a positive campaign, a bandwagon I think my friends and neighbors and even strangers visiting Leelanau County for the first time may be eager to board: SIGNAL TURNS IF YOU LOVE LEELANAU -- or --

“All states require drivers to use directional signals to indicate their intention to turn, change lanes or pass a vehicle.”

Okay, the name of my local accident reconstructionist friend is Mark Gallo, who is also editor of “Reference Points,” the professional journal of the Michigan Association of Traffic Accident Investigators. The journal is not available online, but Mark kindly e-mailed me a recent copy, which includes a feature on accidents caused by texting while driving (which is no safer in voice-to-text mode, I’m sorry to tell you) and accidents caused by failure to signal. The same article cites a paper from SAE (Society of Automotive Engineers) titled “Turn Signal Usage Rate Results: A Comprehensive Field Study of 12,000 Observed Turning Vehicles.” While texting is thought to be responsible for 950,000 crashes a year, failure to signal is estimated to be a factor in two million accidents. Thank you, Mark, for this information source, as well as for providing details on the Michigan law governing signaling turns.

Back to me. I admit that Northport has particularly confusing intersections, but that’s all the more reason to use turn signals. The highway turns and turns and turns again, and many drivers, local and visiting, believe they don’t have to signal if they’re “following the highway.” The fact is, a signal is required when making these turns, and when you stop and think about it for half a minute, the reason is clear: Who knows you’re going to follow the highway? Instead of turning left from Nagonaba onto Mill, you might be going straight (to the post office or the harbor) or turning right into the parking lot of Tom’s Market.

Similarly, many drivers think a signal is not required if they’re in a turn-only lane, but have you ever gotten yourself or seen another driver get by accident into a turn lane and then go straight ahead? When I’m behind someone in a turn lane and see the signal, I feel more confident that the driver ahead of me knows what he’s doing.

The little courtesies of the road have always pleased me. We don’t have to know one another personally to extend these courtesies: they work even at night, in the dark, and it’s self-care and consideration for others, all wrapped up in one simple, educated adult practice. It's civilized to the max.

This morning I stood for a while on the northeast corner of Mill and Nagonaba (wearing one of the new t-shirts), making a tally of left-turners who signaled vs. those who did not. Things started out badly, with four unsignaled turns in a row. At one point the score was 17:4, with fewer than 25% of turns signaled. Sad! Then things began to change.

Two Northport school buses made the turn, their buses full of kids, and I was very happy that both drivers signaled, keeping the kids safe. Then it seemed that if the lead driver in a line of three or four cars and trucks signaled (some waved at me, having read my message), the ones behind often followed suit. I didn’t stand there much longer but quit when signaled turns (17) outnumbered unsignaled (14), glad things had turned around for a while, for one morning, at least.

Maybe leading by example will work. Maybe all it takes is for more of us to be leaders. How about you?

A limited number of these t-shirts are currently available at Dog Ears Books for $18.87 plus tax, i.e., $20. This is not a patented idea. I’d love to see it spread. 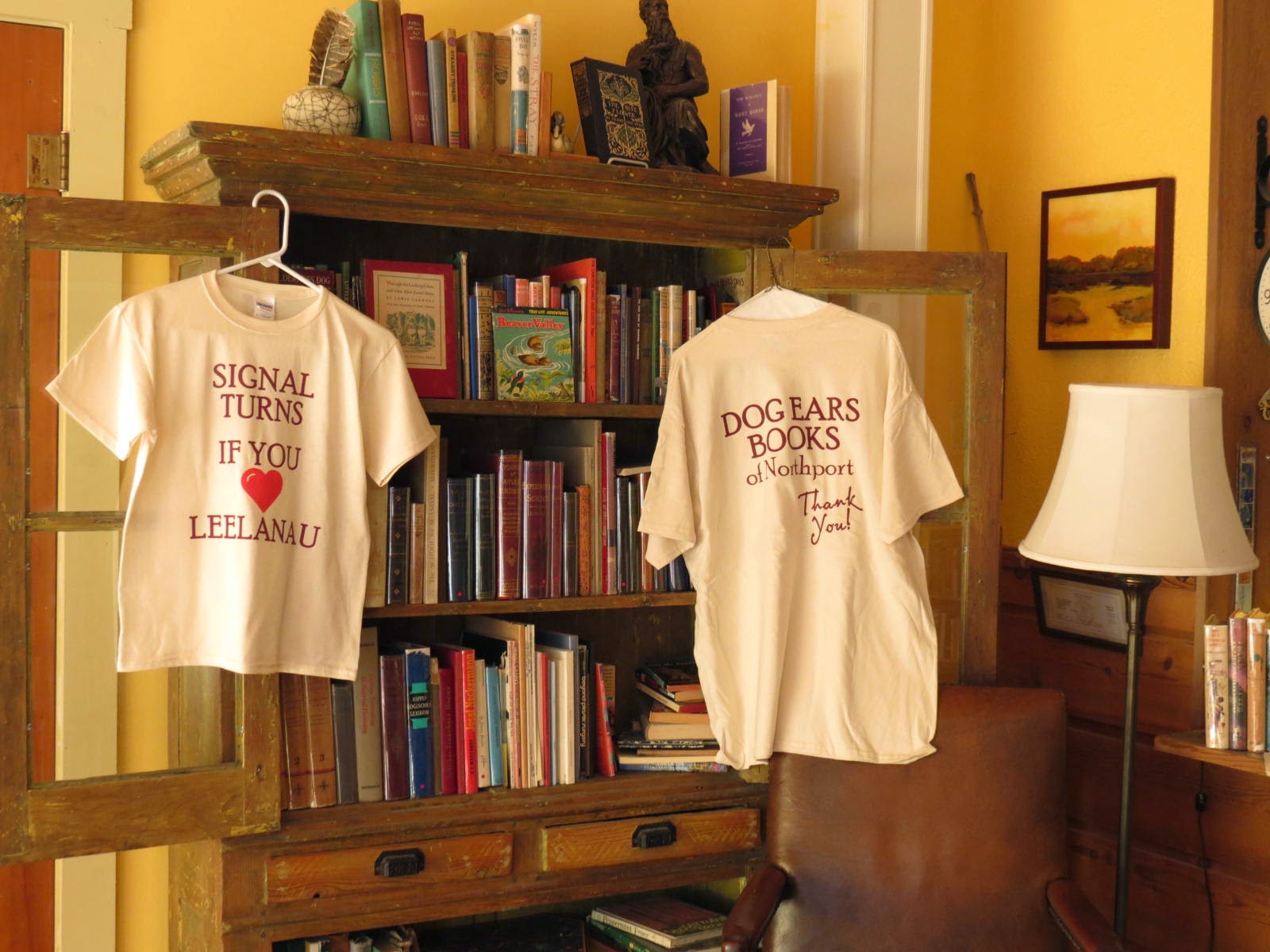 Interesting campaign, Pamela! I wondered what you were doing out there yesterday when I drove by and waved. I must admit I'm a "selective signaler." If someone is behind me, I signal. Or if I'm turning left at Tom's, and someone is at the stop sign, I signal. Otherwise I don't. Good food for thought. Karen

Karen, I'm glad you brought up the matter of signaling only when someone is behind you. Please think about not only drivers in front of you, coming into the intersection from other directions, but also about pedestrians waiting to cross. Pedestrians need to know what drivers are going to do, too. Thanks for joining the discussion.