I Didn’t Guess – I Looked It Up 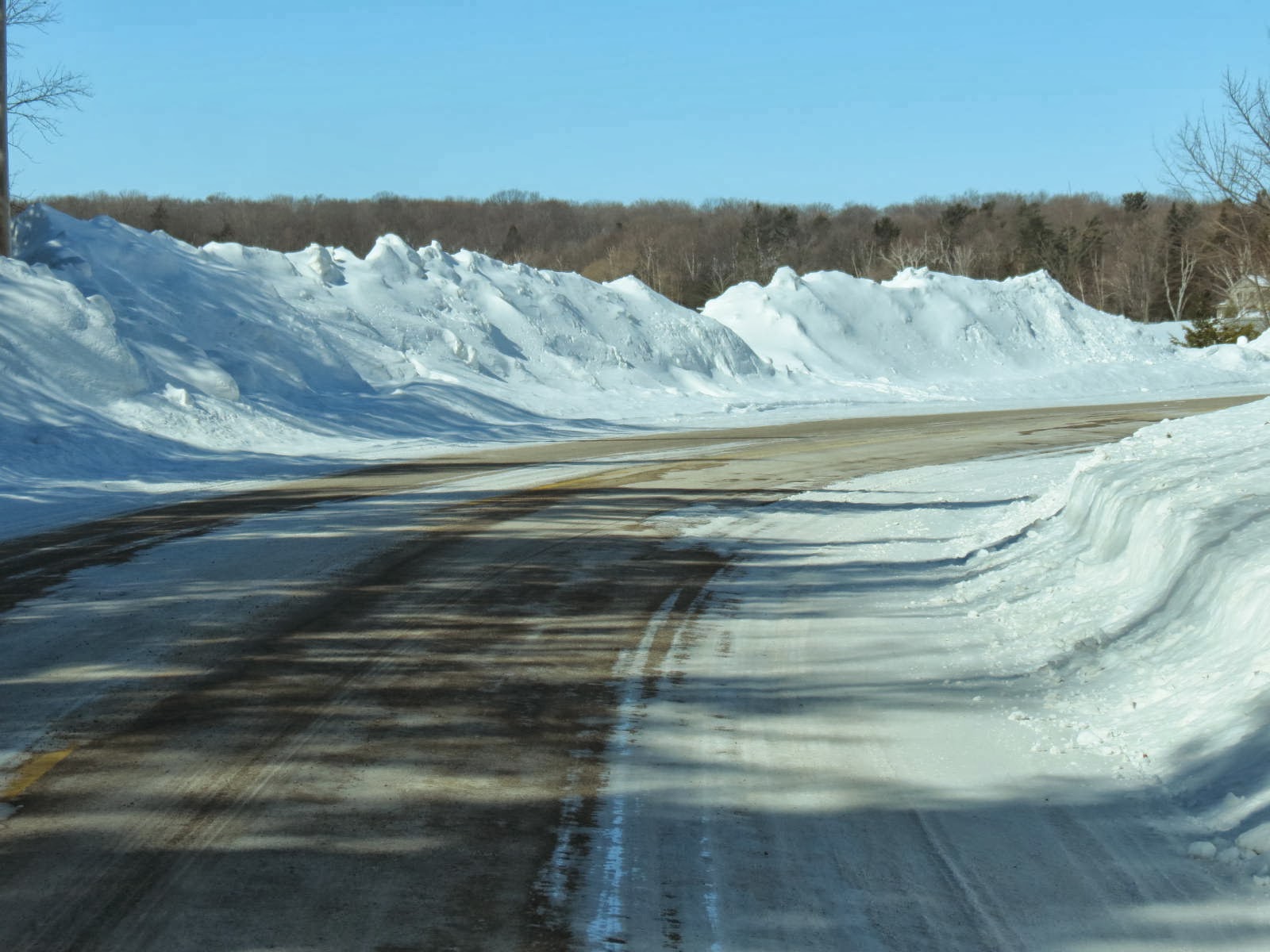 The weather. What else? Other conversational topics, one by one, drop by the snowy wayside. We still have a range of topics, don't get me wrong, but it's narrower, if you will. There's how cold it is, how much snow we have, how much propane we've burned, the price of propane, the cost of snow-plowing, how much longer the cold weather is going to last, how much more snow we're going to get, and so on and so forth.

Is anyone else out there old enough (actually, I know some of you are) to remember the slogan of our old grade school “Look It Up Club,” sponsored by World Book Encyclopedia?

Back when encyclopedia salesmen (as I recall, they were all men) came to a neighborhood, their first stop was the neighborhood school. Only after the school bought a set or sets of the beautifully bound, colorful volumes, and the pupils had signed pledges never to guess but to look up answers to all their burning questions, did the salesmen fan out to residential homes. My parents plunked down good money for the white binding. Why? I think it was more expensive than blue or red, and the information was the same, regardless of the binding, and my parents were generally very frugal and canny consumers (or shoppers, as we said then). The educational value of so much knowledge must have gotten in the way of the careful calculations they normally made.

Andrei Codrescu didn’t grow up in the U.S., but his wife did, and she was a member of the “Look It Up Club” in her day. Codrescu’s little essay on wasting time online – or, more to the point, having his time wasted online by others – only begins with mention of the Club and then goes on to more current concerns. Worth reading, though. Won’t take you long, either. Then -- your assignment, should you choose to accept it -- let me know what you think about what he says.

What I set out to look up this morning online, though, wasn’t the old grade school “club” but snow and cold records for northern Michigan. (Dawn got me started.) I remember very clearly my first winter in Traverse City and how one had to enter intersections with the same caution necessary on Illinois farm roads in late summer. Illinois: tall corn. Michigan: tall snow. No visibility around the corner. No visibility until you were in the intersection. That’s how it was on the roads that winter. And the view from indoors? Snowing. Never not snowing.

Anyone who is dubious or skeptical and/or too young to have been around for the Up North winter of 1970-71 can look it up here, but if you don’t want to bother I’ll save you the trouble: 184 inches. What did I know then? I’d never lived so far north and thought that such a winter must be typical. Streets, sidewalks, and alleys were plowed around the clock, and life went on as usual, as people shoveled their roofs (I’d never seen people shovel snow from roofs before), and icicles grew two stories in length, descending from second-story eaves clear to the ground. There were a lot of “sword fights” among kids in the neighborhood.

The coldest day ever in Leelanau County? We stayed overnight with friends one New Year’s Eve, and I swear the outdoor thermometer at their old farmhouse read – 40 F on New Year’s morning, but do you think I can find anything like that online? As I recall from the time (early 1980s?), the official temperature was not as low as their thermometer reading, but the air was definitely cold enough to chill lungs. We walked to the home of neighbors of our friends for New Year’s Day brunch (no way cars were going to start: ignitions just clicked when keys were turned and made no further effort) and were only able to do that because there was no wind whatsoever. No wind chill, but that’s how cold it was, children: The wind had frozen stiff and couldn’t move!

If you are interested in average temperature, snowfall, humidity, heating and A/C costs for Leelanau, you can find all that here, but I’ve looked up enough for one day. Time to read a little poetry. Or I could just close up shop and go ice-fishing. Time to toss a coin.... 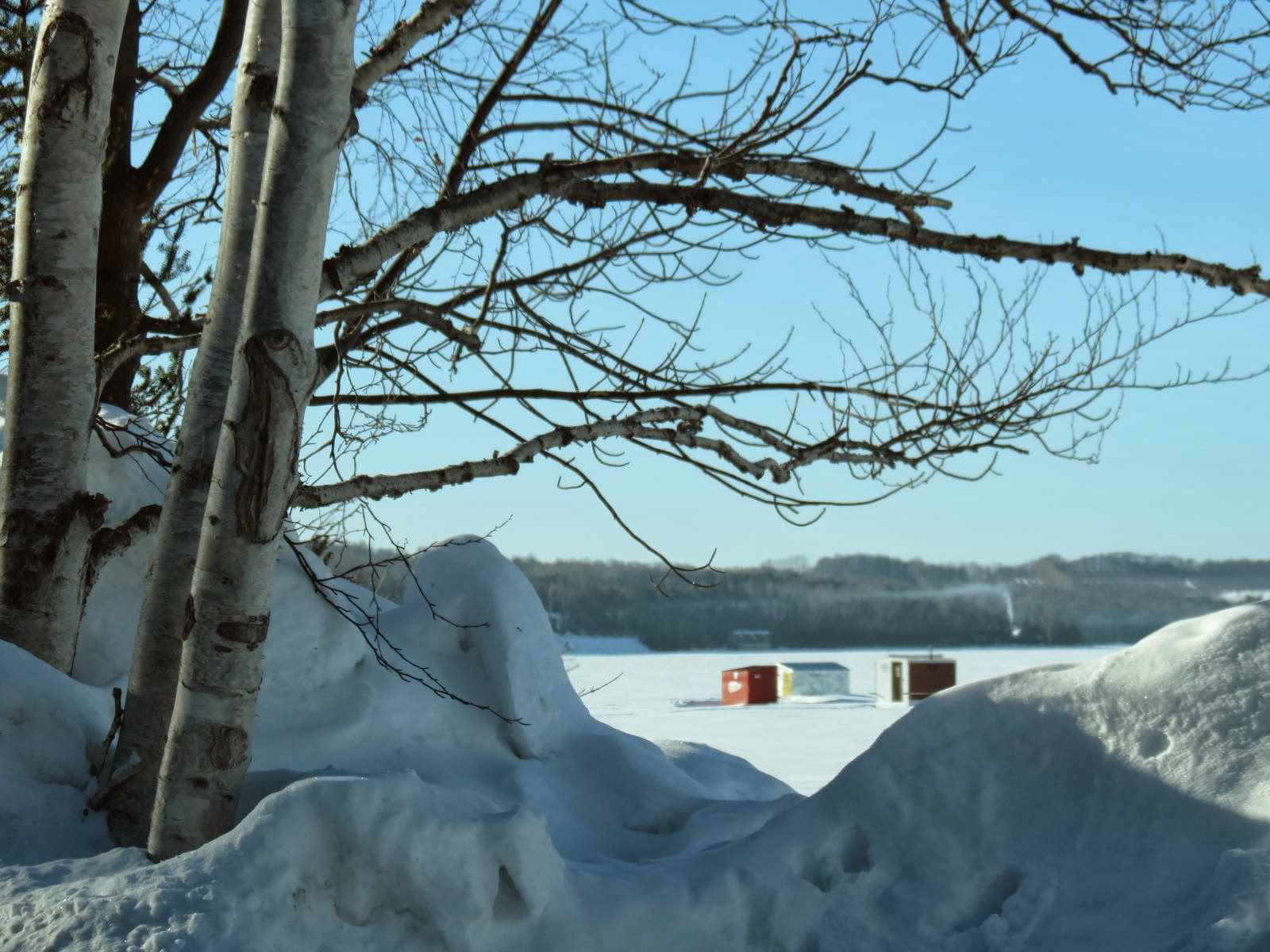 P.S. Karen has much more dramatic photos of mountains of snow on her photo blog. Check it out.
Posted by P. J. Grath at 9:02 AM

Pamela...Love the fishing shanties through the snow pile! Thanks for the plug. Karen

I'll bet Andrei Codrescu would have a lot more to say about Google and Facebook today. I used to find extremely interesting rabbit trails on Google, but lately I find mostly . . . mashed potatoes. It's like the difference between being allowed back in the stacks at the university library and being limited to the "New Arrivals" shelf at my neighborhood library, only not that good.

Hi, Karen and Gerry. Yes, I liked seeing the shanties peeking between the snow piles, too. Told much more than shots of shanties alone on the ice.

Google ain't what it used to be, for sure. Refining searches used to work so well. Now? And why? My guess is that advertisers got fed up with being refined out of search results.

Facebook is a truly mixed bag. I've received important news from friends and family that way but see way too much in the way of "cards" that look like bumper stickers or t-shirts, passed along and shared from friend to friend. I'm much more impressed when a friend says something in his or her own words. Occasionally it happens. But the whole medium is designed for the quick one-liner, not for reflecting seriously or sharing intimately. IMO (not so H).

Hahahaha....it's a standard line in my family when some interesting but little known topic comes up...."If you knew a librarian she could probably look that up for you."