"Did He who made the Lamb make thee?"

March – at last! Often considered the least bearable month Up North, March can bring late winter storms or early spring blossoms, or it can zig-zag back and forth from one season to the other. Wise are those who save their “winter” getaway for March, when desire for change – of scenery, of weather, of company – can just about blow the top of a person’s head off. What do you say of today? Is it lion or lamb? Or, taking our cue from William Blake, shall we ask, is it tiger or lamb? We drove home around midnight last night, after a dinner party, through near-blinding snow, so I'm going to say March came in like a very big cat, neither creeping softly like fog nor frolicking gaily like a spring lamb.

Whatever March brings, the plan is for our pack to stay put and stick it out. On Thursday morning past, we thought we might just stay put at home and not even venture into the village. The morning had brought more subzero wind chills, there was more blowing and drifting in the forecast, and all the area schools were closed. Why bother? On the other hand (see photo above through farmhouse bathroom window), the sun was shining! I mean, the sun was shining!!! And our driveway was plowed clear and not, it seemed, drifting closed any too fast. We came to town. I opened the bookstore. A customer called, having gotten my message from yesterday, and said she would be in to pick up her order, eager to have it. “Good! I’m here!”

And considering that we’ve endured yet another week of brutally cold weather, with no real let-up in sight, it wasn’t a bad week for Dog Ears Books. First of all, on Wednesday I discovered that we’d made the website of the National Writers Series. Cymbre Foster had contacted me earlier in the month, sending a questionnaire and requesting photographs, and NWS has always been supportive not only of writers but also of area bookstores, but the new NWS initiative to feature bookstores and bookstores on their site has me nearly speechless with gratitude. Nearly, I said. Thank you, National Writers Series!

Next, remember the mystery poet? Nothing had come from him or her for quite some time, but Wednesday brought another poem (this one #7). As usual, it was typed on lined paper, with no return address or signature, and a variety of old stamps made up the necessary postage. Thank you, mystery poet! 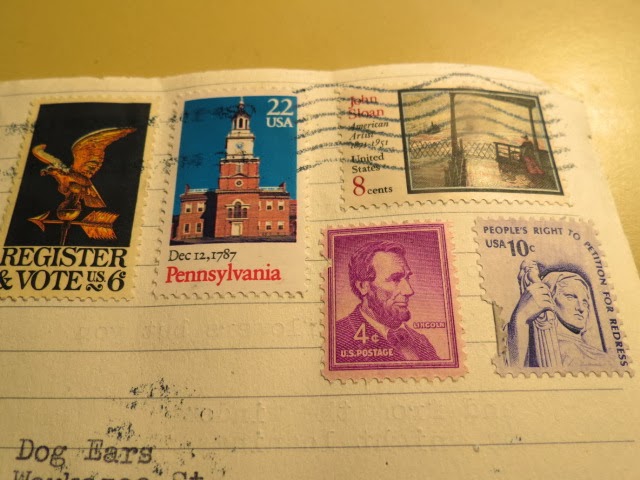 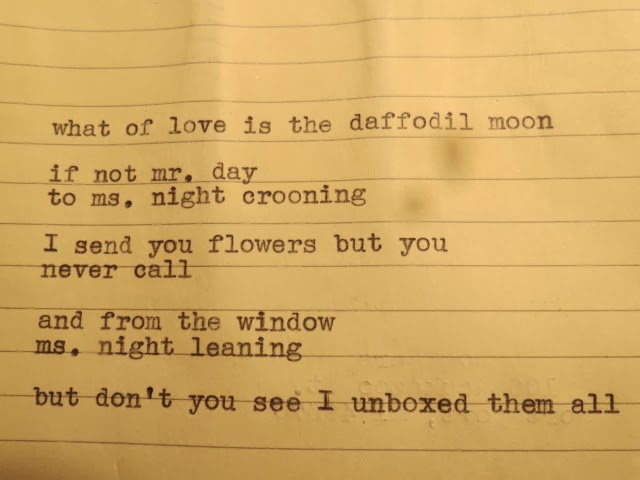 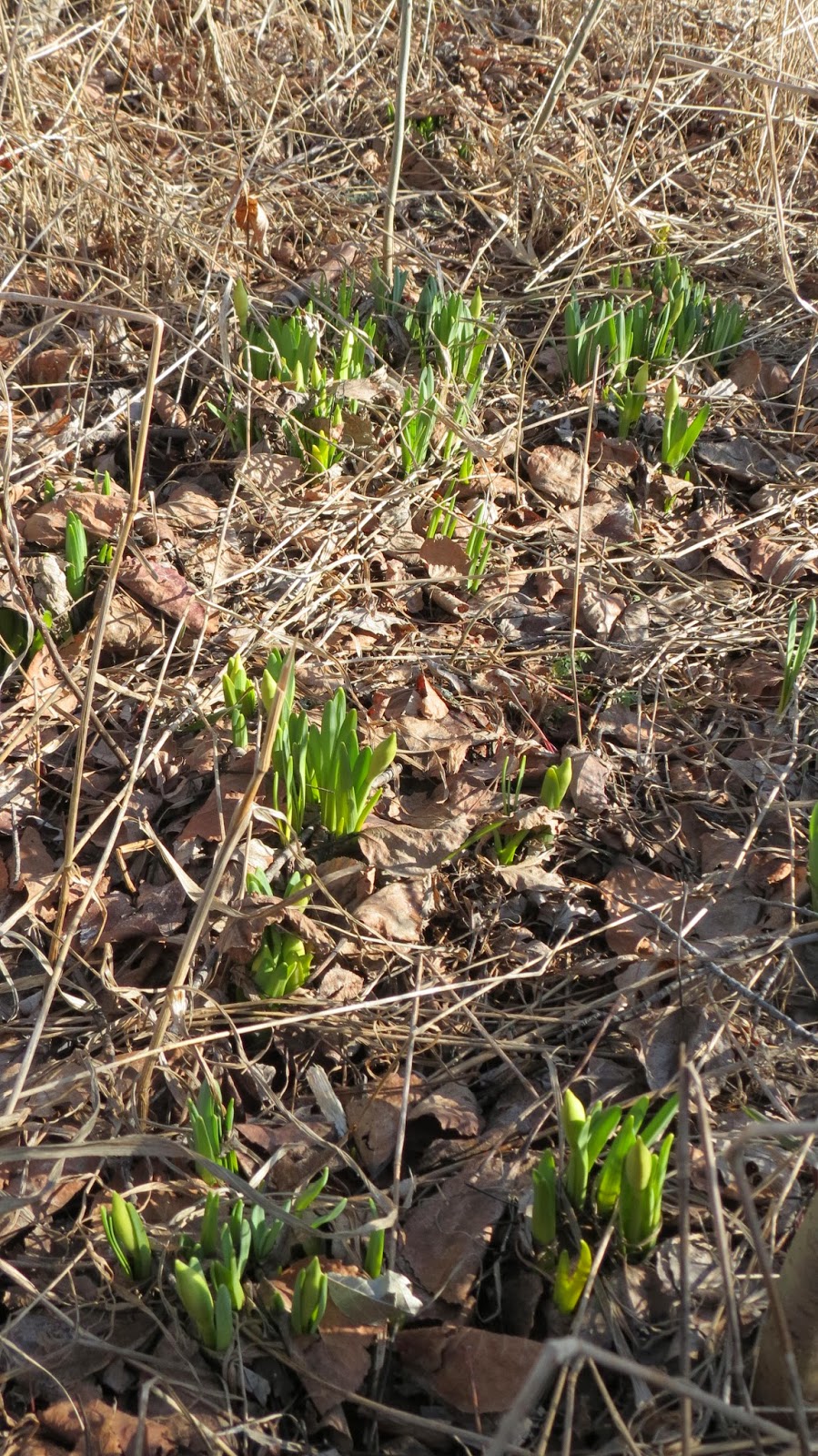 Here's a transcription, in case my photograph is too difficult to read: "what of love is the daffodil moon/if not mr. day/to ms. night crooning/I send you flowers but you/never call/and from the window/ms. night leaning/but don't you see I unboxed them all."

Don’t you love the thought of daffodils on this bitter-cold first March day Up North? At left and below, to complement the poet's offering, is a visual preview in the form of a couple of photographs from last year.

(Honesty compels me to add that last year's daffodils did not emerge until April, but that's not far off, is it?) 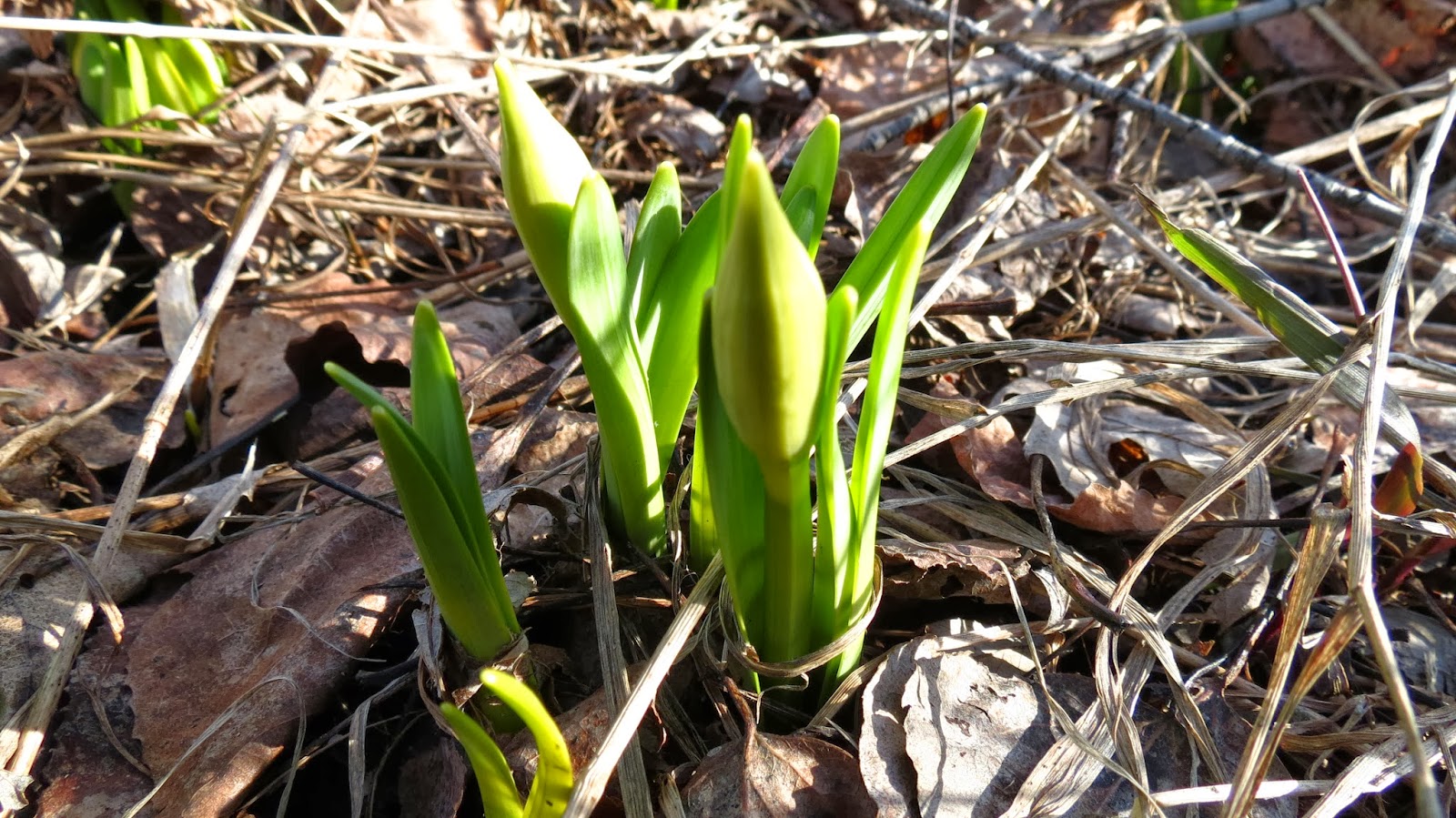 A third surprise came on Thursday morning when I opened my daily issue of Shelf Awareness and saw myself heading the page under “Quotation of the Day.” Total surprise! Thank you, Shelf Awareness and Robert Gray! Thanks for further elevating my bleak winter mood, already given boosts by Cymbre, NWS, and the mystery poet.

Yes, I’ve had worse weeks in my life than the last one of February 2014.

And look at these poor, patient lovelies. 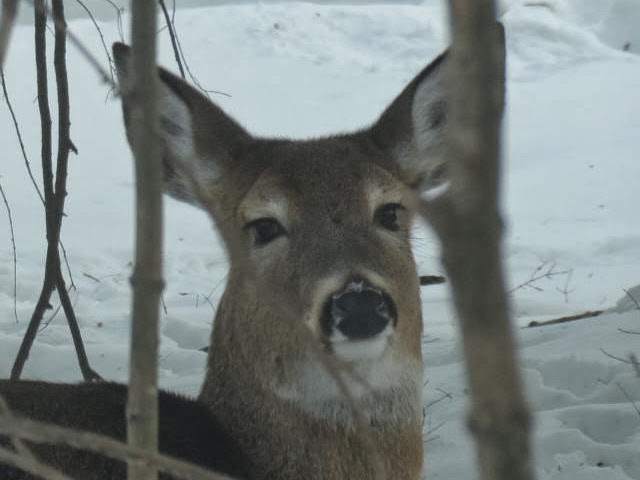 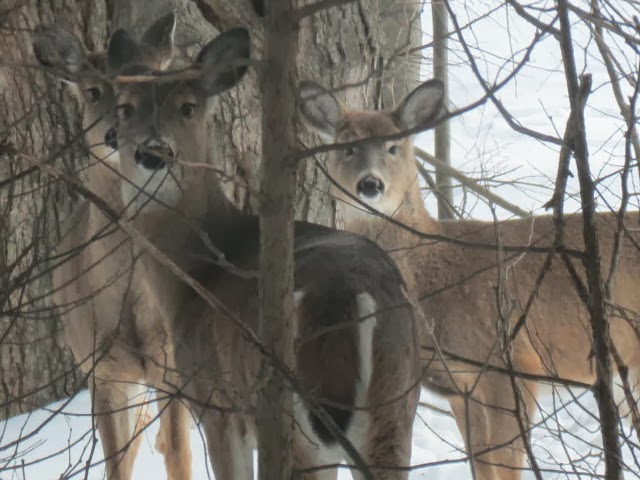 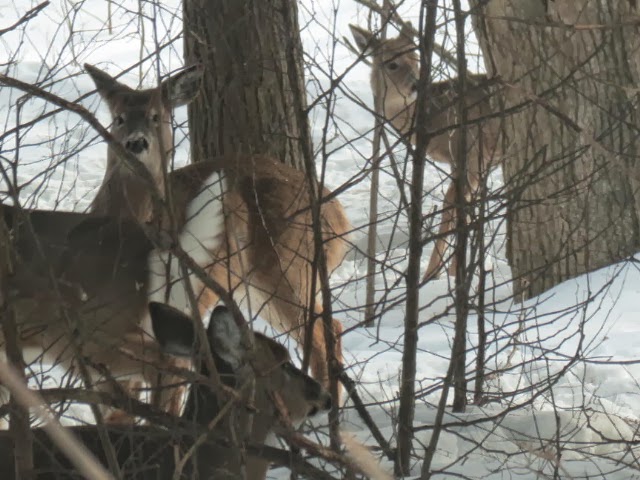 This group of deer has spent most of the winter yarded up in a little patch of woods on the western edge of the village of Northport. Like humans (one young mother, indoors for weeks with small children, told me she feels "like a hamster on a wheel") and dogs (thank heaven Sarah had one indoor play date this week!), local deer have been treading and retreading the same limited ground for the past couple of months. There’s no way they’ll be flying to Florida, and they don’t even have the relief of escaping through books or movies, but do they complain?

Here Up North, do we humans complain? Yes, indeed. This year, just about all of us. But February is past, March is here, and sooner or later we’ll see daffodils -- and be able to walk and run and explore in the woods again, too, Sarah. I promise! Just be patient a little longer.... 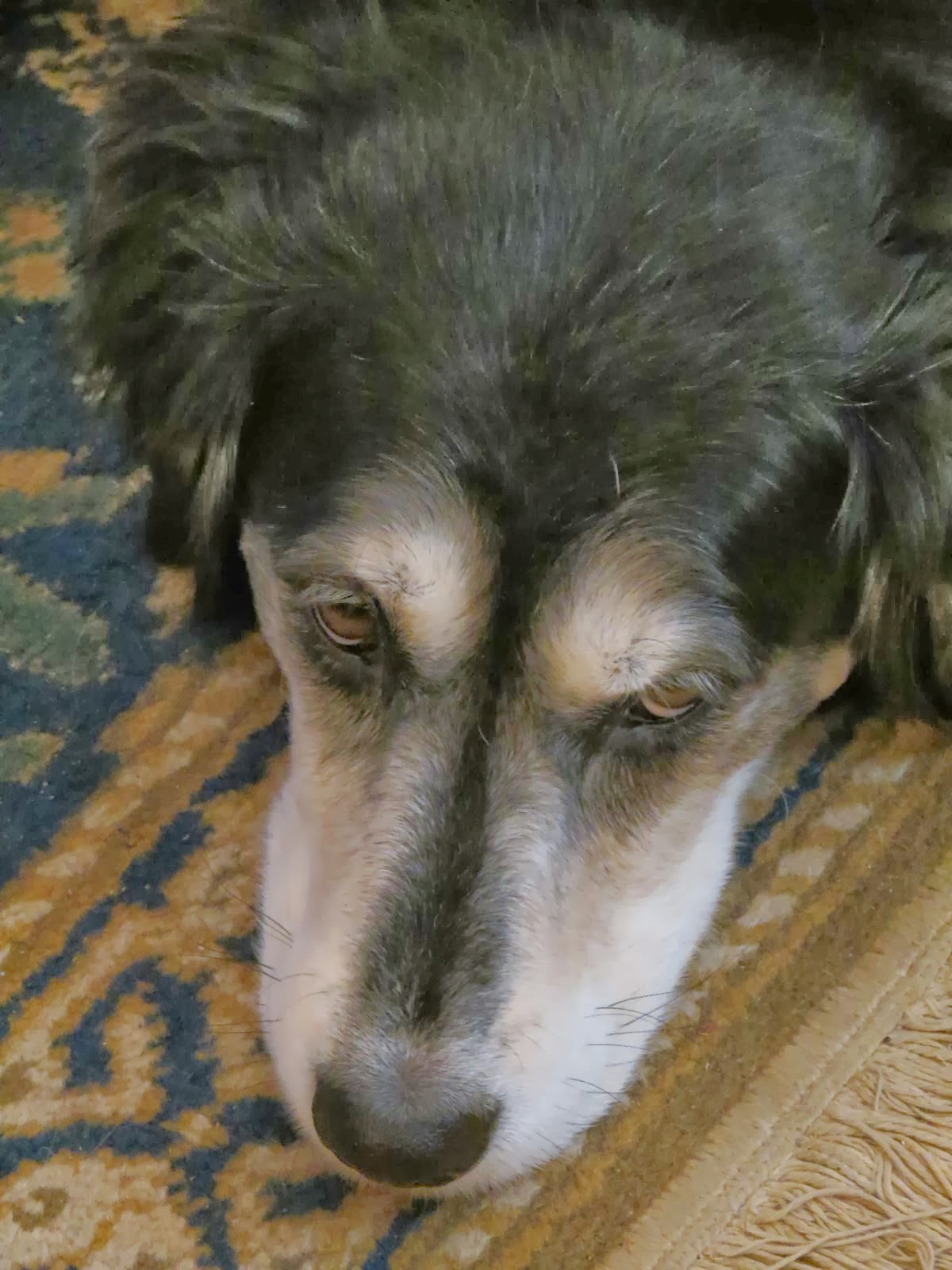 P.S. If the date on this post appears as February 26, that's because I began composing and saving it on that day, and it was just too much trouble to copy the whole thing over again to make the date come out as March 1. Trust me! It is Saturday, and I'm really looking out to a sunny Waukazoo Street on the first day of March as I click on -- any moment now -- "Publish." There!

Wonderful post, Pamela. I laughed all the way through it as you described what we who "stick around" go through. Especially loved the window caption. I'm glad you've had some much deserved good things happen too. Poor deer; they have had to endure so much this winter. Karen

Was it "blow the top of a person's head off" that made you laugh? I hope that came across as funny and not horribly violent. I've loved your photographs of winter deer this year, Karen, and I know those in your yard are fortunate to be there.

I've worried about the deer here too. The other night Katie barked and I raised the blinds. There were two of them, standing nose to nose between the finch feeder and the window...all of maybe 6 inches away. They were not upset by her barking. She was hysterical about them being RIGHT THERE MAMA!!!

Can't wait for a daffodil or two to poke up here...but right now there's at least 3 feet of snow everywhere, covered with a layer of ice. More snow coming tonight.

Channel 4 news anchor said March didn't come in like a lion exactly...more like a cow. Now sure what that means...but it was cute.

I think I am becoming even more eccentric than usual. Clearly it is time to Take Measures, get out and about. It was nice to see all your good news - especially the NWS connection.

I will look forward to summer poetry. Heck, I'll be pathetically grateful for mud season.

March came in like a COW??? I have no idea what that could mean. Looking forward to mud season -- now that I understand, and I second the motion.