A Dickens of a Spring 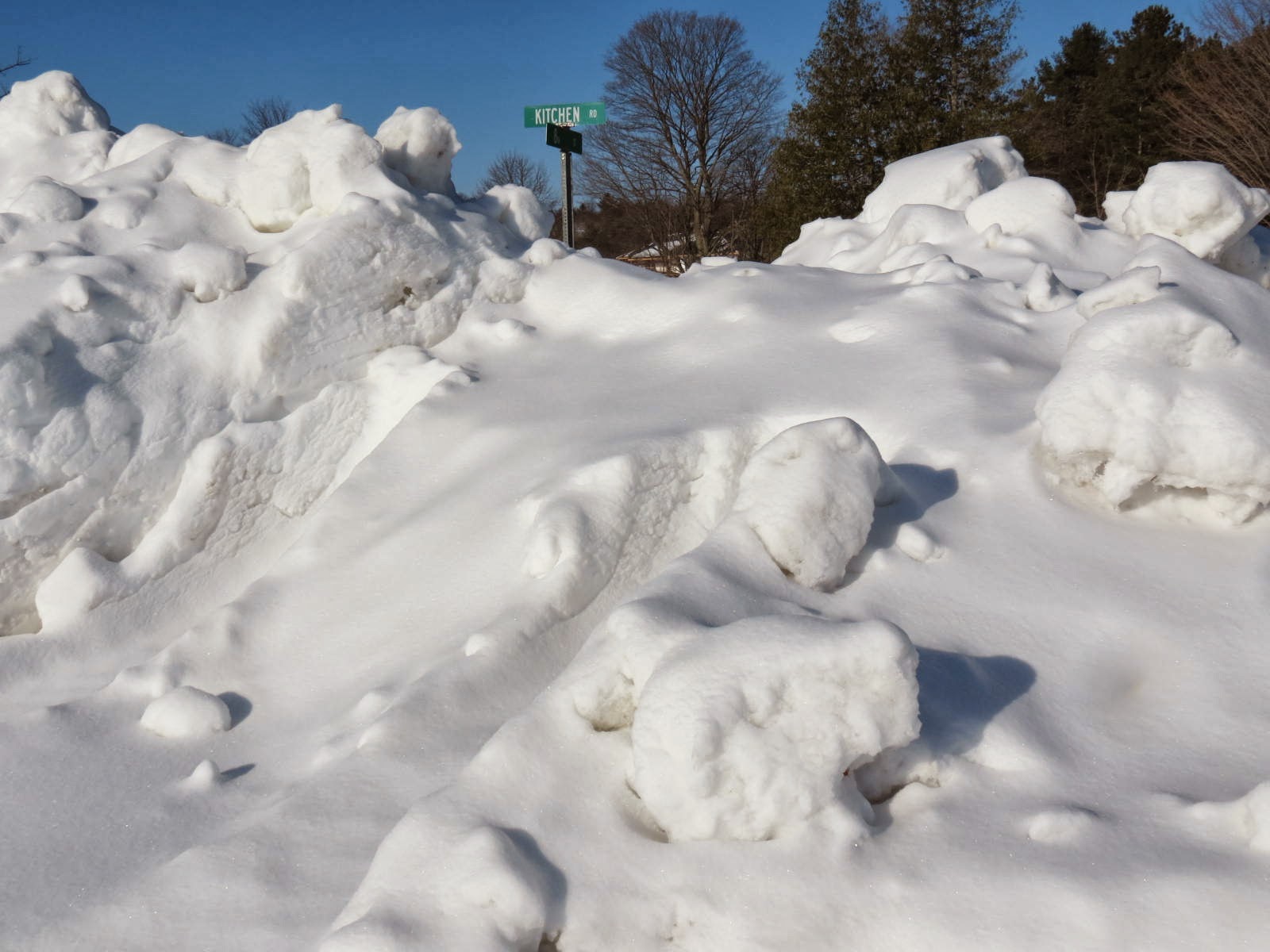 The vernal equinox is upon us, daylight now as long as night’s dark hours. Bright, bright sun! Everywhere the sounds of melting and dripping and running.... And yet – and yet –. Don’t start looking for spring flowers – not outdoors, at least. A more appropriate project would be to organize a betting pool on how long before these mountains of snow will be entirely gone.

But peer closely over the top of that snow mountain out by the corner of the cemetery, and what do you spy? 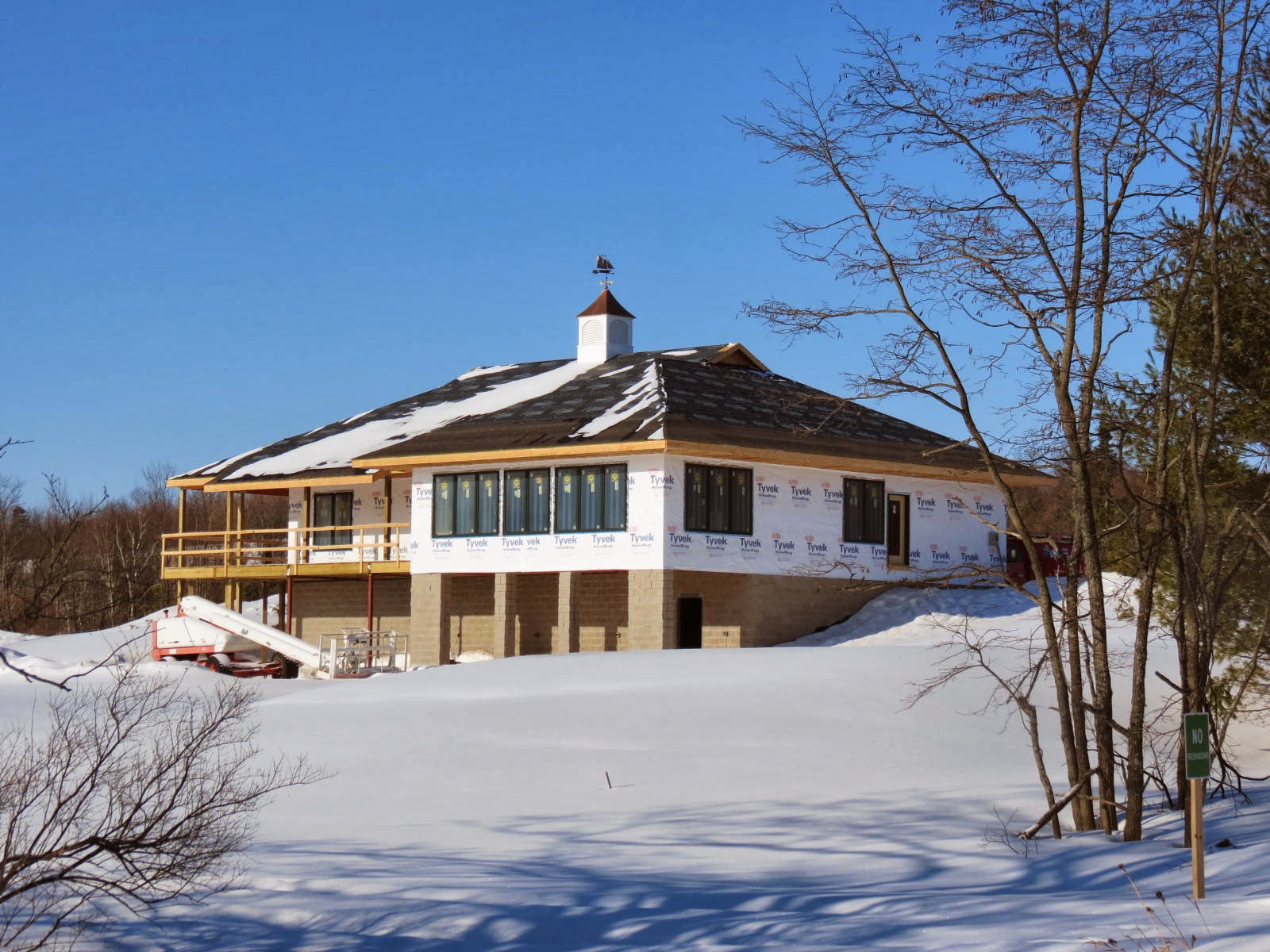 Walking down the old road to the township dump this sunny morning, I was able to frame the new golf course clubhouse in my viewfinder, another Northport building project that’s been quietly going forward through the winter months. Has there been a year in living memory with so many ambitious local projects?

In the village, work on the Galley (will it keep its old name when it reopens?) goes on indoors, but there’s not much outside to photograph. A surprise awaited me on Mill Street, however, with an OPEN sign in the window of Barb’s Bakery again. Apparently Jerry’s winter vacation in Turkey is over, even if Barb’s isn’t. 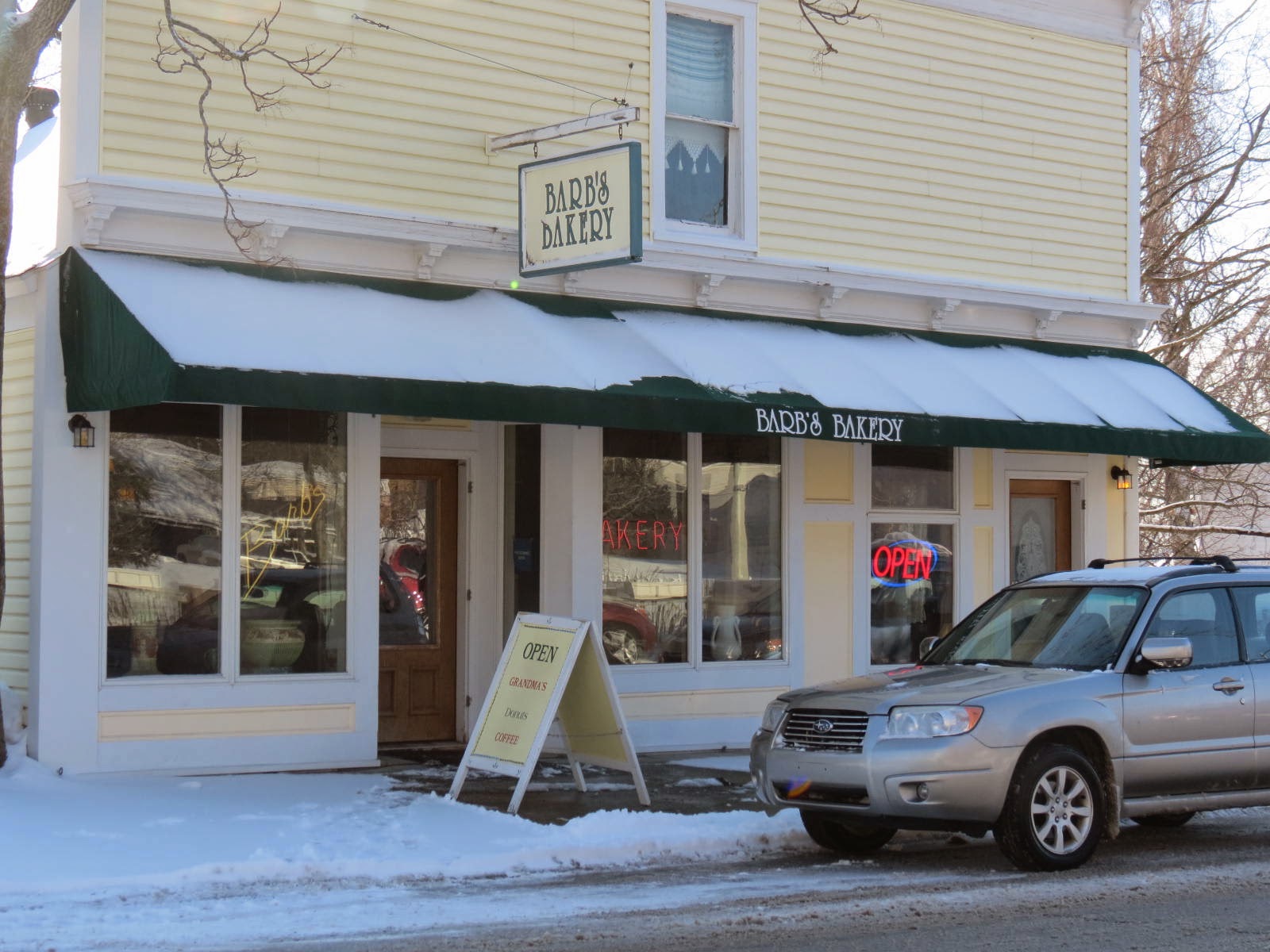 Back here on Waukazoo Street, the Garage Bar & Grill next door to Dog Ears is taking spring break and will reopen on April 8. [I originally posted this date as April 18, but the sign has been more clearly written since then.] Yesterday Lelu Cafe was picking up the lunch slack by offering soup and tamales, though, so slow down as you round the corner and look for a sign on the sidewalk.... 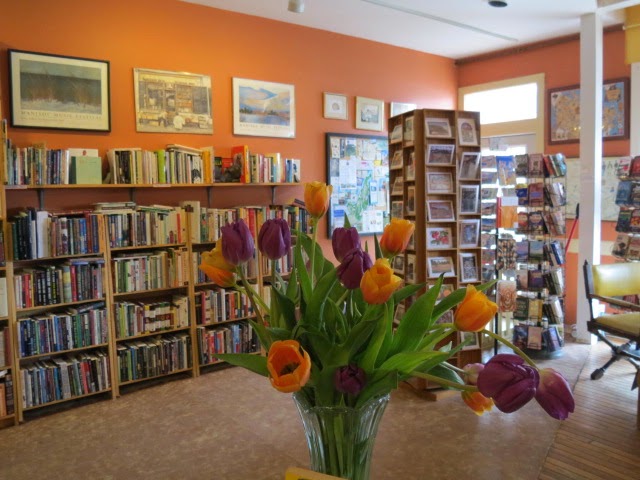 Officially, Dog Ears Books continues on winter hours for a while longer yet. That’s Wednesday through Saturday, 11 a.m. to 3 p.m. Unofficially, I’m often here earlier than 11 a.m. and sometimes as late as 4 p.m., and occasionally the OPEN sign will be showing and the OPEN flag hanging out on a Monday or Tuesday. It is my little world, my treasure island, after all, and I love it. Anyway, it’s too soon to be working in the garden at home or walking the beach with Sarah. 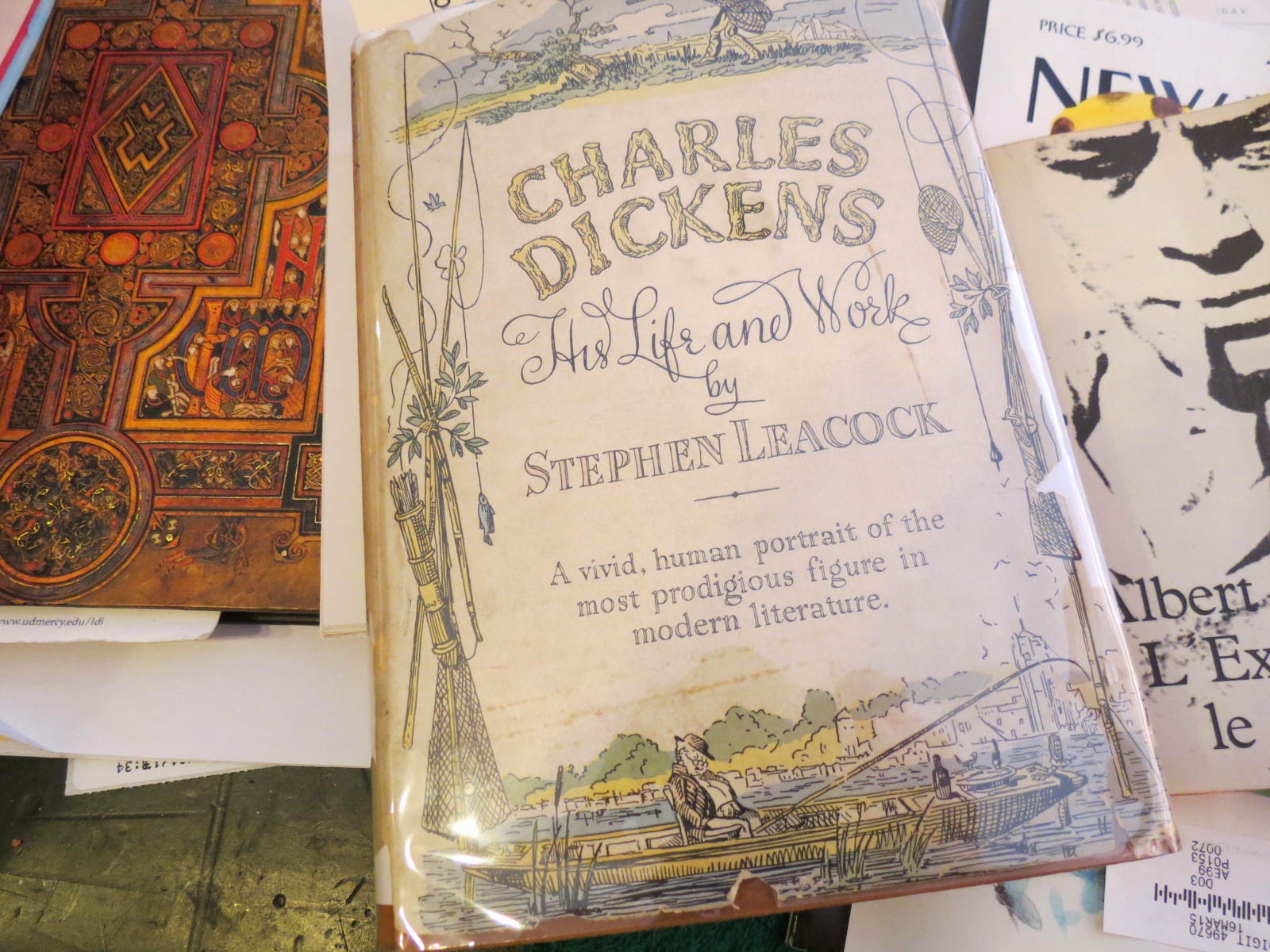 Yesterday I opened a biography of Charles Dickens by Stephen Leacock (himself an enchanting Canadian writer) and fell in its thrall. You know how people have been saying in recent years, “No one reads books any more”? We who read books know that isn’t true, but we do wonder, sadly, if younger generations will ever come to love the books we have loved all our lives. Leacock wrote:

There are many younger people now, so we are told, who do not read Dickens. Nor is it to be wondered at. We live in a badly damaged world. It is a world of flickering shadows, tossed by electric currents, of a babel of voices on the harrassed air, a world of inconceivable rapidity, of instantaneous effects, of sudden laughter and momentary tragedy, where every sensation is made and electrocuted in a second and passes into oblivion.

These lines appeared in a book published in 1936, so it must have been the radio “destroying” the future market for literature back then.

Well, does no one any more read Dickens? On the first page of his first chapter (preceding the lines quoted above), Leacock noted that while the work of other writers might often be read “as a task,” the case was different for Dickens, all of whose books “have been read for their own sake,” for pleasure alone, not for duty. That’s no longer true, is it? Many of my generation were already assigned titles by Dickens in high school and college classes, and that assigned reading continues today, I’m sure. But how fortunate for each generation of readers that Dickens has not been forgotten, shuffled off to the compost heap by radio, television, the internet, and the world wide web! When a friend of mine wanted our little reading group to take on Bleak House one winter, I groaned. And then, what a delightful experience followed! Here is what Stephen Leacock has to say of the central theme of Bleak House:

...The issue of a long drawn lawsuit in the Court of Chancery passing from generation to generation and leaving behind the wreck of broken lives, and wasted hopes--there is nothing abstract or imaginary here. It dominates the story from its sombre magnificent opening in the Court of Chancery setting in the London fog, to the climax of the closing scene when the great suit of Jarndyce vs. Jarndyce ends--like the fall of an ancient building, eaten into nothingness and collapsing into dust. So ends it with the sardonic laughter of the Court, and Richard Carstone, dazed, unhearing, marked for death. The theme has all the majesty and inevitability of Greek tragedy. Round it is gathered every thread of the narration: the bright loves, the broken lives, and the beauty of renunciation stronger than love itself.

But while the theme of this one Dickens novel is taken directly from reality and not from the author's inventive mind, Leacock tells us very clearly, and more than once, that to identify too closely any characters from the Dickens novels with actual individuals in that author's life (and the same is true for any other author of fiction) is to miss the point badly.


Human beings are made of aspects, not of realities. Each of us is such and such things from certain angles and in certain lights. We are many things to many people and show to the occasion and the hour a different aspect of our being. It is the art of genius to seize the deceiving aspects of real people and turn them into the realities of imaginary ones. The act involved is not transcription but creation.

Curiosity led me to open an earlier biography of Dickens, one written by Ralph Straus and published in 1928, and there (again in the early pages) I was intrigued, as a bookseller, to read that “Dickens alone among modern ‘best sellers’ began to be ‘collected.’” So did the whole book-collecting field of Modern Firsts begin with Dickens?

Straus found Dickens more interesting than any of his characters. I’m not sure any novelist would take that as a compliment. Leacock, if asked, might reply that Straus has posed a false dilemma, for Leacock wrote:

Of school he had but little; of college none at all. The early flowering of his boyish genius received neither encouragement nor recognition. If he was precocious, there was none to know it. A little boy reading in an attic his tattered books – who cared for that? A child in an agony of humiliation at his lot as a little working drudge – who was there to notice that? In all the pictures drawn by Dickens, there is none more poignant than the picture of little Dickens himself. The pathos of little Oliver, of Tiny Tim, and little Paul is drawn with a sympathy that sprang from the childhood experiences of Charles Dickens. 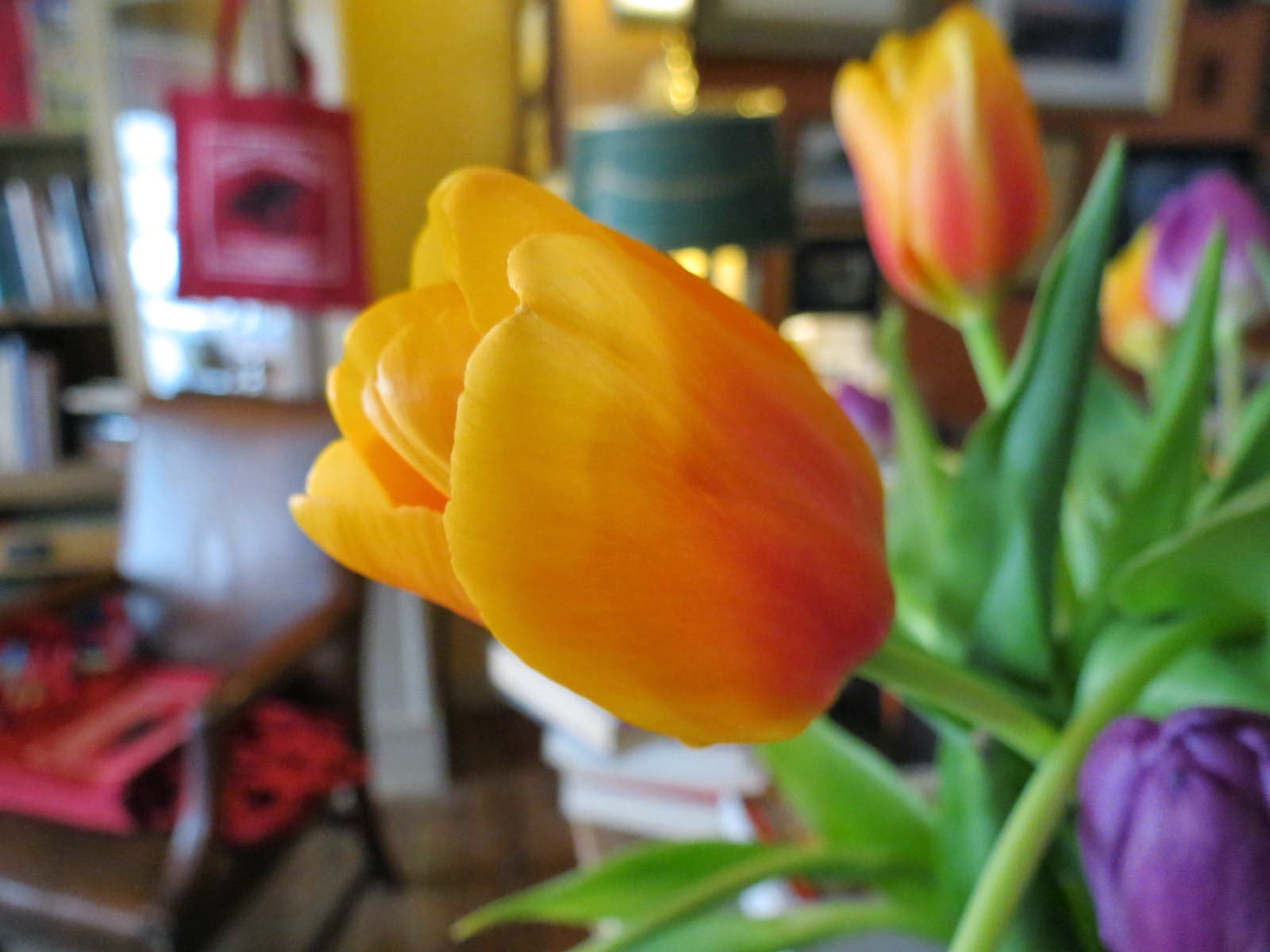 At home I’m reading a fascinating travel memoir by Norman Lewis but did not allow myself to bring it to the bookshop today, as I had reached an ideal stopping/starting place and promised David I would only take the book up again to read aloud in the chapter where the author makes a trip to Cuba to visit Hemingway. But more about that another time. Right now I need to give my tulips fresh water....

Miss all these musings! In person, that is. Without Dickens I would have had no image in my mind of Miss Havisham's wedding cake, wrapped in cobwebs.

There's a lot to be excited about in Northport. Thanks for continuing to be our village pulse. Karen

I'll be writing more about Dickens soon, as I am enjoying immensely the biography by Stephen Leacock, a delightful writer himself. And Northport, as long as I'm here, will continue to be one of my frequent subjects.

Is there a seasonal impact on the book selling business? I'm thinking a long hard winter might
bring more customers. Our lilacs
are leafing out, the pussy willows
all fuzzy and I changed the oil
in my lawnmower, but the cat still seeks out the sun spots
in the house.

BB, I'd be hard put to think of any kind of Up North business that is NOT seasonal. This winter has been great for the snow plowing business and sellers of heating fuel, but for the majority of businesses in northern Michigan, dependent on tourism and agriculture, summer IS our season, and that's certainly true for bookselling. People who live here year-round and can't afford to escape the winter by going South may flock to the library during the cold months, but only my most faithful local customers come in to browse or order books. Maybe once a week there will be a few people from Traverse City or beyond -- sometimes from as far away as Indiana or Pennsylvania -- and they are enchanted to find a bookstore open on a cold winter day Up North.

I also wonder about the kind and quality of reading in the future, the need to slow down and stay with the page. Winter this far north helps with that. Is that why we're here?

Nice try, Fleda, but I got a ton of reading done in Florida four years ago and am heartily sick of single-digit temperatures -- continuing into March? The reading, however, is some consolation, and I hope my future, wherever it may unfold, will have plenty of slow hours to spend turning pages and visiting other world.