Vacation on Manitoulin Island (with the Old Dog)

On September 21, 2006, we crossed the bridge from Espanola, Ontario, to the town of Little Current on Manitoulin Island, where we had reserved a cabin (#4) for four days on the shore of Lake Manitou, outside the village of Manitowaning, at an old-fashioned resort called Wee Point. Here are a few selected travel notes from that Canadian vacation seven years ago.

Down the road [I explore with my dog], clambering over hills and dips in tree-surrounded, rock-strewn pasture, where lifeless black surfaces break through the earth’s skin blossom with lichens, mosses, grass, wildflowers, and seedlings. From somewhere off in the trees comes a loud “HONK!” low and singular. Cow? Moose? Nikki is excited and wants to run [but must stay on leash because of cattle]. ...

David puts up with the absence of television. I put up with radio news and music. He misses movies, and I plot to escape current events. I only want Little Current! And cattle. And the heartaching colors of fall. The idea of lynx and moose and bear.

I read to David in bed from Hamlin Garland’s Son of the Middle Border, and the passage of Garland’s first trip “to see the world” (Minnesota and Wisconsin and South Dakota), traveling by train, staying in hotels, and writing letters to friends back home in Iowa, reminds me of myself and my continuing excitement over the myriad small novelties discovered away from home: “A landscape is precisely as great as the impression it makes upon the perceiving mind. I was a traveller at last! – That seemed to be my chiefest joy and I extracted from each day all the ecstasy it contained.”

I had to carry Nikki over the cattle guards at the gates, but she was interested in the smells and eager to explore. Out at the main road I went left (north?), and there they were, a long line of them, different ages and different colors (grade cows?), passing through a gate in single file and dispersing into the rocky woods. Along the fence was sumac halfway gone from green to red, dry seedheads of teasel, a volunteer apple seedling amid a riot of fall flowers, mostly asters and goldenrod. Sumac “on fire” warms the soul on a chilly morning. So do lowing cattle in an orderly procession, all on their own with no need to be driven.

Coming back from another dog walk later in the day I met Pat, who owns Wee Point along with her husband, Jim.

As I’d imagined, Jim did paint the resort signs and lawn furniture and shutters on the cabins. Made them, too. From Manitowaning, he sailed the Great Lakes for 17 years, then got a license and ran an auto shop. Pat grew up in Little Current. They married in 1967.

Pat thinks the cattle are particularly noisy because calves have been taken recently from their mothers, but she also says there was no big annual auction this year in Little Current. [Historically, the economic base of the island has always been feeder cattle and tourism.] The tornado in July (talked of in South Baymouth today when I was buying postcards) damaged the auction buildings too badly, and also the organizer of many years died.

A woodpecker landed on a tree behind Pat. She said a recent guest had asked if one woodpecker were a pet, saying, “It seemed to want its picture taken.” A farmer owns the land between the gate at the road and the gate into the resort. ... The painting on the outdoor chairs and tables, as well as a small coffee table inside, is bright and gypsy-like. “Diamond Jim,” he was called, and the shutters (each cottage with its own motif) all have a diamond somewhere in the design.

On 9/14, after a day of exploring to Kagawong and back, I write:

Still here, I anticipate already my future longing for this island. It’s hard to believe that two days [spent here] two years ago produced such an attachment that I felt wrenched away when we reached the swing bridge at Little Current and I had to say a very unwilling good-by.

“Burnt” bacon for breakfast, per David’s request, fills the cabin with smoke, and we take our plates outside to the lakeside picnic table. On our way out the drive later, going to town on errands, David starts in explaining cross-ventilation to me for the millionth time, and I interrupt to tell him I already know, and we both start laughing so hard he has to stop the car.

In Manitowaning, what we had taken to be a bank turns out to be the Liquor Control Board of Ontario. We find a Bank of Montreal sharing a building with the post office, and there I change $50 before doing a small shopping at the Fresh-Mart. Because the used bookstore at Burns Harbor doesn’t open until noon, we find ourselves back at the Muskie Widows Tavern for coffee out on the deck, to the accompaniment of a welder roar and rumble from a construction site across the street, where a metal pole barn is being added to a lovely old limestone block building. The welder noise bothers David not at all. “This is perfect,” he says contentedly. “Cooling our heels here, waiting for the bookstore to open.”

Can this be called “travel”? It’s the way we like it – not doing anything special, just hanging out and feeling at home in a place far from home. No plot, no conflict, no suspense.

On our last Manitoulin morning, cattle appeared to bid us farewell.

One beautiful, big, cream-colored cow stretches her neck up gracefully to reach and nibble popple leaves. Her ears hang down sweetly. She walks off into the trees and emerges on the road in front of us, then strolls down the road, free of all concern.

Later, on the mainland, looking north at a low cloudbank that rests over the LaCloche Mountains (the La = the the?), I notice that the mountain rock has the same color range as the cattle we have left behind – white and cream and gold and brick red.

In the sunlight, the same colors as the cattle, the rocks look warm, not cold. Like animals, they invite the human hand.

Sorry for lack of photographs. I searched high and low and found many other files from 2006 but nothing from September.

My search through old photo files did, however, turn up beautiful, sobering images of Up North spring that counter a claim made by one of our friends the other day that we are “halfway through winter.” Here are a couple reminders of winter-spring not long ago. First, here's March of 2012: 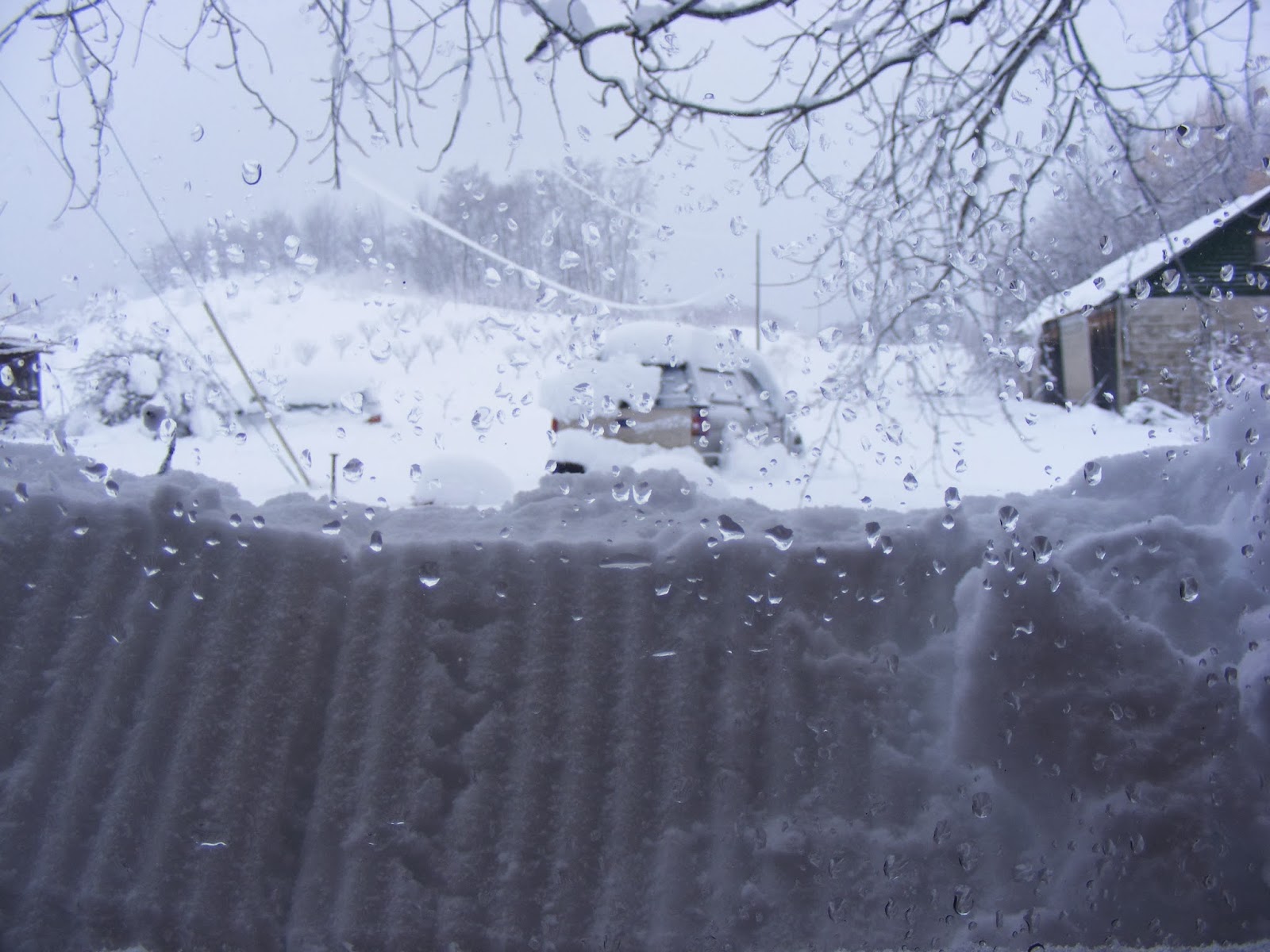 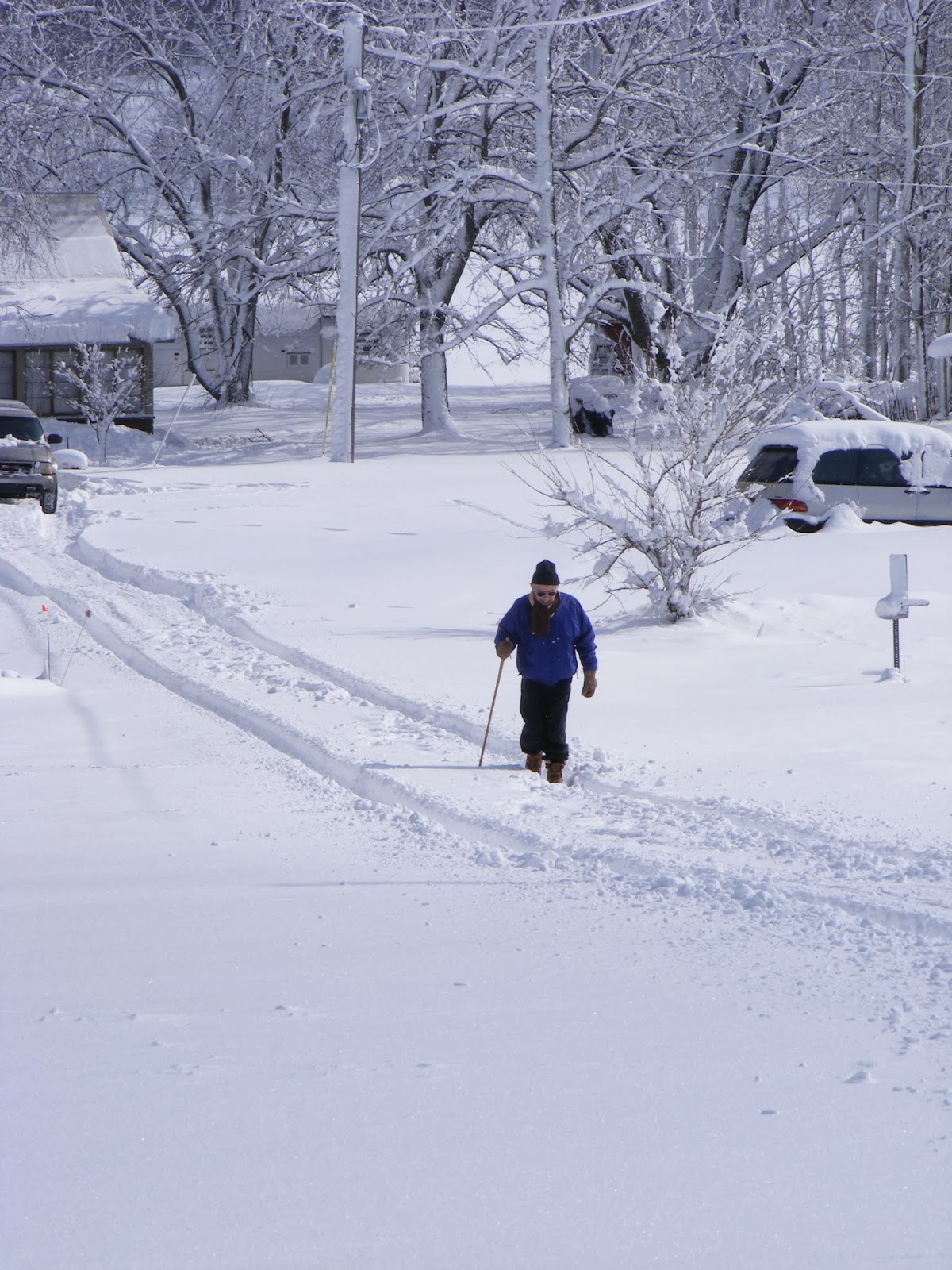 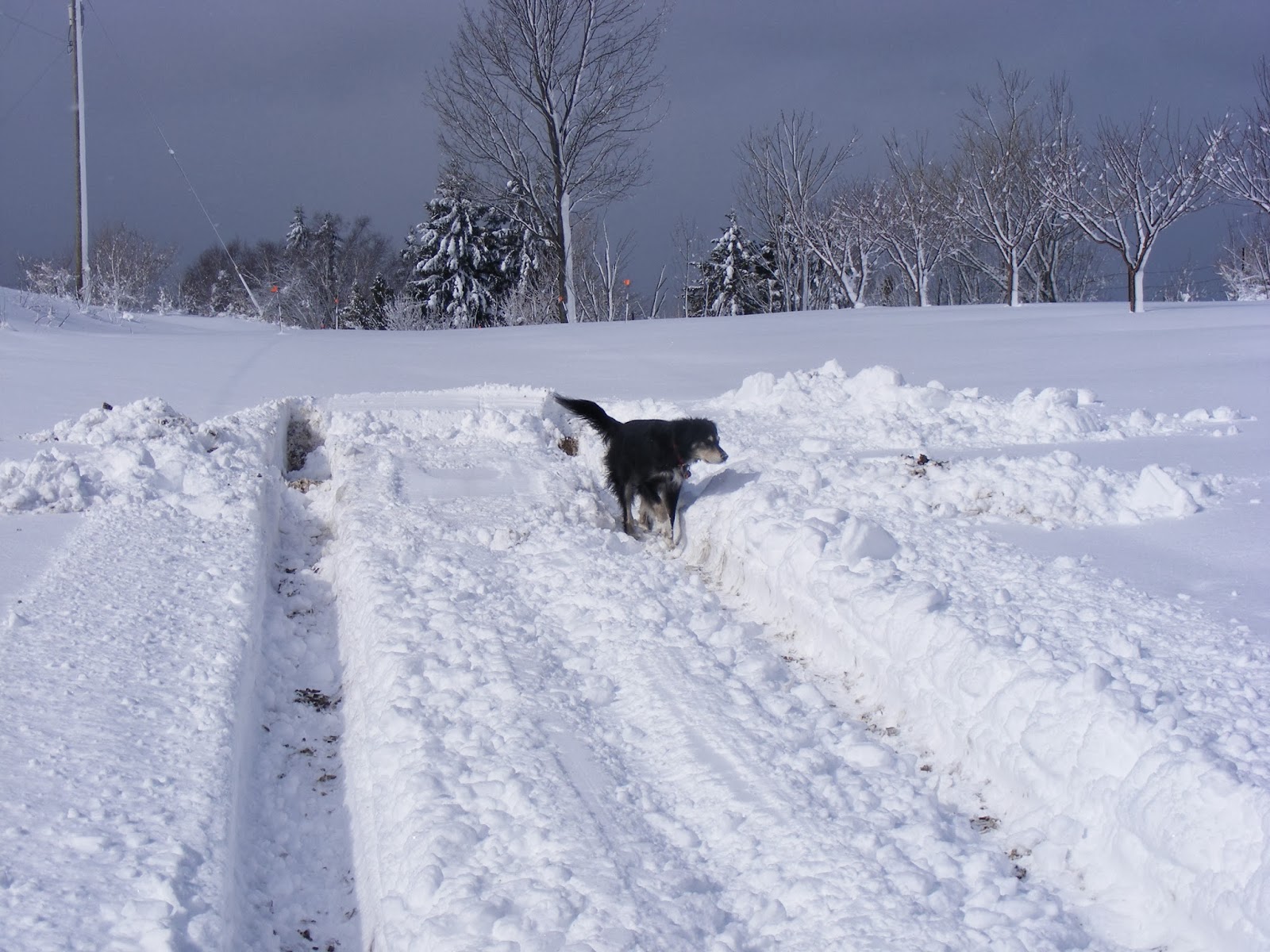 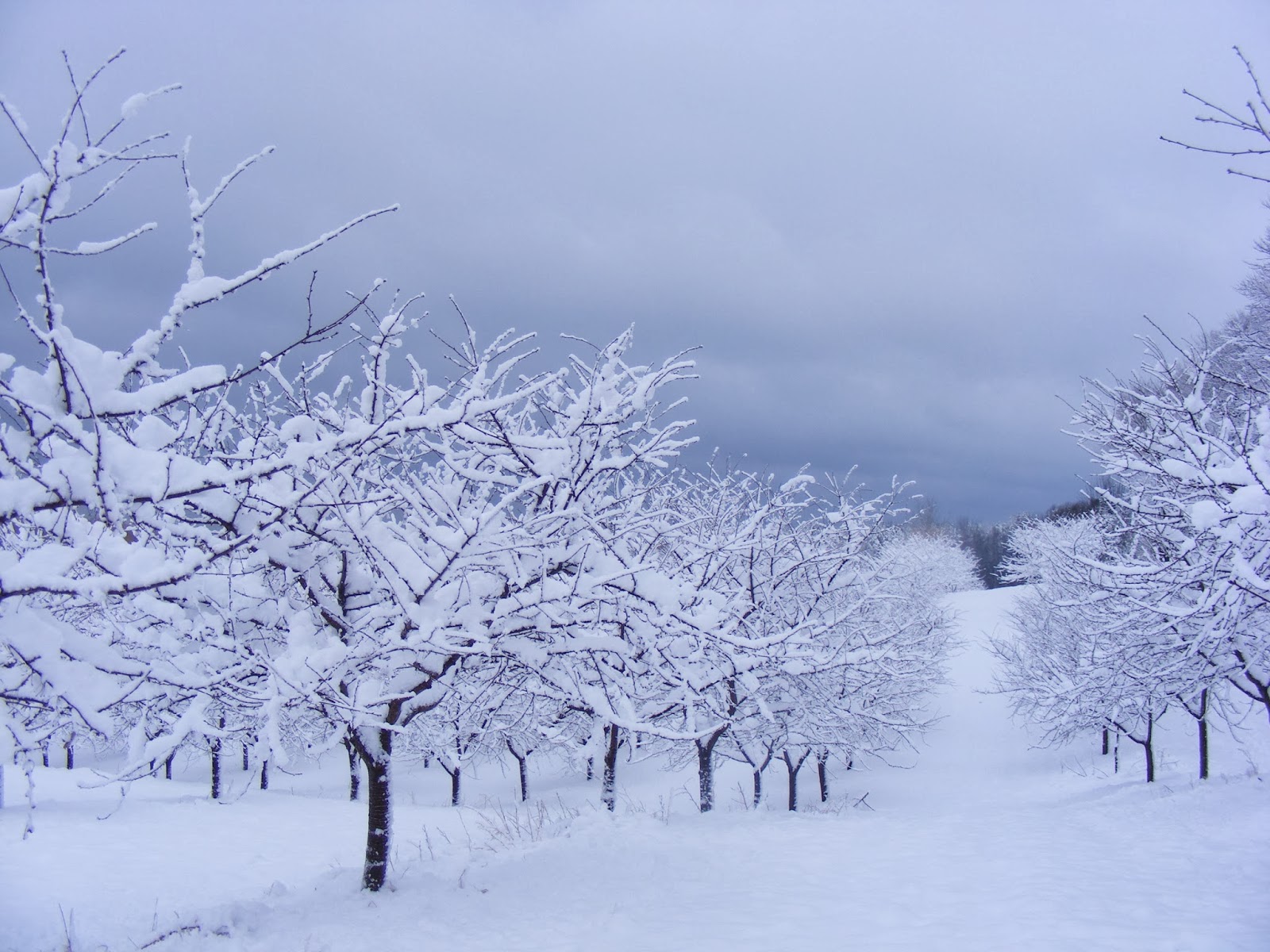 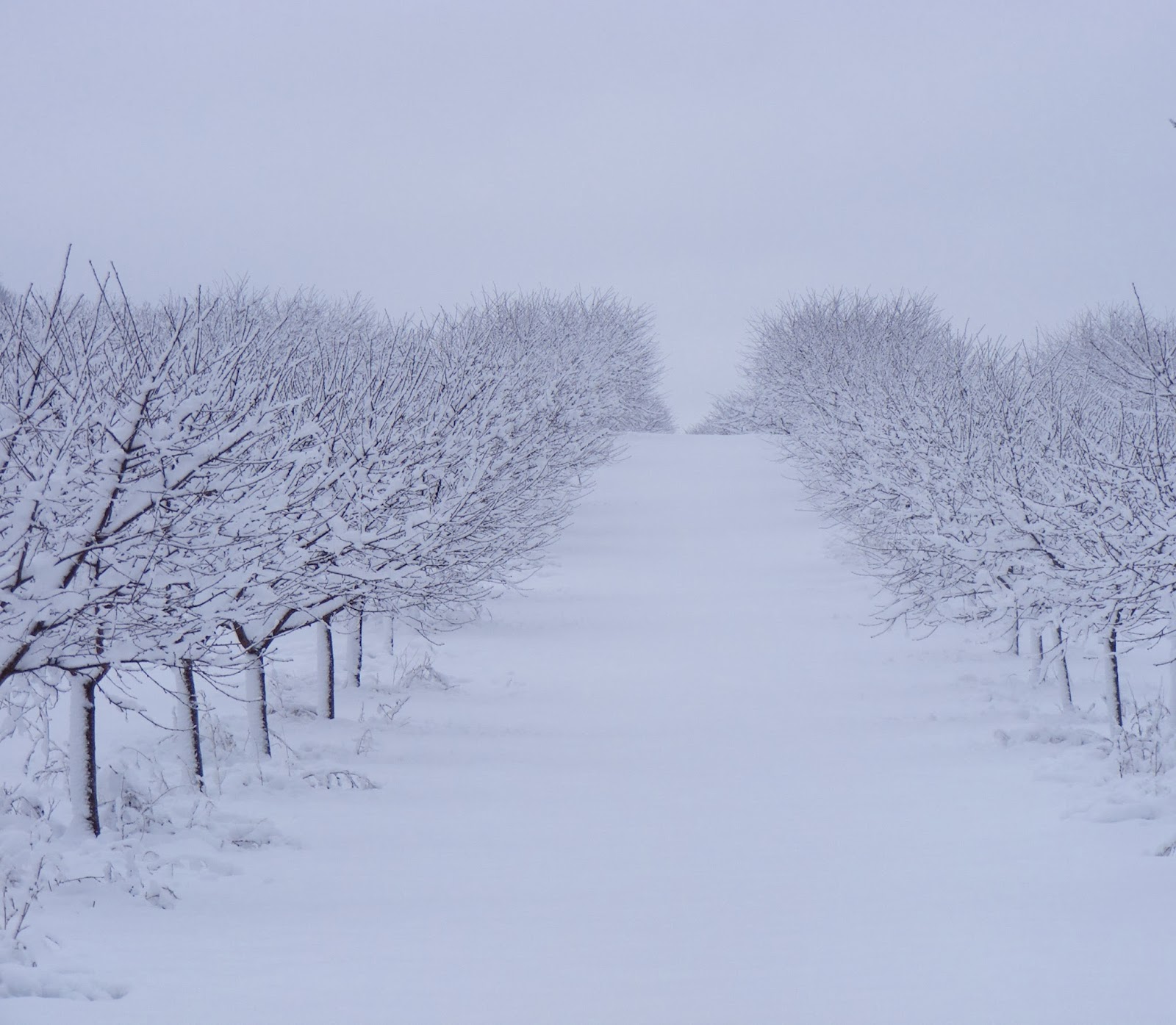 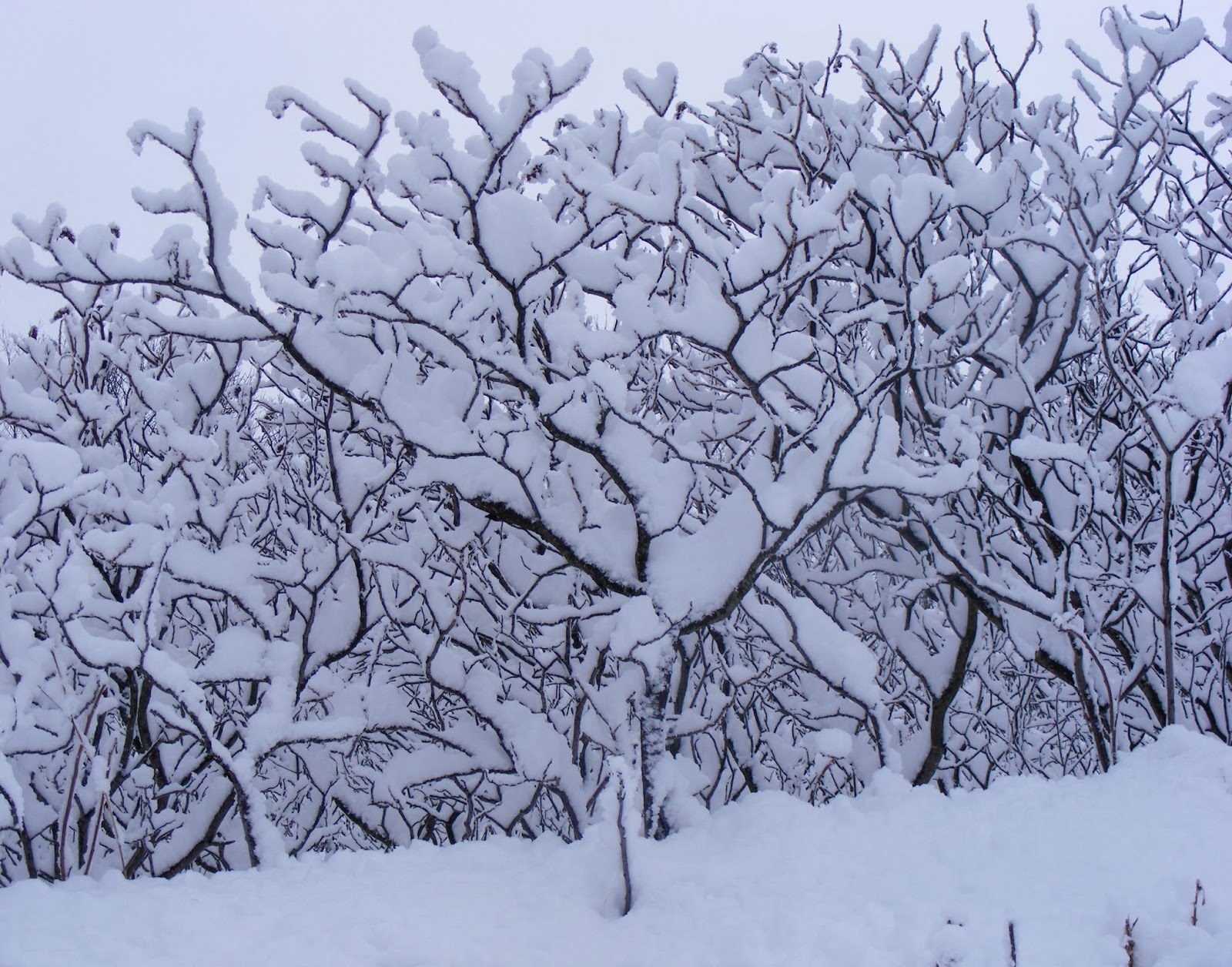 On the other side of the coin is that four days after the four snowy photographs above were taken, the snow was gone, and I found these little flowers in the woods, Sunday (Easter Sunday), April 24, 2011: 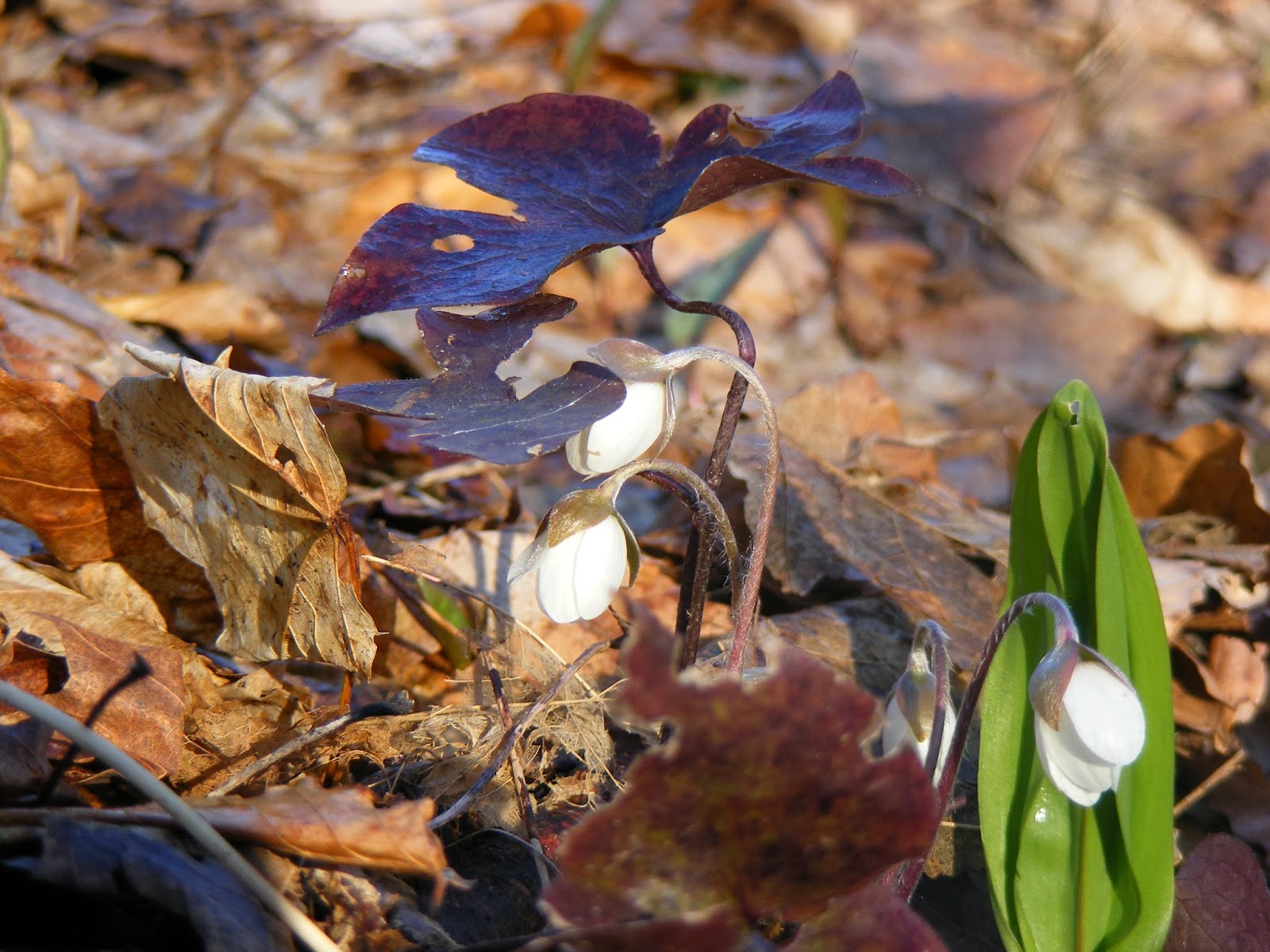 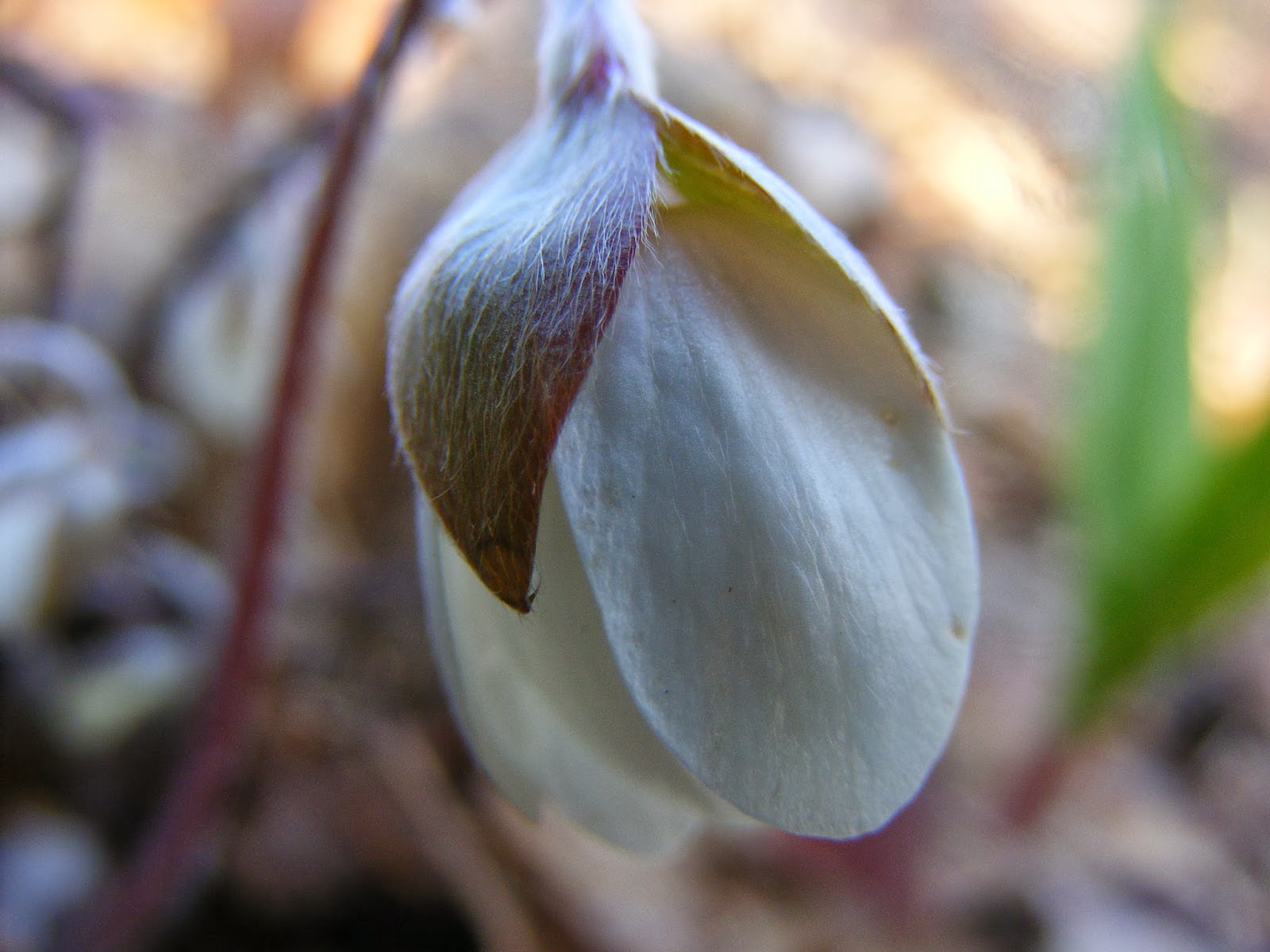 Now, wouldn't you rather look at those woodland wildflowers than at more pictures of snowdrifts today in my farmyard driveway?

4:15 p.m. Coming back to add a p.s. to say that I have updated my other blogs today, also -- the photography blog, the drawing blog, and the one where I rant about all kinds of miscellaneous stuff. Warning: If you read the last one linked there, it may blow the top off your head!

PJ, I kind of liked that there were no photos of your 2006 adventure because I got to imagine it. Such a lovely spot, I hope you get to visit it again! And I agree, I'd rather look at wildflowers than more snow, as it will snow here again, and there too I suppose, many many more times before we reach spring.

We sail out of Little Current every summer and have explored a lot of the area from the water. So nice to read about it in the midst of the winter... but I never tire of the wonderful snow pictures!48244228

Good morning, Pamela. I see you have the new book by Elizabeth Buzzelli. Will you be having her in for a signing? Karen

Dawn, actually I liked the contrast between the snow and the wildflowers -- and especially appreciated realizing that in April 2012 there were only four days between the photos looking like winter and those looking like spring.

Barbara, the couple of times we've gone to Manitoulin David always says we can't really know the island without a boat to see it from the water, but another friend of mine who has only been there as a boater says she knows nothing of what it looks like beyond the coast and the harbors. Anyway, we all agree it's beautiful, right?

Karen, I will indeed be having Elizabeth at Dog Ears for a signing, and in fact we are talking about having TWO events -- one in the summer, with just her book, and another in the fall when Lynne Rae Perkins will have a new illustrated children's book about squirrels coming out. The fall event will be a squirrel-and-nut fest! Doesn't that sound like fun?

I love this glimpse of Manitoulin Island and especially the moment where you laughed so hard you had to stop the car.

I am anticipating my travels to many Great Lakes islands this year!

Loreen, I'm counting on you to bring me up-to-date on the state of the feeder cattle industry on Manitoulin Island. I hope it's still going strong.